The luxury Italian watchmaker Panerai began as a humble watch retail and repair facility opened by Giovanni Panerai (1825–97) in Florence in 1860. By the early 20th century, it had established itself as a major supplier of seaworthy timepieces for the Royal Italian Navy. Radiomir, which references the radium that was used on luminous watch dials, was the foundation of the brand’s technically brilliant and visually distinctive watchmaking, patented by Panerai in 1916.

In 1936, the first Radiomir watch powered by Rolex movements was presented to the Royal Italian Navy’s First Submarine Group Command; this design would go on to become one of the brand’s most iconic models with its luminescent numbers and large cushion-shaped steel case (Panerai’s name, which is well-known to contemporary watch collectors, is now essentially synonymous with behemoths up to 50mm). Since then, the brand has introduced numerous models inspired by the ocean and to meet the utility needs of the Navy. The Mare Nostrum model, which debuted in 1943, was a two-counter chronograph designed for deck officers. The self-illuminating material Luminor was patented in 1949 and replaced the radium-backed Radiomir, with the 1950 Luminor watch model featuring a crown-protecting bridge, now one of Panerai’s most distinctive design details.

In 1993, Panerai introduced its watches to the wider public with three series — the Luminor, the Luminor Marina and the Mare Nostrum — reimagining its historical models. The company continues to innovate, celebrating its 70th anniversary with a water-resistant diving watch with a luminescent dial inspired by French free-diver Guillaume Néry.

Today, Panerai is on the cutting-edge of watch sustainability, with the Panerai Ecologico initiative including the almost entirely recycled Submersible eLAB-ID watch and a series of Luminor Marina models composed of a recycled-based steel alloy. Panerai manufactures its high-end, hand-wound watch calibers in a Swiss facility that opened in 2002, combining Swiss technology with its core elements of Italian design and a long, storied connection to the sea.

Iconic Designs from Panerai
Explore timeless pieces that have earned their place in history. 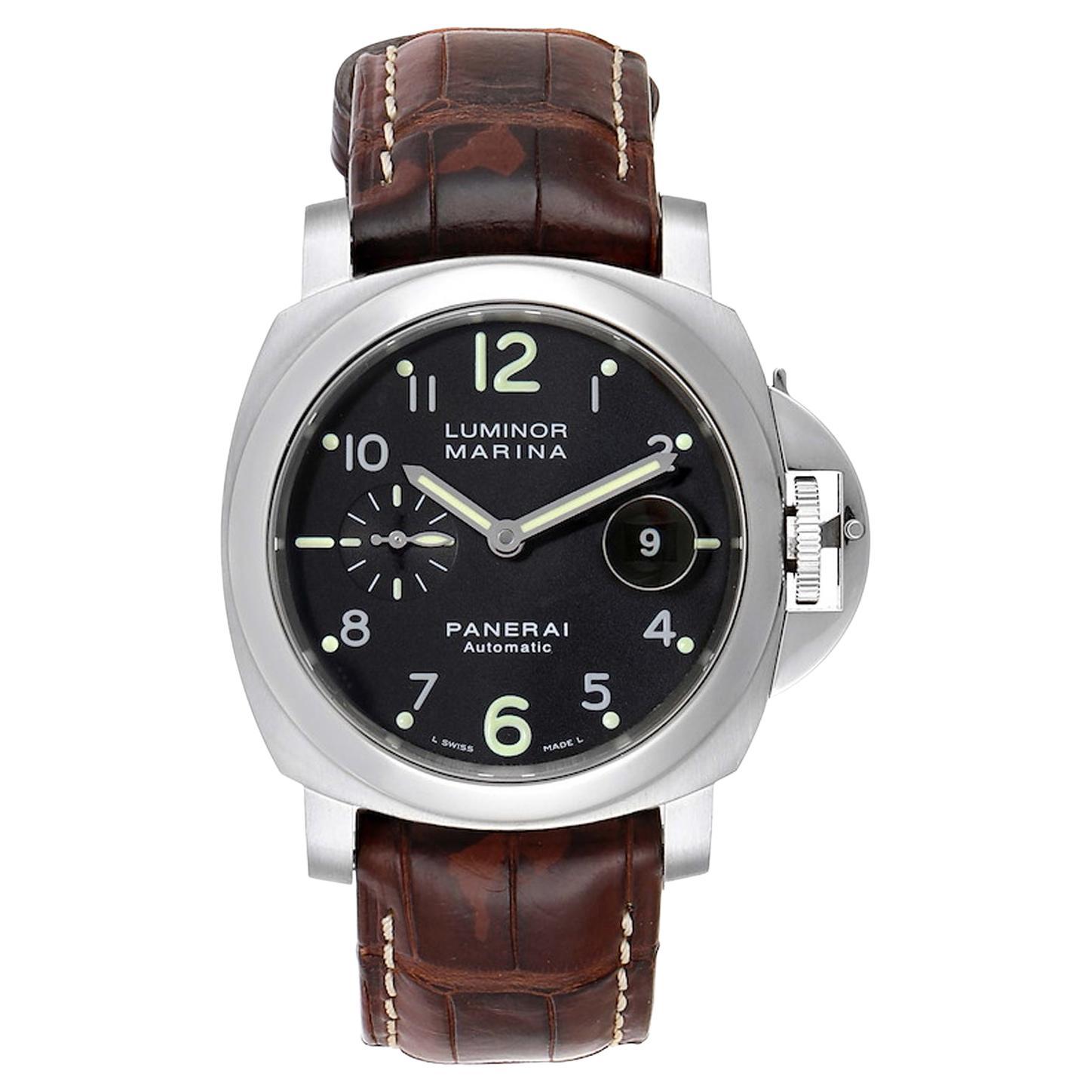 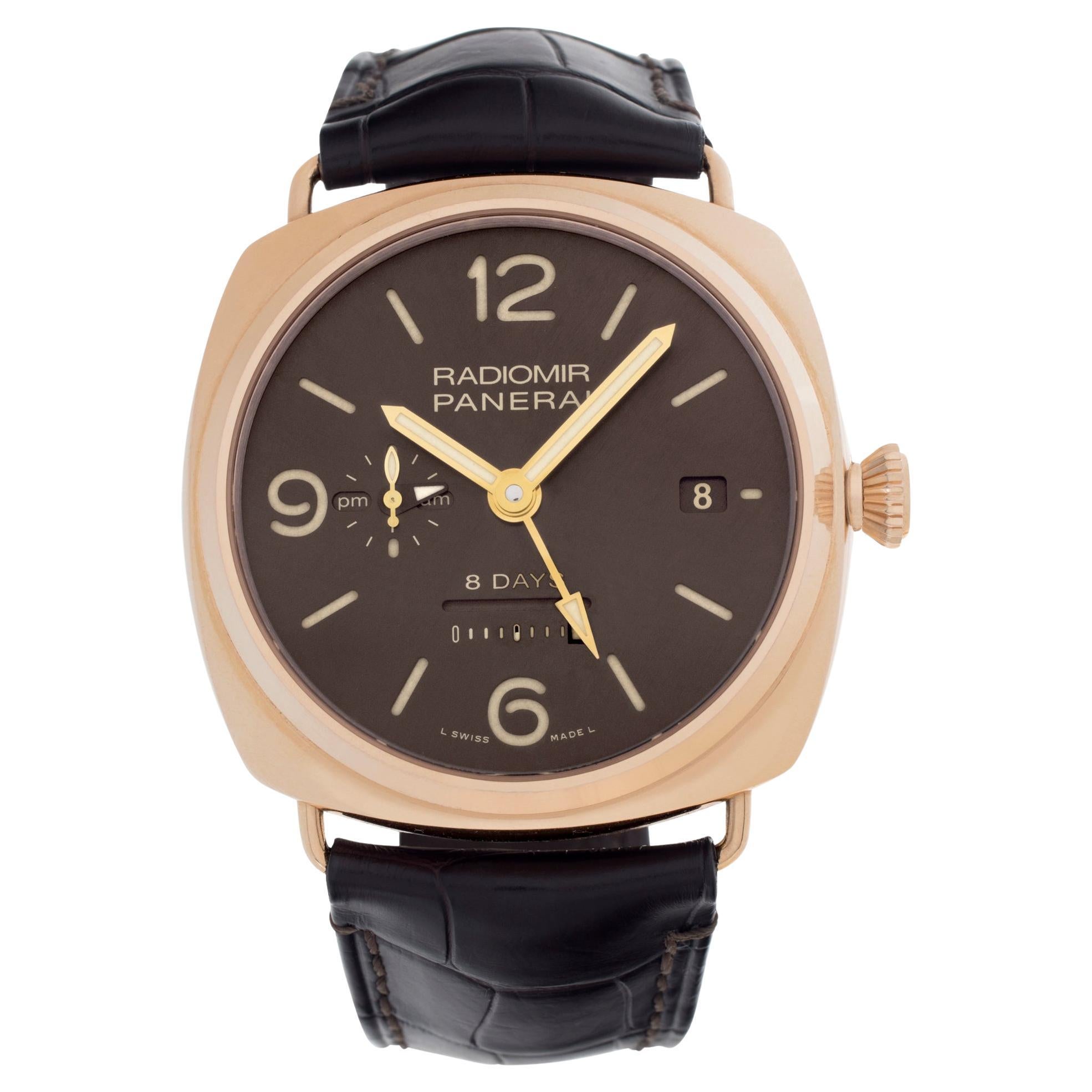 Panerai Luminor Marina Steel Gray Arabic Dial Automatic Mens 2001 Watch PAM00086
By Panerai
Located in New York, NY
This pre-owned Panerai Luminor PAM00086 is a beautiful men's timepiece that is powered by mechanical (automatic) movement which is cased in a stainless steel case. It has a round sha...
Category

Panerai Luminor Marina Satin Blue Dial Steel Automatic Men’s Watch PAM00120
By Panerai
Located in New York, NY
This pre-owned Panerai Luminor PAM00120 is a beautiful men's timepiece that is powered by mechanical (automatic) movement which is cased in a stainless steel case. It has a round sh...
Category

Panerai Luminor Marina Satin Blue Dial Steel Automatic Men's Watch PAM00120
By Panerai
Located in New York, NY
This pre-owned Panerai Luminor PAM00120 is a beautiful men's timepiece that is powered by mechanical (automatic) movement which is cased in a stainless steel case. It has a round sh...
Category

1stDibs offers a range of Panerai jewelry and watches. These unique items were designed with extraordinary care, often using stainless steel. This collection contains 129 pieces, as well as a number of other designs by this jeweler. Modern and Contemporary are some of the most popular styles of Panerai jewelry & watches available on 1stDibs. While this collection reflects work that originated over various time periods, most of these items were designed during the 21st Century and Contemporary. Many customers also consider jewelry & watches by Baume & Mercier, IWC and Sicis Jewels if you are looking for additional options. Prices for Panerai watches and jewelry can vary depending upon gemstone, time period and other attributes. 1stDibs's price starts at $1,000 and tops out at $67,428, while pieces like these can sell for $7,473.