Known as one of the early American Impressionists, artist Reynolds Beal was born in 1867 and studied at Cornell from 1885–89 with a focus on naval architecture. His formal art training would come later as he studied under William Merritt Chase at Chase's school in Shinnecock, Long Island, in 1896.

Beal's love of yachting resulted in paintings of maritime scenes from Rockport to the Hudson, as well as the Caribbean, from his own sailing boat that doubled as his studio. His first solo exhibition took place at the Clauson Gallery in New York City in 1905. In 1917 he was a founding member of the Society of Independent Artists. Beal was one of the few Americans chosen to have their work exhibited at the Luxembourg Museum in Paris in 1919.

Beal was a member of the Salmagundi Club, the American Watercolor Society, the Society of American Engravers, the National Arts Club and was elected an associate member of the National Academy of Design. He also founded the New Society of Artists, which consisted of 50 of the most influential painters of that time, among them, Childe Hassam, Maurice Prendergast, George Bellows and William Glackens.

Pair of Charcoal and Crayon Sketches by Reynolds Beal

H 30.5 in. W 38.5 in. D 3 in.
Oil on Canvas "City View" Sunset City Scene with Palace Signed Kitty Young
By Kitty Young
Located in Stamford, CT
A fine oil on canvas painting signed Kitty Young, of a City View in the Sunset. This piece framed in a gilt gold wooden carved frame that is bordered in an ebony and gilt outer frame...
Category

Oil Painting circa 1930s Figures on a Path

Abstract Oil on Canvas Painting by Colow B. Dated 1984

H 24.500 in. W 24.500 in. D 3.000 in.
Contemporary Oil on Canvas Signed Lower Right
Located in Stamford, CT
A contemporary oil on canvas signed on the lower right. A stick man at the roulette table with patrons in the foreground. Vibrant colors mounted in a gilt gold frame. Possibley Hurga...
Category

H 21 in. W 24 in. D 2 in.
"The Circus is in Town" by Reynolds Beal
By Reynolds Beal
Located in Wiscasset, ME
Watercolor on paper Artist has sold at auction in excess of $95,000
Category 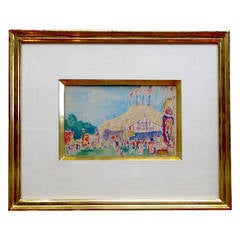 "The Circus is in Town" by Reynolds Beal

Reynolds Beal furniture is available for sale on 1stDibs. These unique items are often made from Paper, and are designed with extraordinary care. There are many options to choose from in our collection of Reynolds Beal furniture, although brown editions of this piece are particularly popular. In-stock we have 3 vintage editions of these items, while there is also 0 modern edition to choose from. Many original furniture by Reynolds Beal was created in the Neoclassical style in the United States during the 20th century. Many customers also consider furniture by Hermann Ottomar Herzog, Walter Emerson Baum and Abraham Ortelius if you’re looking for additional options. The prices for Reynolds Beal furniture can vary depending on size, time period and other attributes. Price for these items starts at $3,000 and tops out at $36,500, while pieces like these can sell for $12,500 on average.