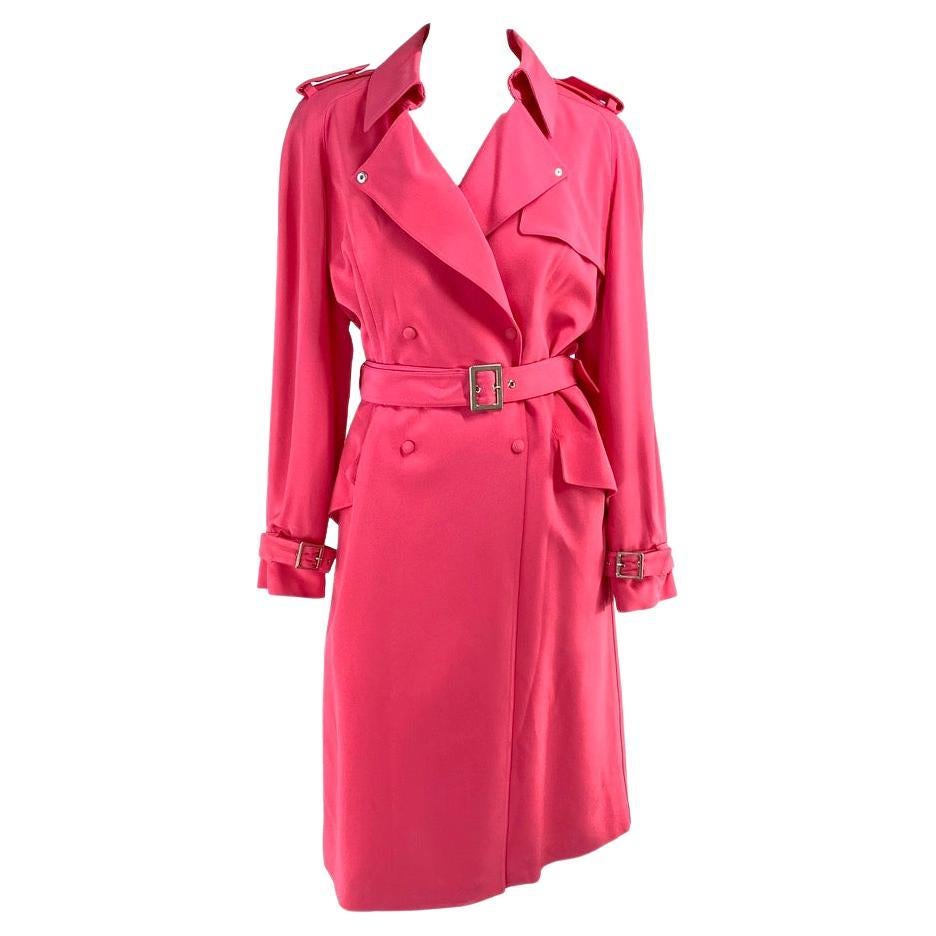 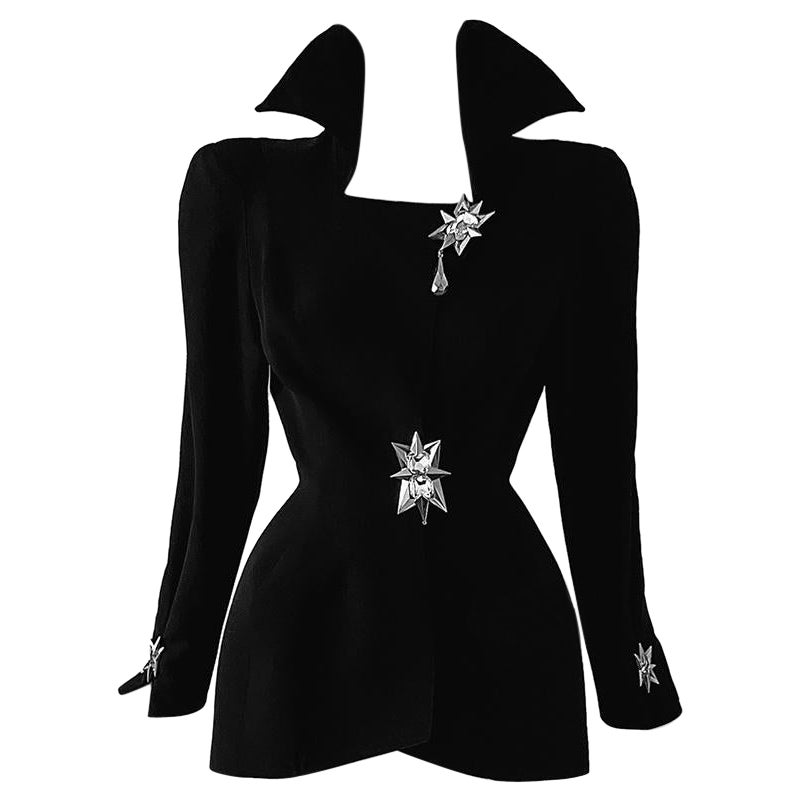 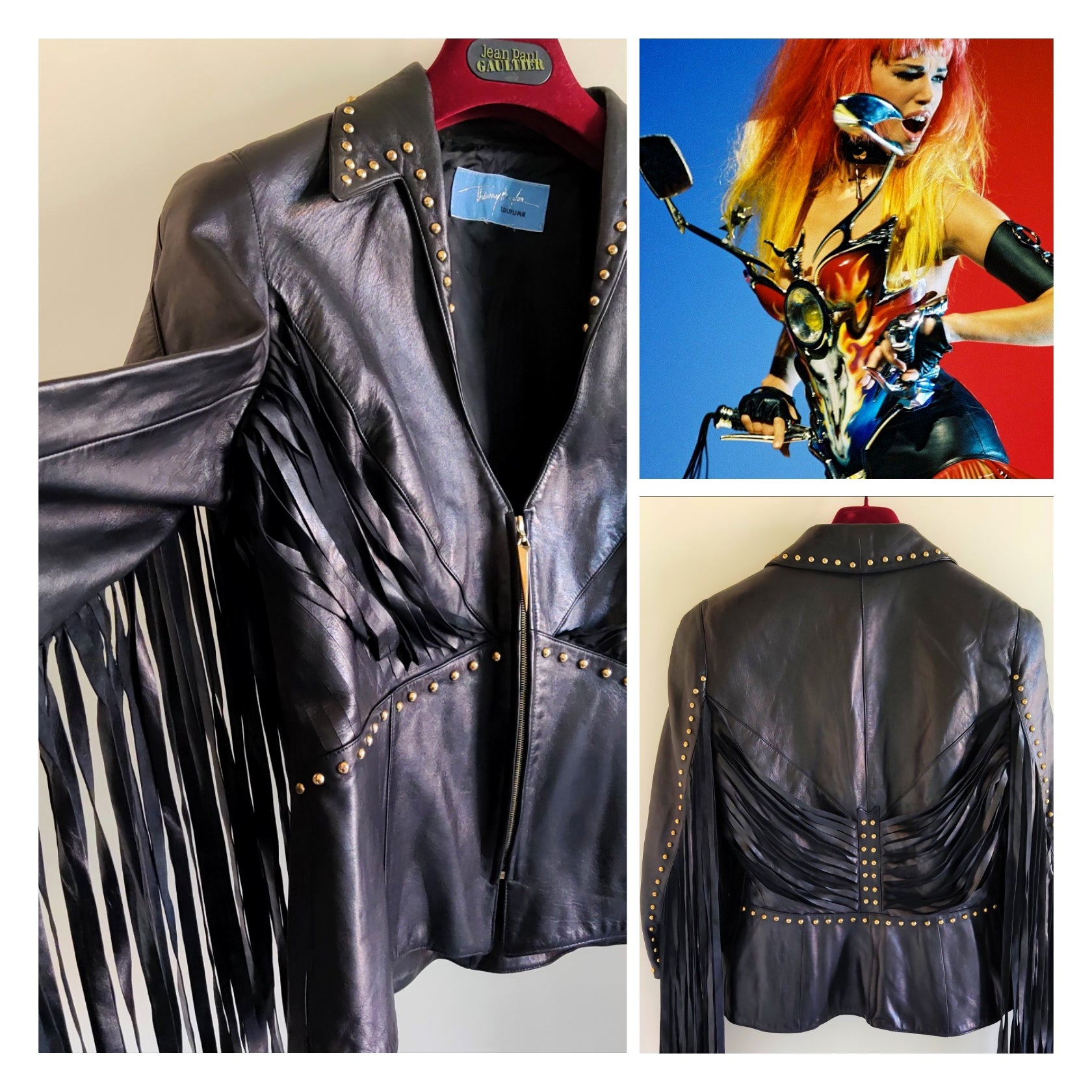 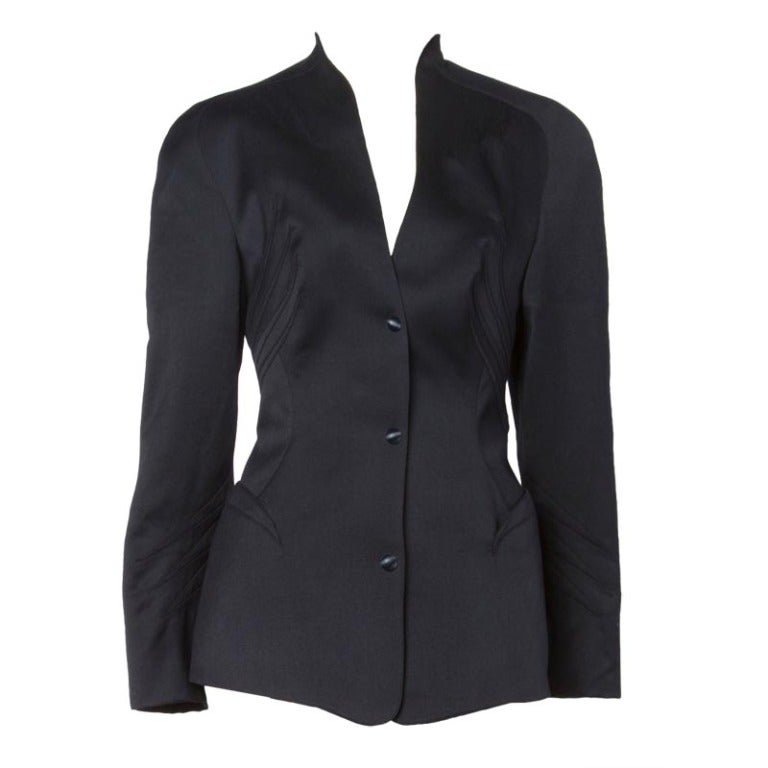 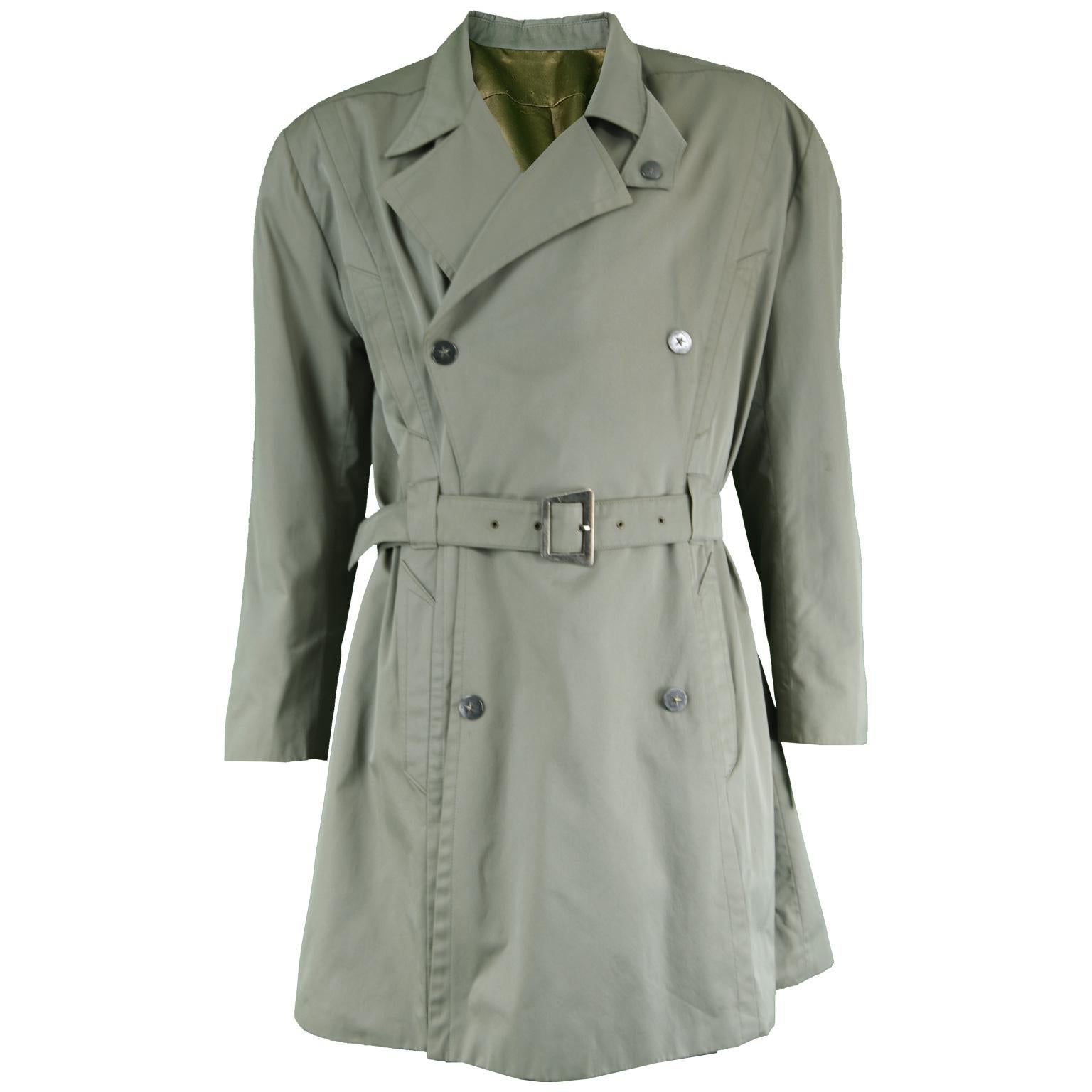 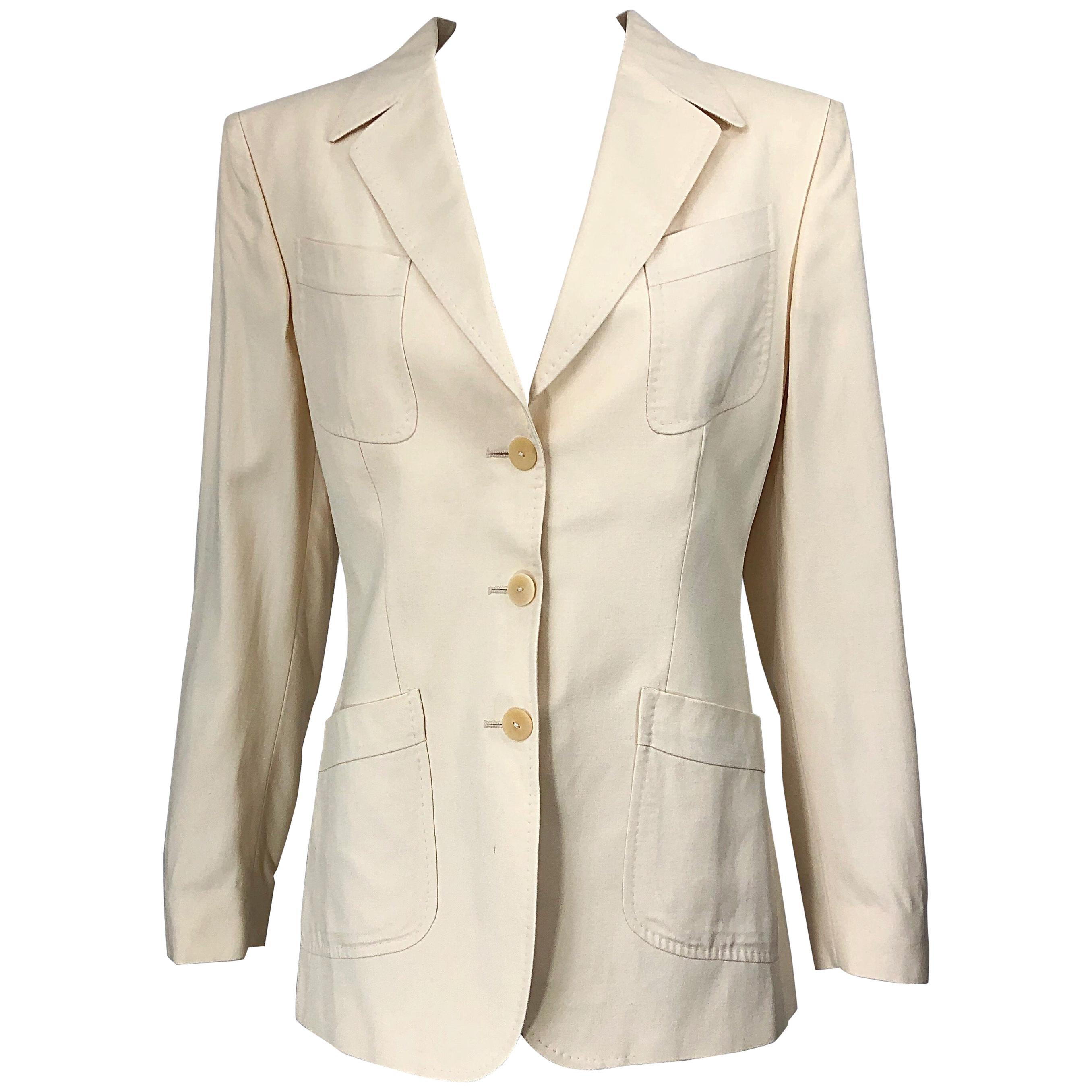 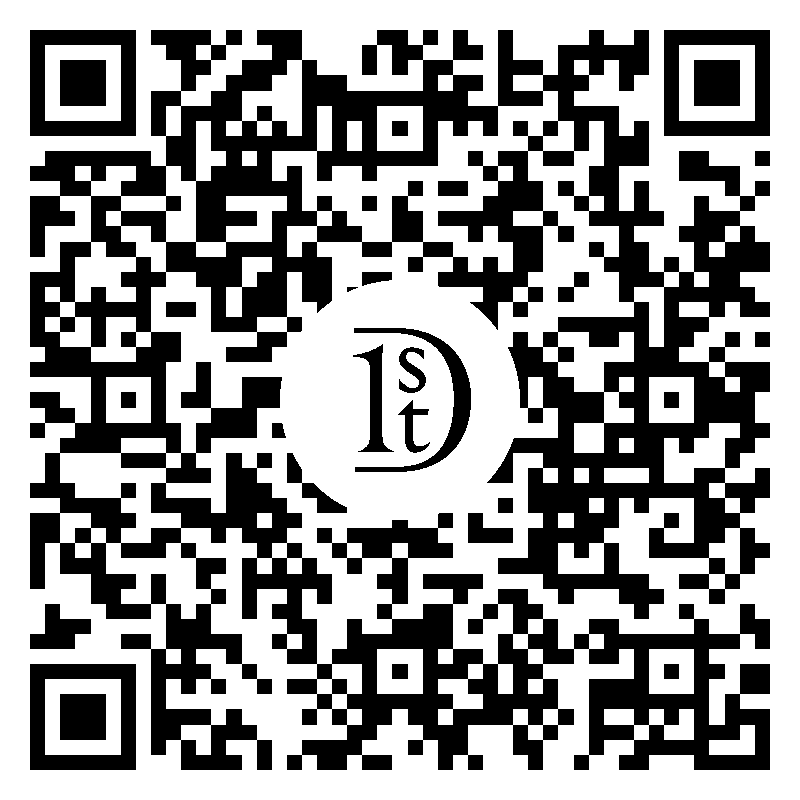 This vintage Thierry Mugler Act IV jacket was never worn and still has its original tags attached. This gorgeous fitted blazer has an asymmetrical design and is made of 65% wool and 35% viscose.There are two snap closures along center front with black rectangular decorative buttons and a slit on the right side. Inside, there is an additional one sided snap. Labeled Thierry Mugler Activ Made in Italy Marked an Italian size 48 but please use the measurements as a guide. BUST: 40" WAIST: 32" HIPS: 46" SHOULDERS: up to 20", measured at the top point of the shoulder before the drop SLEEVES: 28" from seam LENGTH: 26" 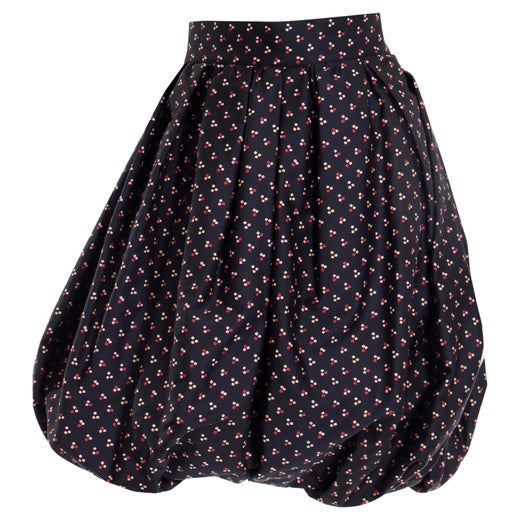 Fashion as sculpture, as avant-garde expression, as spectacle: Thierry Mugler’s career pushed the boundaries of what fashion design and clothing could mean.

Mugler, who went by Manfred in recent years, founded his brand in 1973 with his first personal collection. By the late 1990s, he was more famous for his fragrances, thanks to the brand’s best seller Angel. But the designer’s vintage evening gowns and dresses have recently returned to red carpets, worn by stars like Kim Kardashian and Cardi B.

Thierry Mugler’s penchant for performance, drama and costuming came from his background in ballet, having danced as a teenager with the Opéra national du Rhin in his hometown of Strasbourg, France. In the 1980s and ’90s, his couture shows were theatrical and futuristic, similar to those of his contemporaries Jean Paul Gaultier and Christian Lacroix. In one of Mugler’s shows, the then-pregnant legendary supermodel Pat Cleveland (part of the coterie of glamorous muses associated with designer Halston) was suspended from the ceiling and then glided down the runway surrounded by clouds of smoke. Mugler would become known for his immaculate tailoring as well as for his increasingly avant-garde designs that featured sharp cuts, sexy and fetishistic elements, an integration of metal and uniquely treated materials like PVC and leather.

Recent years have seen Mugler’s archival designs, especially from his 1995 haute couture show, take center stage, coinciding with the resurgence of camp in fashion and the return of bodycon dresses. The brand’s roster of clients has included some of the most visionary figures in fashion, from David Bowie and Diana Ross to Beyoncé and Lady Gaga, and the founder’s influence on over-the-top fashion can be seen in the work of designers such as Jeremy Scott and Alexander McQueen.

1stDibs Buyer Protection Guaranteed
If your item arrives not as described, we’ll work with you and the seller to make it right. Learn More
About the Seller
4.9
Located in Portland, OR
Platinum Seller
These expertly vetted sellers are 1stDibs' most experienced sellers and are rated highest by our customers.
Established in 2001
1stDibs seller since 2015
1,597 sales on 1stDibs
Typical response time: 2 hours
More From This SellerView All
People Also Browsed
You May Also Like