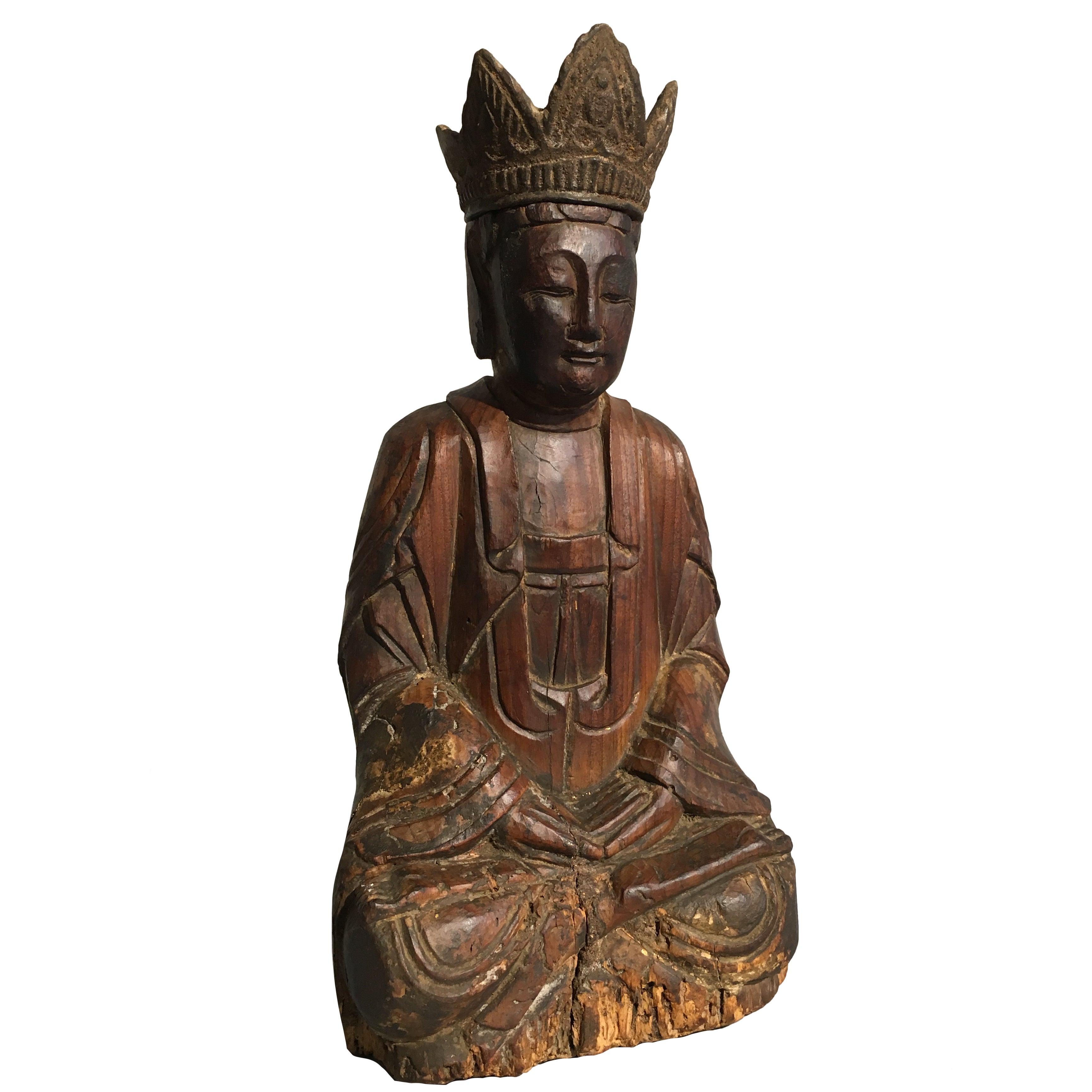 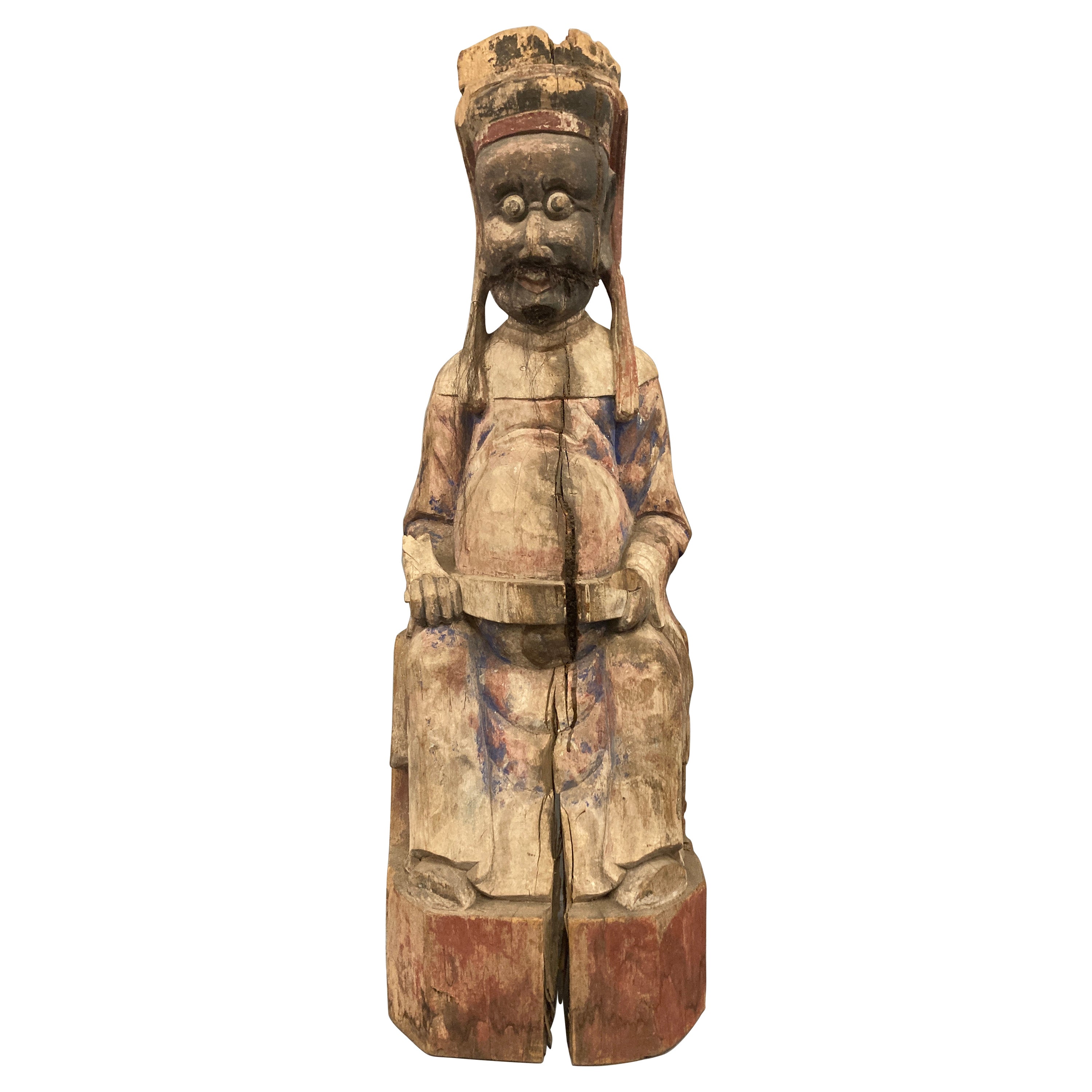 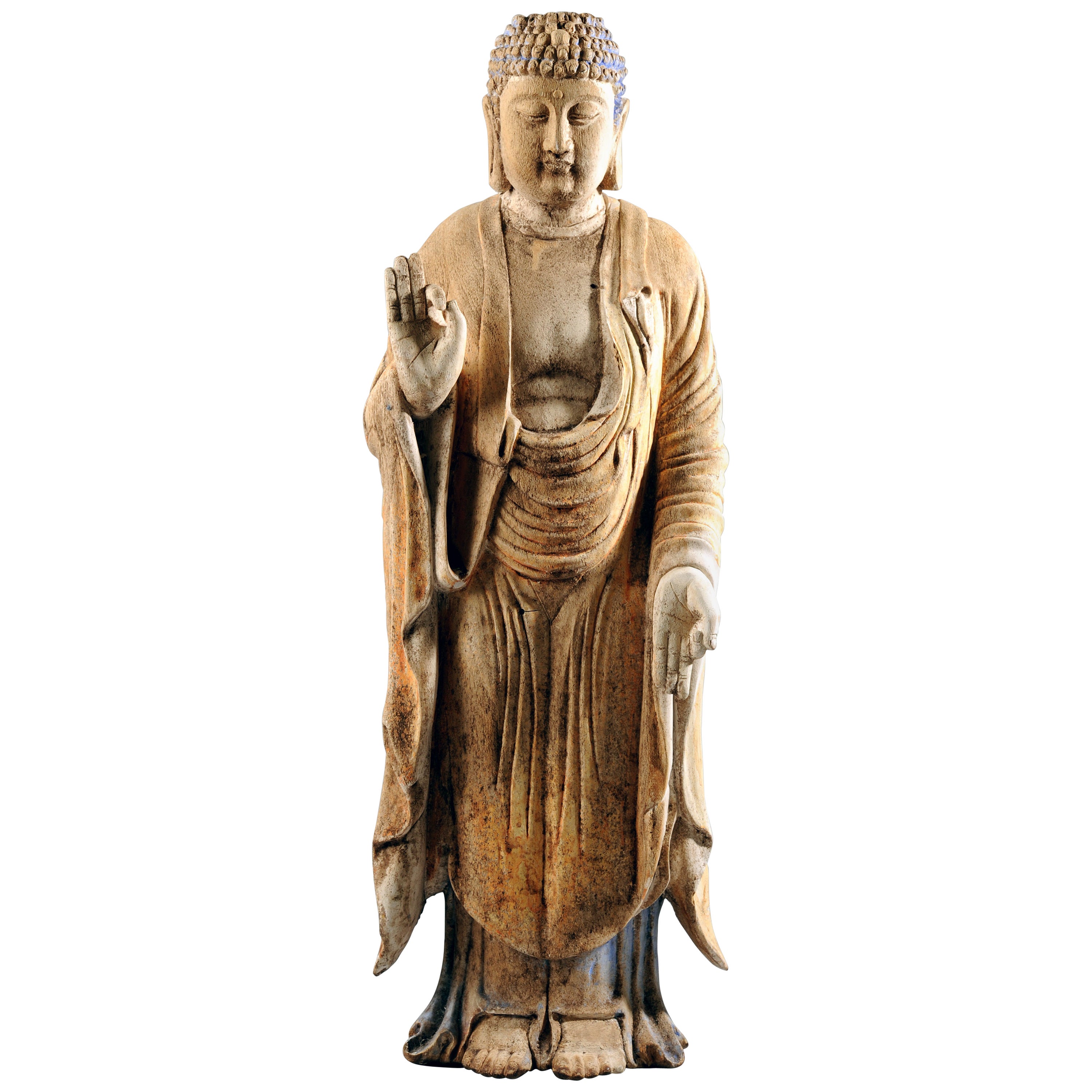 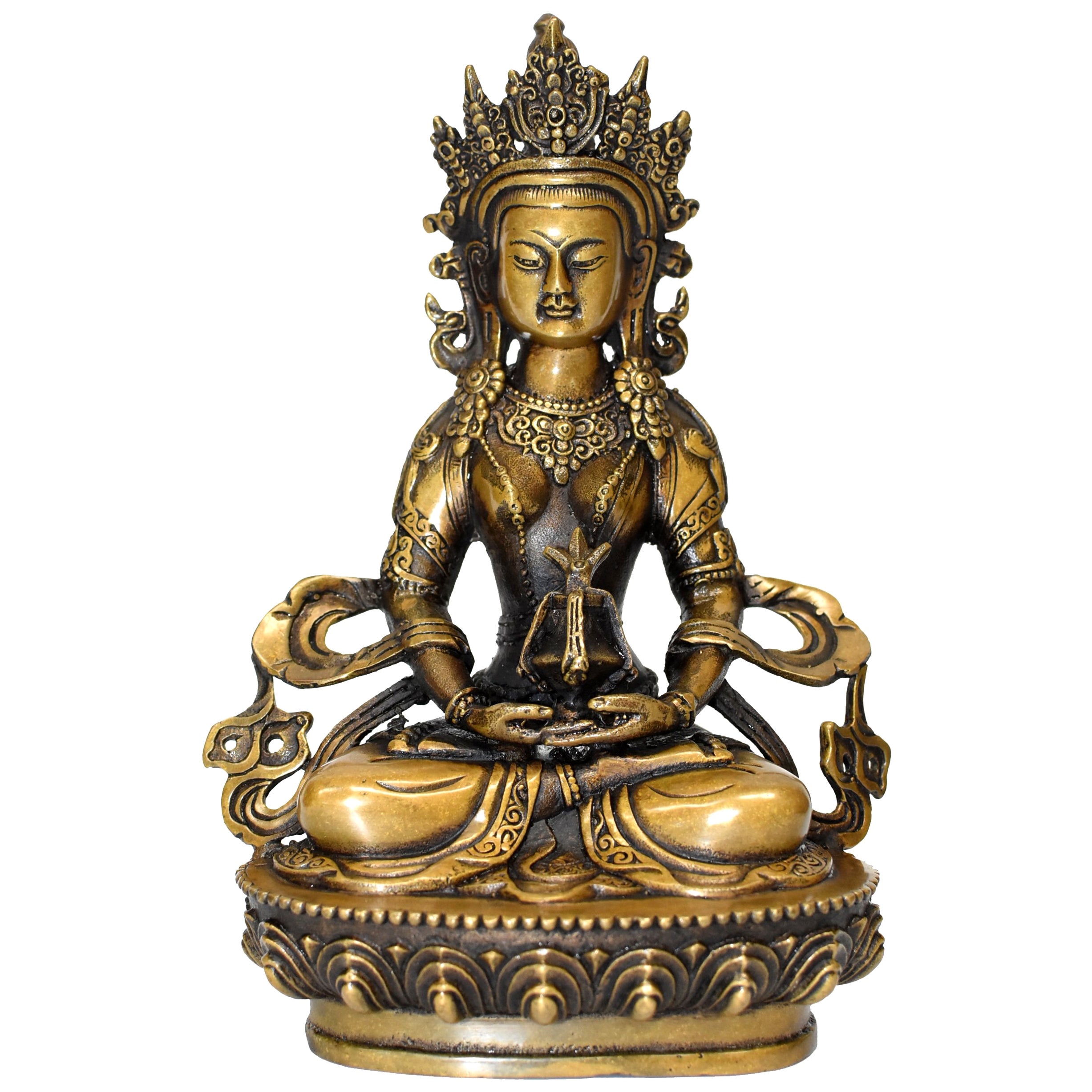 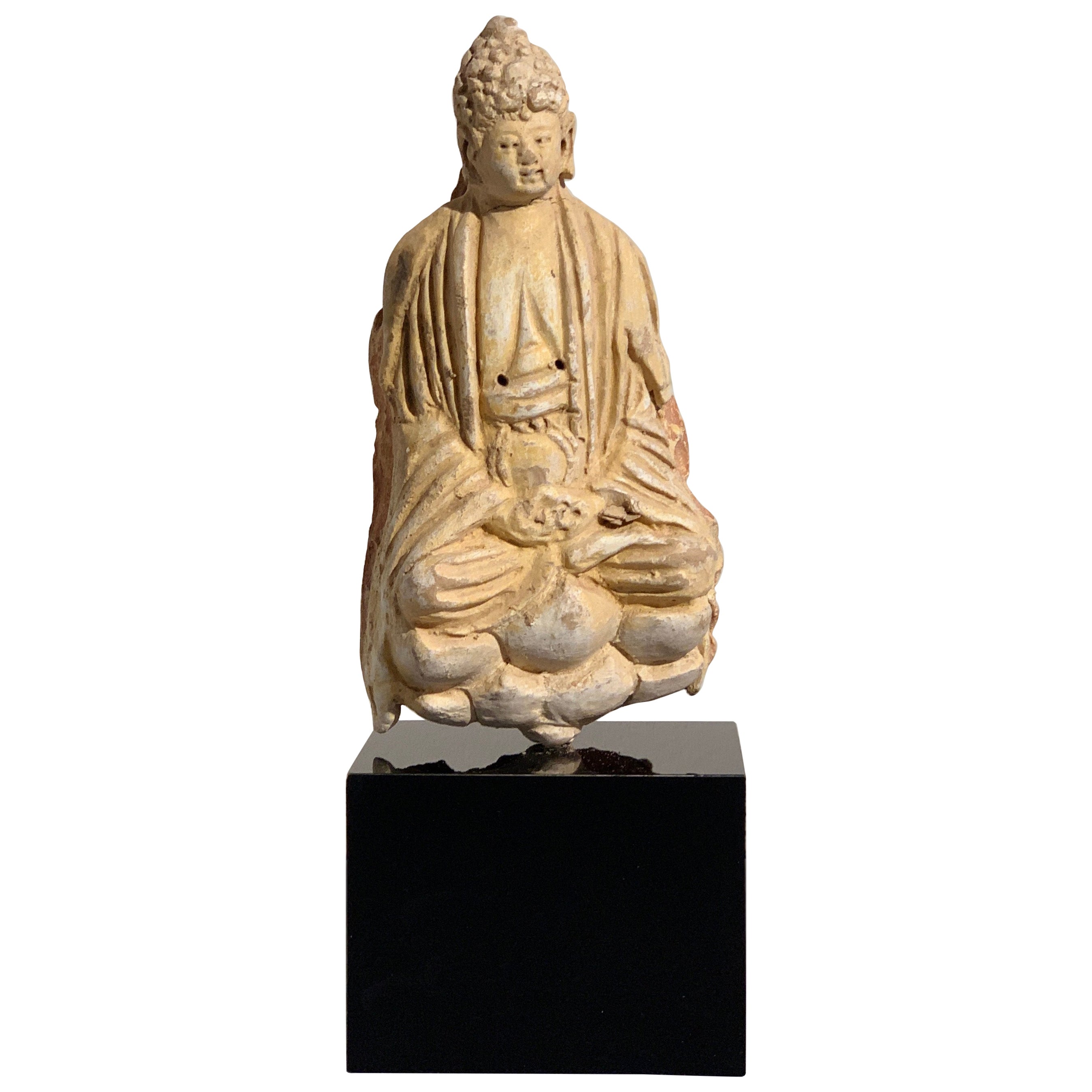 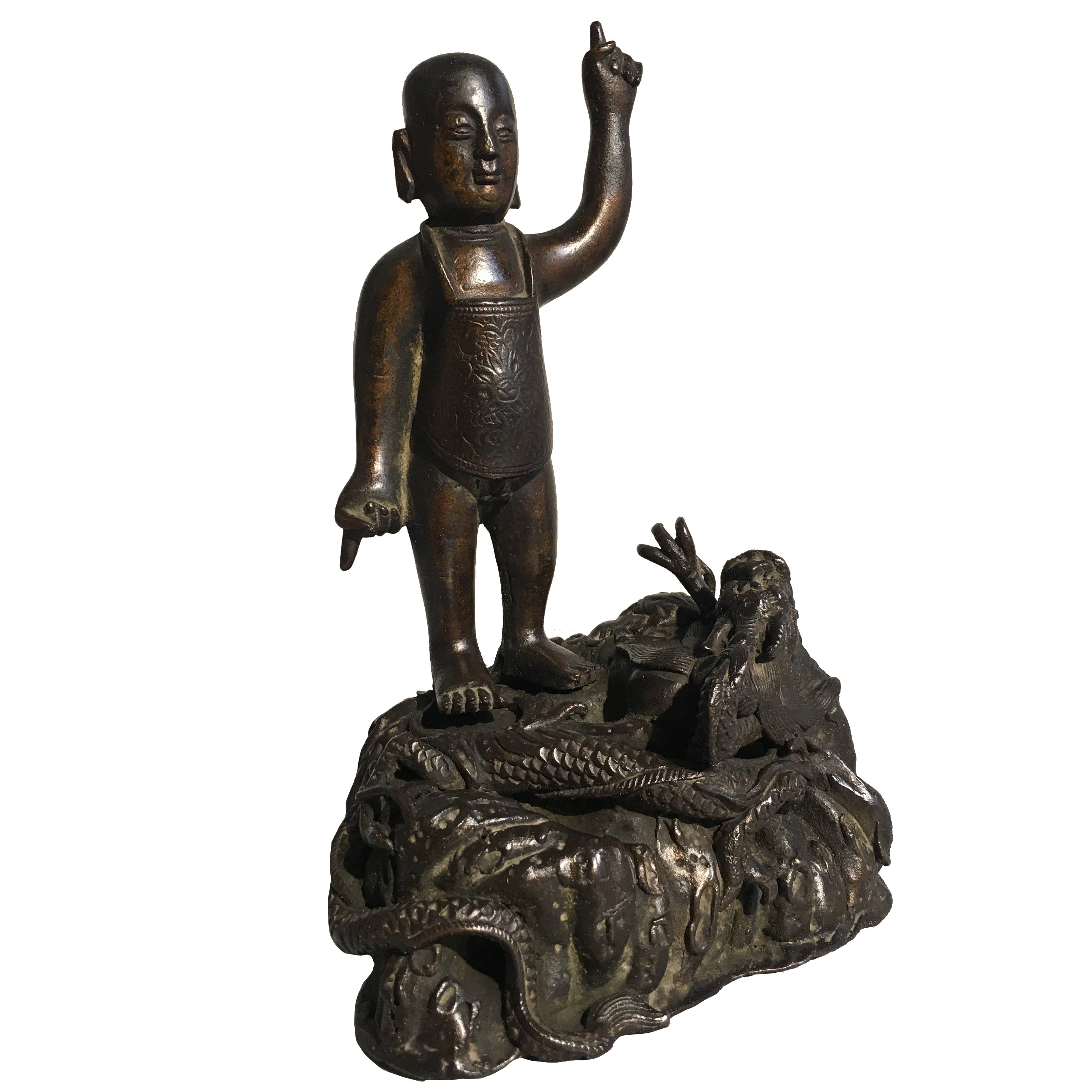 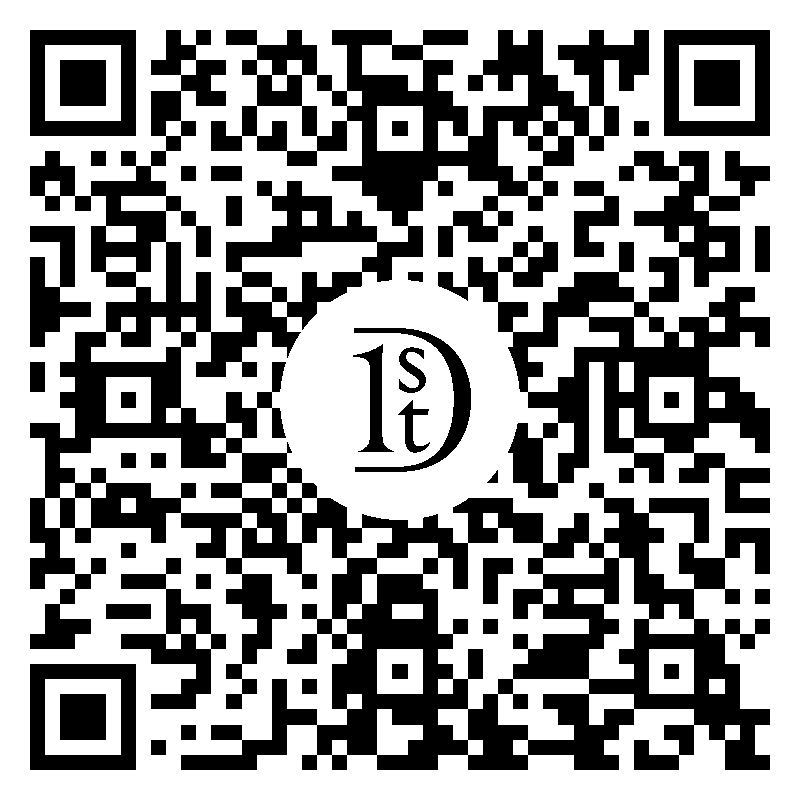 A beautiful and serene Chinese Ming dynasty carved wood figure of the Buddha Amitayus, the Buddha of long life, and a form of Amitabha Buddha. He is seated in dhyanassana, dressed in loose fitting robes, and adorned with a five pointed crown and necklace. His robes have been covered in a deep Vermillion lacquer with black lacquer highlights, which have been touched up with red paint over time. Red is the color of Amitabha and Amitayus. His face has been carved beautifully, with a downcast eyes, a strong nose, and beatific smile. The face is of typical Ming form, well rounded, almost to the point of being chubby. His face and crown are heavily gilt, complementing the red of his robes nicely. A large cavity in the back of the statue would originally have held consecration materials. In overall fair condition, with loss and flaking to the lacquer, revealing the gesso, wood, and fabric underneath. The crown most likely a later replacement. Mounted on a custom metal base.

Chinese Ming Dynasty Carved Wood Budda
Located in Dallas, TX
A carved wood Budda from the Shanxi region, made during the Ming Dynasty. The carved figure has an ancient polychrome finish.
Category

$4,500
Chinese Carved Wood Teaching Buddha in Ming Style
Located in Atlanta, GA
A statue of standing Buddha (Shakyamuni), finely carved out a single block of wood (might be cypress based on the wood grains). Attired in a flowing robe with open chest, the Buddha ...
Category

$5,000
Tibetan Amitayus Buddha
Located in Somis, CA
The beautiful bronze sculpture is of The Tibetan Amitayus, the Bodhissatva/Buddha of infinite life. Adorned with necklaces, crown and sashes decorated with rosettes, pearls and medal...
Category

$550
Chinese Ming Dynasty Painted and Carved Statue of Guanyin, 15th or 16th Century
Located in Yonkers, NY
A Ming dynasty period 15th or 16th century painted stone sculpture of the Bodhisattva of Compassion Guanyin in a seated position. Created in China during the Ming dynasty, this marbl...
Category