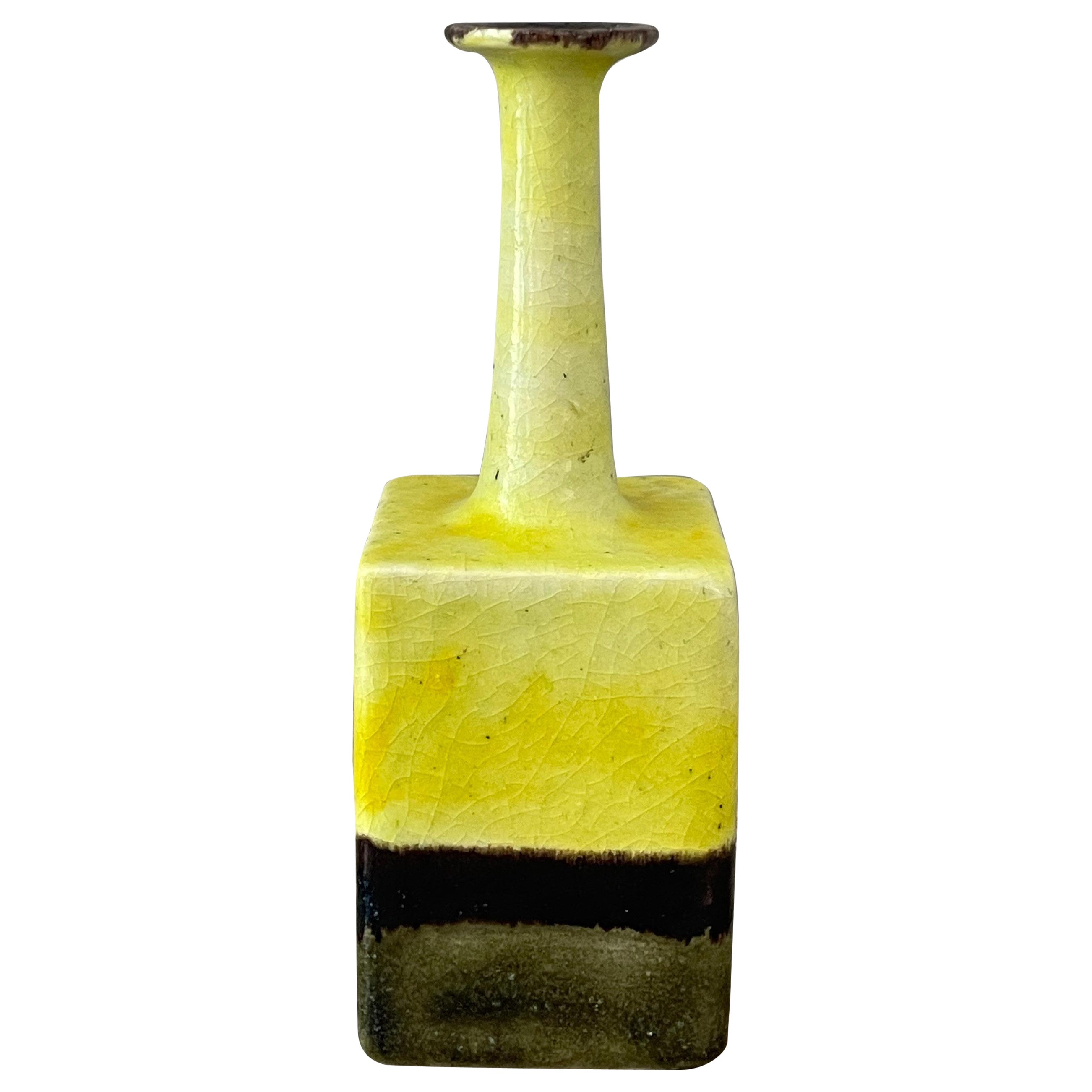 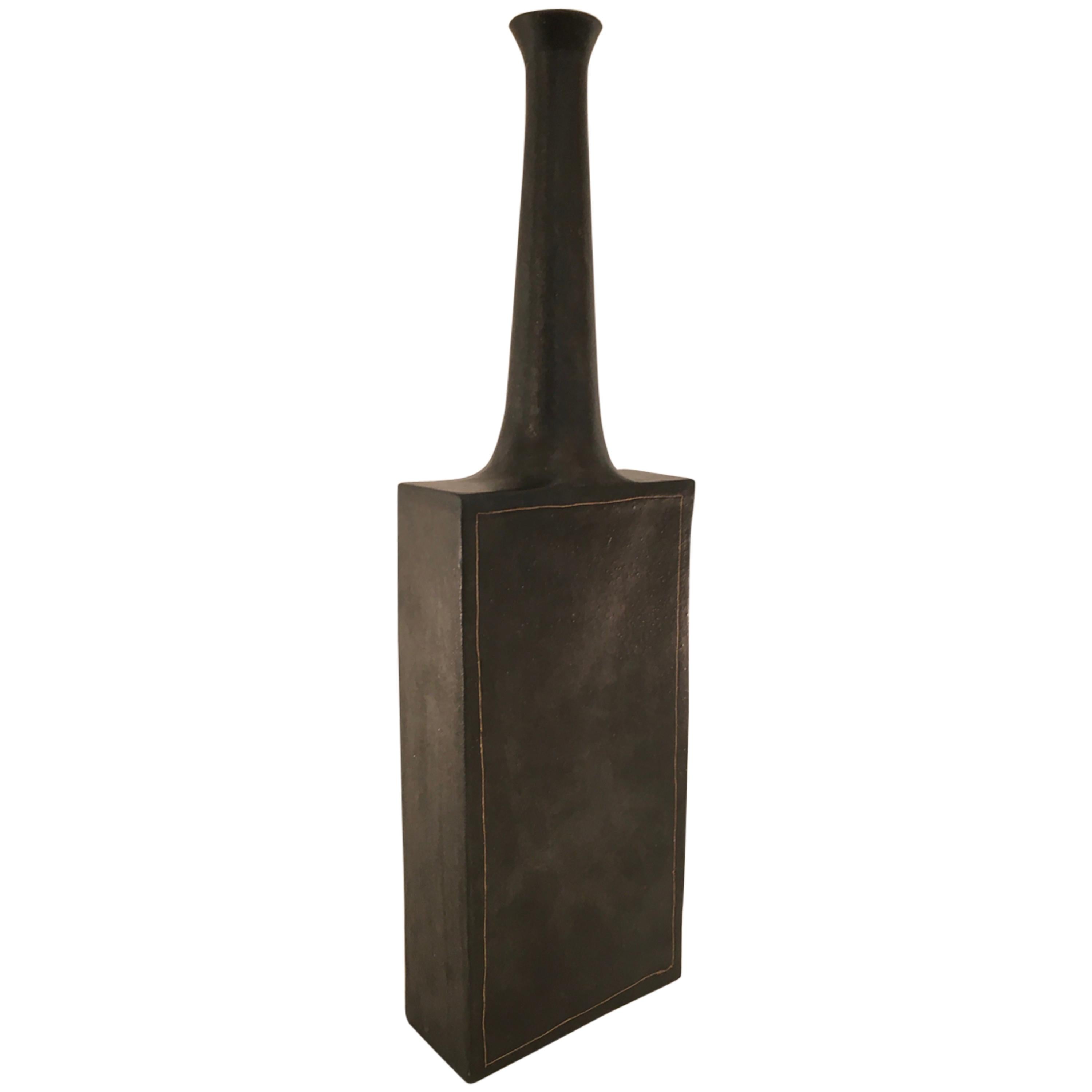 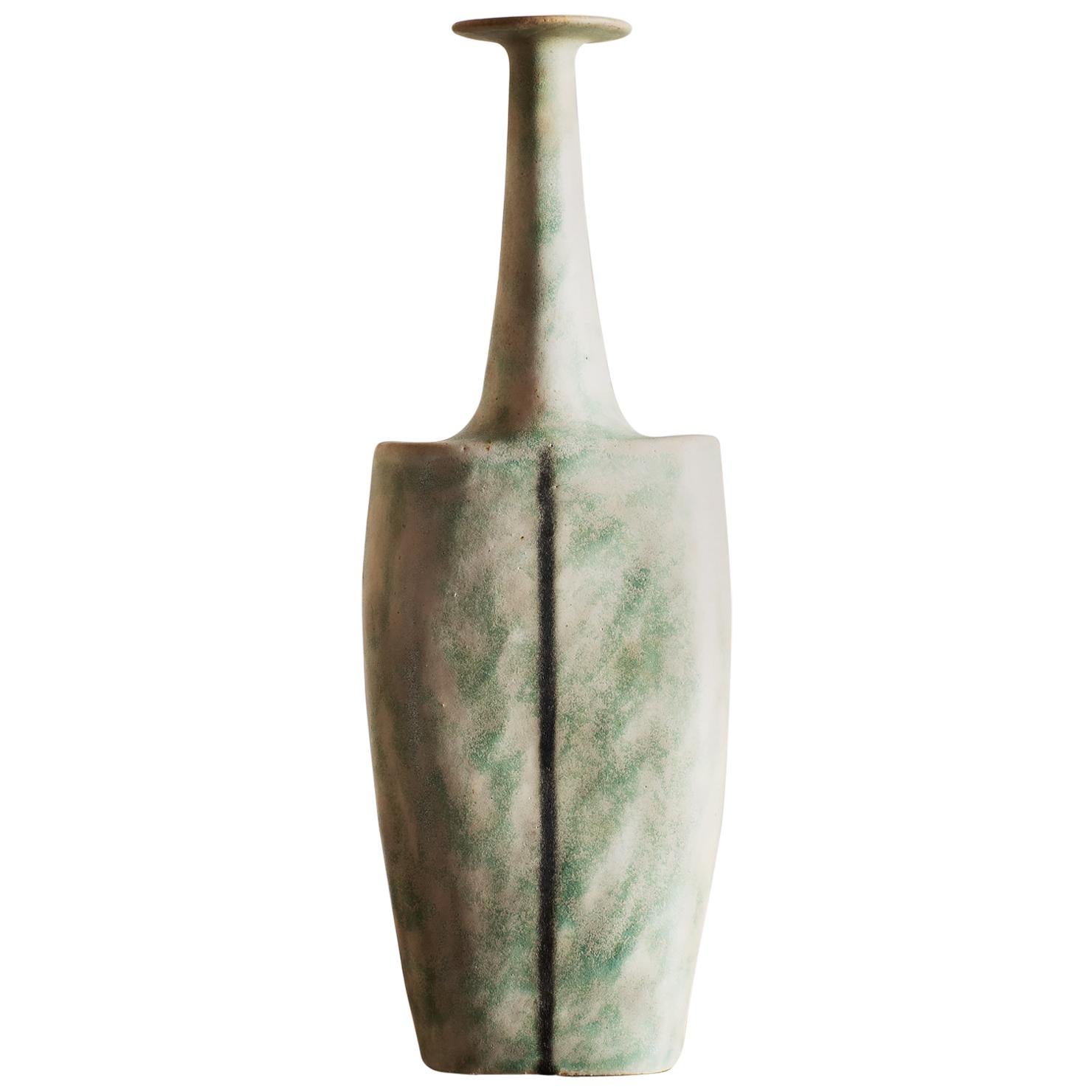 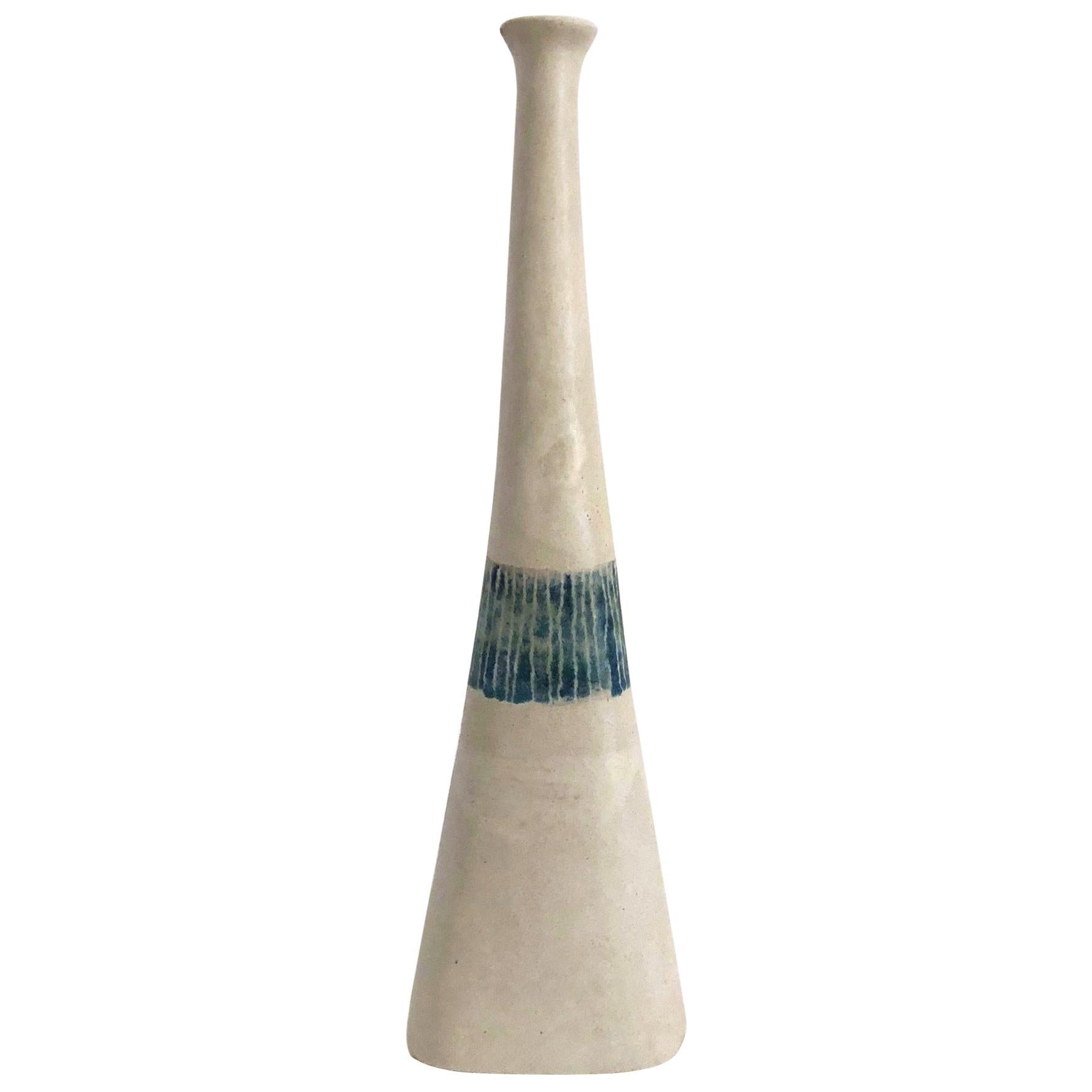 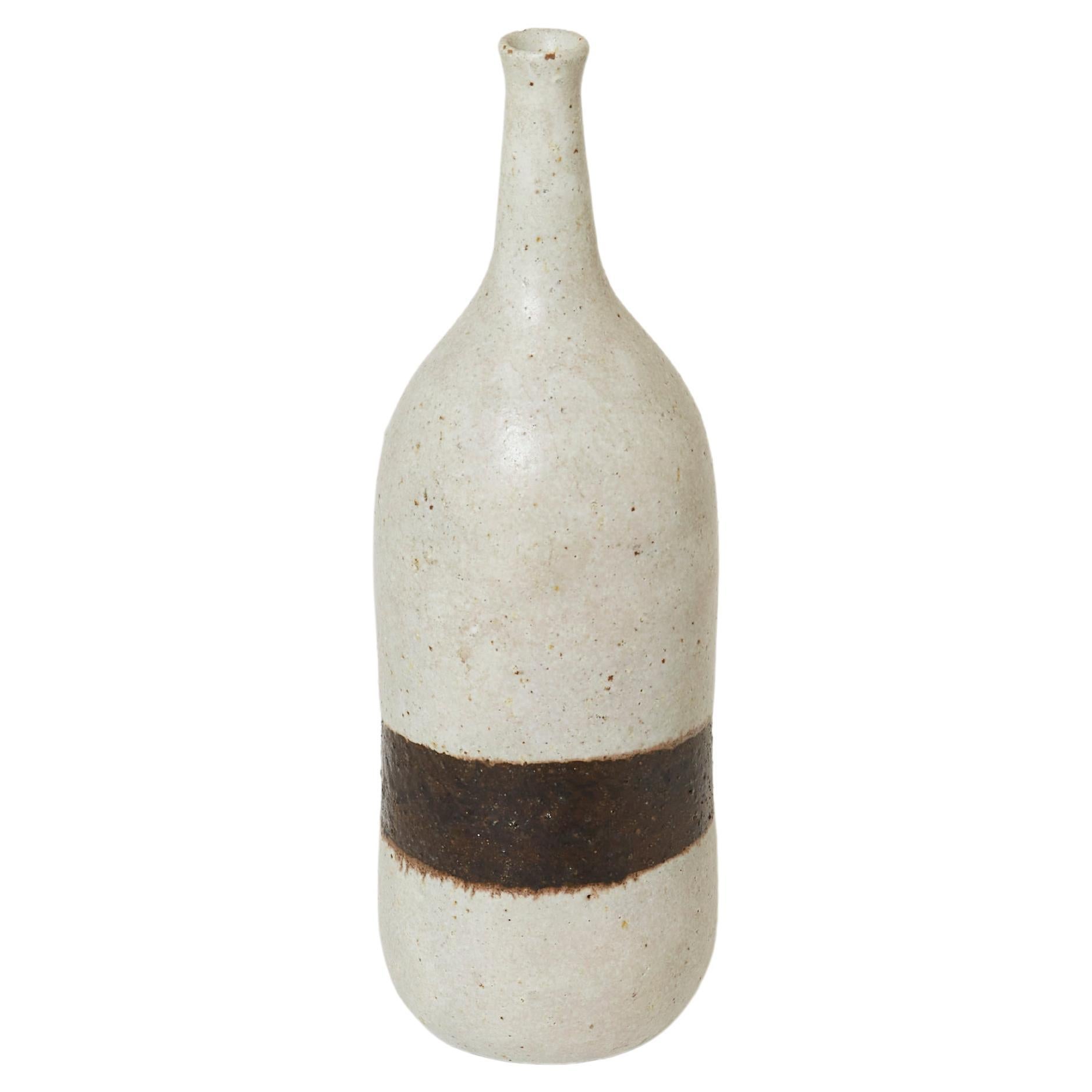 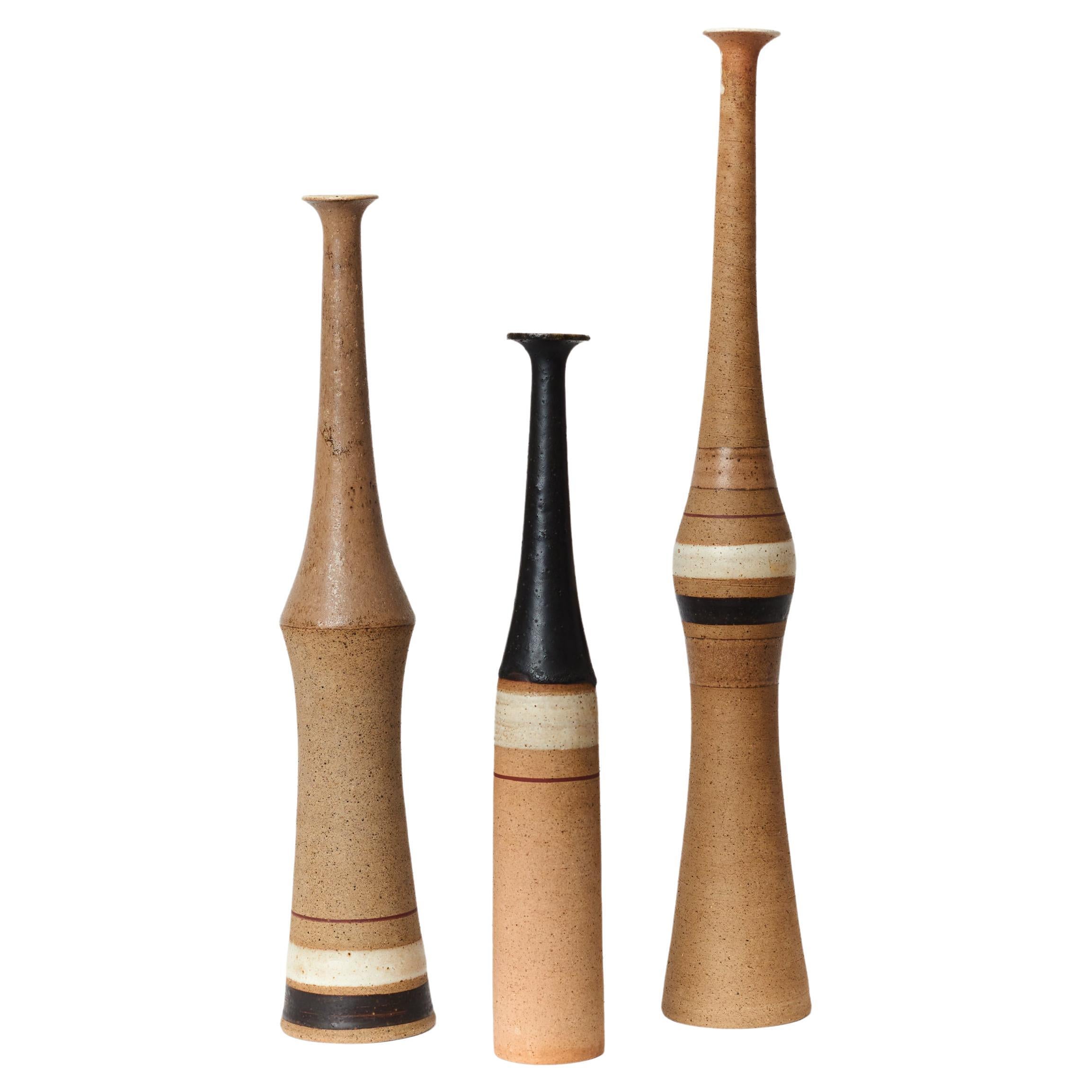 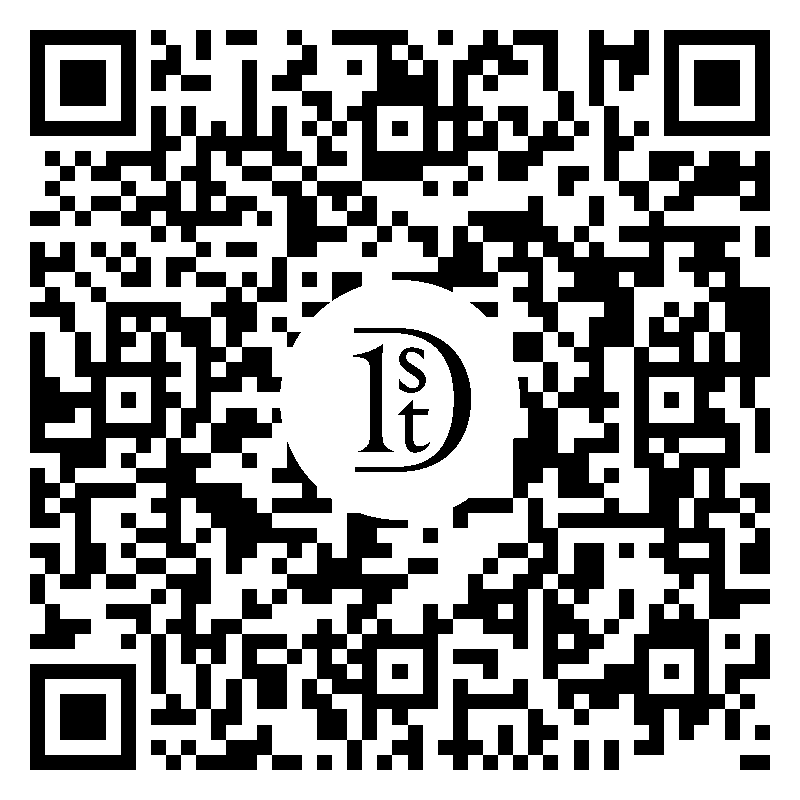 Bruno Gambone decorative ceramic bottle-shaped vessel with chalk-white and tan surface and chocolate glazed ribbon motif by (circa 1970s). With a modern rectangular base and lean, elongated neck its shape and finish have their origins in primitive works. However, the circular disk which tops the vessel puts it in the modern world. The lip that has a blue green glaze, graces the top is exceptionally desirable and very collectible. In very good vintage condition commensurate with age. Signed: Gambone Italy. About the Artist: The Gambone ceramics have had two very distinct phases of artistic expression in their history. That of Guido Gambone, arguably Italy's most prominent contemporary ceramicist of the 1950s and 1960s, and that of his son, Bruno Gambone, who is still at work. The father's work was more exuberant and colorful. Bruno, who returned to Florence in 1969 to keep the ceramic studio running after his father died, became intent on expressing his own very different artistic vision. For the most part, his work was influenced by 1960s and 1970s minimalist art. The forms are more rectilinear, the decoration very simple and the tones muted. During a stint in New York, Bruno spent time with the likes of Robert Rauschenberg, Roy Lichtenstein and Andy Warhol, and gained much experience in the fields of painting, sculpture, cinema and theatre. His ceramic pieces have become internationally collectible works of art. This vase is not part of the mini series. It is on the smaller range of his work. 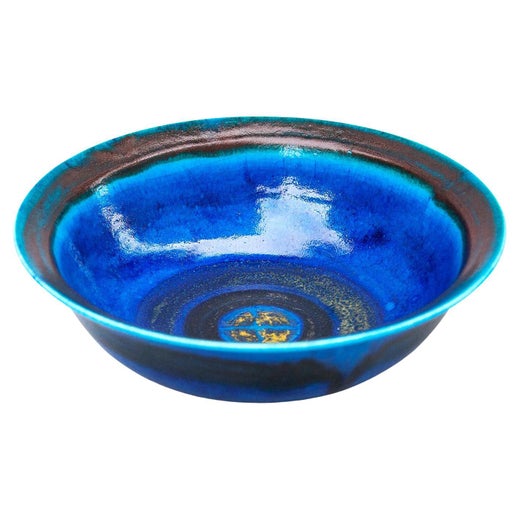 Known for his prolific mid-century works, Italian artist Bruno Gambone is regarded as one of the most influential figures in ceramics. Born in 1936 in Vietri sul Mare, Gambone was introduced to the world of ceramics at the age of 14 while he worked in the Florence studio of his father, renowned ceramist Guido Gambone.

Toward the end of the 1950s, Gambone left his father’s studio to work at Italian artist Andrea D’Arienzo’s workshop, where he explored other disciplines such as canvas painting and textile decoration. He became committed to painting and exhibited at Florence’s La Strozzina in 1959.

In 1963, Gambone left Italy for the United States. He lived in New York City during a fertile era for creative expression — a time marked by pivotal artistic movements such as Pop art and Abstract Expressionism. Gambone made numerous friends and moved in the same circles as iconic American artists Andy Warhol, Roy Lichtenstein and Robert Rauschenberg. The Italian native learned more about a range of fields such as sculpture and theater. However, after five years, he returned to his homeland to live in Milan.

While in Milan, Gambone experimented with jewelry design for a brief period. But following his father’s death in 1969, Gambone returned to Florence to run his father’s studio, shifting his attention back toward ceramics.

Throughout the 1970s, Gambone created table lamps, vases, bowls and sculptures, including a series of ceramic animals. He began work in 1972 on what would become his celebrated “Fantastic Animals” series — initially a minimalist collection of stoneware fish, lions, snakes and other creatures characterized by sharp-edged geometric forms.

Gambone showcased his ceramic works at the 1972 Venice Biennale and the Milan Triennale in 1973. The artist received awards from the Museum of Modern Art in New York, the Museum of Contemporary Art of San Diego at La Jolla and other institutions.

About the Seller
4.8
Located in Chicago, IL
Vetted Seller
These experienced sellers undergo a comprehensive evaluation by our team of in-house experts.
Established in 1997
1stDibs seller since 2006
483 sales on 1stDibs
Typical response time: <1 hour
Associations
20th Century Specialists
More From This SellerView All
You May Also Like
Featured in Holiday Gift GuideView All