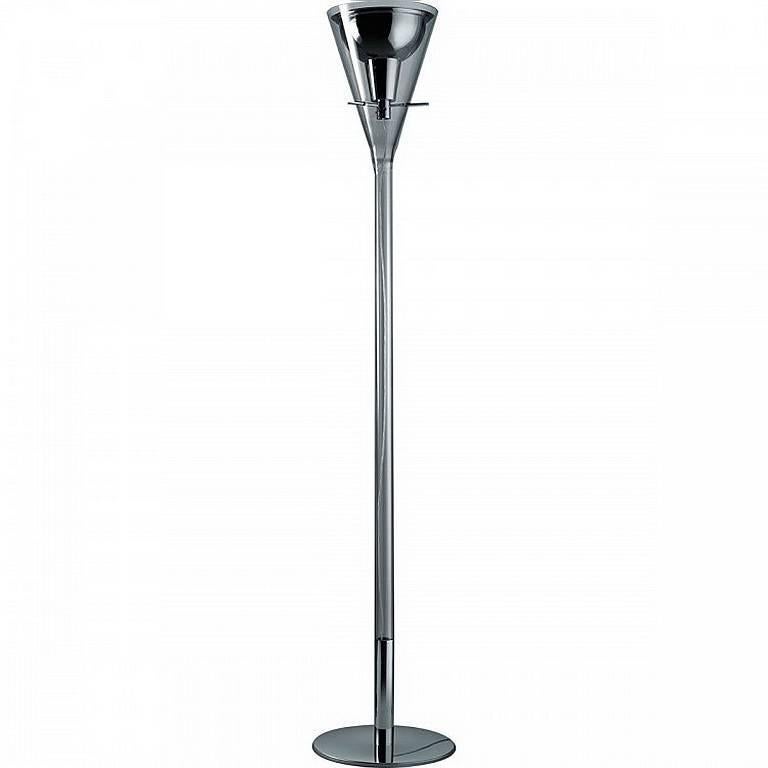 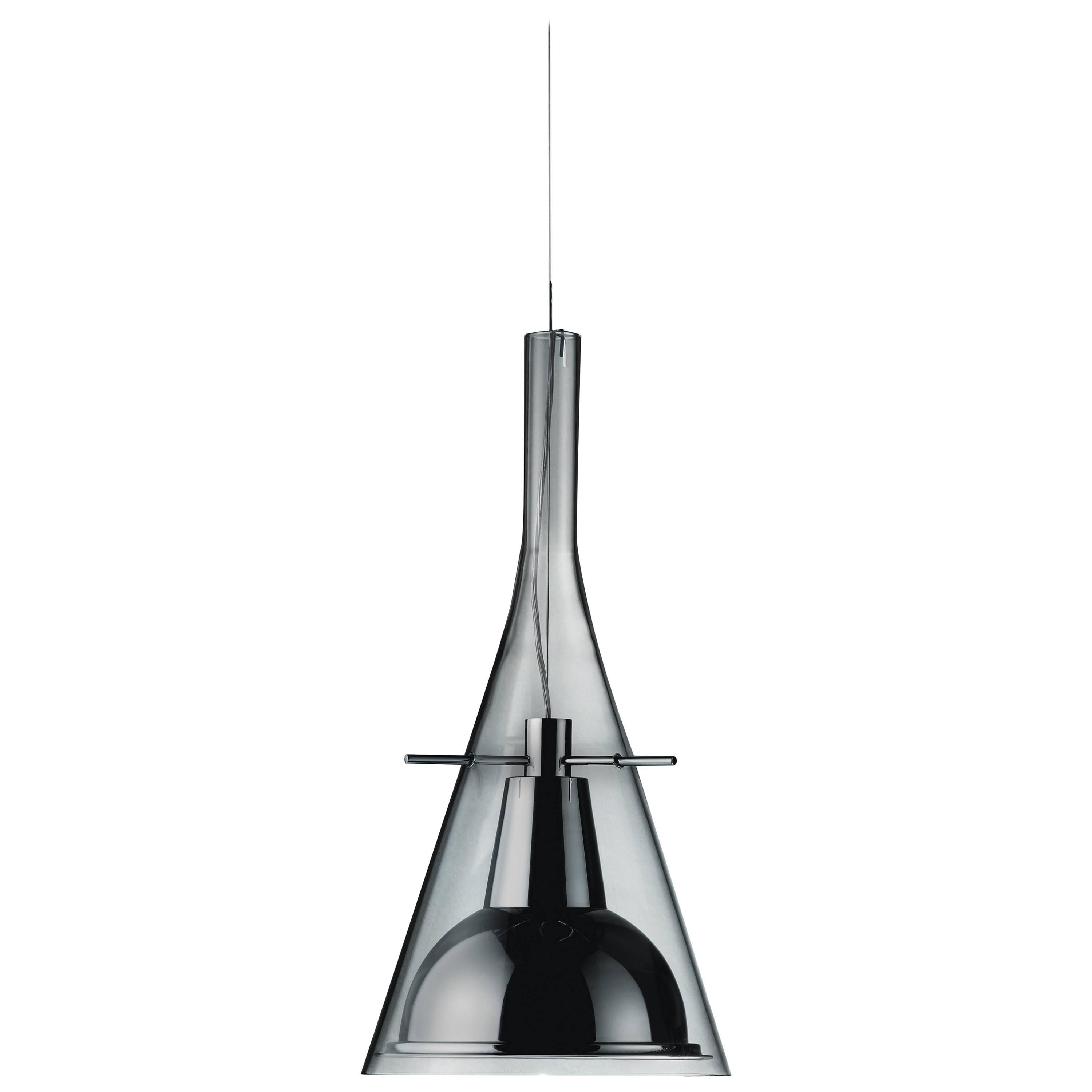 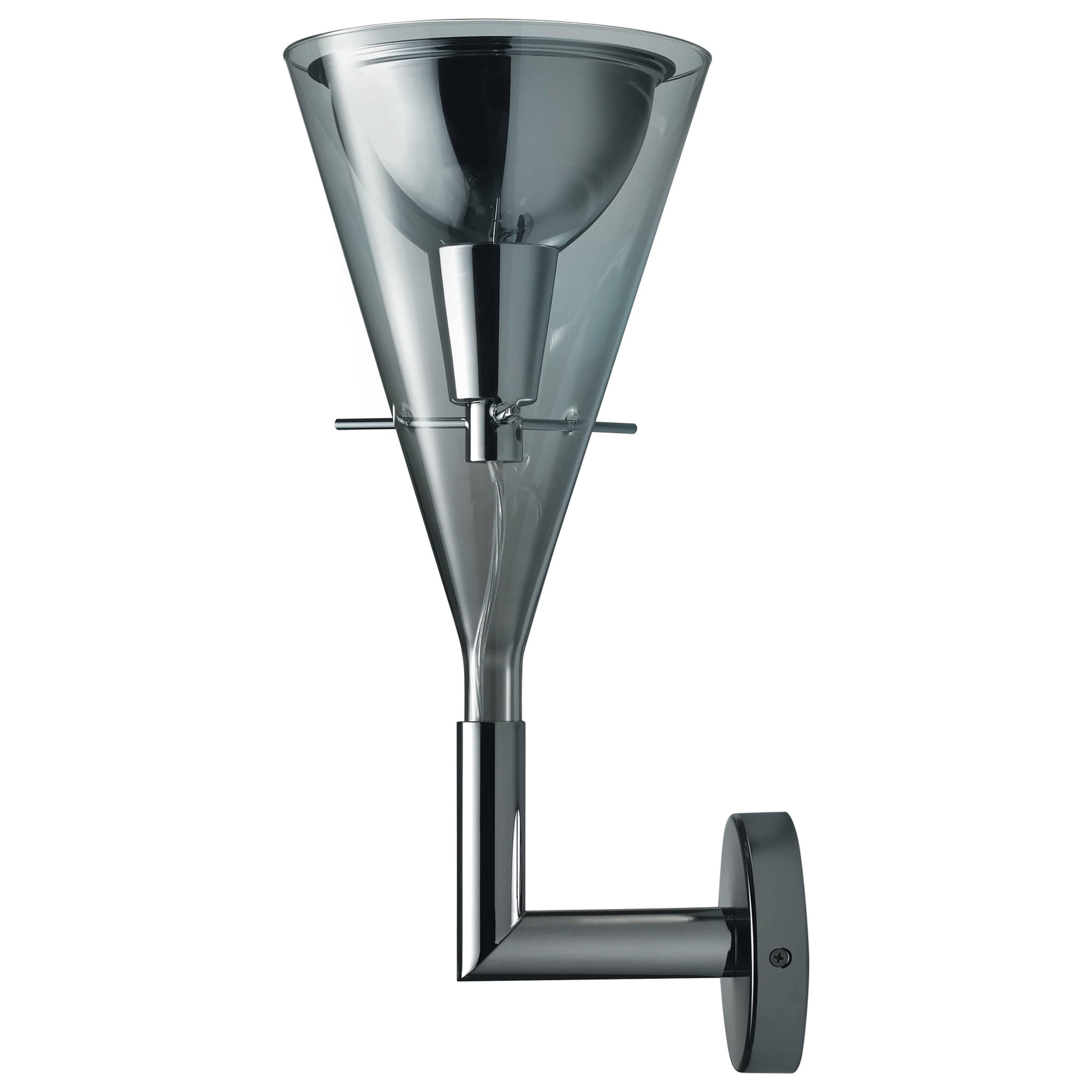 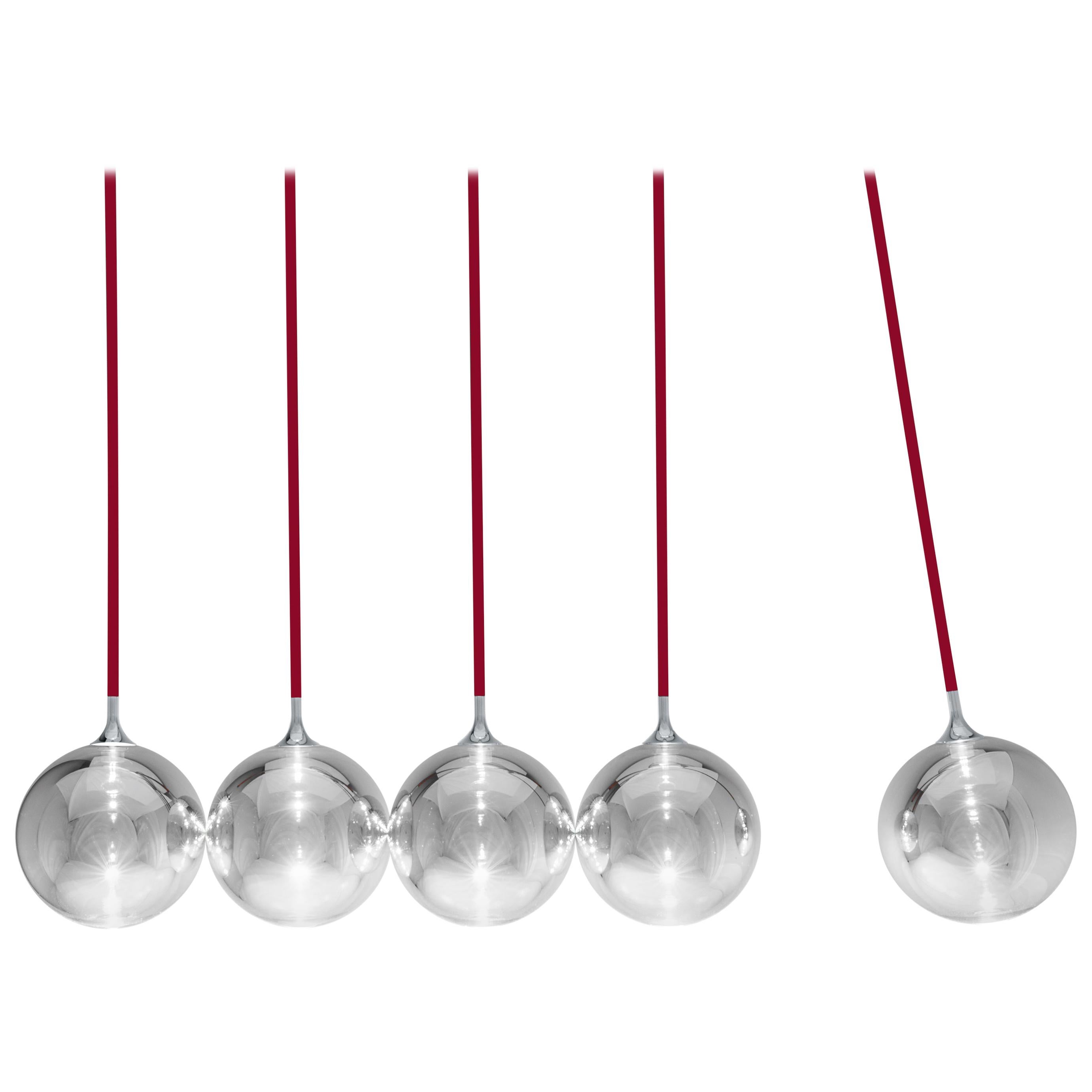 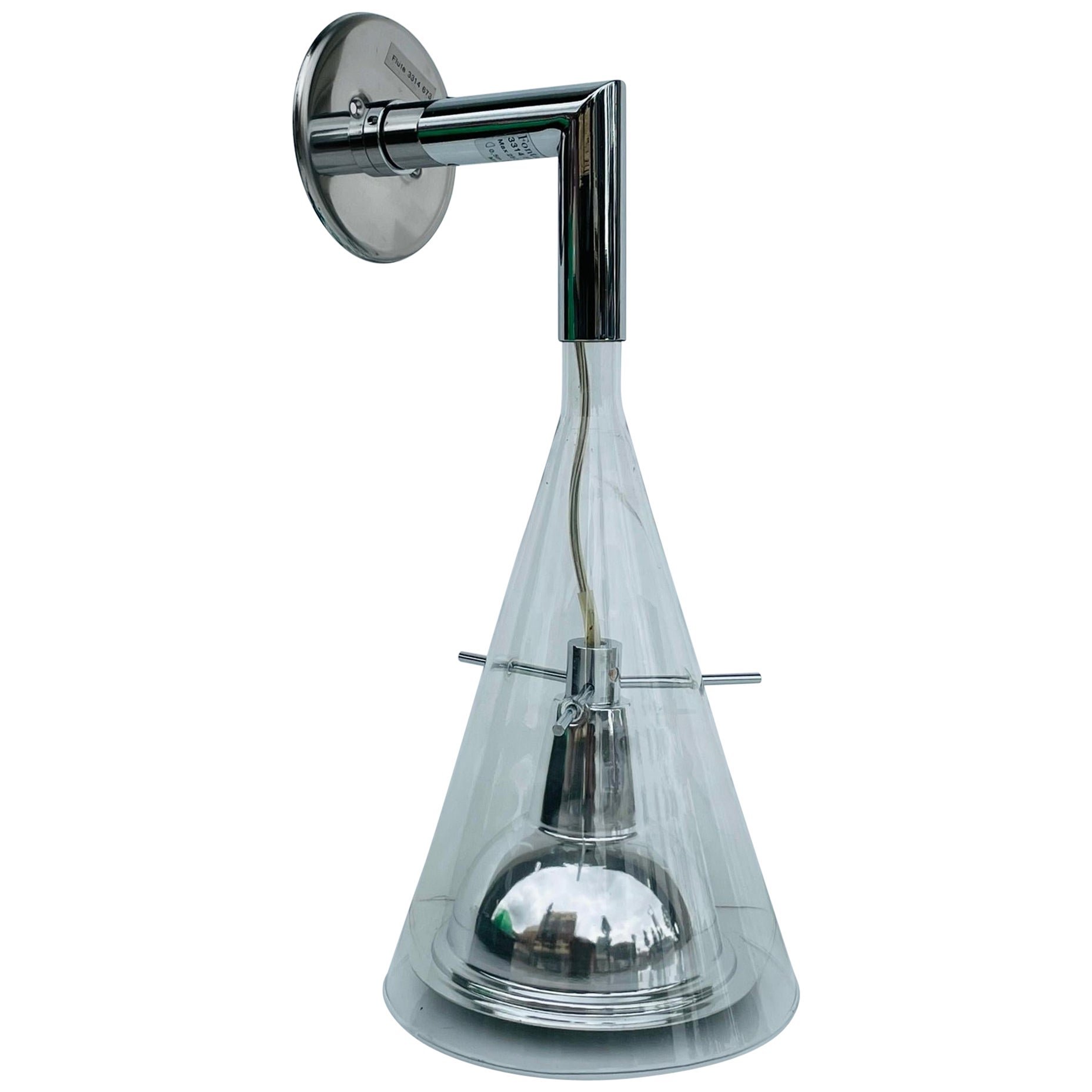 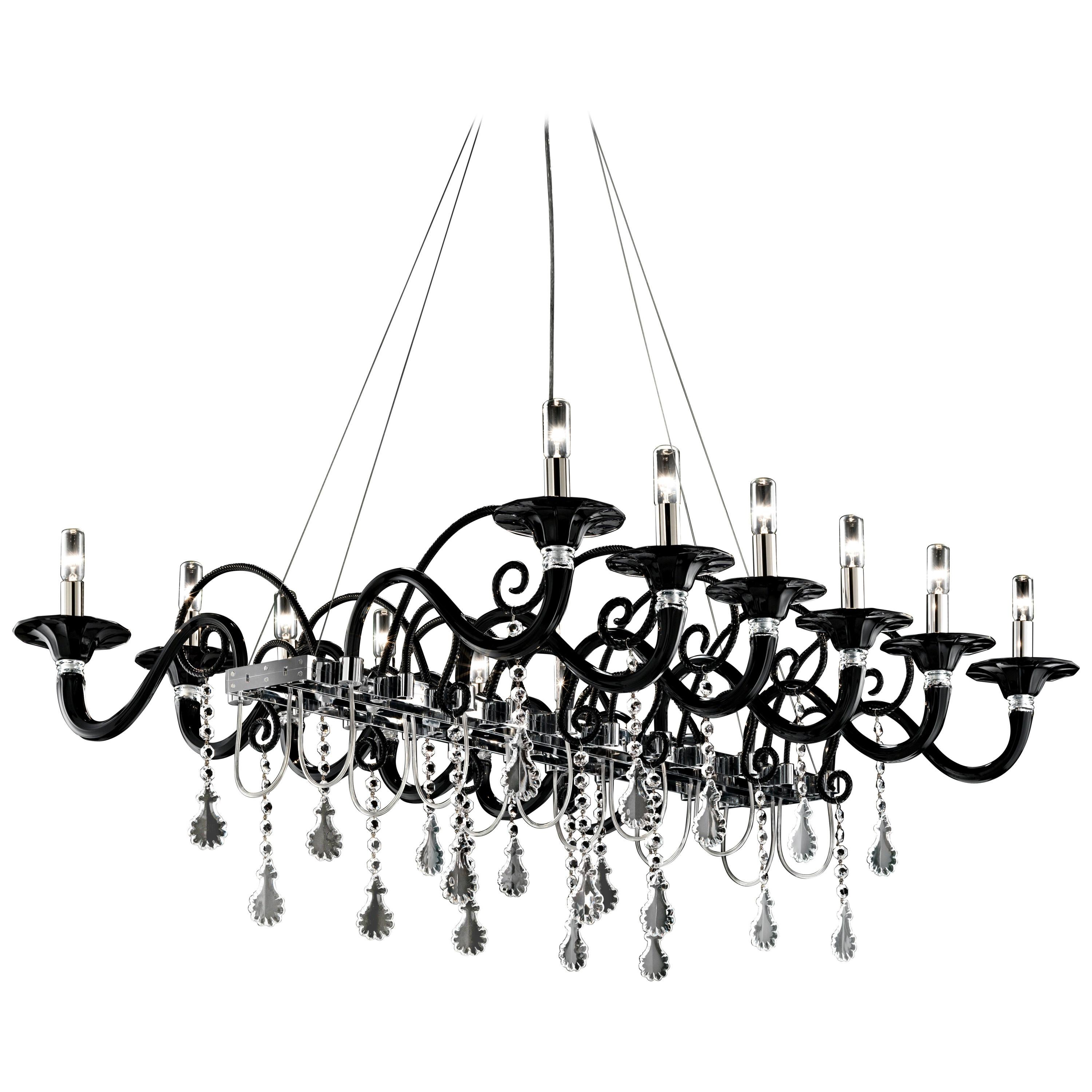 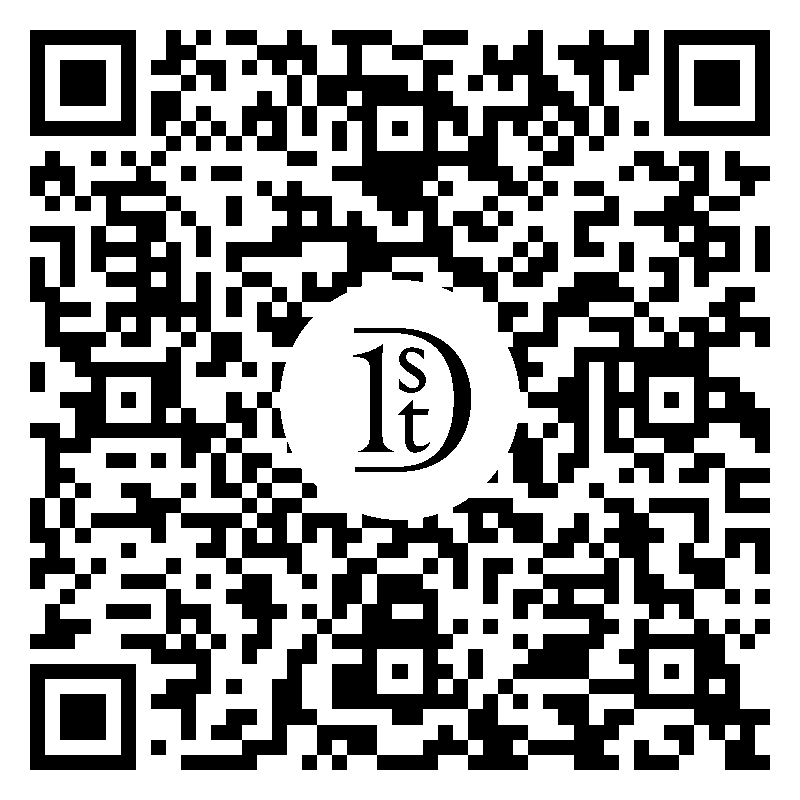 "Flute Magnum" is a pendant lamp, designed by Franco Raggi and manufactured by FontanaArte, with a transparent borosilicate glass diffuser, a reflector in polished chromed aluminum and a transparent power cable. Glass cone houses a reflector held by three chromed arms. The light reflects around the cone thus giving constant downward emission. Its lighting source is one 230W (HA) Eco Saver R7s/115. DIMENSIONS: Ø 7.1", H. 78.7" A glass cone holds the chromed aluminium reflector, supported by three slender metal rods. Equilibrium and lightness for this collection of lamps, available in floor and wall versions, for indirect light emission, and in a suspended version, for direct focused light. FRANCO RAGGI graduated in Architecture from Milan Polytechnic in 1969, and in the same year he started to work for Nizzoli Associati. From 1971-1975 he was editor of Casabella magazine and from 1977-1980 editor in chief of Modo design magazine, which he headed until 1983. In 1973, he orchestrated the first critical exhibition of Italian Radical Design on behalf of the IDZ, Internationales Design Zentrum, in Berlin. Between 1975-1977, he was coordinating secretary for the Visual-Architecture Arts Section at the Biennale in Venice. He was manager of the "Raccolta del Design" (Design Collection) section at the Triennale in Milan between 1979-1980, organizing various exhibitions in the early 1980s. He has designed architectures, layouts, exhibitions, books, scenery, rooms and items for famous international design companies. He has a longstanding partnership with FontanaArte. In the early 1980s, under the artistic direction of Gae Aulenti, with Daniela Puppa he designed the layouts for events starring the company. Since the late 80s he has created manysuccessful projects for FontanaArte: the collections Velo (1988-1989), Flute (1999) and Drum (2005). As an architect he has planned retail areas and showrooms (including FontanaArte), corporate headquarters (including the new Milan offices of Gianfranco Ferré), plus clinics and research centres. He has taught at the Faculties of Architecture at Pescara University and at the ISIA in Florence. Since 1995 he has coordinated the Department of Architecture at the IED in Milan. In his role as author he has taken part in a large number of exhibitions and held conferences and seminars all-over the world. 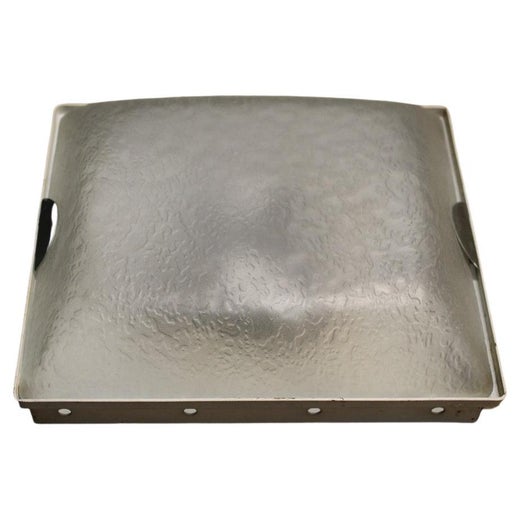 Best known for its elegant and innovative vintage lighting pieces, the Milan-based firm Fontana Arte pioneered one of the key features of 20th-century and contemporary Italian design: the union of artistry and industry wrought by partnerships between creative talents — chiefly architects — and entrepreneurial businesses. Fontana Arte is further distinguished by having had as artistic director, in succession, four of Italy’s most inventive modernist designers: Giò Ponti, Pietro Chiesa, French transplant Max Ingrand and Gae Aulenti.The bread and butter of the glassmaking company that Luigi Fontana founded in 1881 was plate-glass panels for the construction industry. In 1930, Fontana met Ponti — then the artistic director of the Richard-Ginori ceramics workshop and the editor of the influential magazine Domus— at a biannual design exhibition that became the precursor to today’s Milan Design Triennale, and the two hatched an idea for a furniture and housewares firm. Fontana Arte was incorporated in 1932 with Ponti as its chief of design. He contributed several lamps that remain among the company’s signature works, including the orb-atop-cone Bilia table lamp and the 0024 pendant — a stratified hanging sphere. The following year, Fontana Arte partnered with the influential Milan studio glassmaker and retailer Pietro Chiesa, who took over as artistic director. Chiesa’s designs for lighting — as well as for tables and items including vases and ashtrays — express an appreciation for fluidity and simplicity of line, as seen in works such as his flute-shaped Luminator floor lamp and the 1932 Fontana table — an arched sheet of glass that is held in the permanent collection of the Museum of Modern Art. Six years after Chiesa’s 1948 death, the École des Beaux Arts–trained Max Ingrand took over as head of design at Fontana Arte. Ingrand brought a similarly expressive formal sensibility to wares such as lamps and mirrors, but he also had a masterful eye for the manipulation of glass surfaces — whether they be cut, frosted, acid-etched or sand-blasted. His classic design is the Fontana table lamp of 1954, which has a truncated cone shade and curved body, both of which are made of pure, chic white-frosted glass. Following Ingrand, the often-audacious Italian architect Gae Aulenti served as the company’s artistic director from 1979 to 1996, and while she generally insisted that furnishings take second place aesthetically to architecture, she made an exception for Fontana Arte pieces such as the Tavolo con Ruote series of glass coffee and dining tables on wheels, bold lighting pieces such as the Parola series and the Giova, a combination flower vase and table lamp. As a key incubator of modern design under Aulenti’s tenure, Fontana Arte remained true to its long-held commitment — creating objects that have never been less than daring.
About the Seller
4.8 / 5
Located in Brooklyn, NY

Diamond Seller
These expertly vetted sellers are 1stDibs' most experienced sellers and are rated highest by our customers.
1stDibs seller since 2015
1,496 sales on 1stDibs
Typical response time: 2 hours
More From This Seller

Firmamento Milano Red Newton Pendant Lamp by Franco Raggi
By Firmamento Milano, Franco Raggi
Located in Milan, Milano
Please note that VAT is not included in the price. The image of the kinetic energy that is transmitted invisibly across the five shiny balls when the impact of the first ball moves ...
Category

$1,250
Mood Taif 7023 Chandelier in Glass, by Franco Raggi
By Franco Raggi, Barovier&Toso
Located in Venice, IT
The arms of the Mood Taif chandeliers are arranged horizontally and do not gravitate around a centre - as is usually the case. Three versions, different in number of lights (8-, 12- ...
Category

From $26,900 / item
Mood Taif 7022 Chandelier in Glass, by Franco Raggi
By Franco Raggi, Barovier&Toso
Located in Venice, IT
The arms of the Mood Taif chandeliers are arranged horizontally and do not gravitate around a centre - as is usually the case. Three versions, different in number of lights (8-, 12- ...
Category

From $19,000 / item
Domo Nevada 7033 Chandelier in Glass with White Shade, by Franco Raggi from
By Franco Raggi, Barovier&Toso
Located in Venice, IT
An elegant breakdown of the Classic chandelier, reminiscent of the Nevada chandelier. Available in three sizes, with 8, 12 or 16 lights and with white or black lampshades, it has chr...
Category

Domo Nevada 7033 Chandelier in Glass with White Shade, by Franco Raggi from