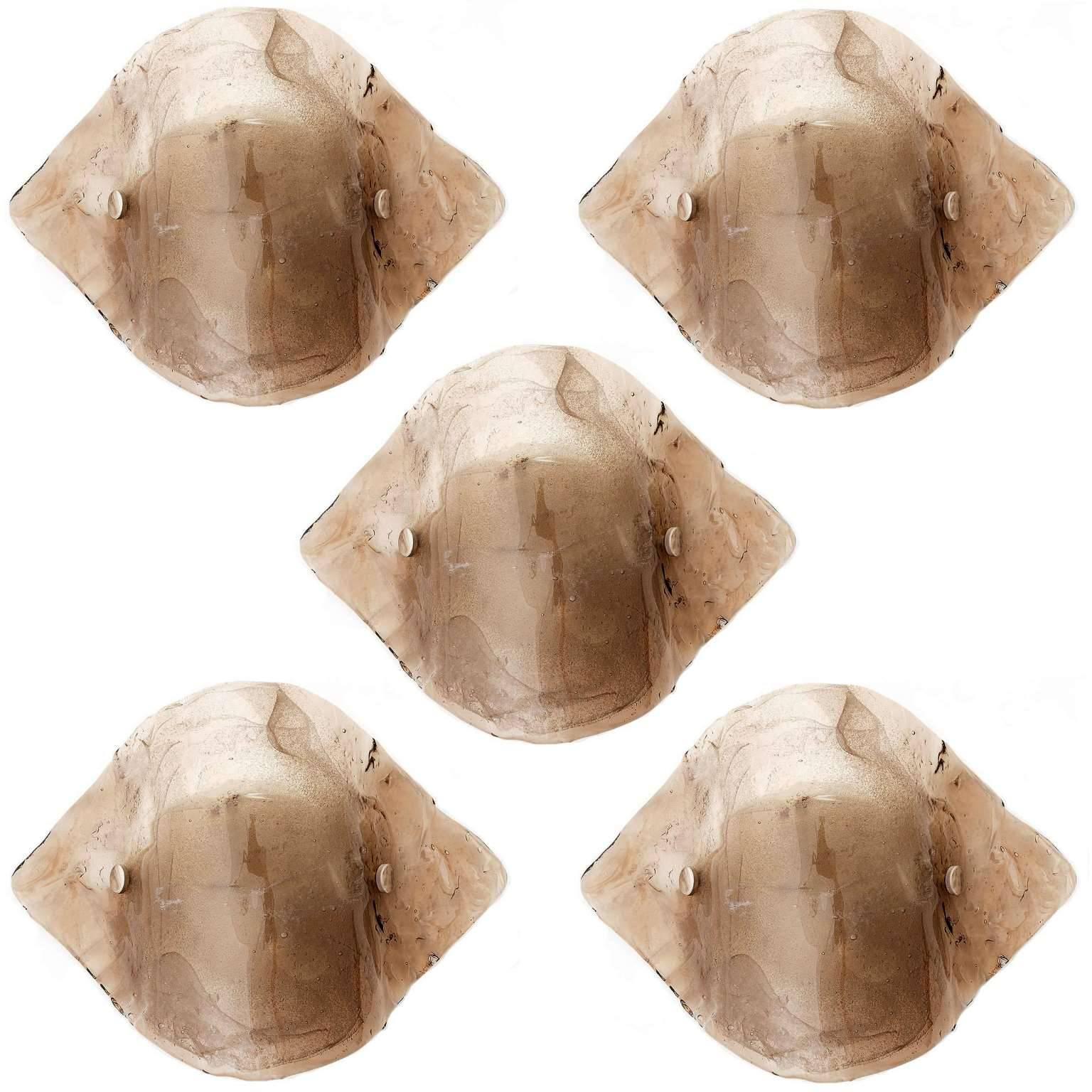 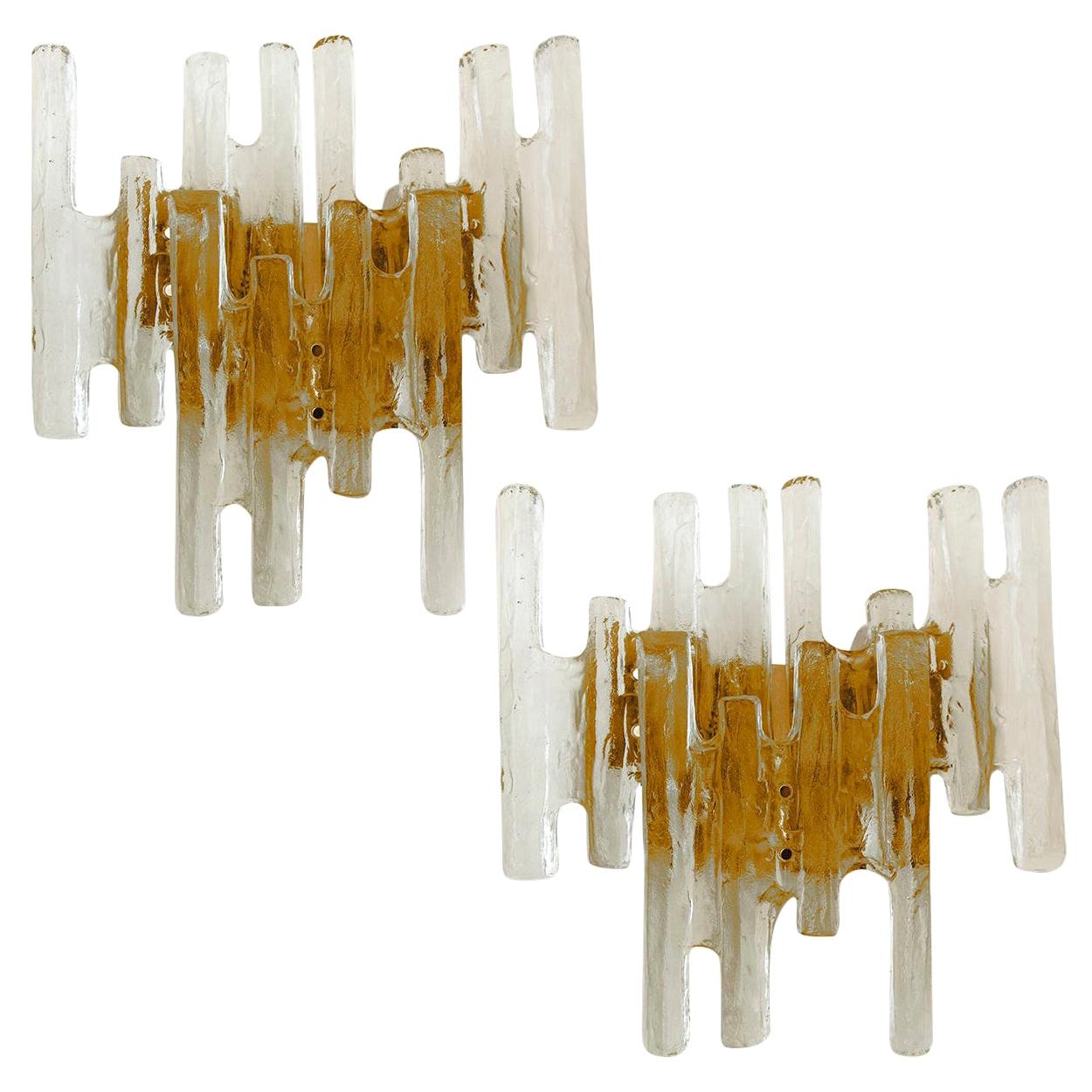 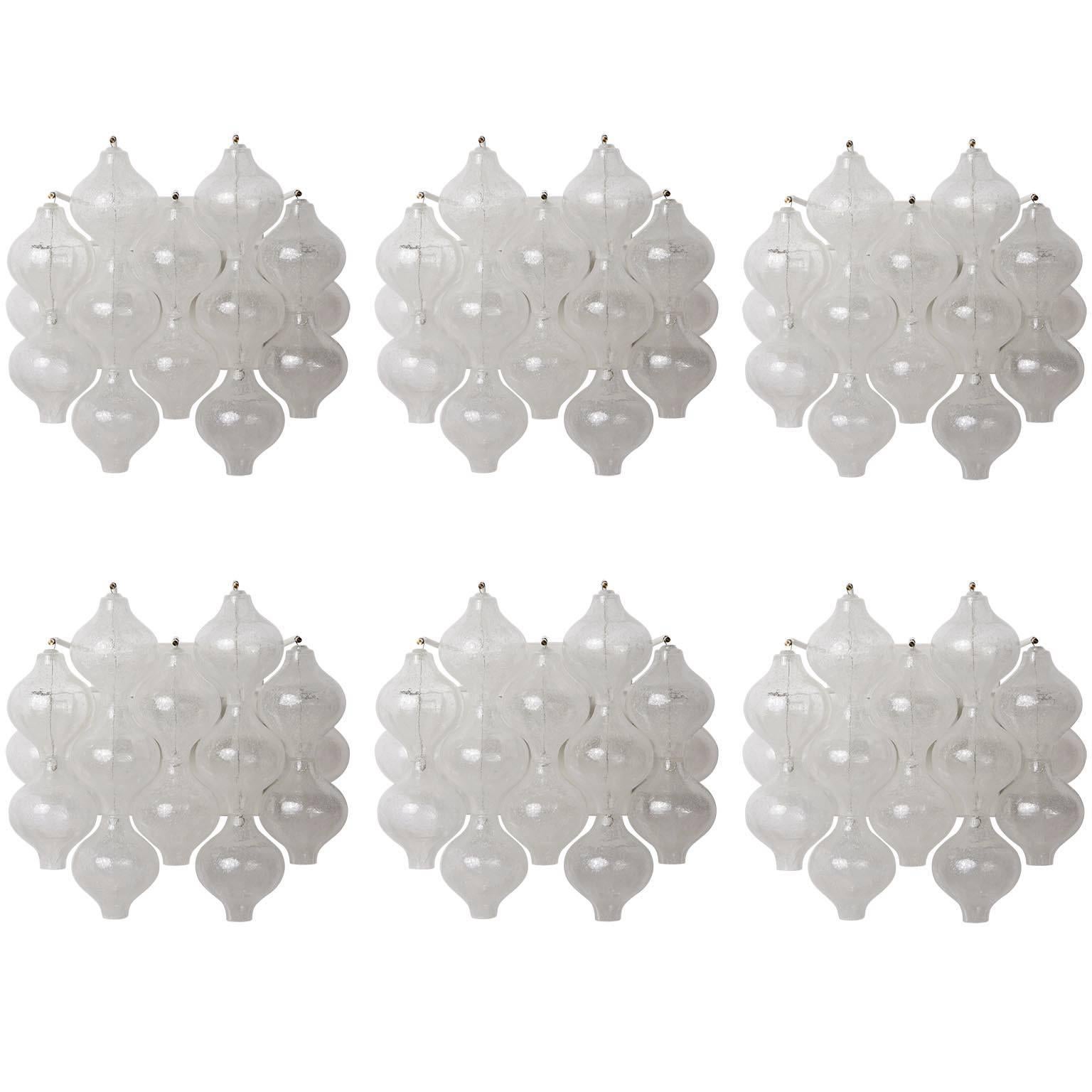 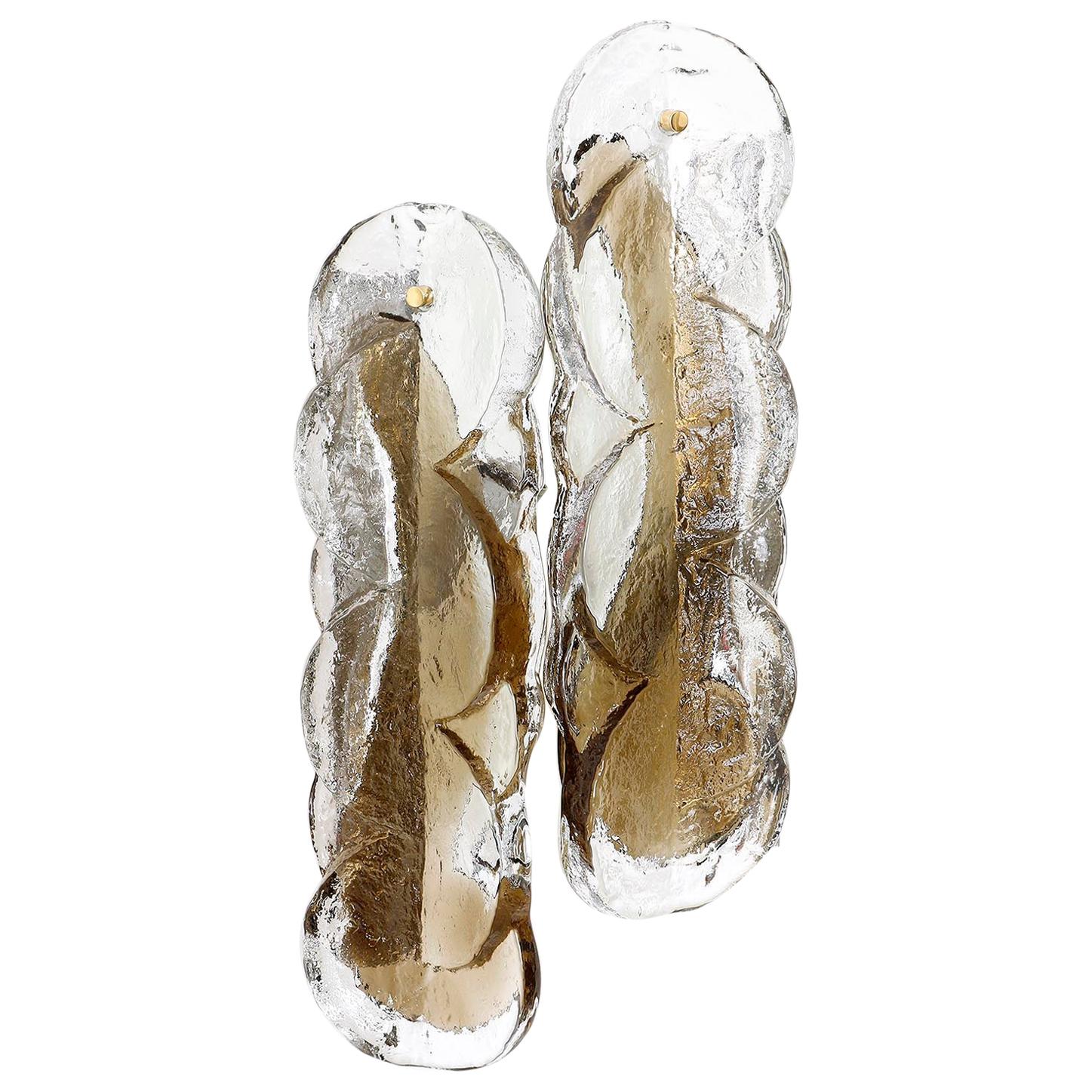 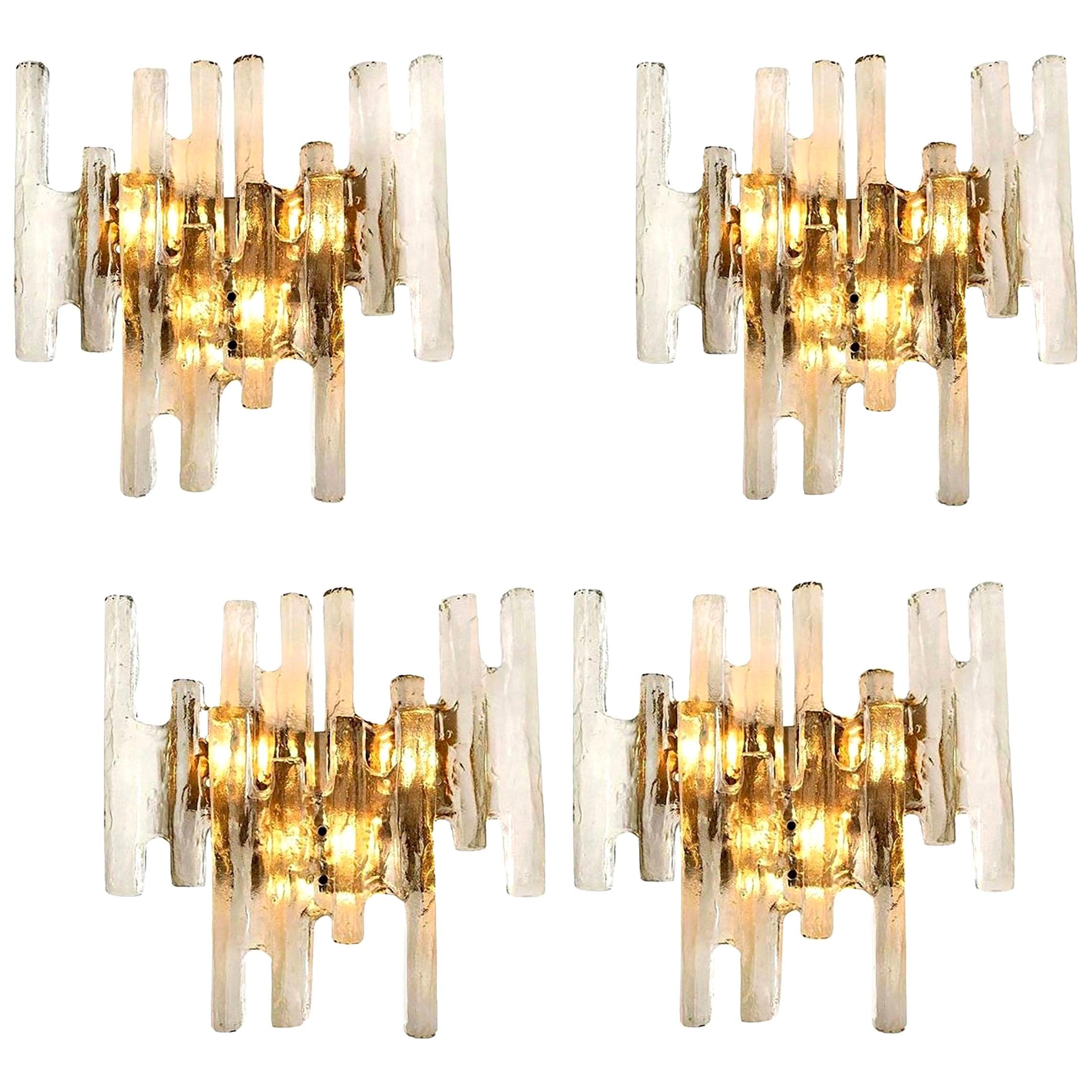 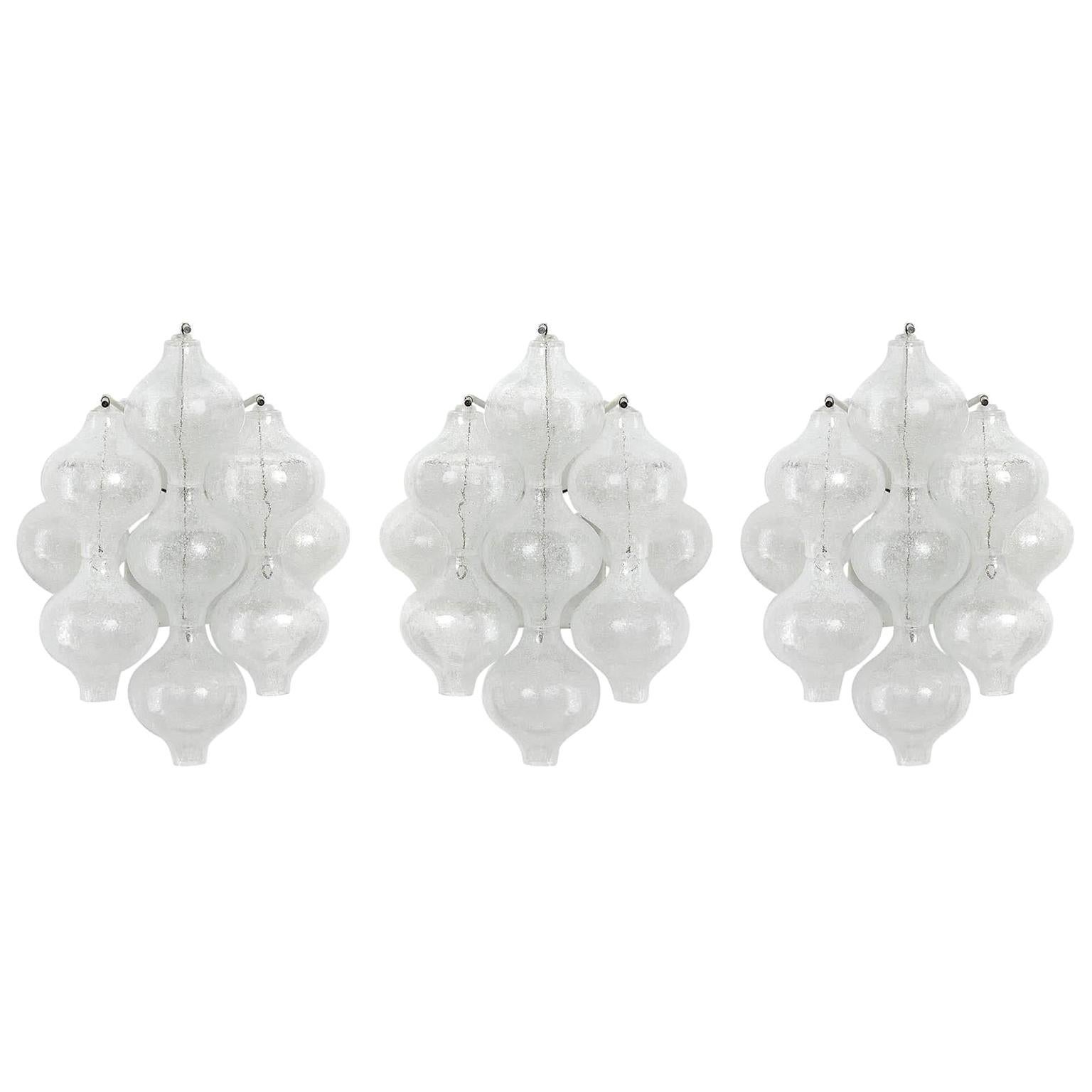 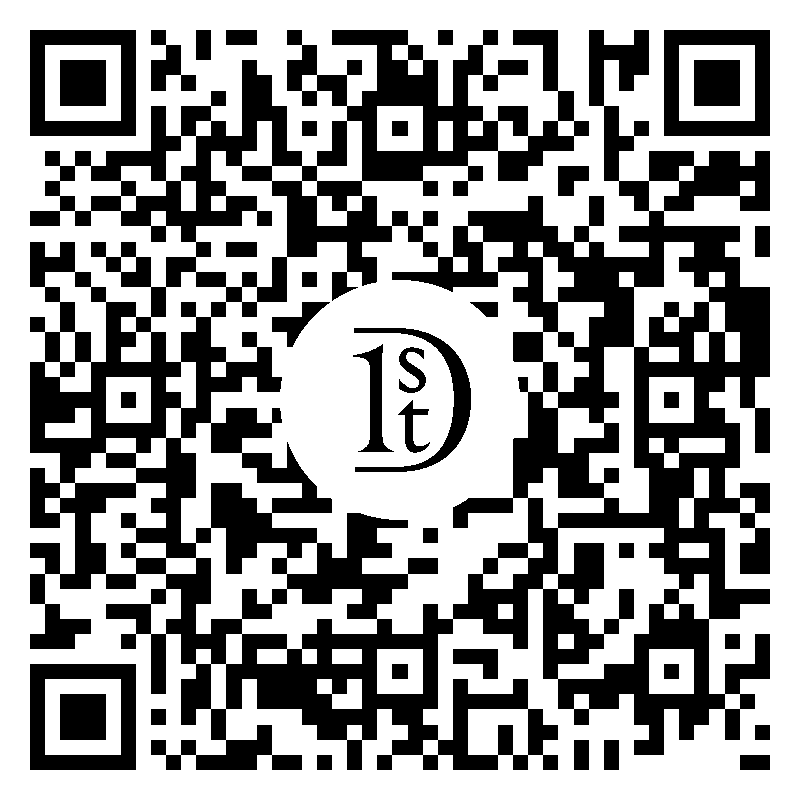 A pair of ice glass wall lights by Kalmar, Austria, manufactured in midcentury, circa 1970 (late 1960s or early 1970s). Labeled with Kalmar Franken KG. Three frosted icy glass blocks are mounted on a golden enameled metal frame. Each sconce has two sockets for small screw base Edison bulbs E14 and it is compatible with the US/UK/ etc. standards. It is possible to install this fixture in all countries (US, UK, Europe, Asia, Canada,) although it may be necessary to purchase different light bulbs suitable to local electricity. It also can be used with a dimmer. 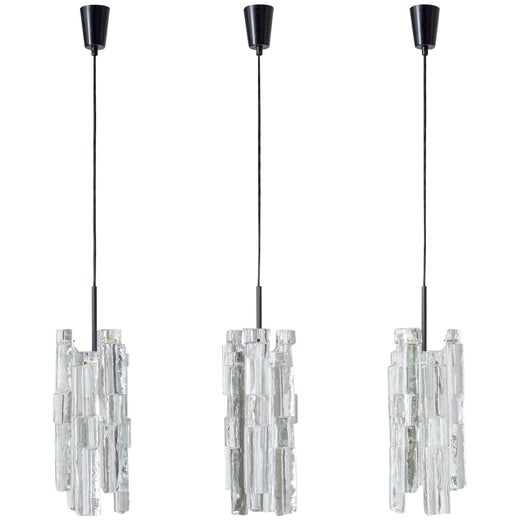 In 1881, Julius August Kalmar founded Kalmar, a Viennese company that produced handcrafted objects of cast bronze. Kalmar developed a fine reputation and exhibited internationally often, but it was Kalmar’s son, Julius Theodor Kalmar, who took over in 1913 and made the company shine with its modernist lighting.Having studied at the Birmingham School of Art and Design and under the Austrian architect Josef Hoffmann at the Vienna School of Applied Arts, Julius was deeply inspired by the shift to modernity taking place in Europe and sought to work with the leading architects and designers of his time, including Austrian Werkbund architects Josef Frank and Oskar Wlach as well as Ernst Plischke, Clemens Holzmeister and Oswald Haerdtl. Similar to the Wiener Werkstätte cooperative cofounded by Hoffmann that prized materials, form and function, Kalmar viewed his company’s lighting fixtures as “quite humble things” meant to “fit in and serve their purpose of functionally illuminating spaces without glare.”In 1925, Kalmar began selling in Haus und Garten, the forward-looking decor shop founded by Frank and Wlach. By 1931, a close partnership with the Austrian Werkbund association of architects, artists and craftsmen allowed the company to realize its vision of early 20th-century modernity — a distinctly Viennese pairing of traditional workmanship with contemporary technology. These collaborations included chandeliers and other fixtures using traditional materials such as glass, bronze and brass while focusing on function over ornamentation. As the company grew, so too did the scope of its projects, and soon Kalmar was installing extravagant chandeliers for the Vienna Opera, the Burgtheater, Vienna stock exchange and other sites.Under the guidance of Rudolf Calice, Julius Theodor Kalmar’s son-in-law, the 1960s saw Kalmar’s popularity grow, thanks in part to the success of more decorative pieces like the ice-glass fixtures created with Austrian sculptor Karl Gruber. Thomas Calice, the great-grandson of Kalmar’s founder, led the company in the 1990s and its expansion to international lighting projects while shifting away from serial production. In 2009, Thomas’s son August Chalice established Kalmar Werkstätten to produce fixtures that reference the Kalmar archives but also feature updates on the iconic designs. Kalmar continues to produce bespoke fixtures while also working on custom lighting projects around the world, from cruise ships to the Burj Khalifa.On 1stDibs, find a collection of vintage Kalmar lighting that includes wall lights, floor lamps and other fixtures.
About the Seller
5 / 5
Located in Graz, Austria

Always on the lookout for beautiful, rare and high-quality 20th-century design, HPS DESIGN INTERIOR offers furnishings made in the 1950s to 1970s in Austria, Italy, Germany and Scandinavian, as well as selected Jugendstil, Art Nouveau and Art Deco pieces from the 1900s and Bauhaus items from the 1930s. Its inventory is predominately li...

Diamond Seller
These expertly vetted sellers are 1stDibs' most experienced sellers and are rated highest by our customers.
Established in 2014
1stDibs seller since 2014
851 sales on 1stDibs
Typical response time: <1 hour
More From This Seller

$1,068
Pair of Midcentury Austrian Ice-Glass "Puck" Wall Sconces by Kalmar, 1970s
By Kalmar Lighting, J.T. Kalmar
Located in Badajoz, Badajoz
Stunning Austrian midcentury "Kalmar" wall sconces, model "Puck". These sconces were made during the 1970s in Austria by Kalmar. Each wall sconce is composed by 2 units of Ice-Glass...
Category

$2,131 / set
Pair of Midcentury Austrian Ice-Glass "Sierra" Wall Sconces by Kalmar, 1970s
By Kalmar Lighting, J.T. Kalmar
Located in Badajoz, Badajoz
Lovely Austrian midcentury "Kalmar" wall sconces, model "Sierra". These pieces were made during the 1970s in Austria by Kalmar. Each wall sconce is composed by 2 units of Ice-Glass ...
Category