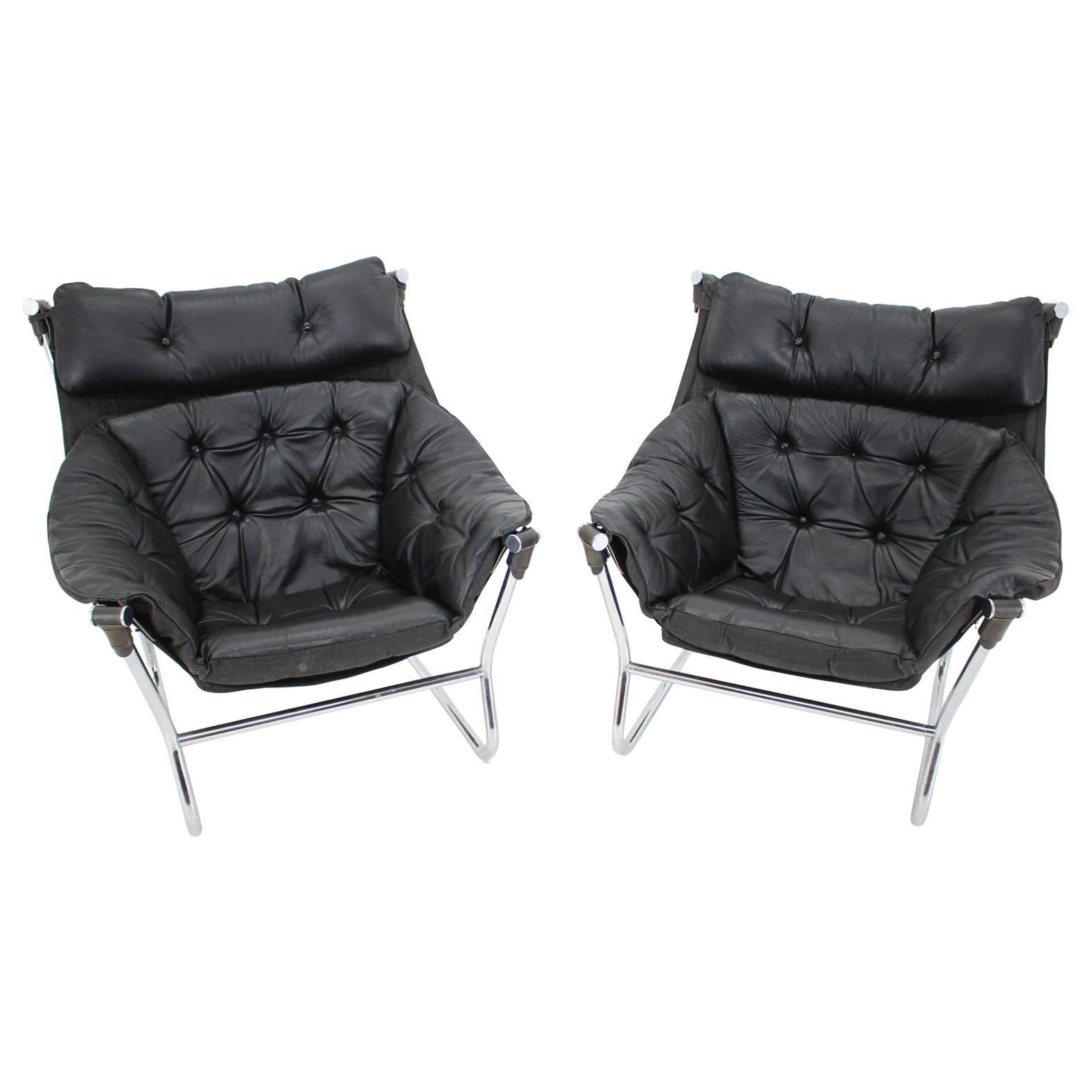 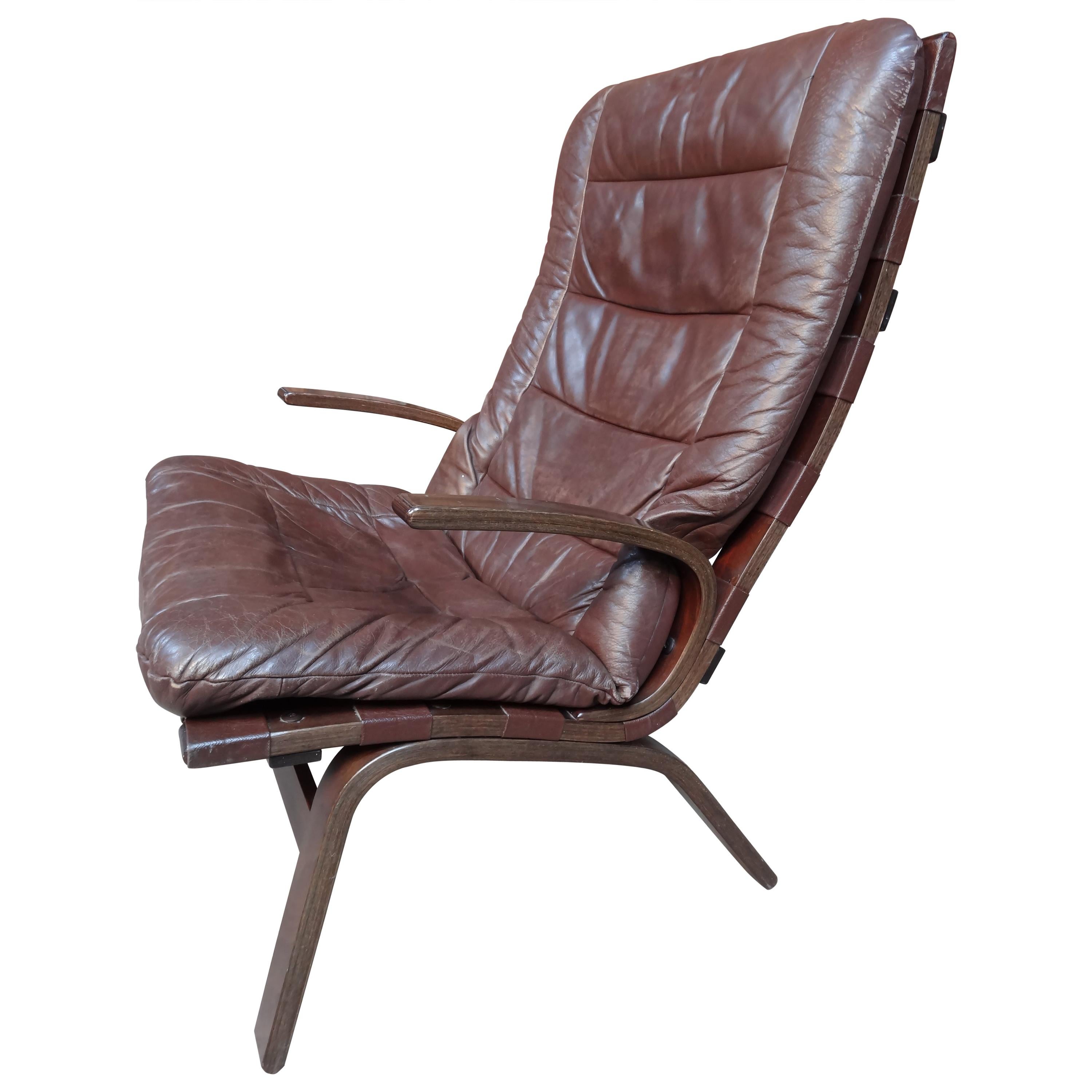 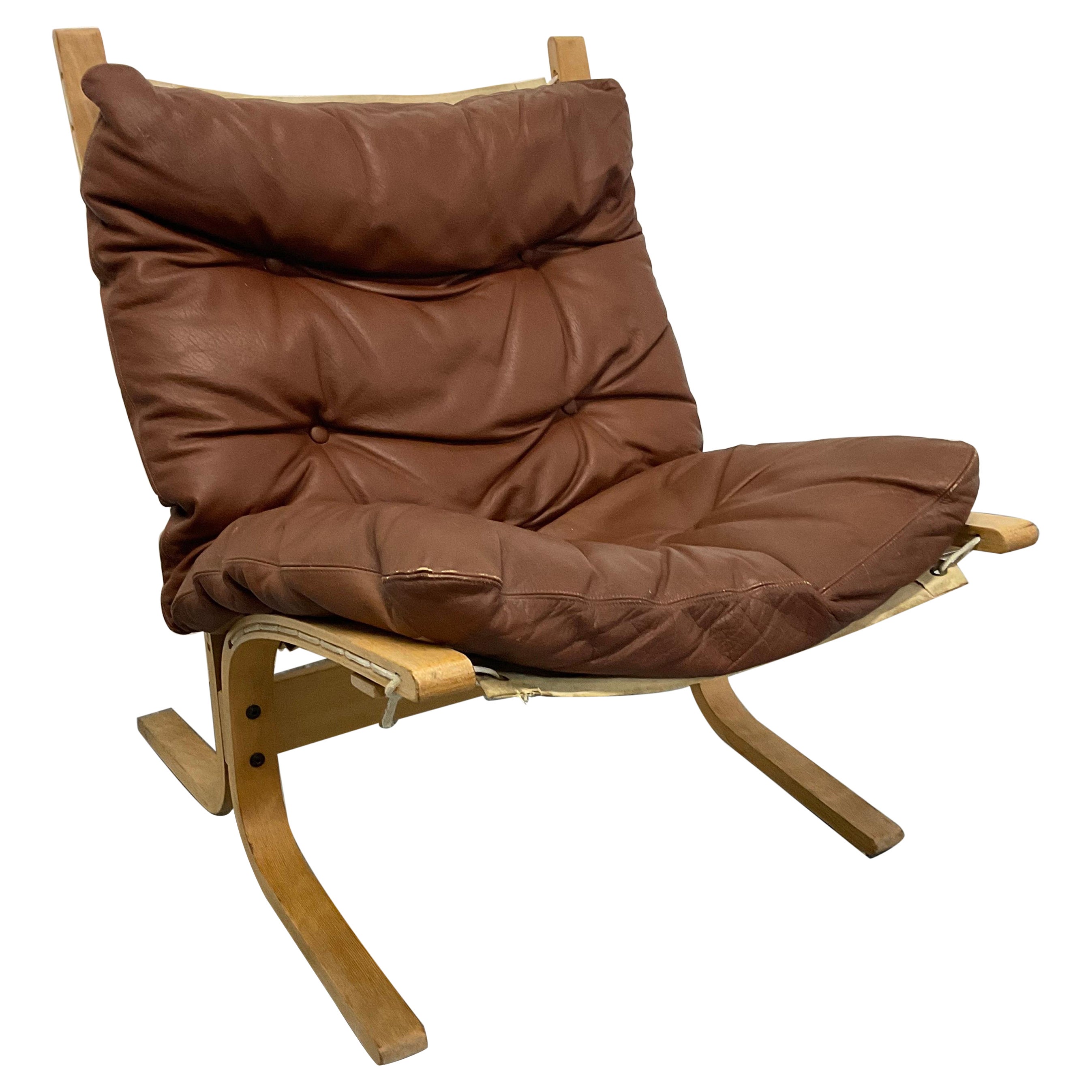 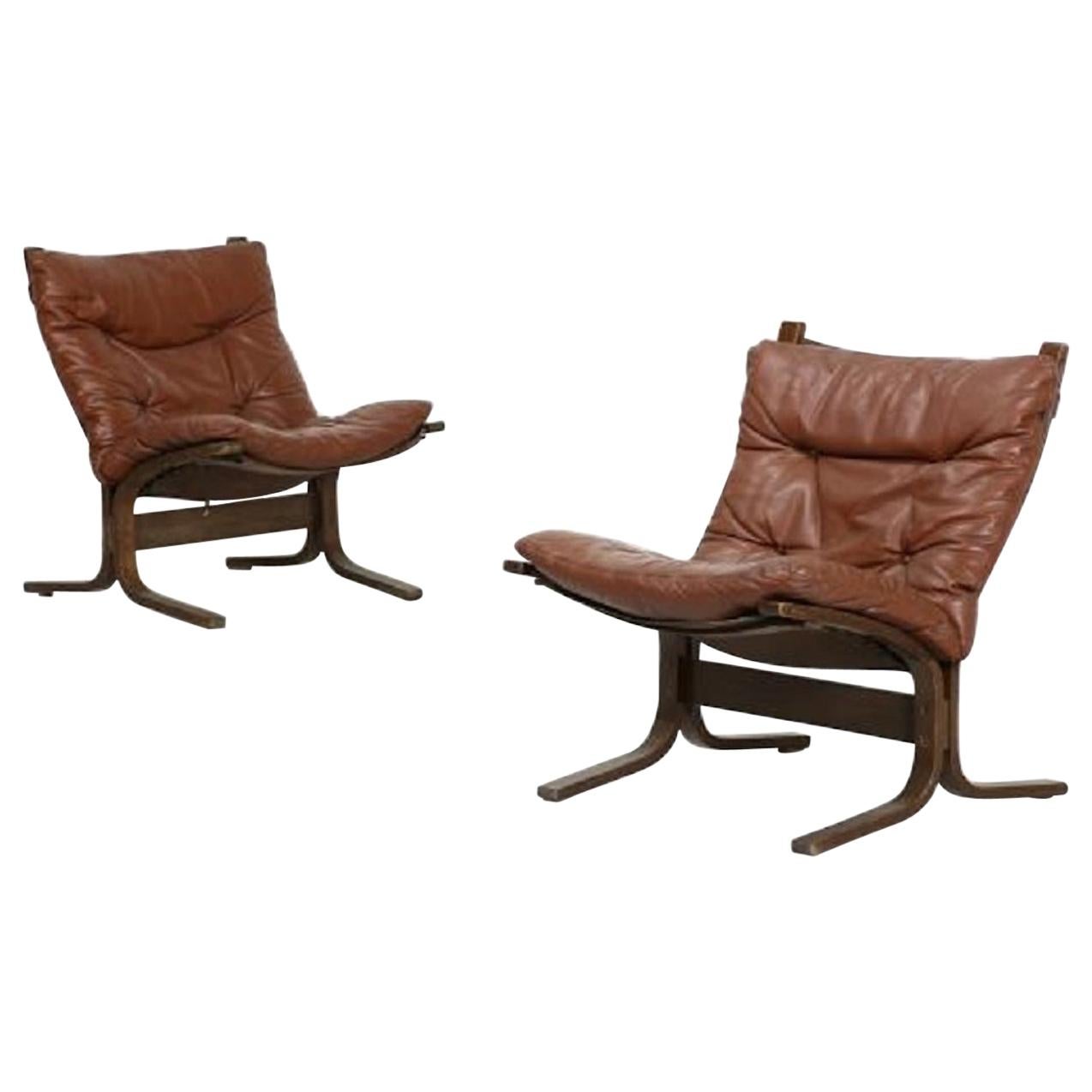 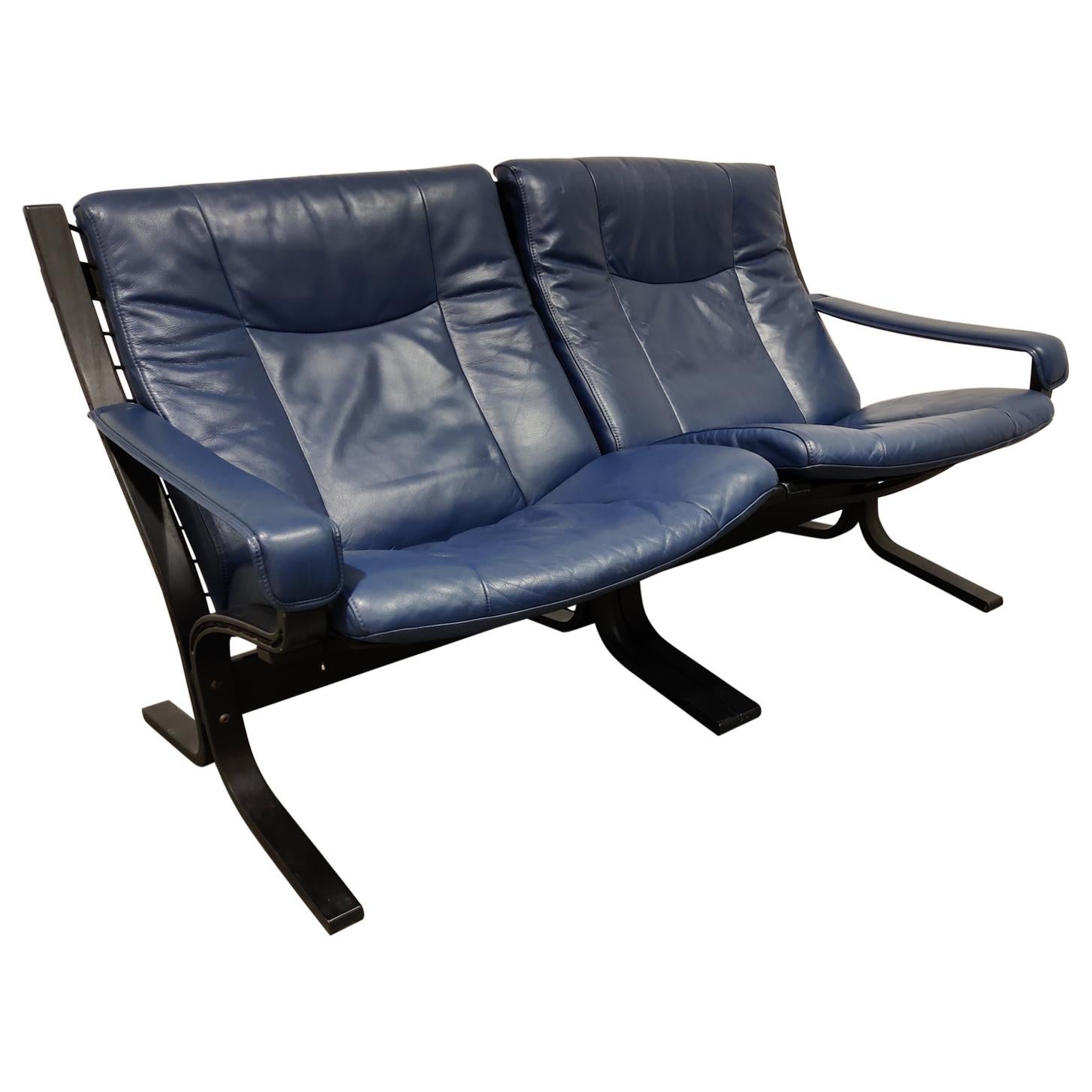 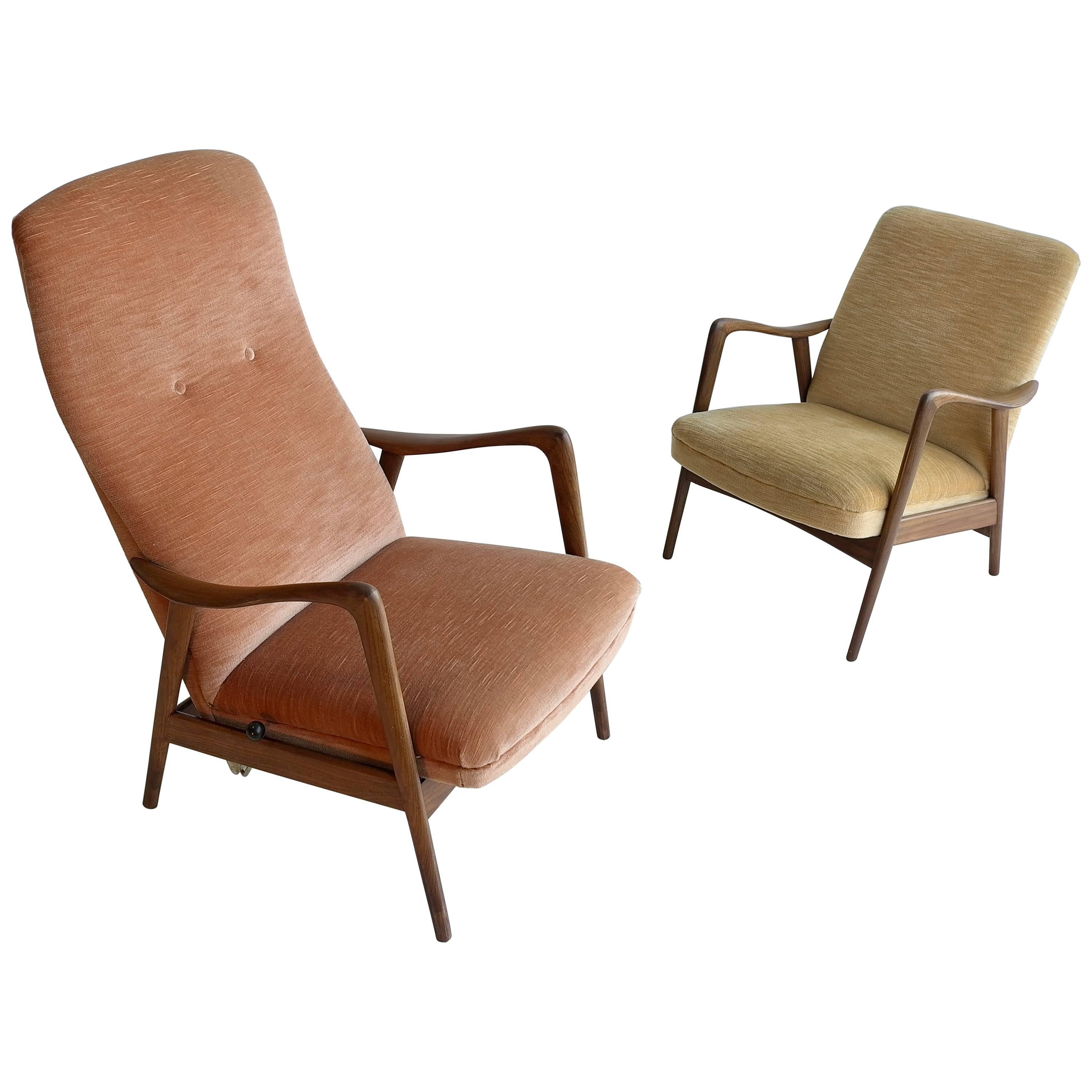 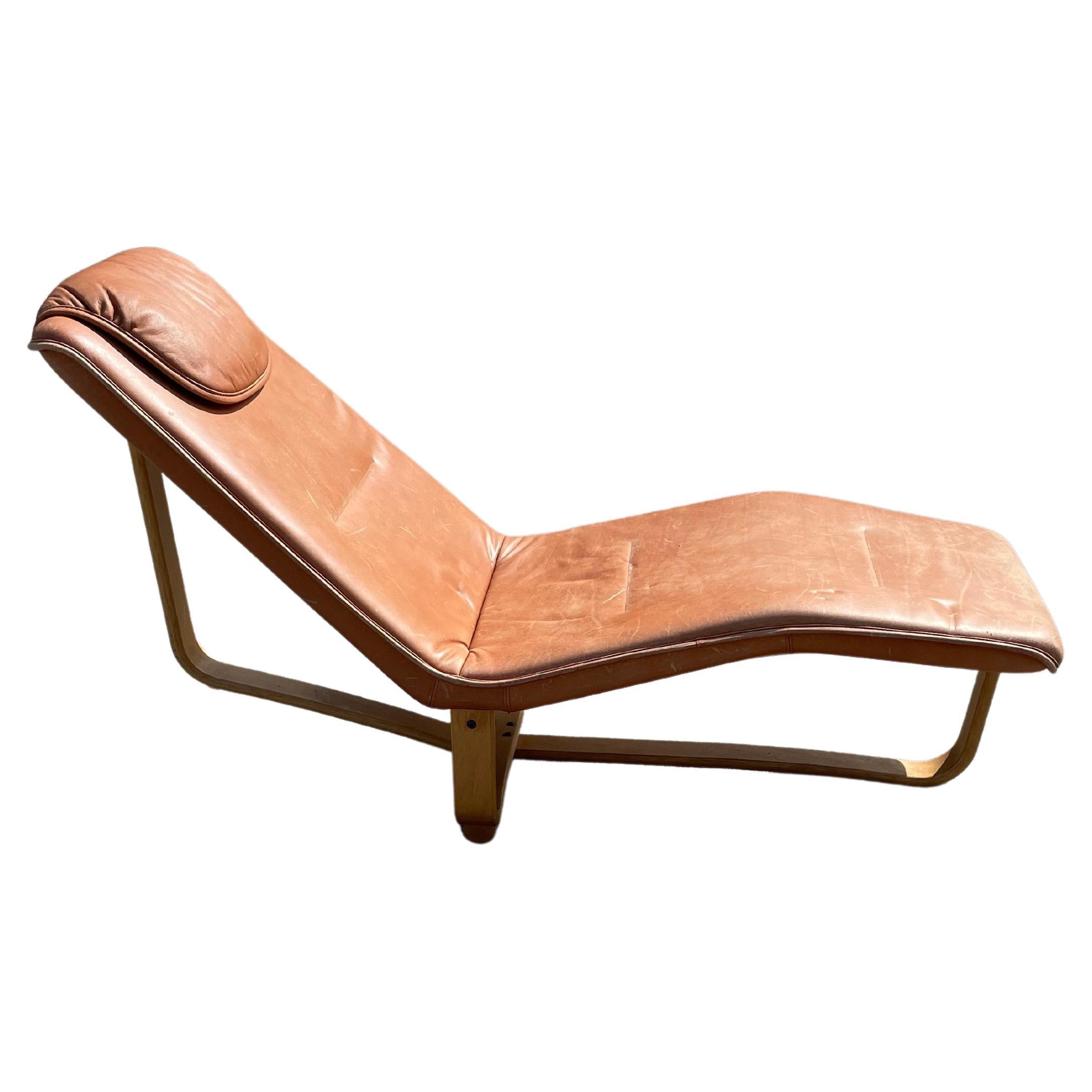 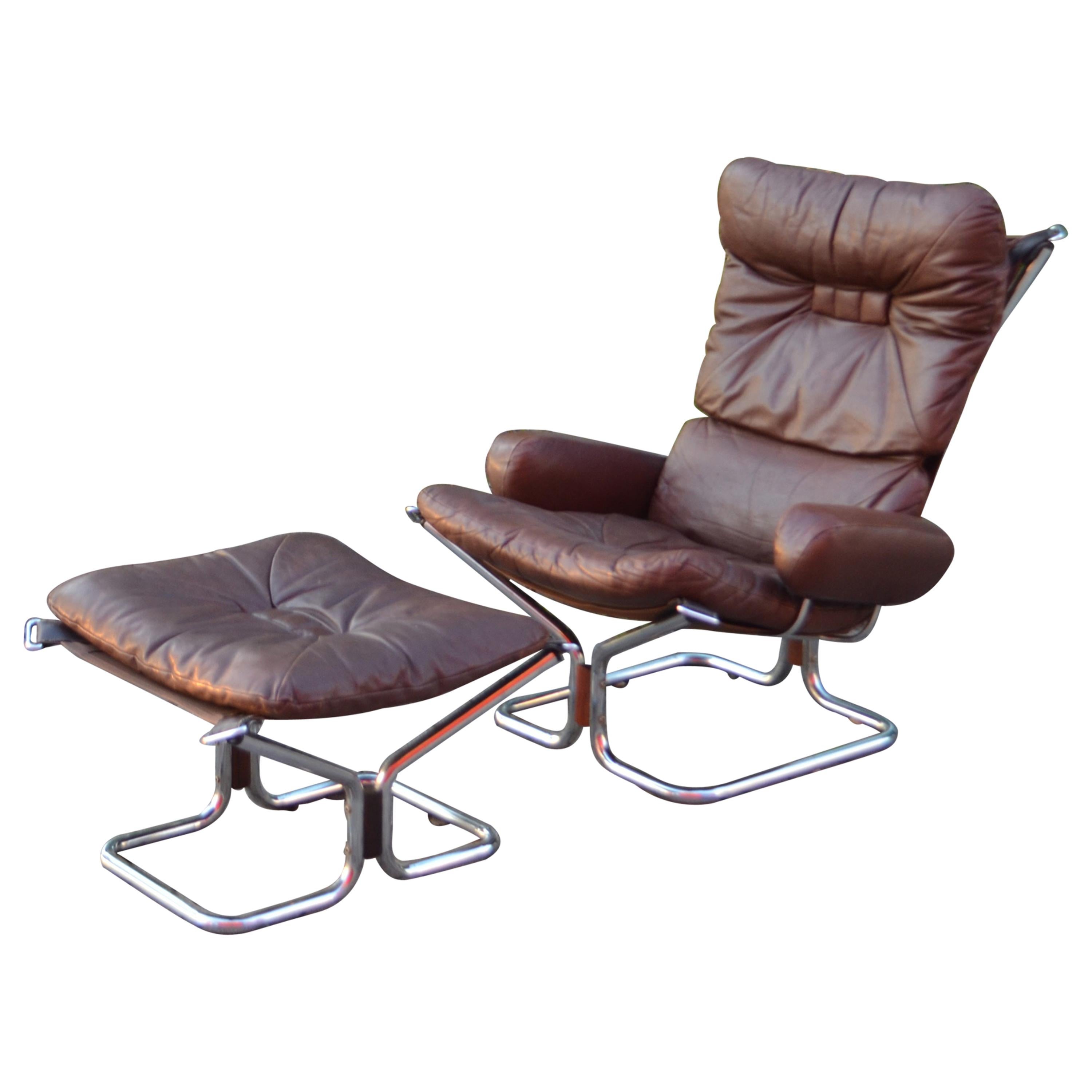 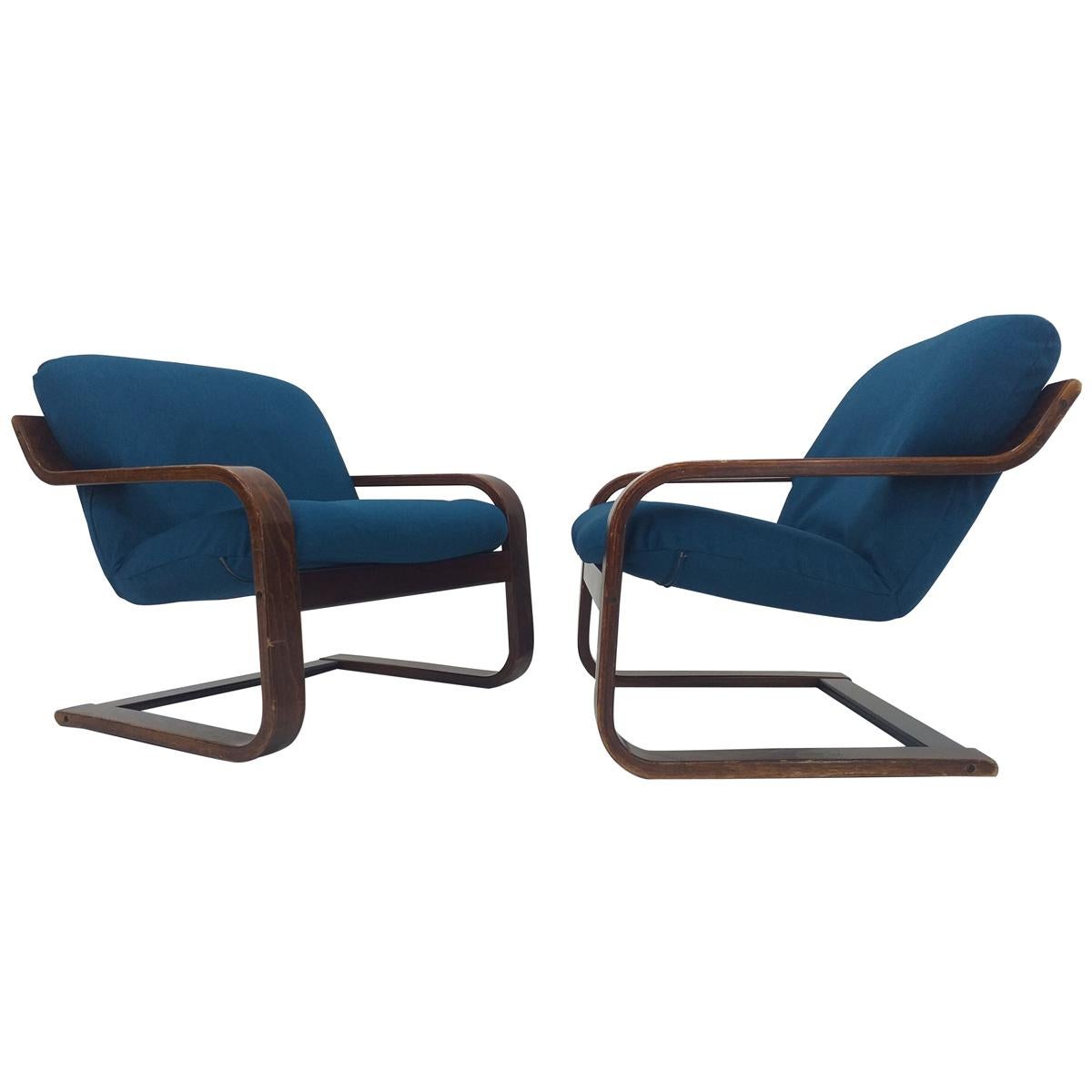 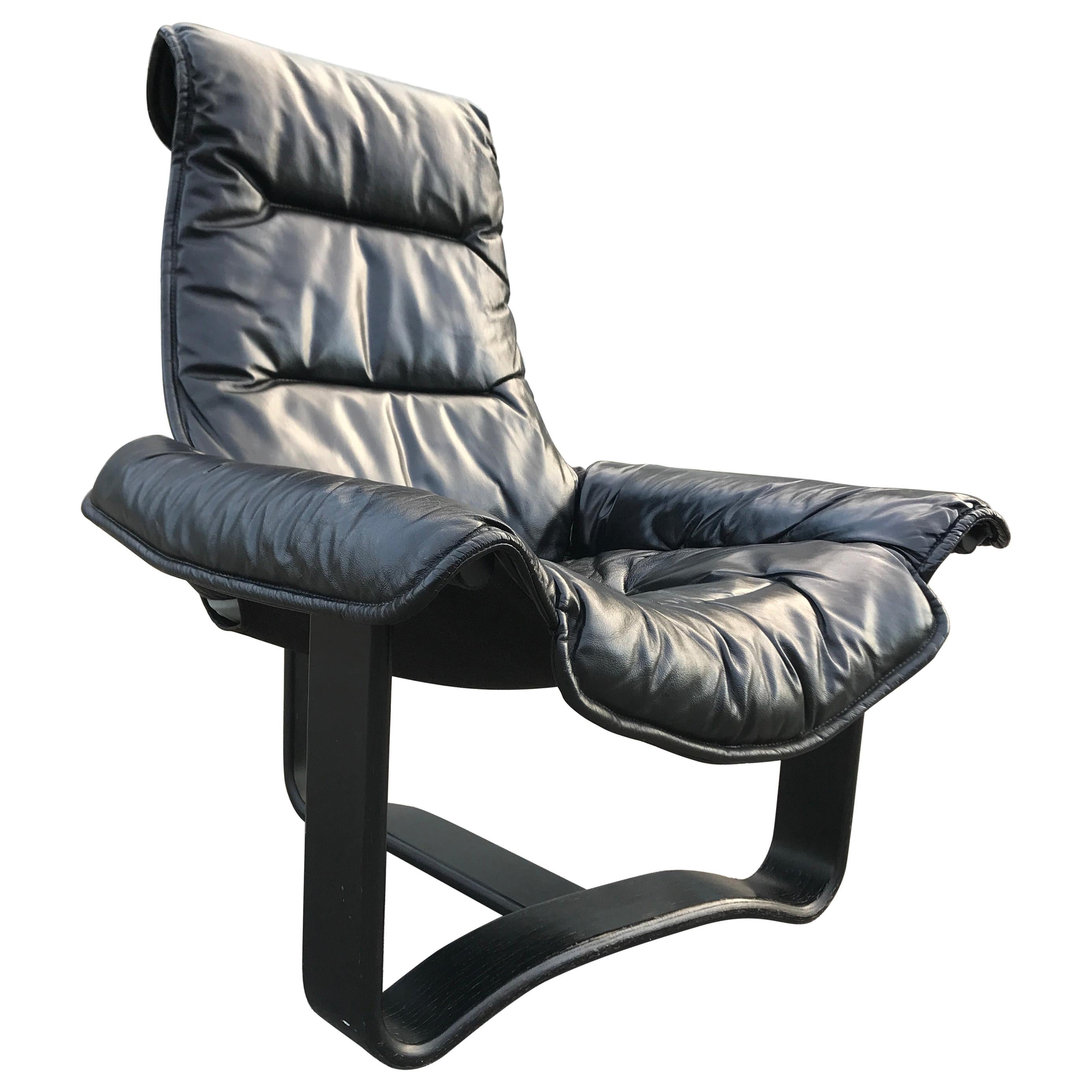 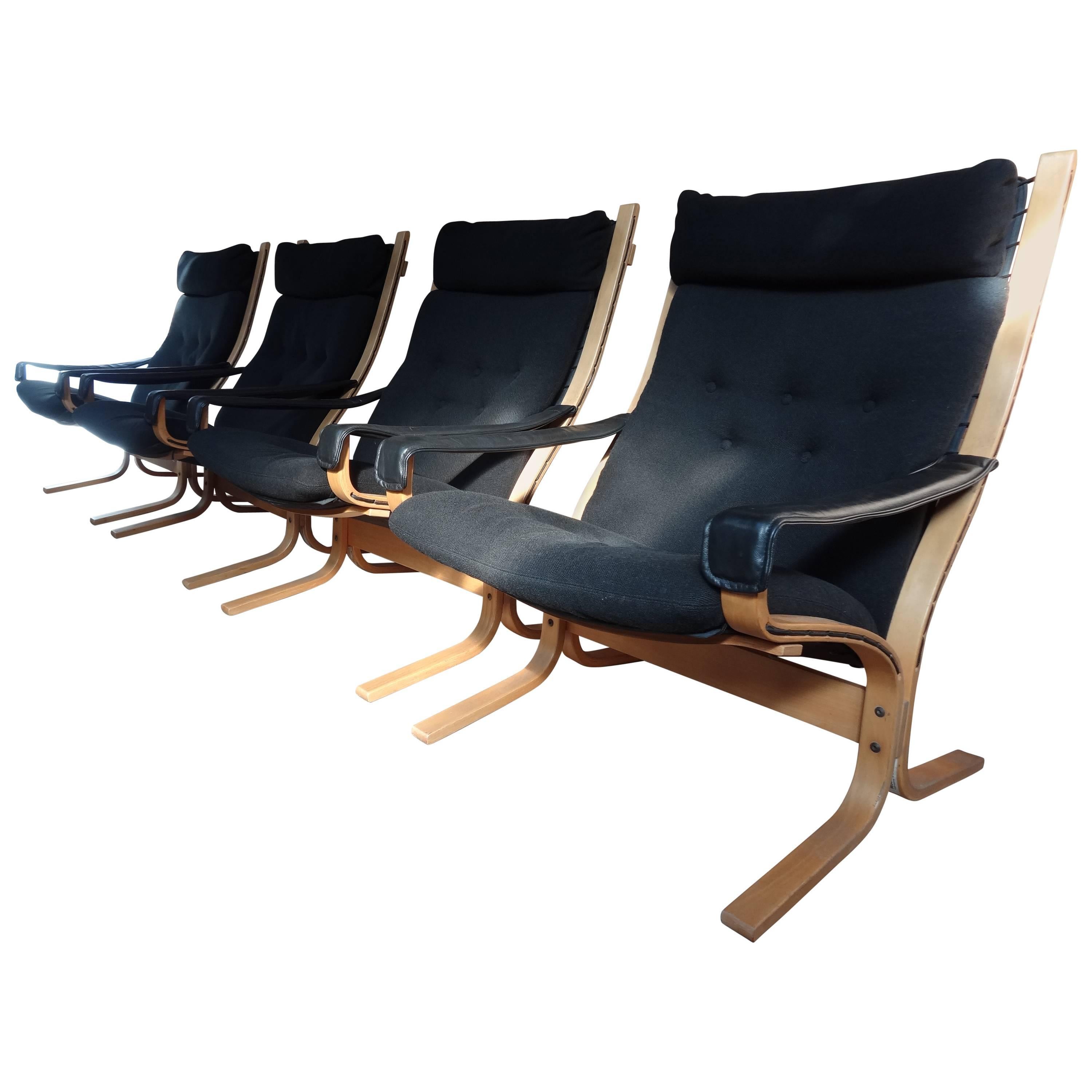 Plywood Armchair by Ingmar Relling for Westnofa , 1970s, Set of 2 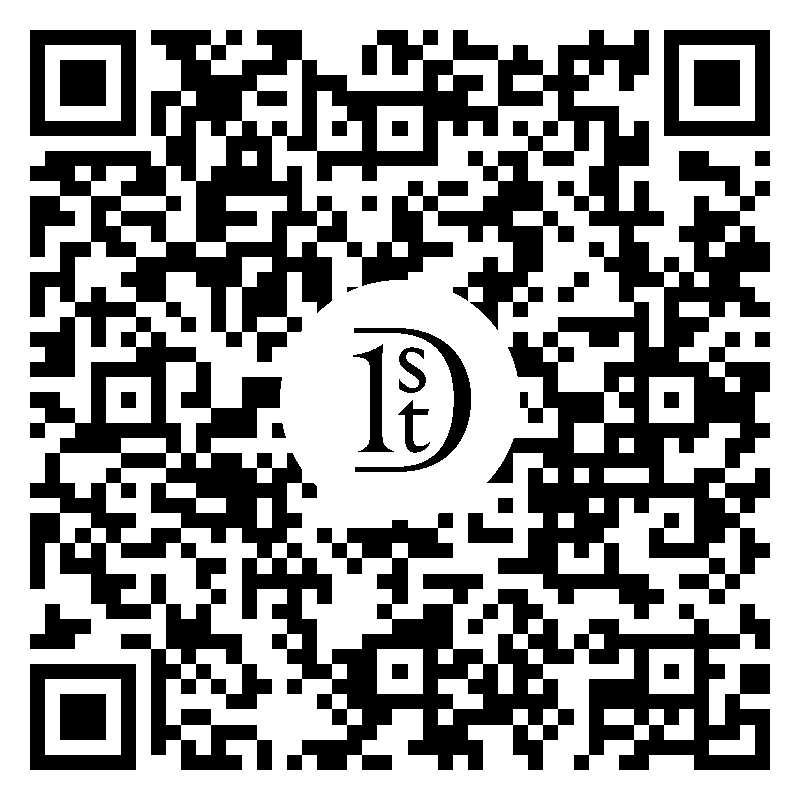 Armchair of Norwegian manufacture produced by Westnofa in the 1970s on a design by Ingmar Relling. Hot curved plywood frame. A thick cotton seat on which it is placed, a padded cushion lined with raw cotton with stitched leather buttons. Leather armrests. Good general conditions, some signs due to normal use over time.   Dimensions: Length 65 cm, depth 65 cm, height 85 cm, seat height 46 cm. 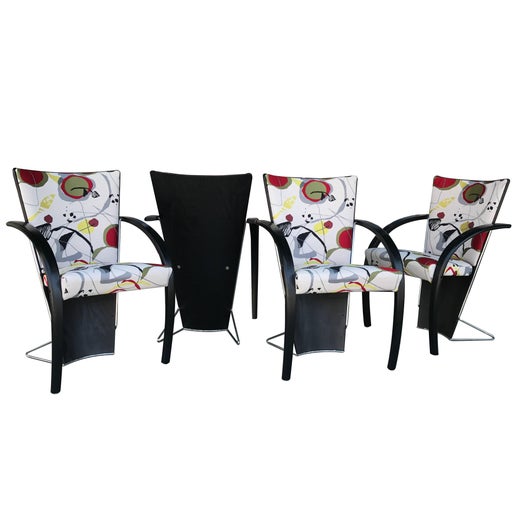 While Norway comprises something of an unsung chapter in the history of Scandinavian modernism, an export company called Westnofa shouldn’t be overlooked. It represented a collective of the country’s leading manufacturers to promote and export their furniture worldwide. Westnofa was key to the success of Norway’s mid-century designers and furniture brands, and fostered the growth of entities that might otherwise be unknown to today’s design aficionados.

Norway’s furniture factories were largely destroyed during World War II, and while the country’s sophisticated works — designed in teak, pine and other prized woods — had earned a place in Scandinavian modernism, its output was overshadowed by big names such as Alvar Aalto and Arne Jacobsen who’d earned icon status in Finland and Denmark, respectively. Westnofa, a name derived from “West Norway Factories,” took shape in the late 1950s in order to circumvent the limitations that the country’s furniture industry had faced in the areas of marketing and production. Some of the manufacturers connected to Westnofa were P.I. Langlo Møbelfabrikk, Ekornes, Stokke and Vestlandske.

Westnofa took great pains to devise the most cost-effective and efficient method of packing and shipping worldwide. Flat-pack assembly for lightweight shipping was the result. In neighboring Sweden during the late 1940s, DUX president and furniture designer Folke Ohlsson put the same idea into practice. Flat-pack assembly saved space in warehouses and money on transportation. It’s a breakthrough that survives today — namely at popular Swedish brand IKEA.

While it’s unclear if Westnofa also produced furniture in addition to exporting the goods of a group of manufacturers, some of the more well-known designers that are today mentioned alongside the company include Ingmar Relling, Torstein Nilsen and Jens Nielsen. Relling is best known for seating and his most famous piece associated with Westnofa is his high-backed Siesta chair, which features supple leather cushions atop a bentwood frame. Torstein Nilsen designed an elegant glass-topped bentwood dining table that is also commonly linked with Westnofa. Jens Nielsen created minimalist, sculptural lounge chairs in birch and plywood that are connected with the Westnofa name.

$1,504
Harald Relling for Westnofa Wing Wingback Brown Leather Lounge Chair
By Ingmar Relling, Westnofa Furniture
Located in Munich, Bavaria
This 'Wing Wingback lounge chair and ottomane were designed by Harald Relling and were produced by Westnofa in Norway. They are made from brown aniline leather on chromed tubular st...
Category