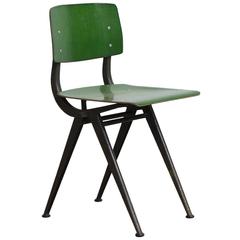 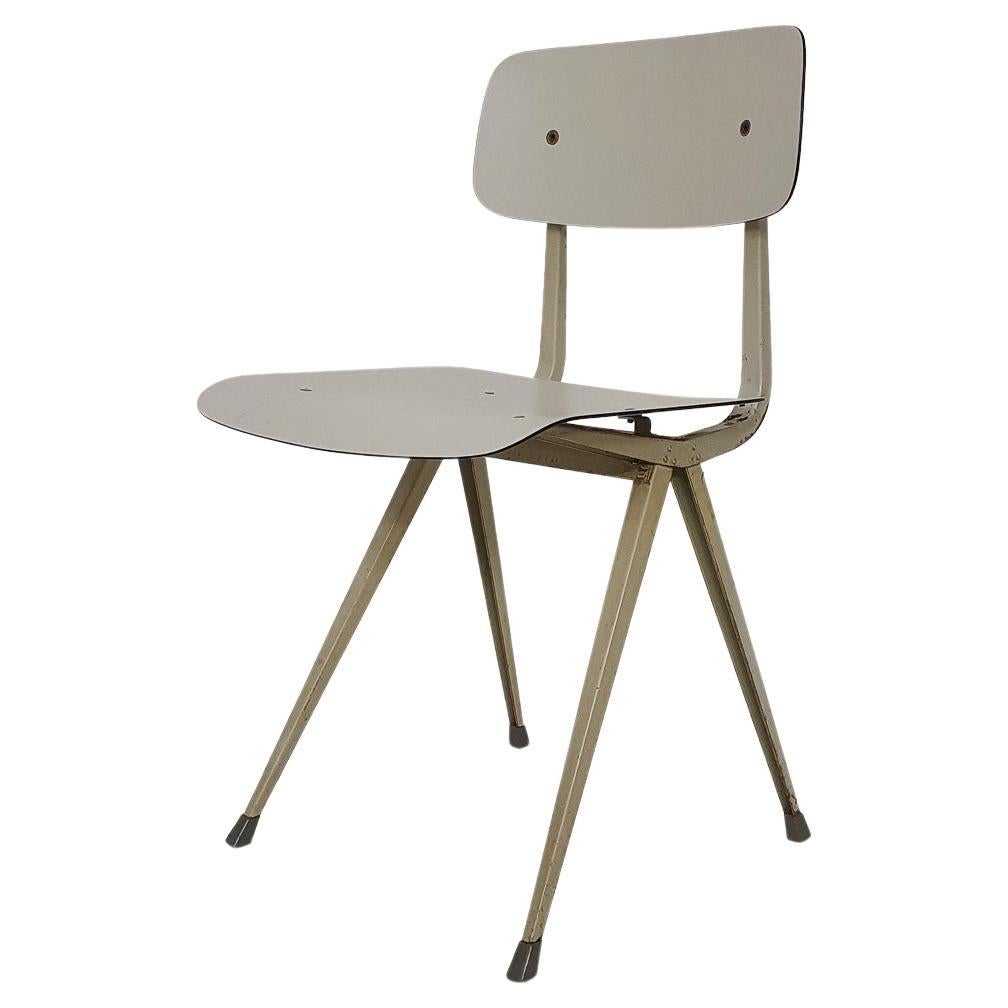 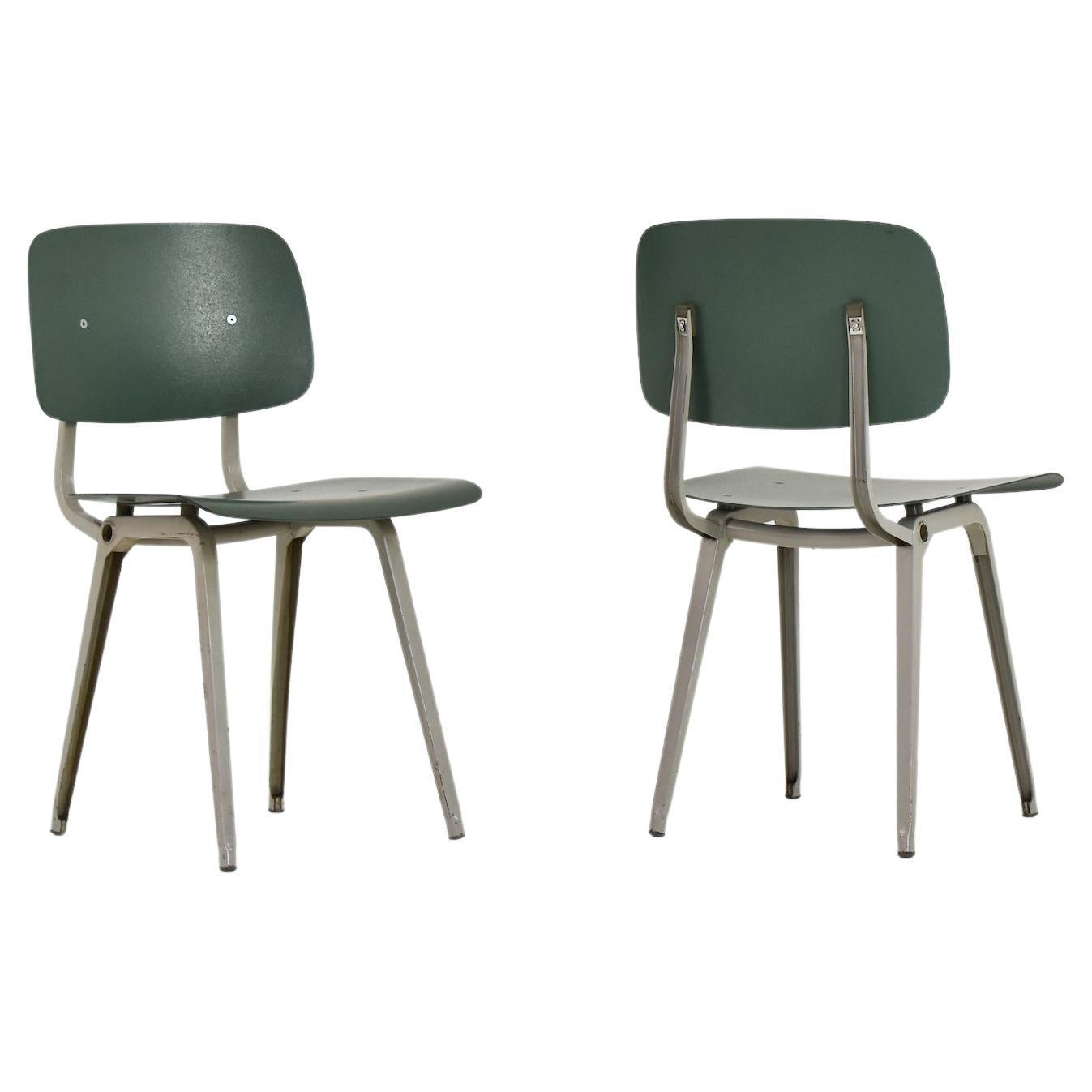 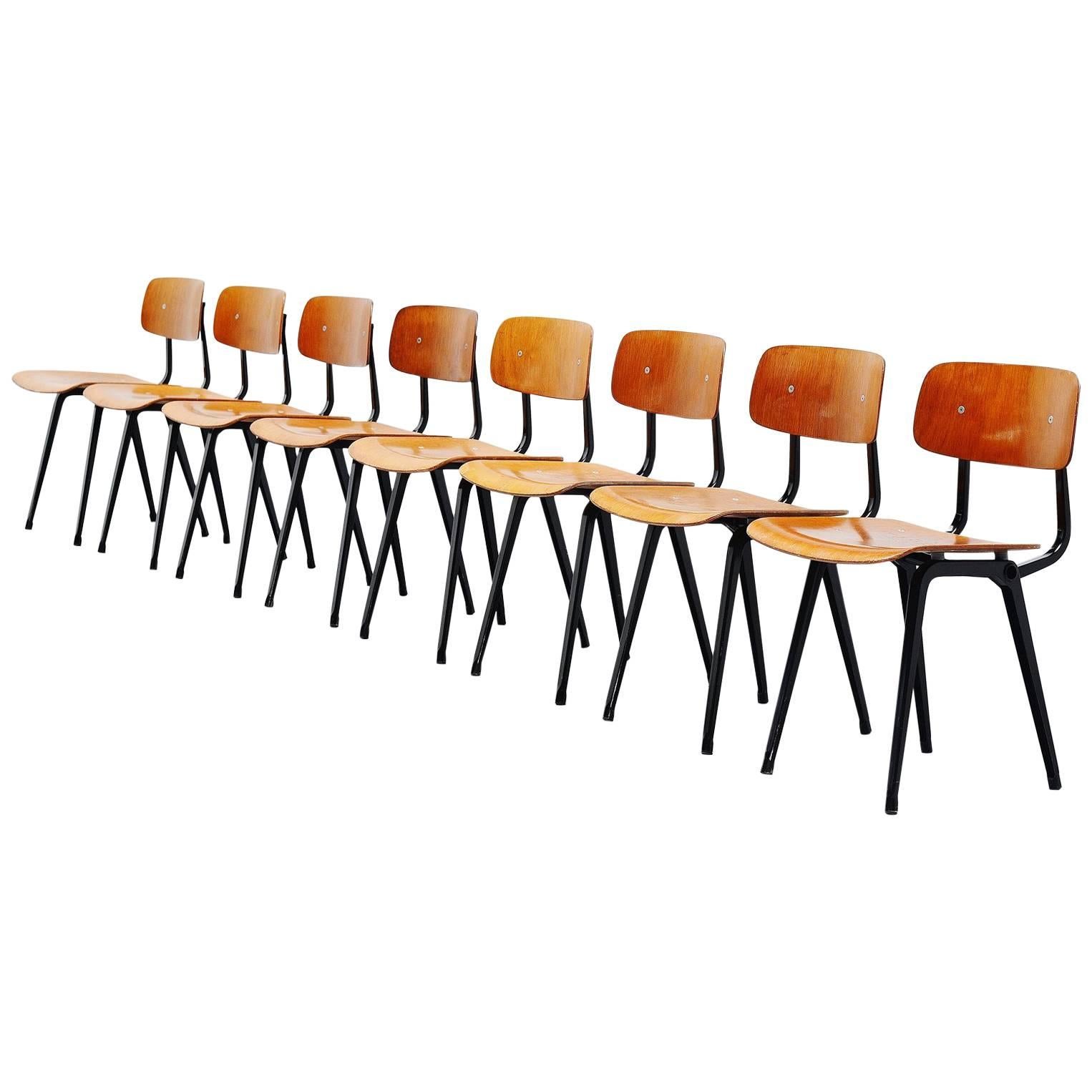 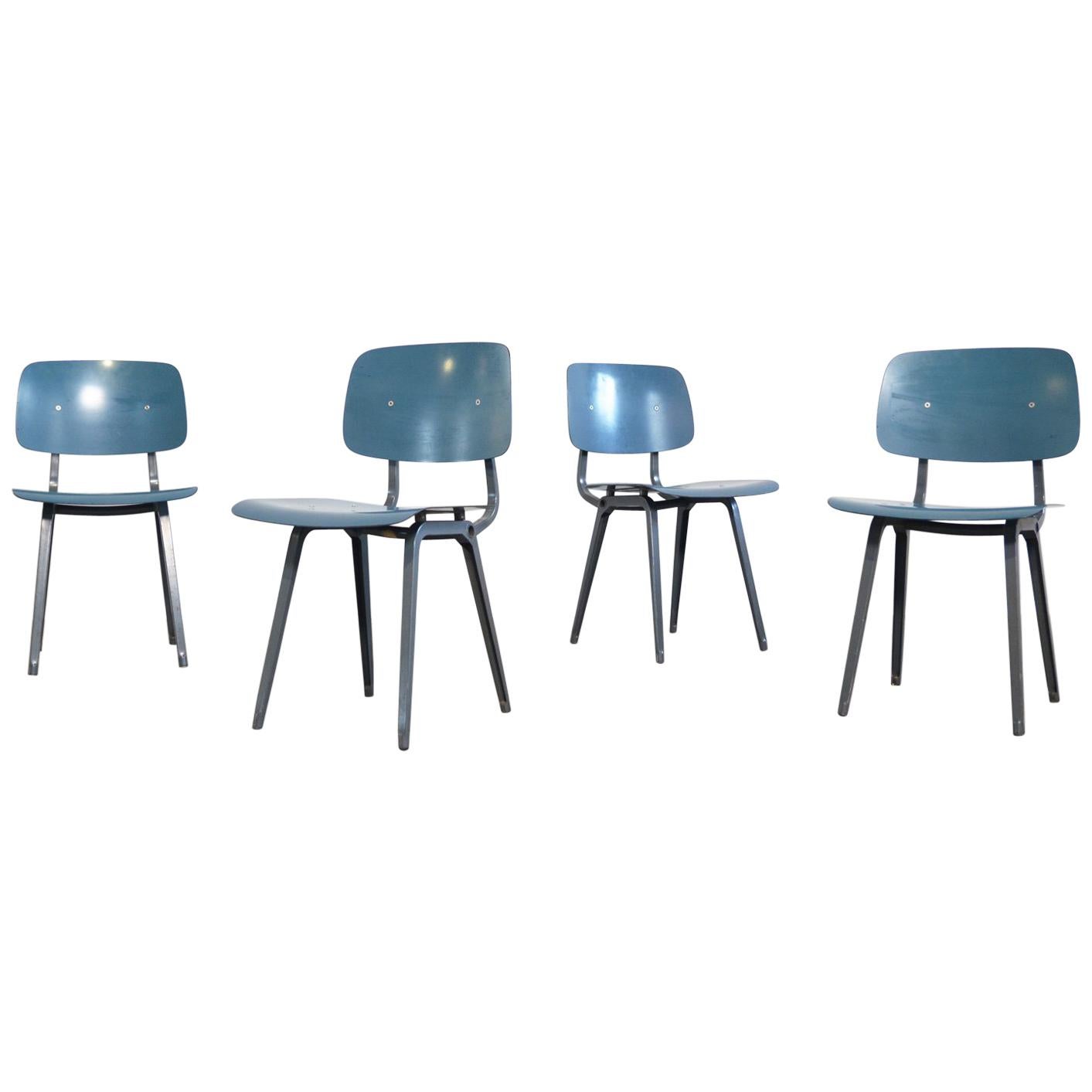 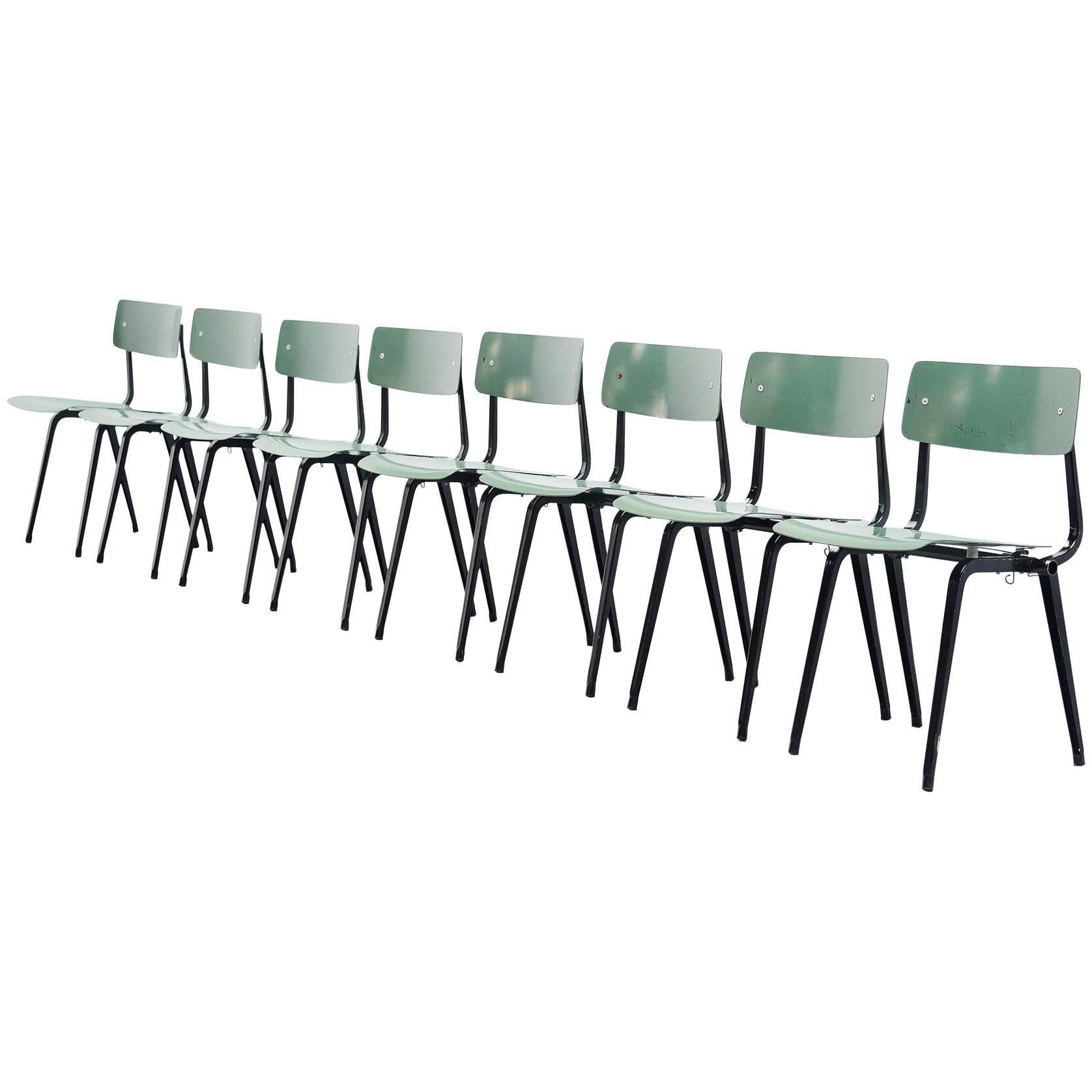 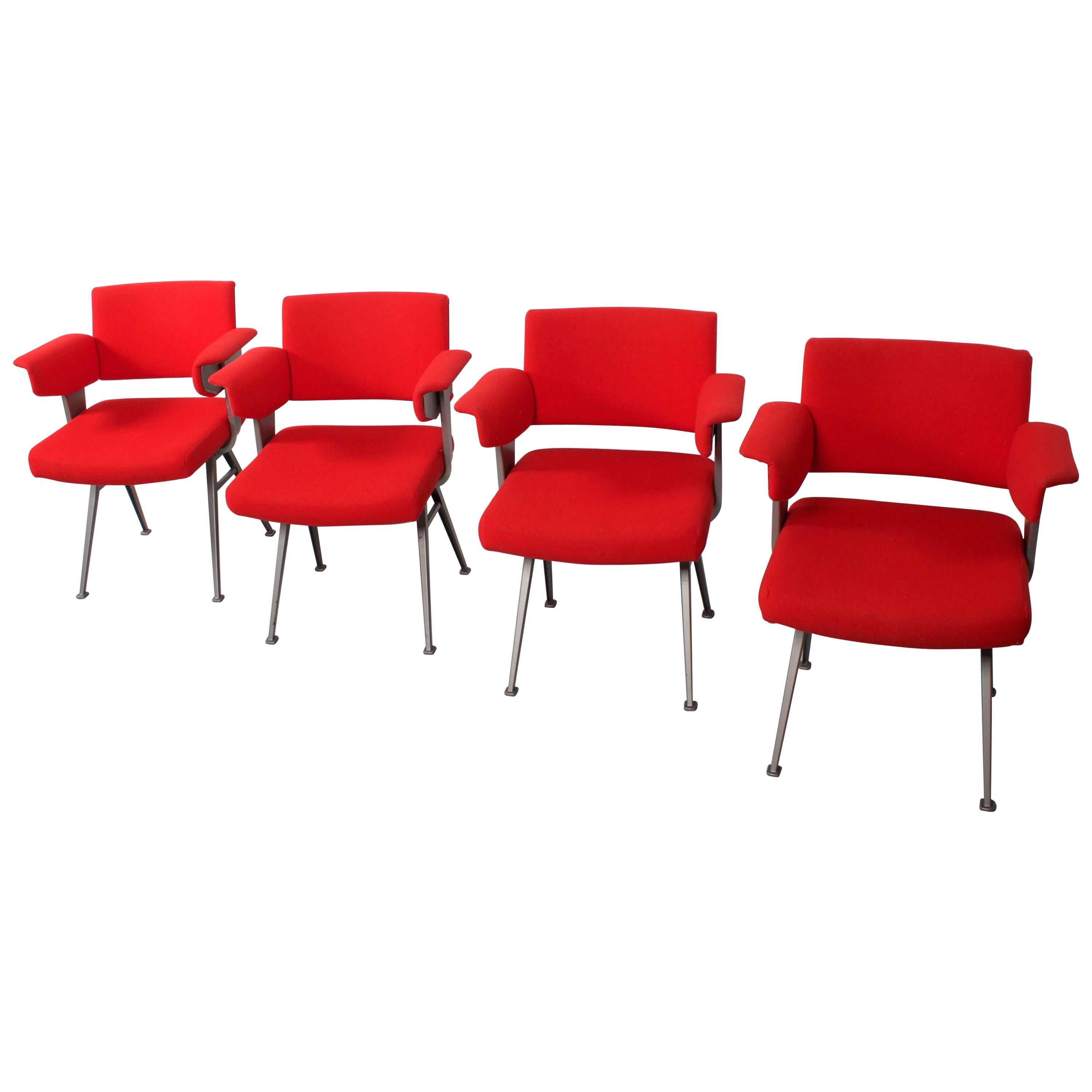 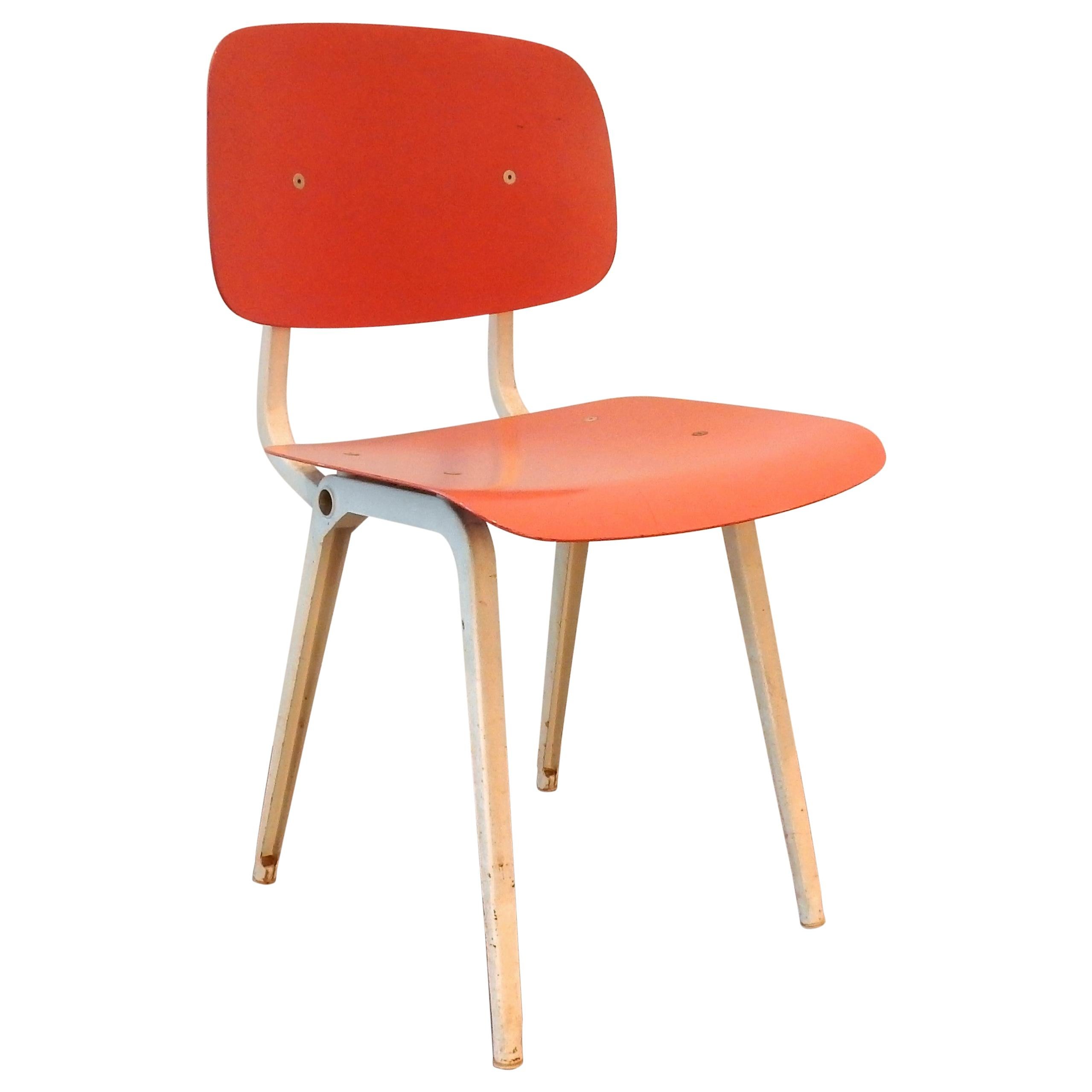 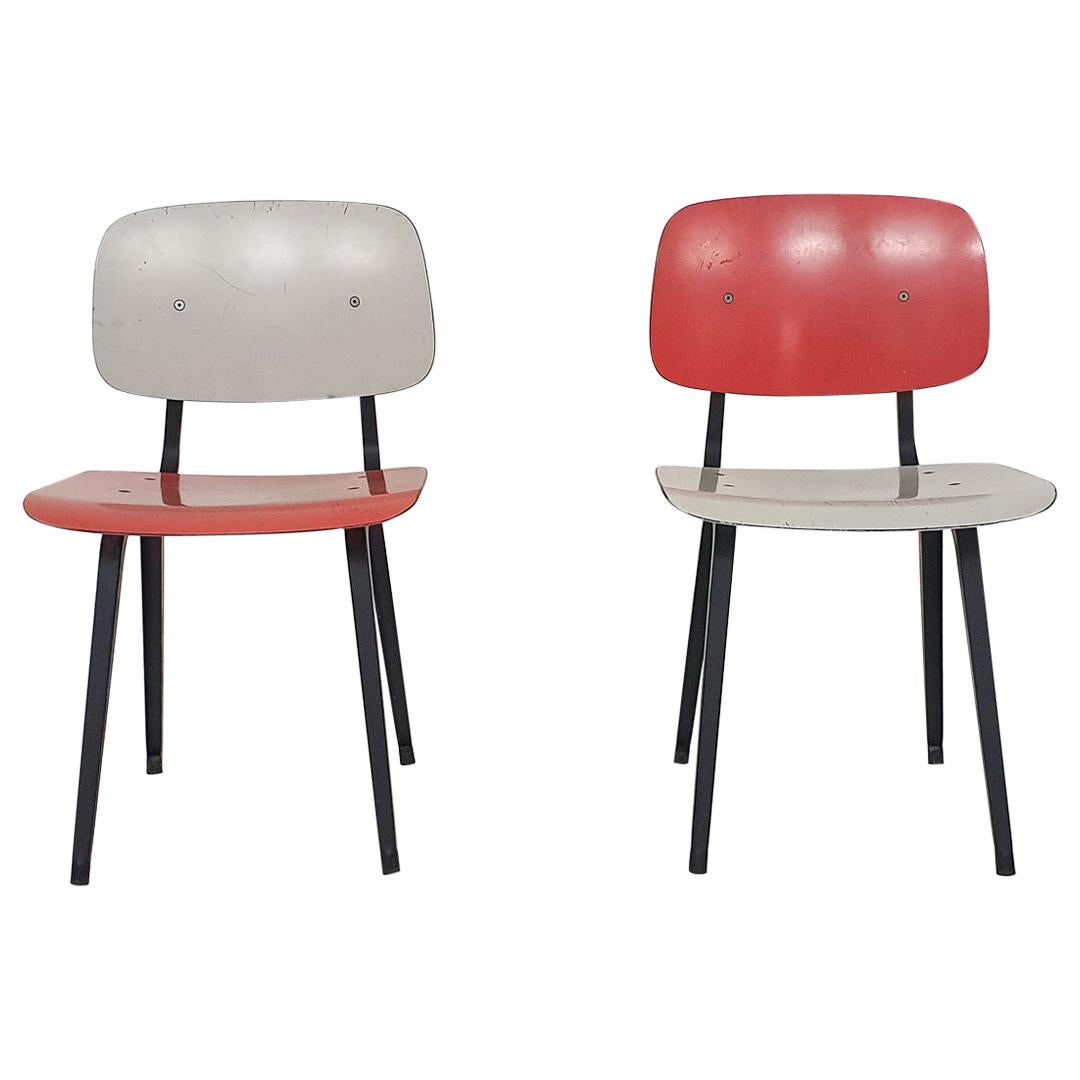 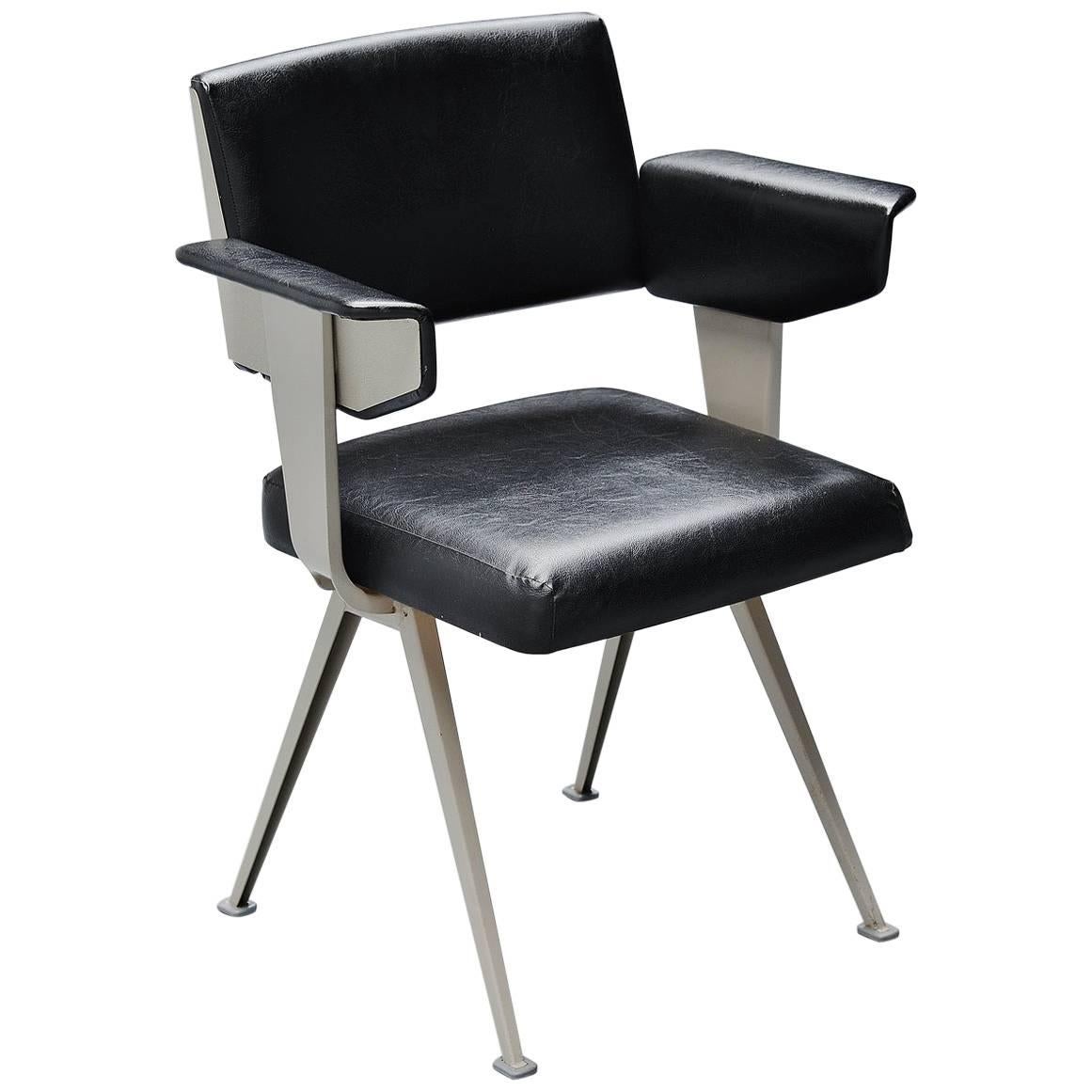 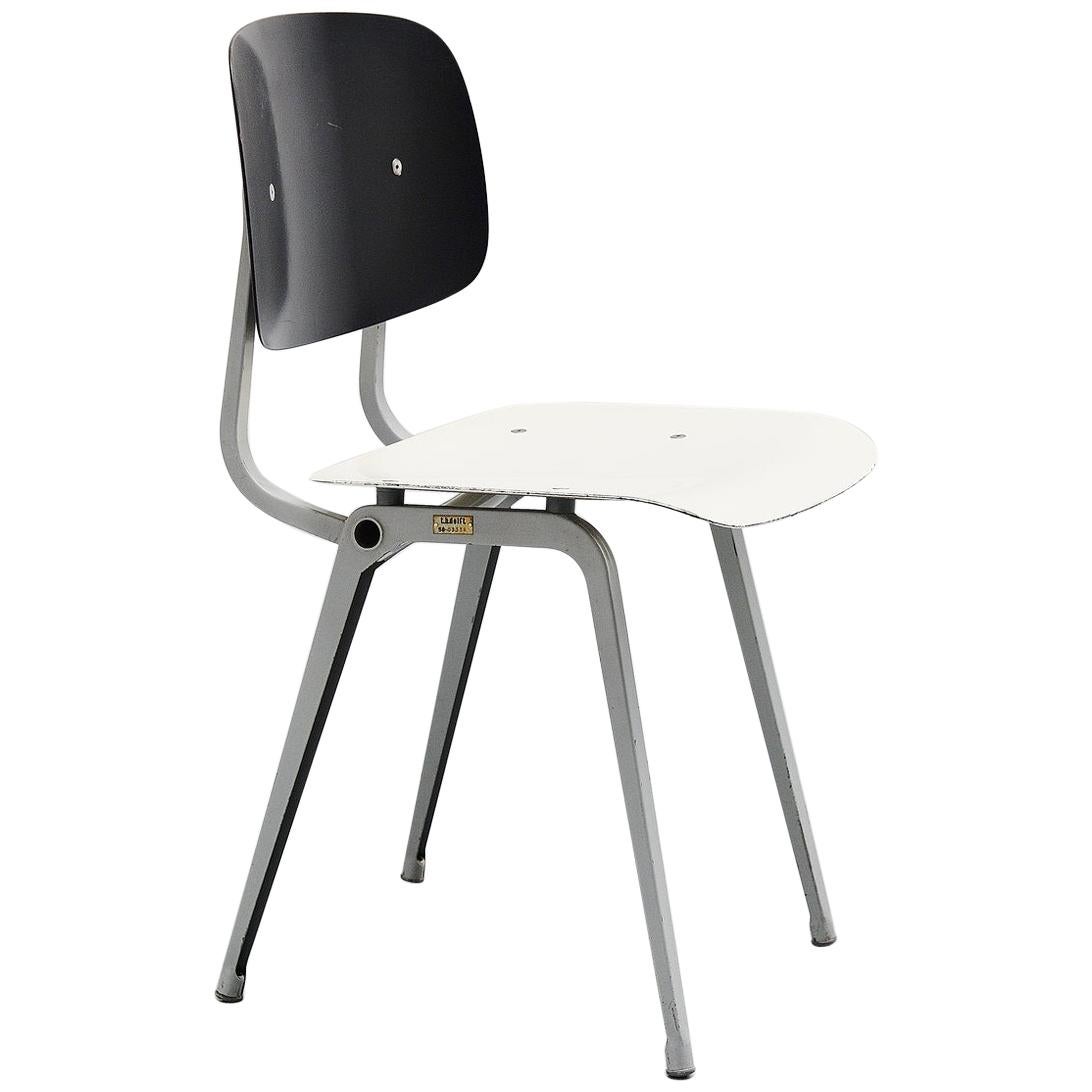 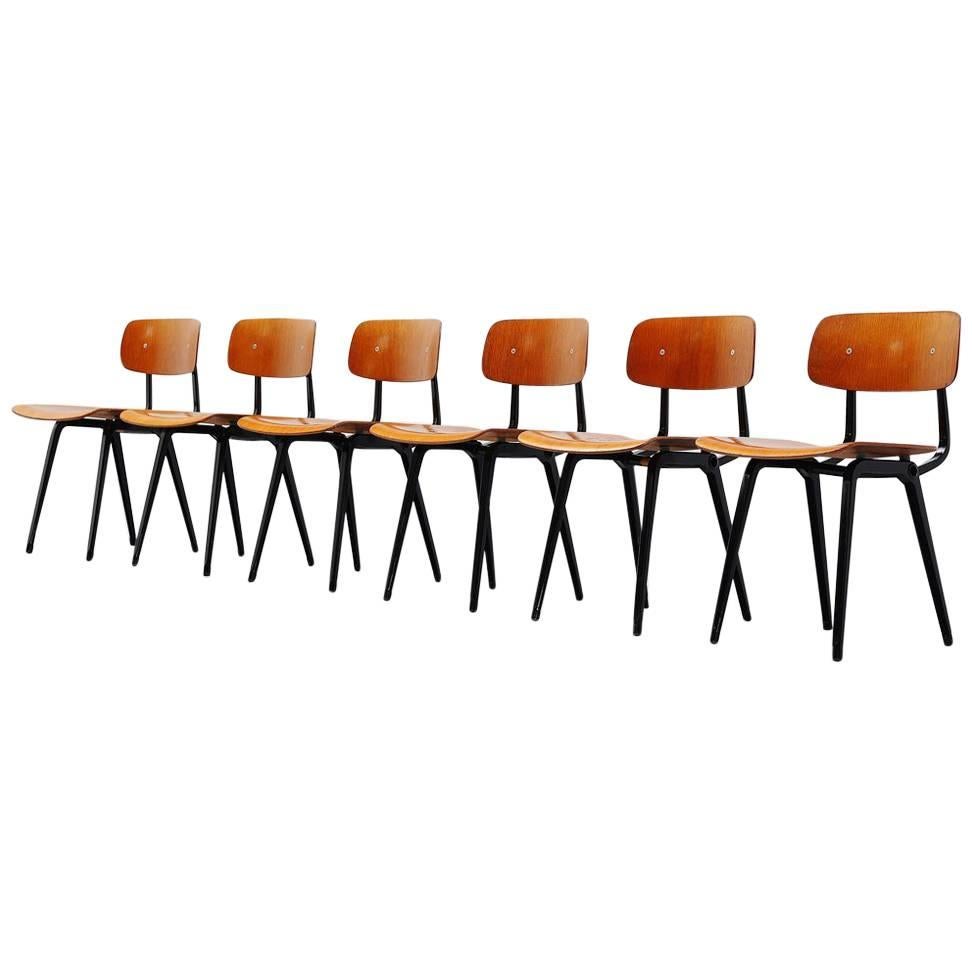 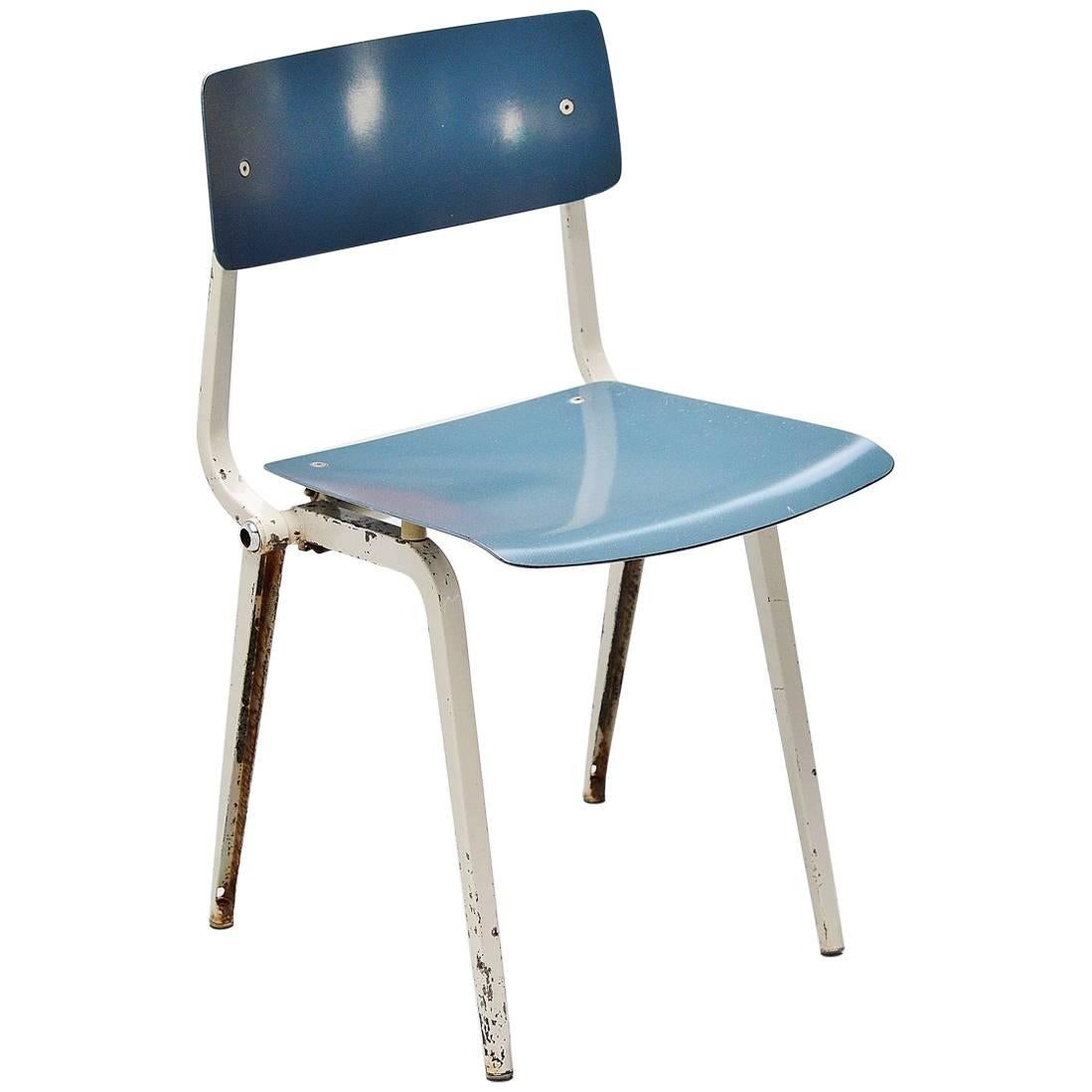 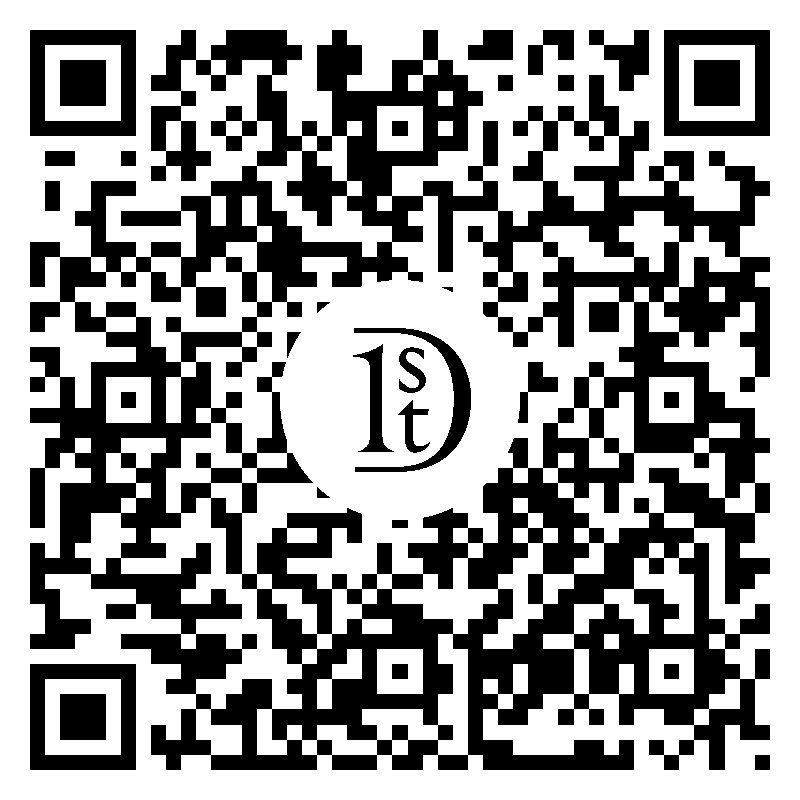 This very very rare chair is in green, original, by de Cirkel, made for teenagers. The result chair was the next step after the revolt chair, by Kramer and Wim Rietveld, the grandson of Gerrit Rietveld. Weight 8.5 kg. Free shipping for Amsterdam, Haarlem and IJmuiden for lamps, chairs, small items as tables and office desks, small not too heavy couches. Rest of Holland €133, for European destinations starting at € 95, depending on the item and country of your selection. Further on discounted shipping to all intercontinental destinations starting at €125, depending on the item and country or state of your selection. We offer a variety of restoration and shipping services, high service white glove shipping, parcel shipping and store-to-door shipping, suitable for all your preferences. Our specialized shipping department can inform you about all the details, ask us for the customized possibilities and very competitive pricing. 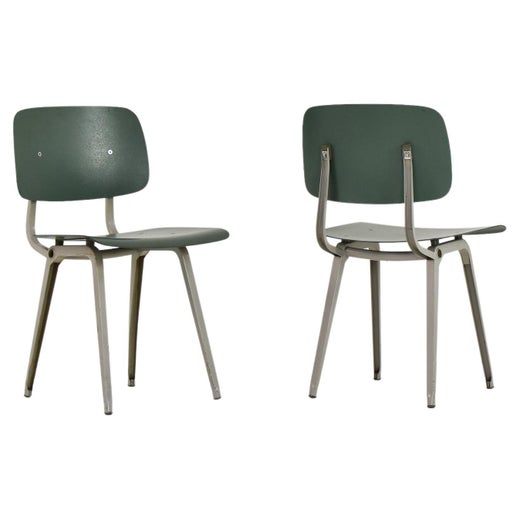 Through both his bold furniture designs and his teaching and administrative positions within the architecture and design industries, the solution-oriented Friso Kramer helped elevate industrial design to a venerated place in the modernist canon.

While the mid-century years saw no shortage of function-minded modernists, Kramer may have been the most extreme of them. “If form does not contribute to the function, it has no right to exist,” the Dutch designer once said. Born in Amsterdam in 1922 to the pioneering architect Piet Kramer, Friso studied architecture, industrial design, electrical engineering and interior design. He cut his teeth in the studios of architect Jan Piet Kloos and interior designer Frans Paulussen, then, in 1948, went to work as a designer at the steel furniture manufacturer De Cirkel (part of the Ahrend group), where he would design some of his best-known work.

The 1953 Revolt chair, which is among his most celebrated seating and a darling of Dutch mid-century modernism, embodied Kramer’s function-first design; its skeletal, industrial form provides for maximum comfort and ergonomic support with minimal material. He joined forces with Wim Rietveld, son of celebrated Dutch modernist Gerrit Rietveld, for the 1958 Result chair, which married elements of the Revolt with forms from Rietveld’s Pyramid series. Kramer found numerous ways to riff on and perfect his brand of minimalism: The 1960 Resort and Repose armchairs demonstrate how he slightly tweaked the skeletal frames for different postures and uses.

In 1963, Kramer left Ahrend to found Total Design Studio with Wim Crouwel, Benno Wissing and Paul and Dick Schwartz. The firm grouped graphic, industrial and spatial design under one roof with the shared belief in functionalism. Though Total Design Studio is still in business today, Kramer left the company to return to Ahrend in 1971, serving as art director until 1983. Following Kramer’s death in 2019, Ahrend teamed up with Danish design brand HAY to relaunch the Result and Revolt chairs.

About the Seller
4.7
Located in IJMuiden, Netherlands
Vetted Seller
These experienced sellers undergo a comprehensive evaluation by our team of in-house experts.
1stDibs seller since 2016
117 sales on 1stDibs
Typical response time: 3 hours

Friso Kramer for Ahrend de Cirkel "Result" Dining Chair, the Netherlands
By Friso Kramer, Ahrend de Cirkel
Located in Amsterdam, NL
White metal frame and white Ciranol seating and back. Frame has some rust. Kramer is the son of architect Piet Kramer. In 1963 he founded, together with Wim Crouwel, Benno Wissin...
Category