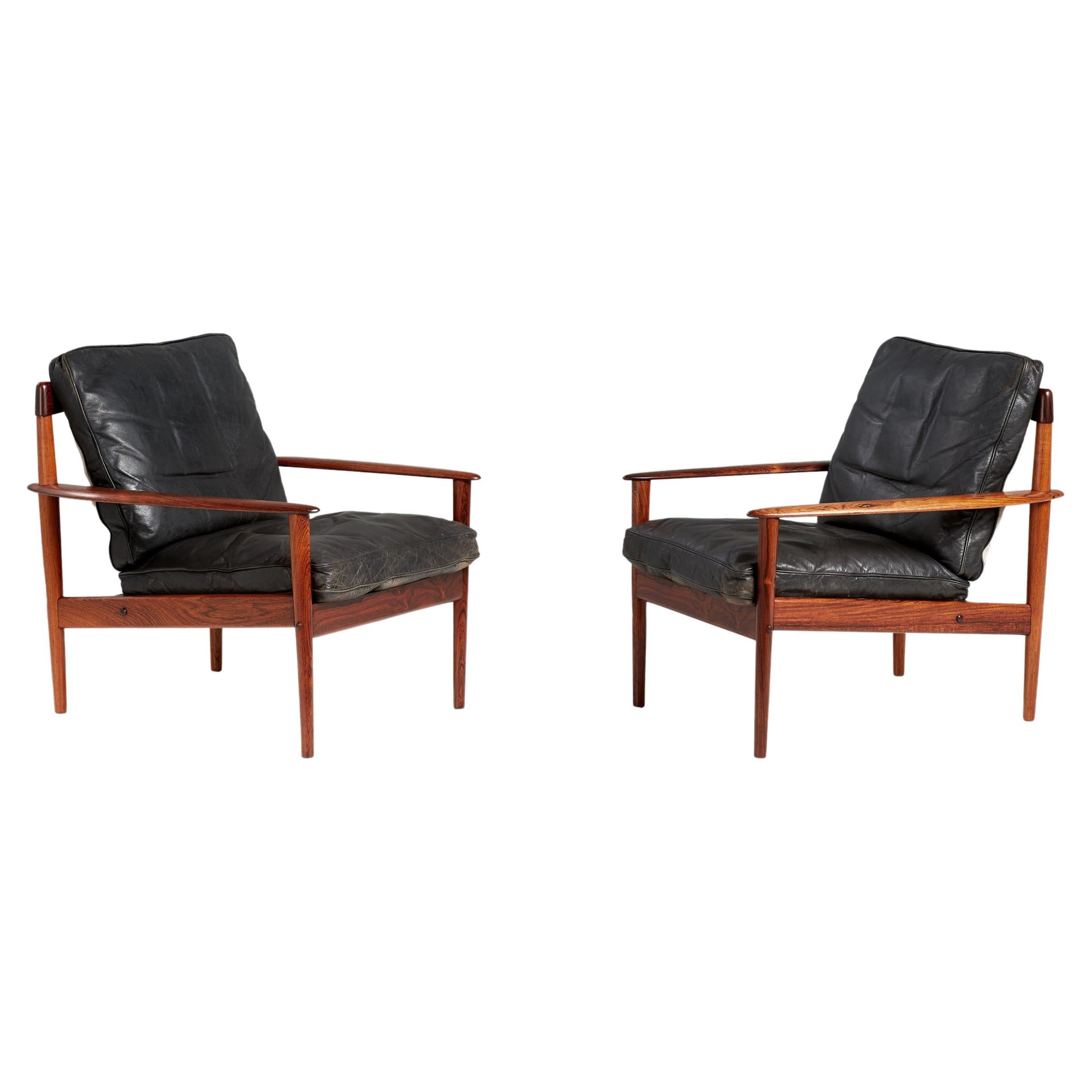 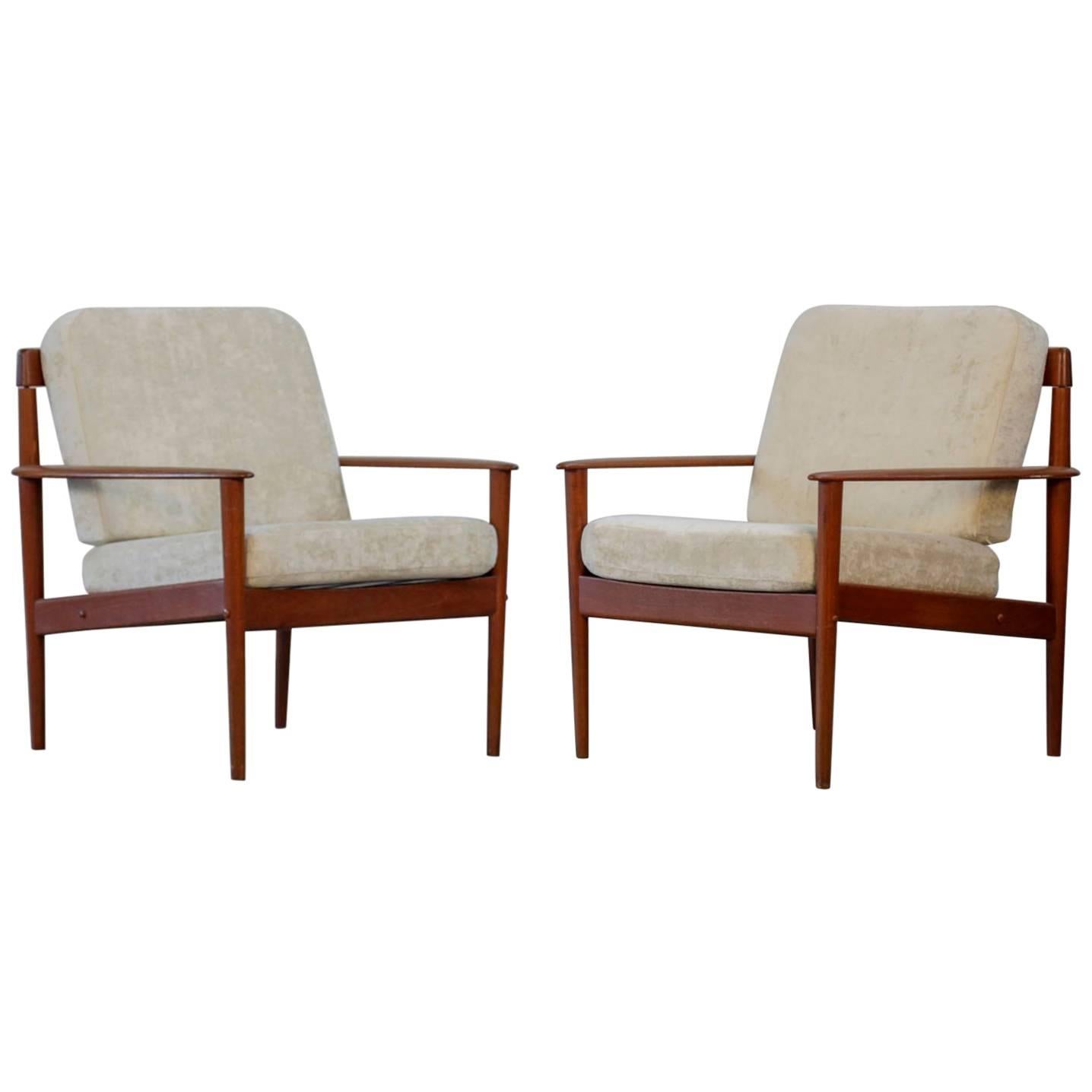 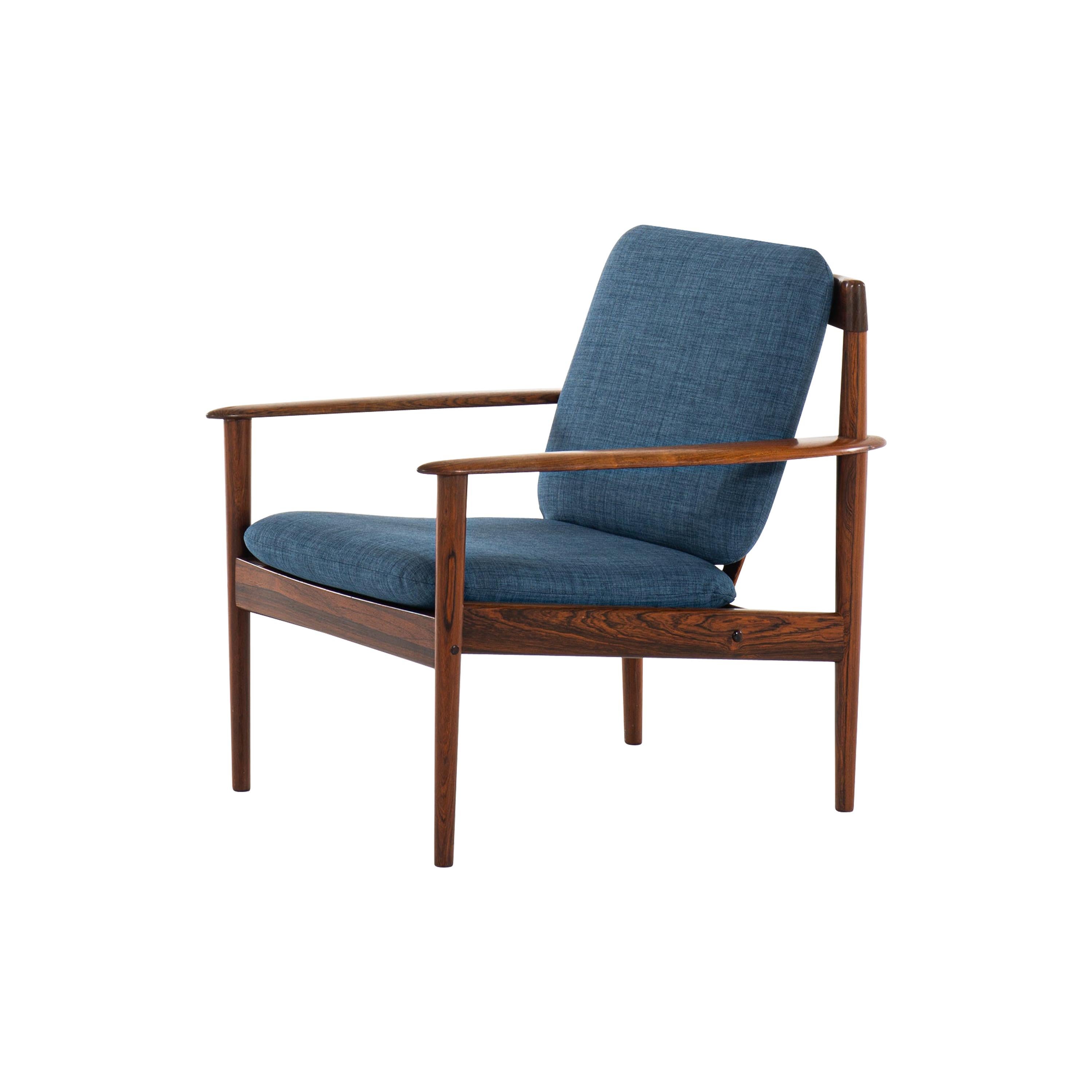 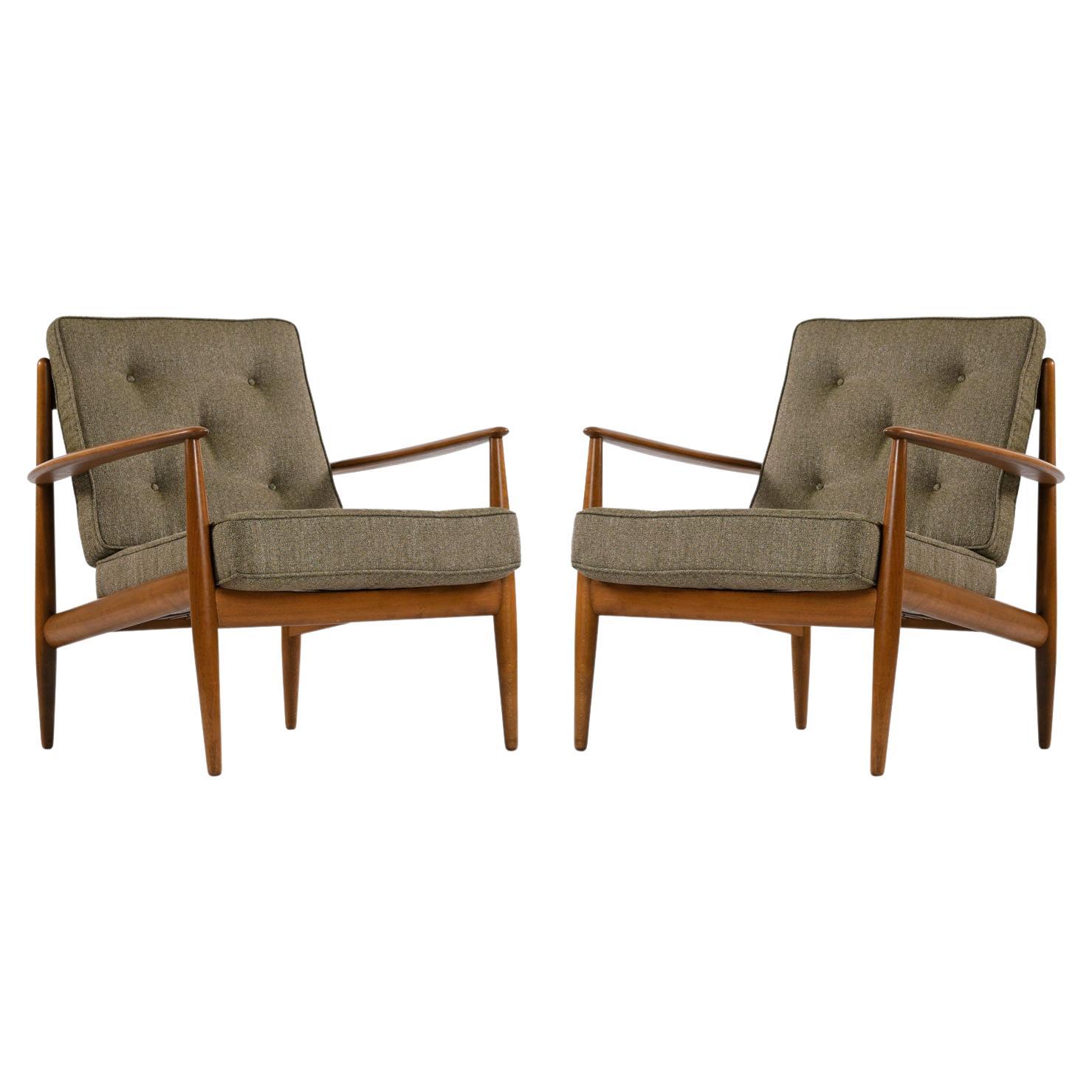 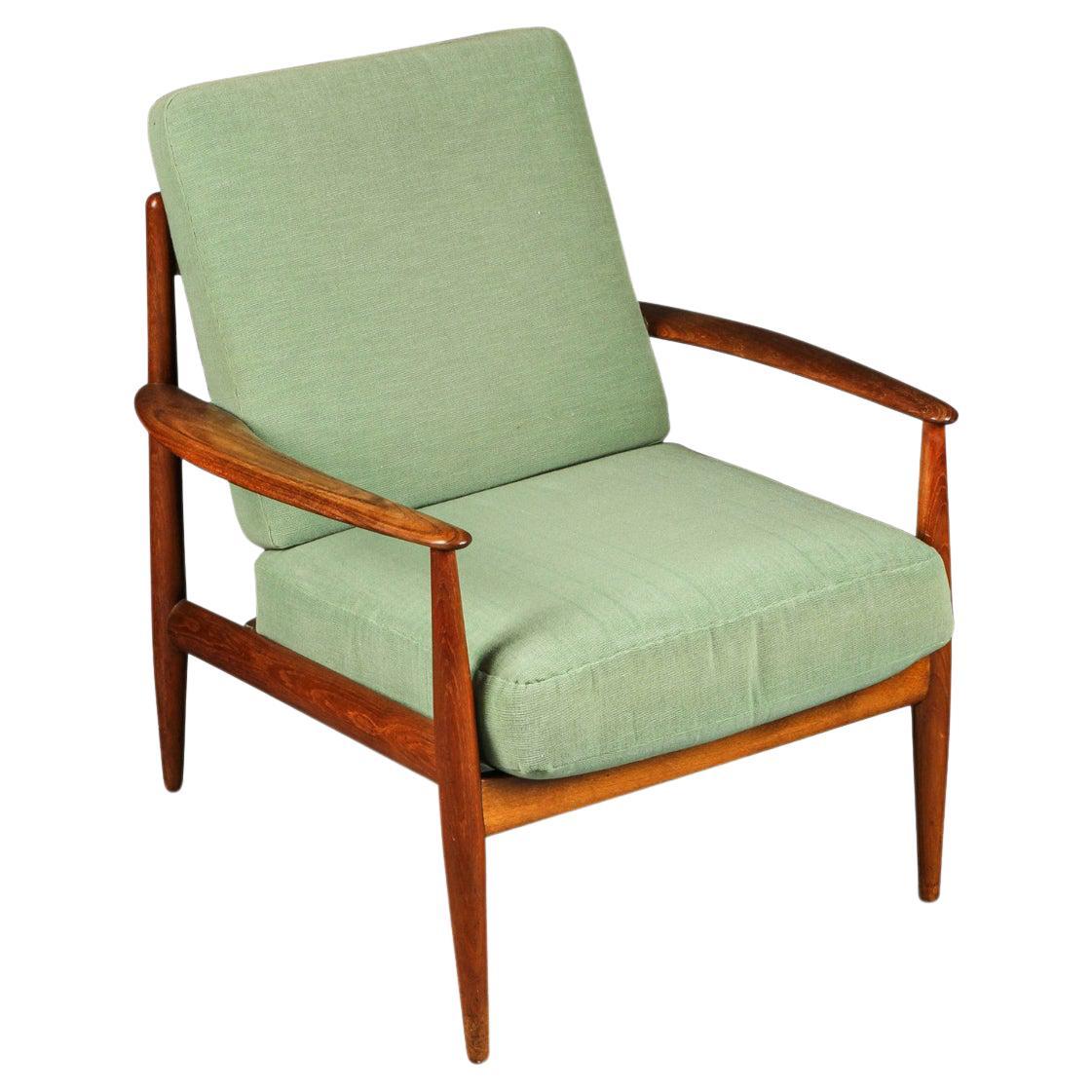 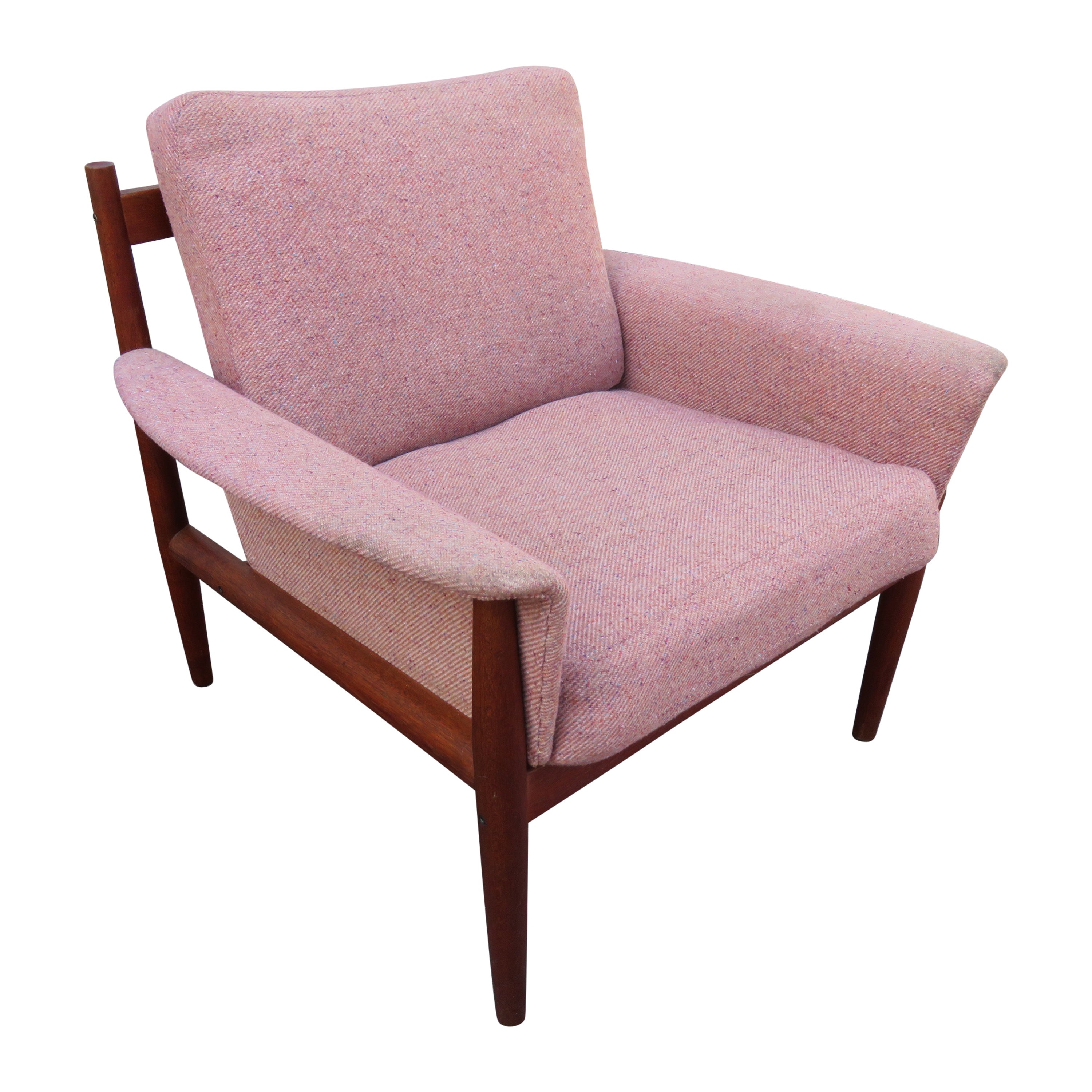 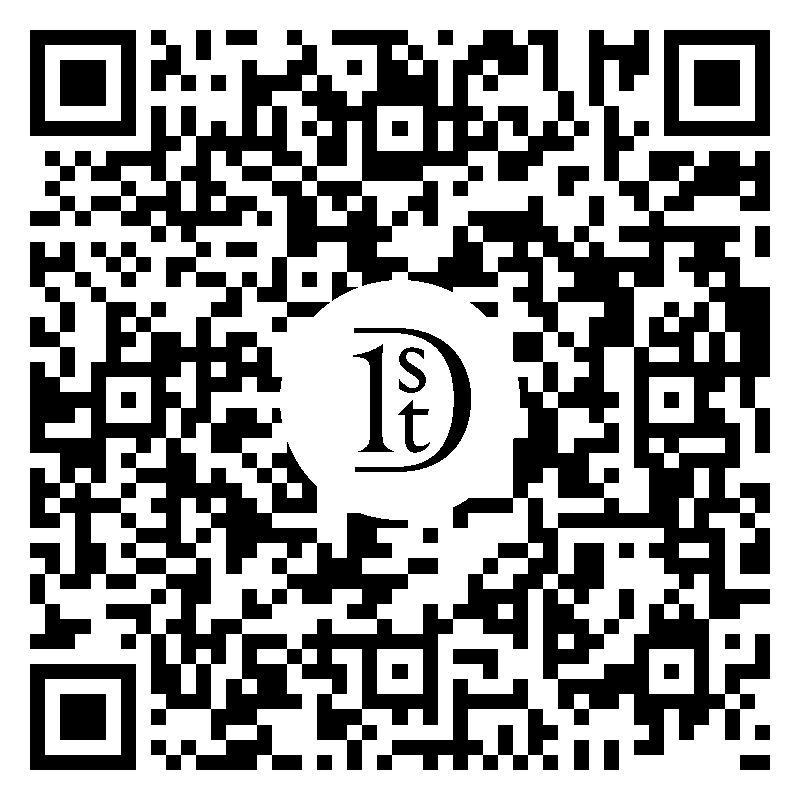 A stunning, rare pair of Mid-Century Modern Grete Jalk lounge chairs, Mod. PJ (Poul Jeppesen) (Model 56) 1960's rosewood, lounge arm chairs designed by Grete Jalk for Poul Jeppesen made in Denmark. An exceptional pair, both for their form and quality. The pair embodies the whimsical fervor of the period, from the 1960's. Featuring a rosewood frame, with dramatic fabulous grain. The armrests, formed with perfection as they flow seamlessly to meet the tapered, round legs. The back cushion rests against a four slat backrest, the seat cushion rests on the outstanding original super spring base beneath the chairs. The underside of chairs retain the original manufacturer’s label (Made in Denmark PJ Design Grete Jalk). The original back and seat cushions make these chairs just as comfortable as they are beautiful, with amazing form. The side profile is an absolute visual charm. This is an early Grete Jalk for Poul Jeppesen production. Fantastic design, very well-crafted, this unique pair will present a powerful design statement with an authentic 1960's MCM Scandinavian look, and blend with many décor styles! Condition Report: Clean unrestored original condition. Frames sturdy and stable, amazing authentic condition throughout with only minor wear/scuffs. The original loop superspring is tight and supportive. Original black Naugahyde upholstery is in good condition, with minimal fading and minor wear. Comfortable and very sturdy. Measurements: 29.14" tall x 30.71? deep x 28.3? wide x arm height 21" (seat 16.7) Jalk was born in Copenhagen in 1920. She trained in cabinetmaking at Copenhagen's Design School for Women between 1940 and 1942. Recognized as an important Danish modernist designer, working at a time when women were a rarity in the design world. She completed her studies at the Danish Design School in 1946, while receiving additional instruction from Kaare Klint at the Royal Academy's Furniture School. In 1946, she won first prize at the annual Cabinetmaker's Guild Competition; five years later, she received wide acclaim for her designs exhibited at the 1951 Milan Triennale. She took part in the annual competitions of the Design Museum and the Design School's furniture department where she also taught from 1950 to 1960. Around 1953, Jalk opened her own studio and began to develop furniture designs for some of the best known Danish manufacturers, like Poul Jeppesen, Fritz Hansen, Glostrup, and France & Søn. Inspired by the Eameses' and Aaltos' organic, molded furniture, Jalk continuously experimented with new materials and production techniques. Beyond her design work, Jalk edited the design magazine Mobilia (1956-62 and 1968-74), as well as the encyclopaedic, four-volume book, Forty Years of Danish Furniture Design (1987). In 1974, the Ministry of Foreign Affairs commissioned Grete Jalk to curate a traveling exhibition on Danish design. Her foldable exhibition space was a huge success in 25 regions. She contributed immeasurably to the international reputation of Danish design, and her work can be found in private and public collections around the world. Jalk passed away in 2006. 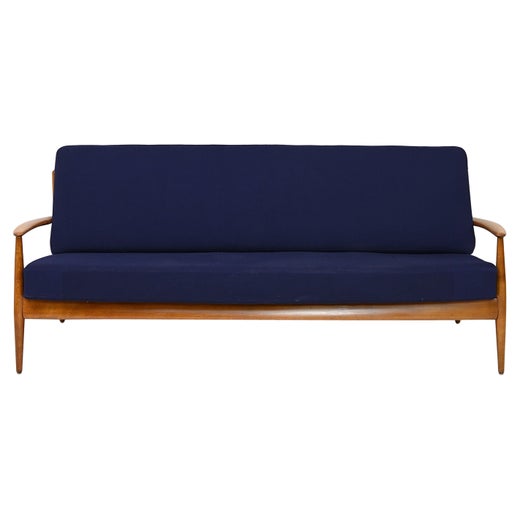 What would the reputation of mid-century Danish furniture be without legendary female designer Grete Jalk? A pioneer of Scandinavian modernism, Jalk sought to craft furniture that was both cost-efficient and high in quality, each piece made for the evolving interiors and design sensibilities of the day. She continues to be celebrated for her sleek and minimal armchairs, lounge chairs, coffee tables and more.

Jalk was born in 1920 in Copenhagen. She studied at the Drawing and Applied Art School for Women before enrolling at the Royal Danish Academy of Fine Arts, where famed designer Kaare Klint was among her instructors. Jalk completed her studies in 1946 and began a cabinetmaker apprenticeship. That same year, she won an award at the Copenhagen Cabinetmakers’ Guild competition. Jalk also participated in the 1951 Milan Triennial exhibition, where her designs earned more acclaim and attention.

In 1954, Jalk opened her own design studio and began working with major Danish furniture manufacturers like Fritz Hansen and Glostrup Møbelfabrik. She found inspiration in plywood experiments carried out by Alvar Aalto and Ray and Charles Eames, and she quickly became known for her pared-back, expressive designs, which touted fluid forms and were made of alluring woods such as teak and rosewood.

Jalk’s best-known work is the 1963 GJ chair, a collaboration with cabinetmaker Poul Jeppesen that won first place in the Daily Mail International Furniture Competition. Made of two pieces of molded teak plywood, the sculptural GJ lounge chair is part of the collections of the Museum of Modern Art and Metropolitan Museum of Art.

While creating her iconic furniture designs, Jalk wore many other hats. She taught at the Royal Danish Academy of Fine Arts and served as an editor of the Danish design magazine Mobilia from 1956–62 and 1968–74. In 1974, Jalk curated a traveling design exhibition for the Danish Foreign Ministry and was named a member of the Danish Design Council in 1981. She was also the editor of 40 Years of Danish Furniture Design: The Copenhagen Cabinet-makers' Guild Exhibitions 1927–1966, published in 1987.

Jalk passed away in 2006 at the age of 86. In 2008, Danish furniture manufacturer Lange Production was granted exclusive rights to reproduce the GJ chair, a design as fresh and original today as ever.

1stDibs Buyer Protection Guaranteed
If your item arrives not as described, we’ll work with you and the seller to make it right. Learn More
About the Seller
5.0
Located in Baltimore, MD
Gold Seller
These expertly vetted sellers are highly rated and consistently exceed customer expectations.
Established in 2003
1stDibs seller since 2019
137 sales on 1stDibs
Typical response time: 6 hours
More From This SellerView All
People Also Browsed
You May Also Like