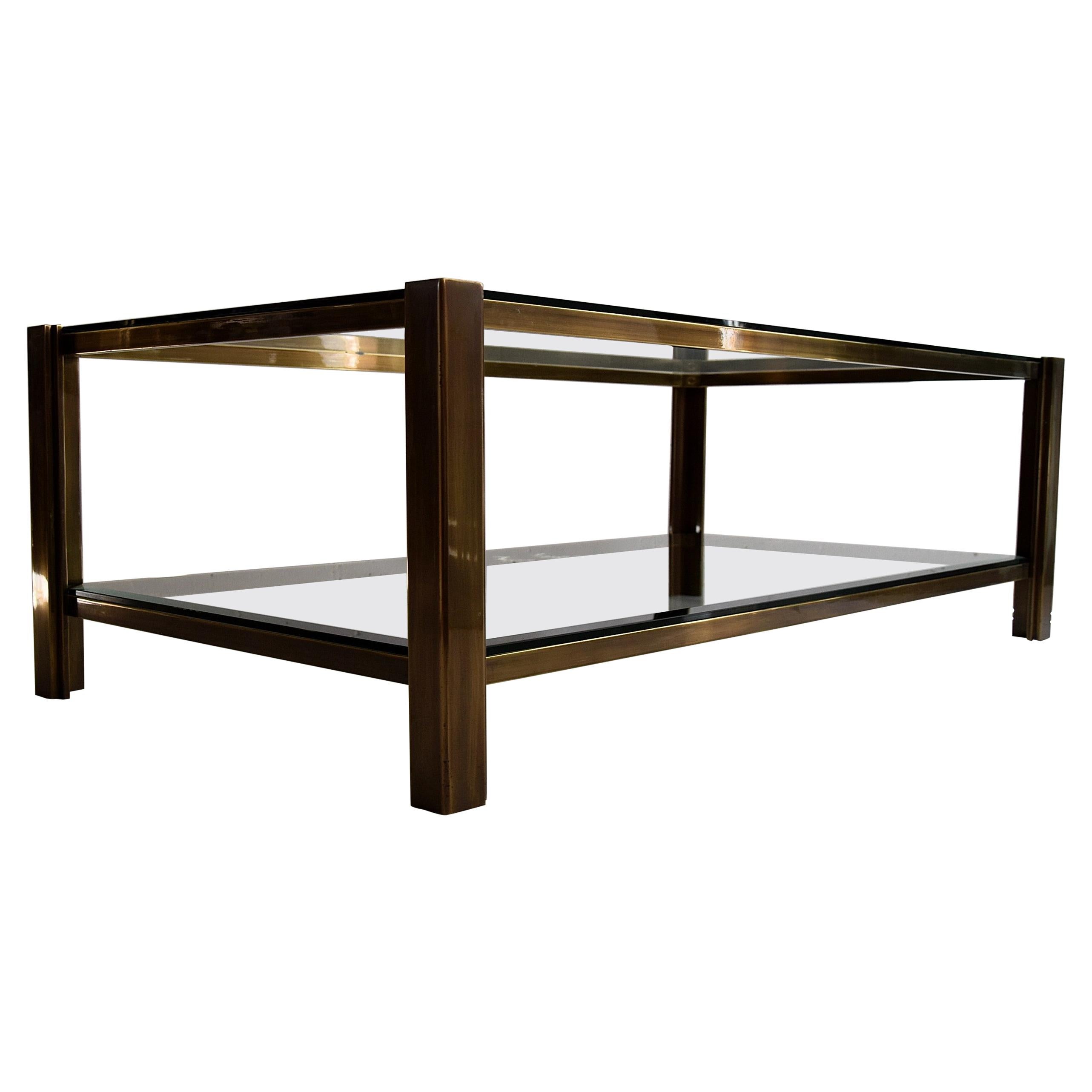 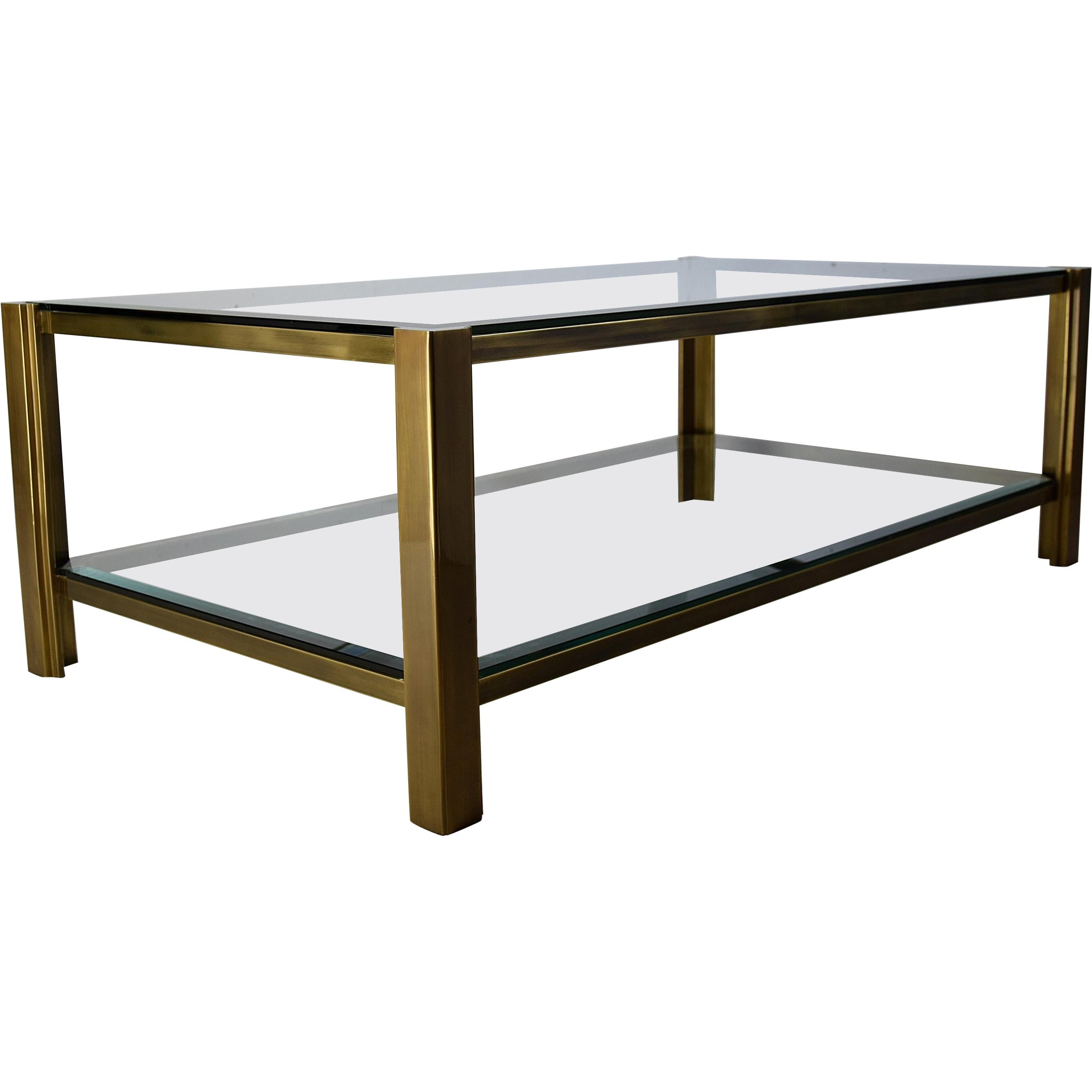 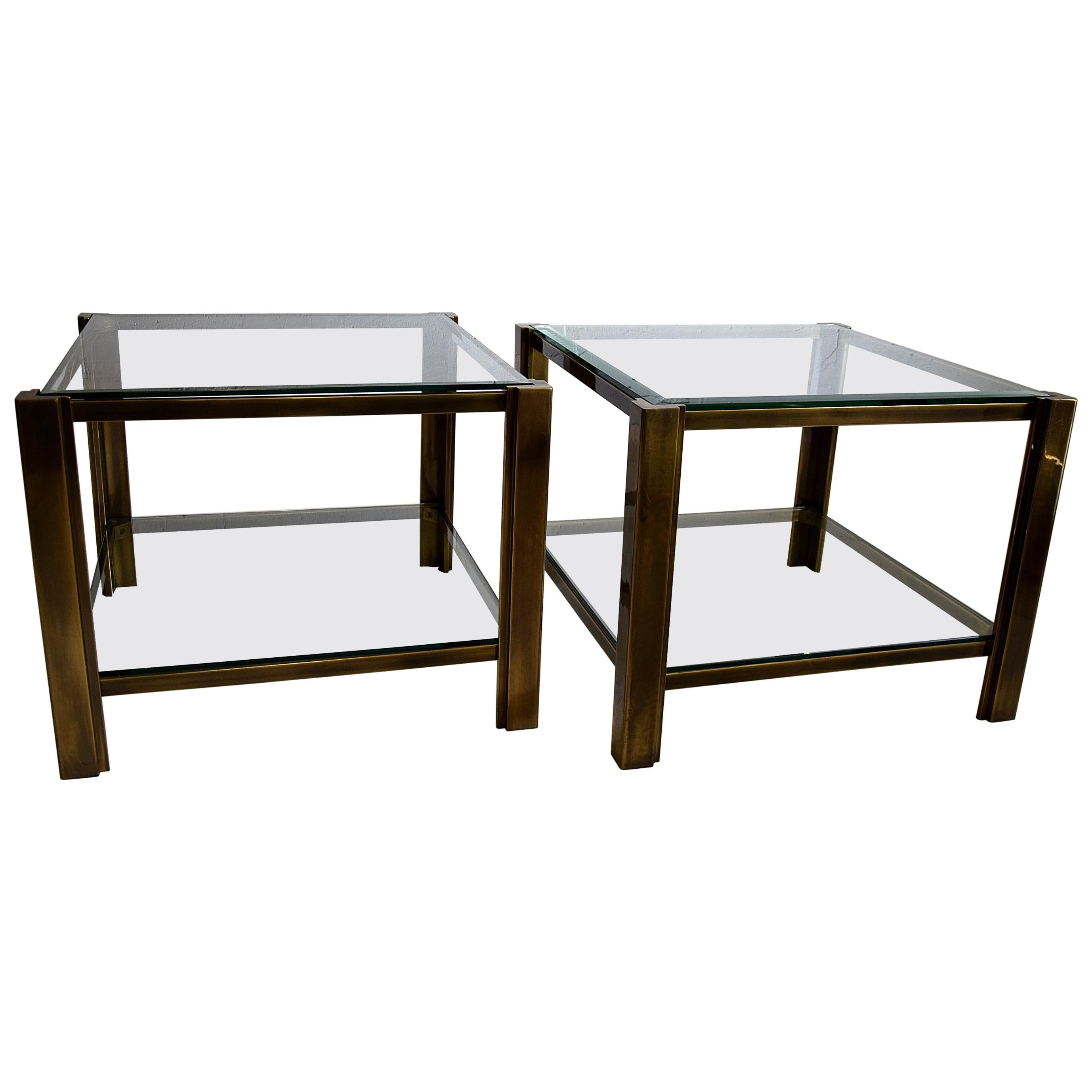 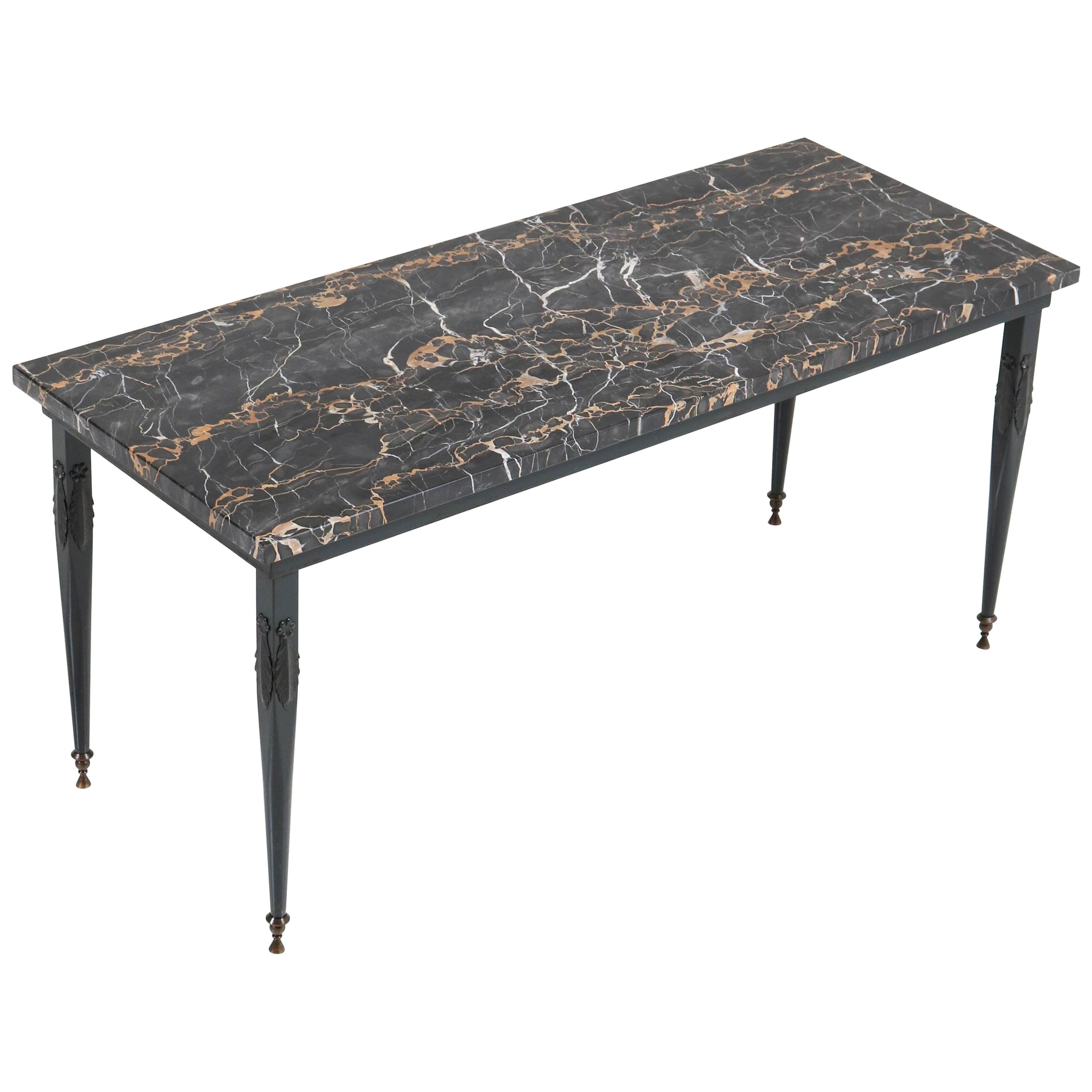 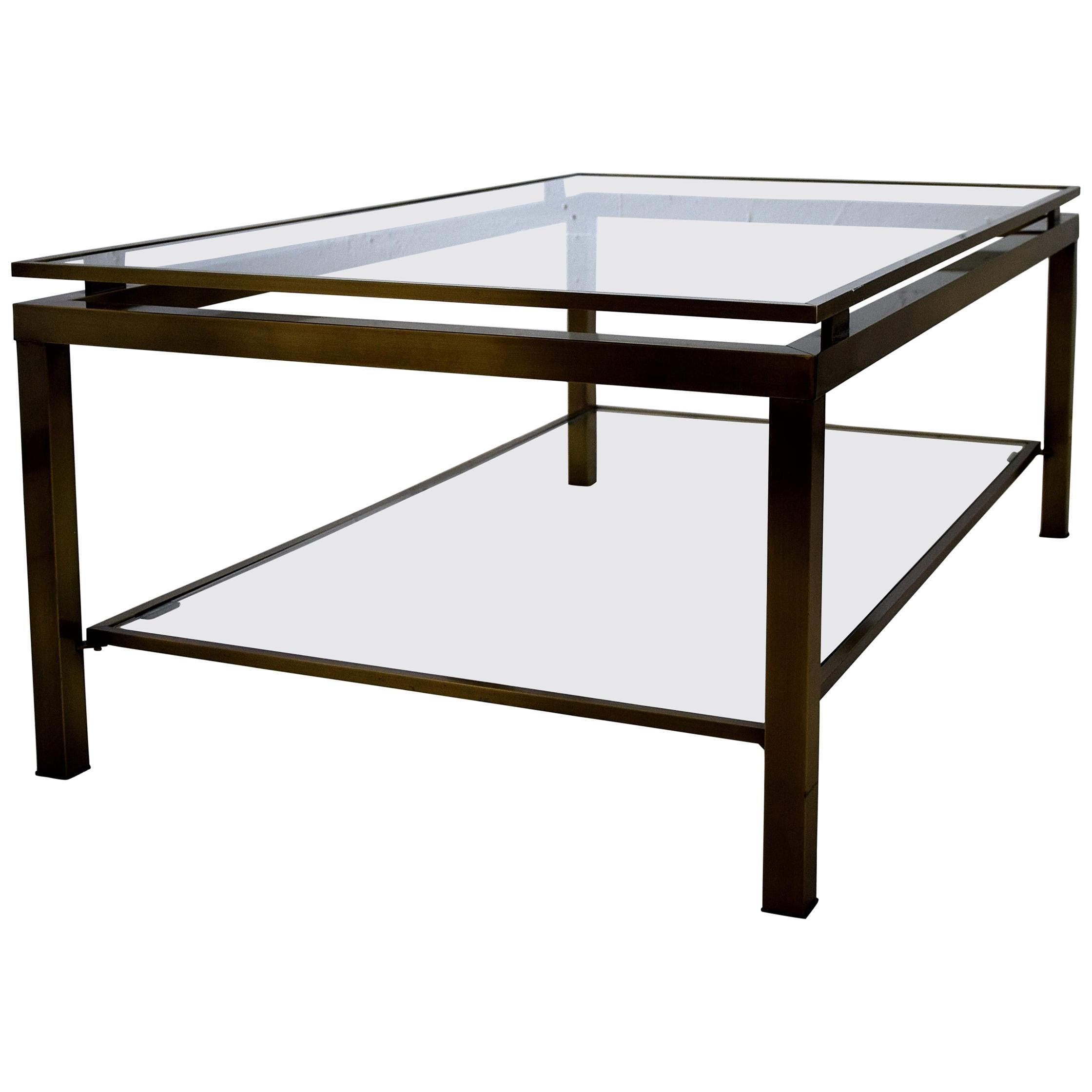 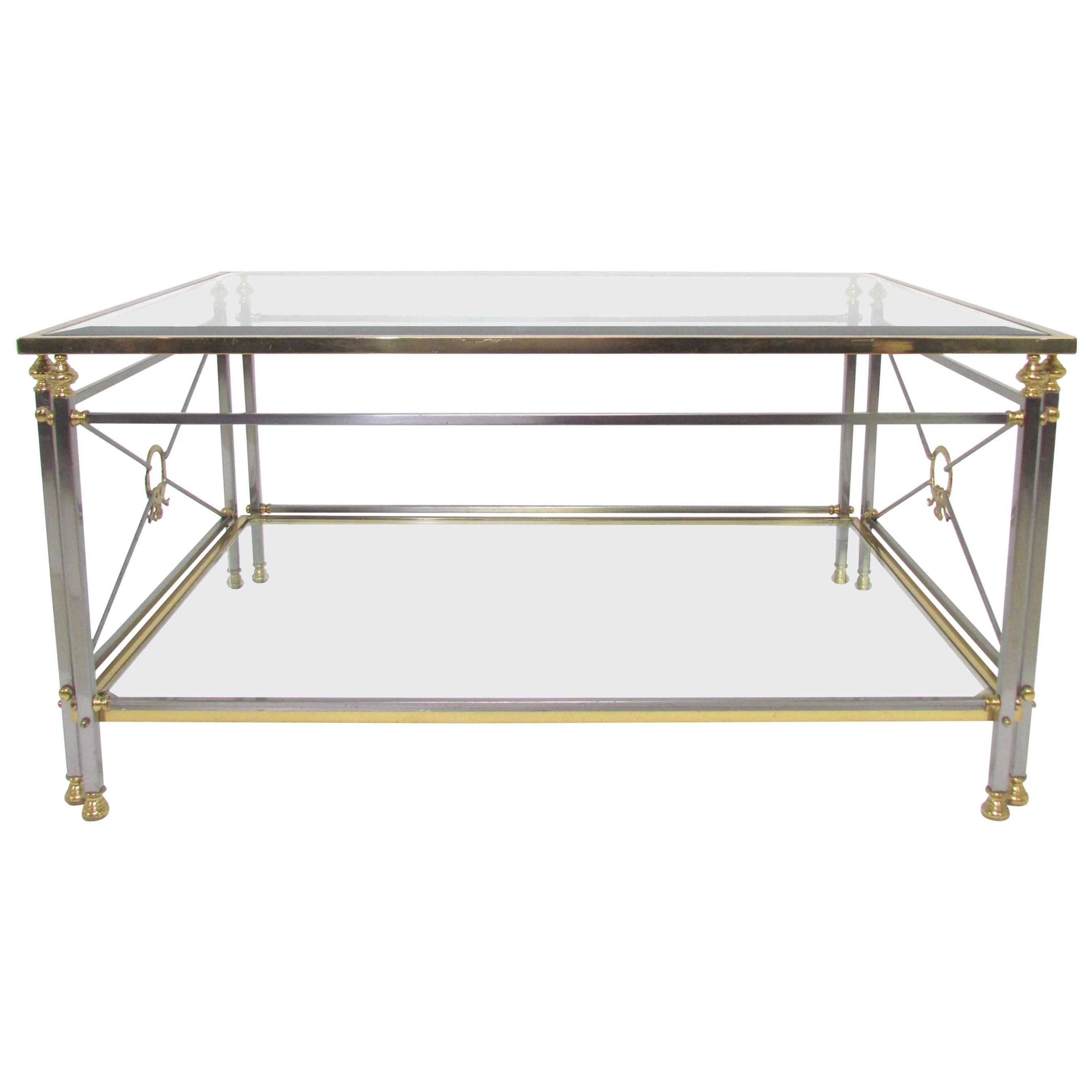 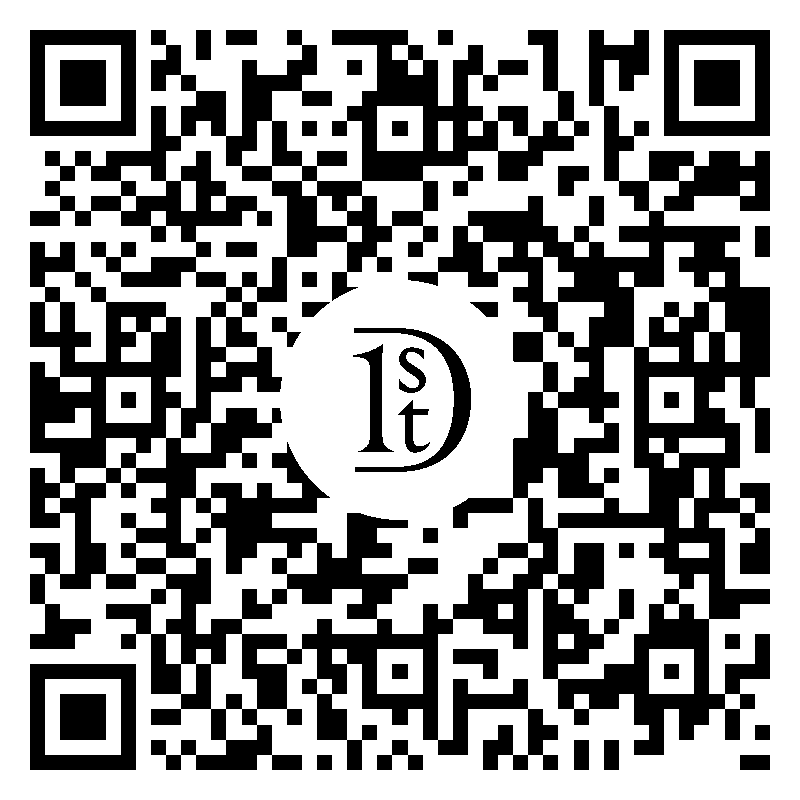 Solid brass coffee table by Maison Jansen. Stylish Mid-Century Modern two-tier coffee table by Maison Jansen. This sophisticated piece is in great vintage condition. Measurements: W.74 x D.119 x H.45 cm. The table will be shipped overseas in a custom made wooden crate. Cost of insured transport to the US crate included is Euro 1250. Maison Jansen (House of Jansen) was a Paris based interior decoration office founded in 1880 by Dutch born Jean-Henri Jansen. Jansen is considered the first truly global design firm, serving clients in Europe, Latin America, North America and the Middle East. House is located at 23, rue de l’Annonciation, Paris. From its beginnings Maison Jansen combined traditional furnishings with influences of new trends including Anglo-Japanese style, the Arts & Crafts movement and Turkish style. The firm paid great attention to historical research with which it attempted to balance clients’ desires for livable, usable and often dramatic space. Within ten years the firm had become a major purchaser of European antiques and by 1890 had established an antiques gallery as a separate firm that acquired and sold antiques to Jansen’s clients and its competitors as well. 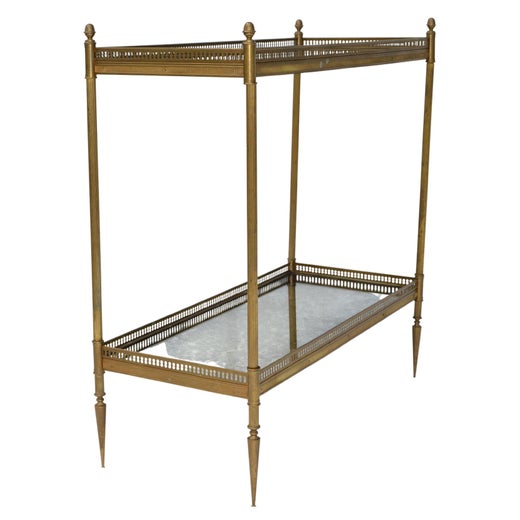 The Dutch-born Jean-Henri Jansen (1854–1928) was only in his mid-20s when he set up his Parisian design business in 1880. By the time he died, Maison Jansen had become the world’s first international decorating firm. Today, it is still regarded as one of the most notable firms and period furniture manufacturers in history, with its vintage floor lamps, tables, dressers and other furnishings remaining in demand.

Maison Jansen initially came to international prominence in 1883 when the young Jean-Henri Jansen traveled to Amsterdam to participate in the International Colonial Exposition, an event that featured presentations by 28 different nations and was attended by over a million visitors. There he exhibited as part of the French pavilion and won the silver medal. This led to two prominent new clients: King William III of the Netherlands and King Alfonso XII of Spain. Next was King Leopold II of Belgium for the interiors of the Château du Laeken, as well as commissions for Egypt’s King Farouk and Great Britain’s King Edward VII. Thanks to his participation in global expositions and fairs, Jansen expanded the renown of the firm so that its studios would reign in such major cities as London, New York, Buenos Aires, Cairo and many more.

Jansen was not only sought after for his taste but also for his custom period-inspired pieces. For example, in the Count and Countess de Revilla de Camargo’s Havana mansion, Jansen designed Louis XV–style furniture crafted from Cuban mahogany, enhancing Maison Jansen’s reputation as an expert maker. His custom furniture business was so successful that by 1900 he had opened his own atelier and employed around 700 artisans. In the 1960s, the firm, then led by Stéphane Boudin, worked with Jacqueline Kennedy on the refurbishment of rooms in the White House, including such spaces as the Queens’ Sitting Room, which featured bright blue fabric and neoclassical details.

Maison Jansen continued to produce furniture designs through the 20th century, responding to shifting tastes from Art Nouveau to Modern Regency. The atelier and studio officially closed its doors in 1989. 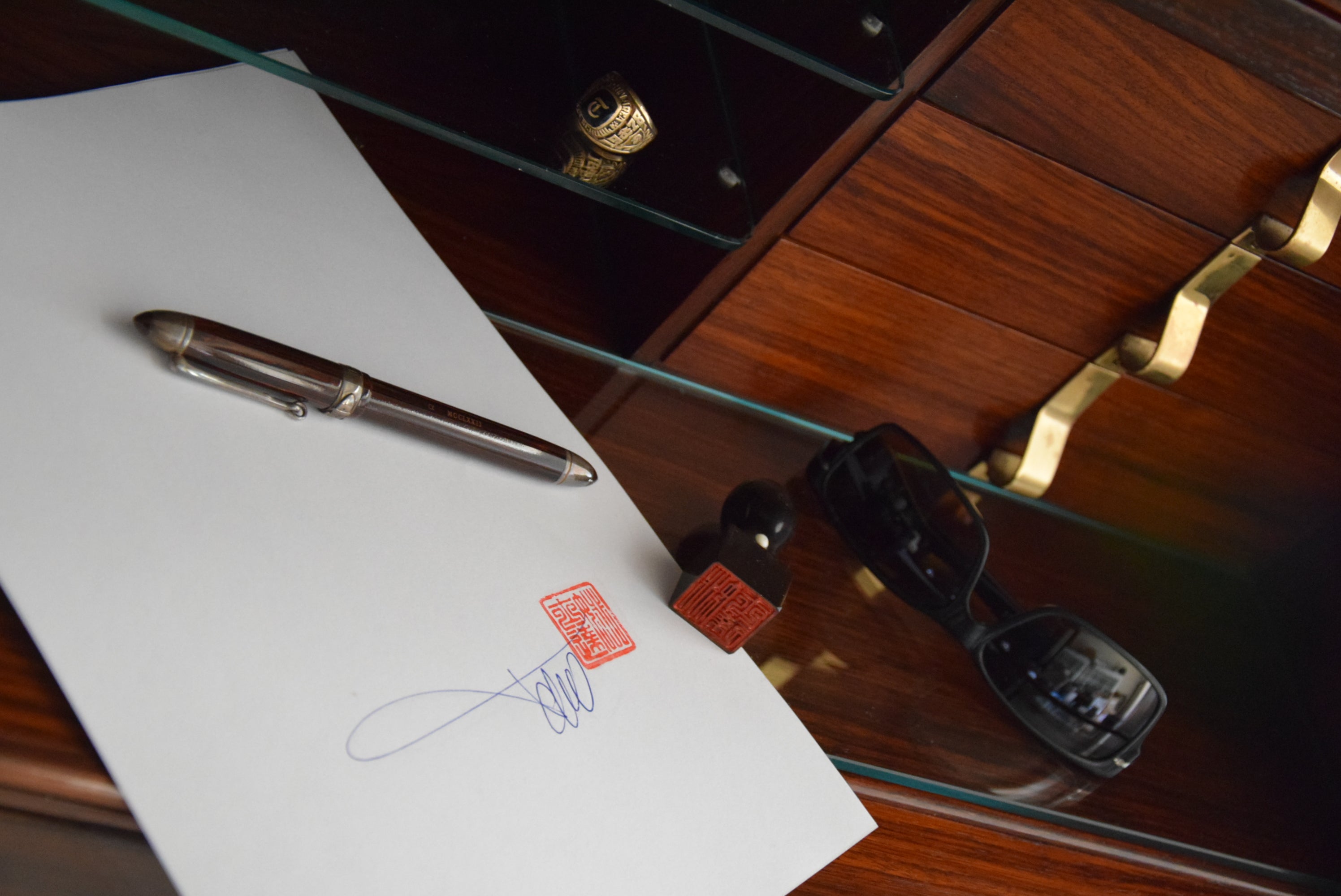 About the Seller
5 / 5
Located in Weesp, Netherlands
Platinum Seller
These expertly vetted sellers are 1stDibs' most experienced sellers and are rated highest by our customers.
Established in 1996
1stDibs seller since 2015
250 sales on 1stDibs
Typical response time: <1 hour
More From This Seller

Hollywood Regency Coffee Table in the Manner of Maison Jansen