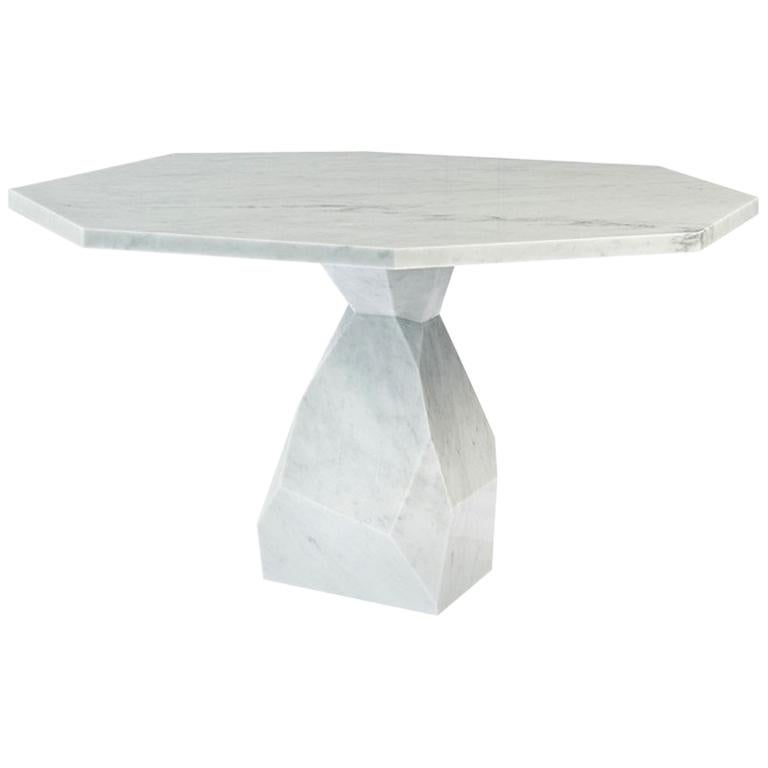 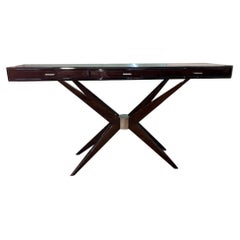 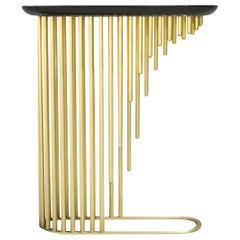 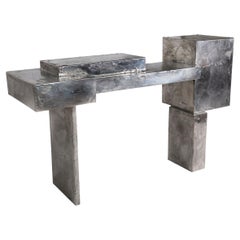 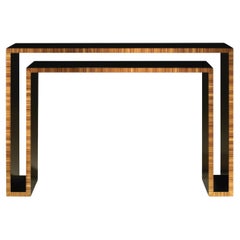 Console Table, Rainbow Poplar Hand-Made Minimal Design by Mark Bowers
Located in Chicago, IL
The simplicity of this console table allows for the natural beauty of the wood to come through. Rainbow poplar has subtle shades of green, purple, grey and beige made possible by dif...
Category

Modern Floating Walnut Rectangular/Square Coffee Table
Located in El Paso, TX
This all natural high end coffee table has a very clean and unique look, it´s made to appear like it´s floating. Table top and base are both 2" thick, making it substantial enough ...
Category

Chino, Chinese Influence Rattan Console
Located in Bangkok, TH
“Chino” is inspired by the traditional Chinese console from Qing Dynasty. Employing graphic practice, rattan is used to outline the basic shape of the table while black and white cor...
Category

21st Century Monroe Console Table in Polished Brass, Emperador Marble Tabletop
Located in Oporto, PT
Inspiration: Monroe, the sexiest pin-up of the 1950s, inspired another piece of Art & Design. This piece was born from the Monroe floor lamp and its design captures the essence of ...
Category

Sinatra Metal and Marble Luxury Console Made in Italy

Contemporary QD18 Console with Brushed Steel, Bronzed Metal and Wood drawer
By Quincoces - Drago
Located in Milan, Lombardy
The QD18 console structure is made with brushed steel, bronzed metal and the drawer is made with wood and brass details. This console's clean lines make it adabtable to many spaces a...
Category

Contemporary Crafted Cabinet, Sideboards Living Room Furniture Basswood
By Cara e Davide
Located in Meolo, Venezia
A wooden grating in a two-dimensional form traditionally made with wooden slats, carabottino is considered to be an accessory element of relative importance, similar to window and ...
Category

Vintage Italian pleated Travertine Pedestal Console Table, circa 1970s
By Natuzzi
Located in View Park, CA
Vintage Italian travertine low console table with pleated pedestal base, circa 1970s. Made in Italy as the photos attest. Very little wear save a small chip at the bottom of the base...
Category

Marble Rock Table, Contemporary Marble Dining Table
Located in New York, NY
This minimalistic piece made from a single block of marble. The likeness of its faceted geometry can be found in nature in raw form. Dimensions: W 140 cm 55.1” D 140 cm 55.1” H 7...
Category

Italian Brass Mirror and Console, 1940s
By Gio Ponti, Osvaldo Borsani
Located in Vienna, AT
Italian brass mirror and console from the 1940-1950s. Very intricate design with elaborate brass decorations on the rim of the mirror as well as on the console. The top of the consol...
Category

French Oak Side Table
Located in Baton Rouge, LA
This simple table was beautifully constructed of solid oak in France, circa 1860. Polished with a French wax paste, the top surface shows off the rich color and pattern of the wood. ...
Category

Arco Sidedesk 'arredamenti metallici serie' by B.B.P.R. Studio for Olivetti
By Olivetti, Studio BBPR
Located in Munster, NRW
Sidedesk/desk made of metal panels on angled legs, adjustable hexagonal feet in black and a chest of five drawers on rails in light gray / beige plastic, which is in a good vintage c...
Category

DD Hexagon Console Table Cultivated Mahogany
By Dusty Deco
Located in Stockholm, SE
A small console table that fits perfectly in your hallway or use it a small side table with a nice lamp on it. We love the idea to pair it with our hexagon table lamp. Comes in culti...
Category

Extra Large Brutalist Console with Iron Base and Glass Top
Located in Troy, MI
Found in Italy, this Brutalist style console has an iron base and thick glass top with polished edges, circa 1970s. Tabletop and lower iron shelf can be flipped or be oriented the ot...
Category

Extra Large Brutalist Console with Iron Base and Glass Top

1970 Console Magazine Holder House Jansen
By Maison Jansen
Located in Saint-Ouen, FR
The support of the console is entirely in gilded brass, it is decorated with 4 rings distributed on the 2 upper faces and decorated with 2 heads of Lions on the two lateral faces in ...
Category