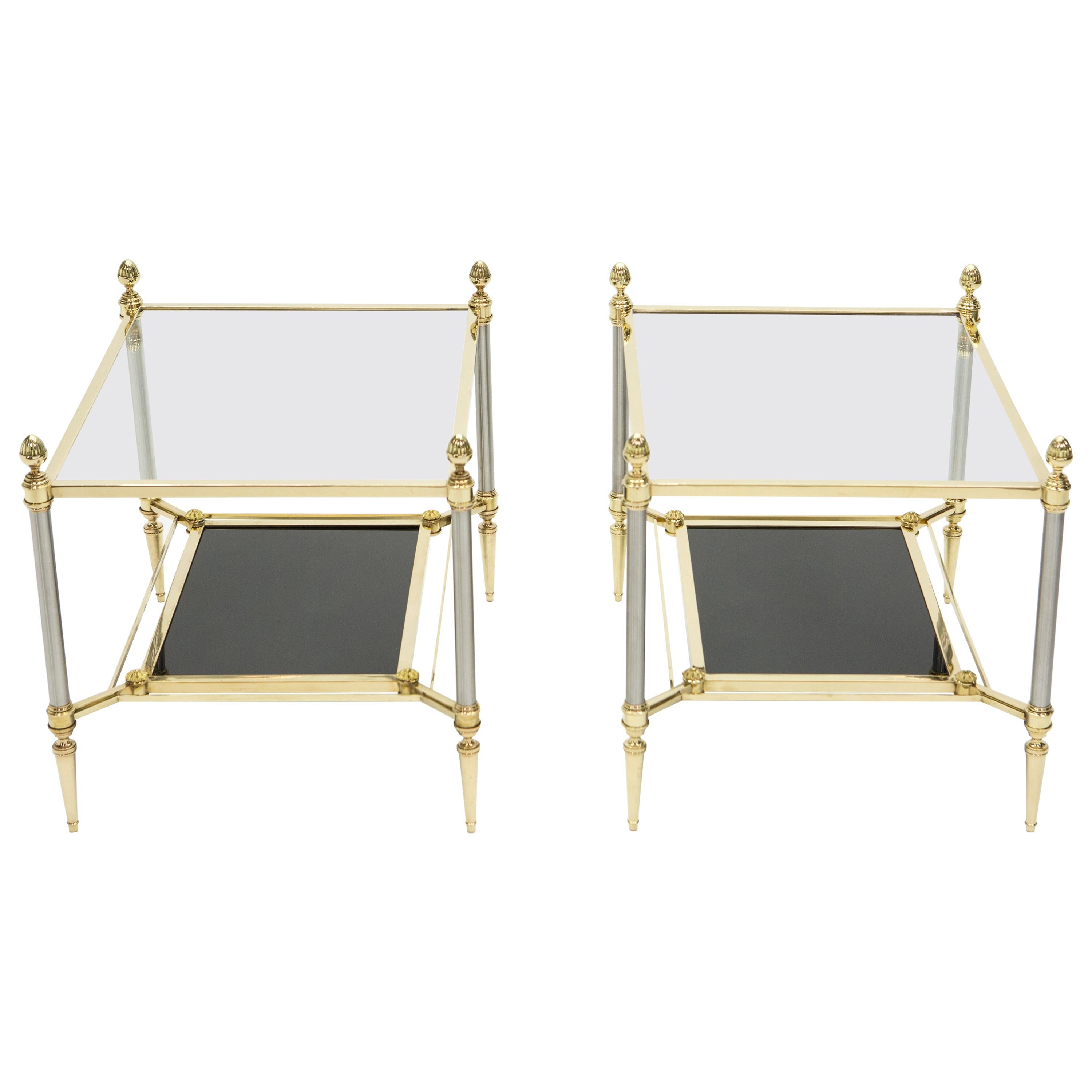 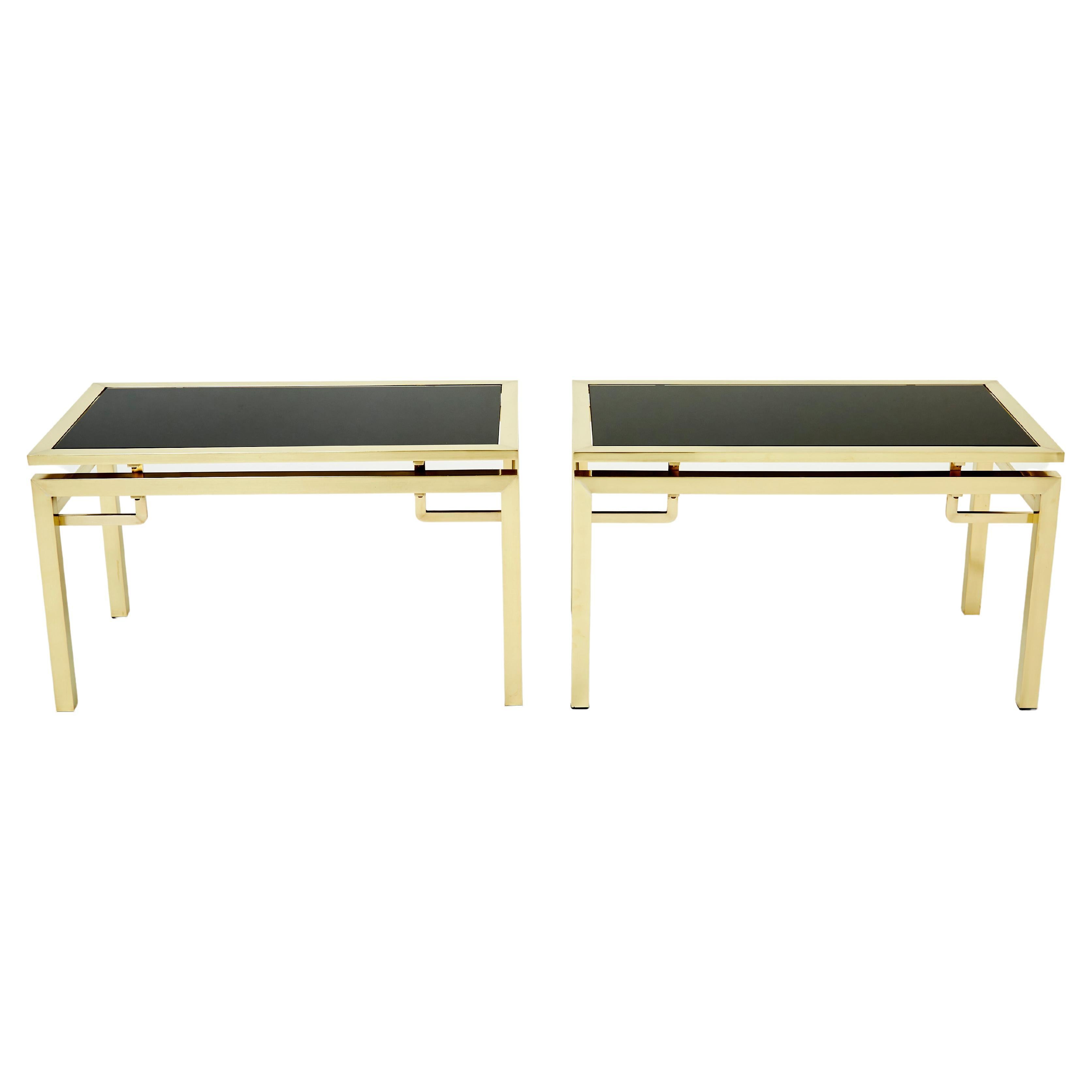 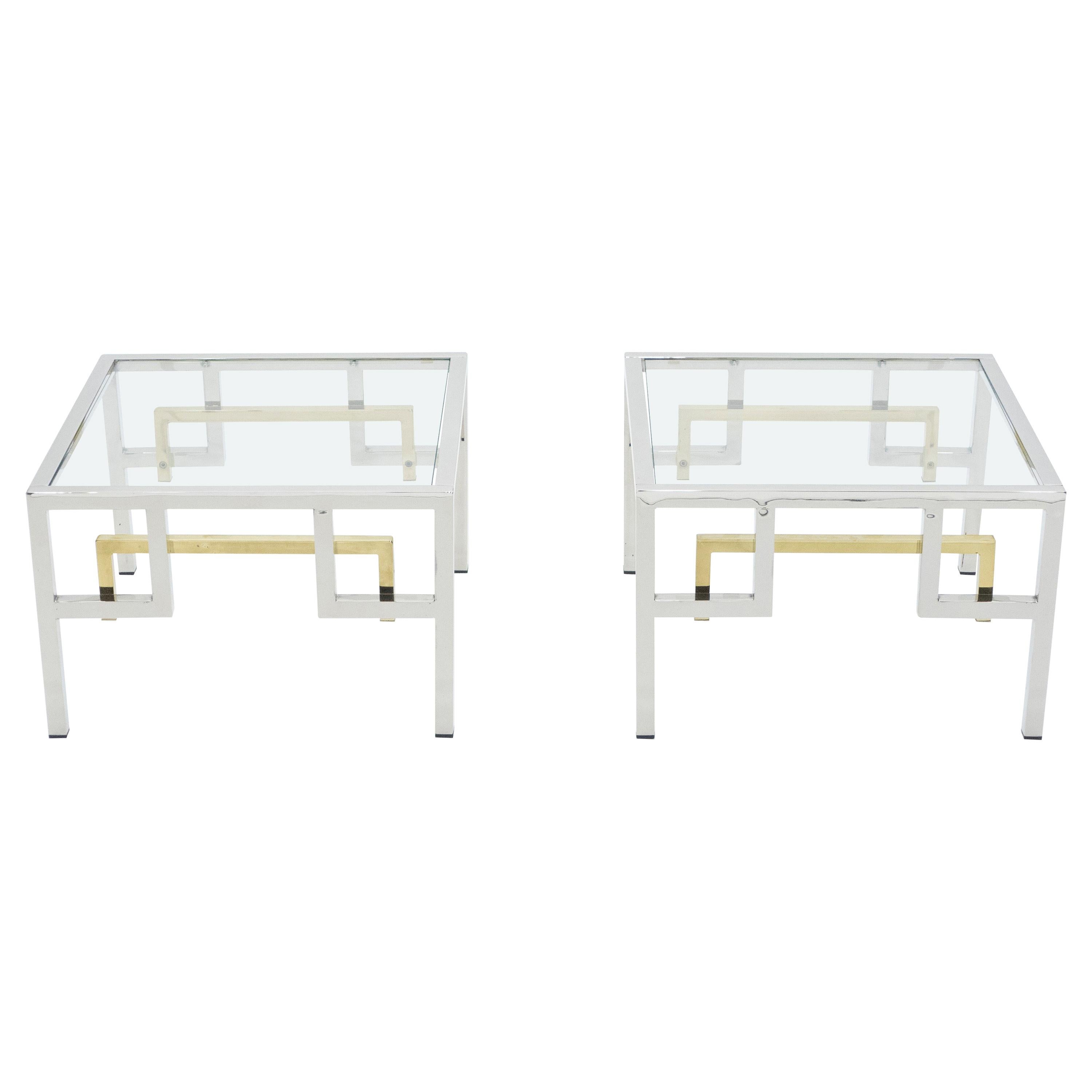 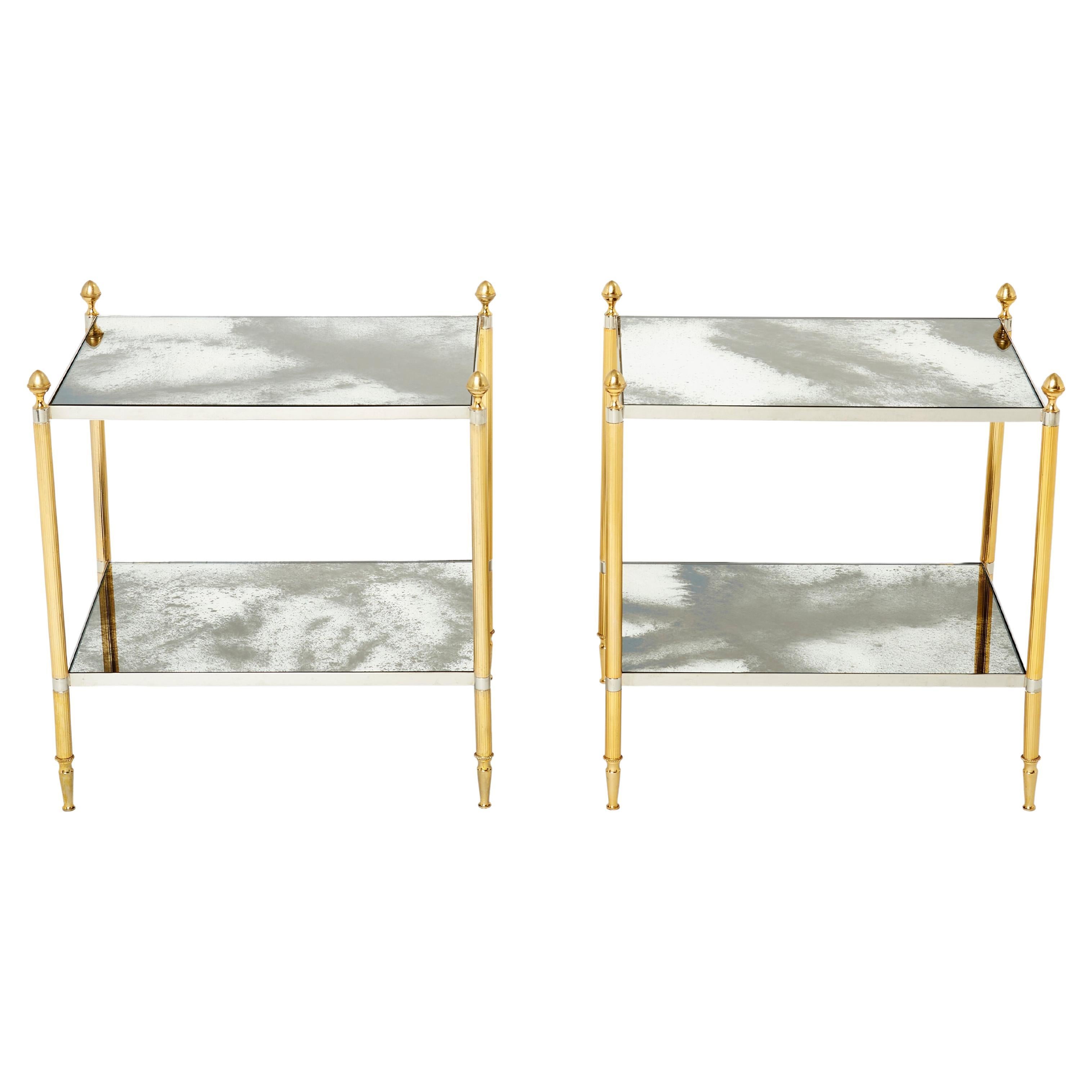 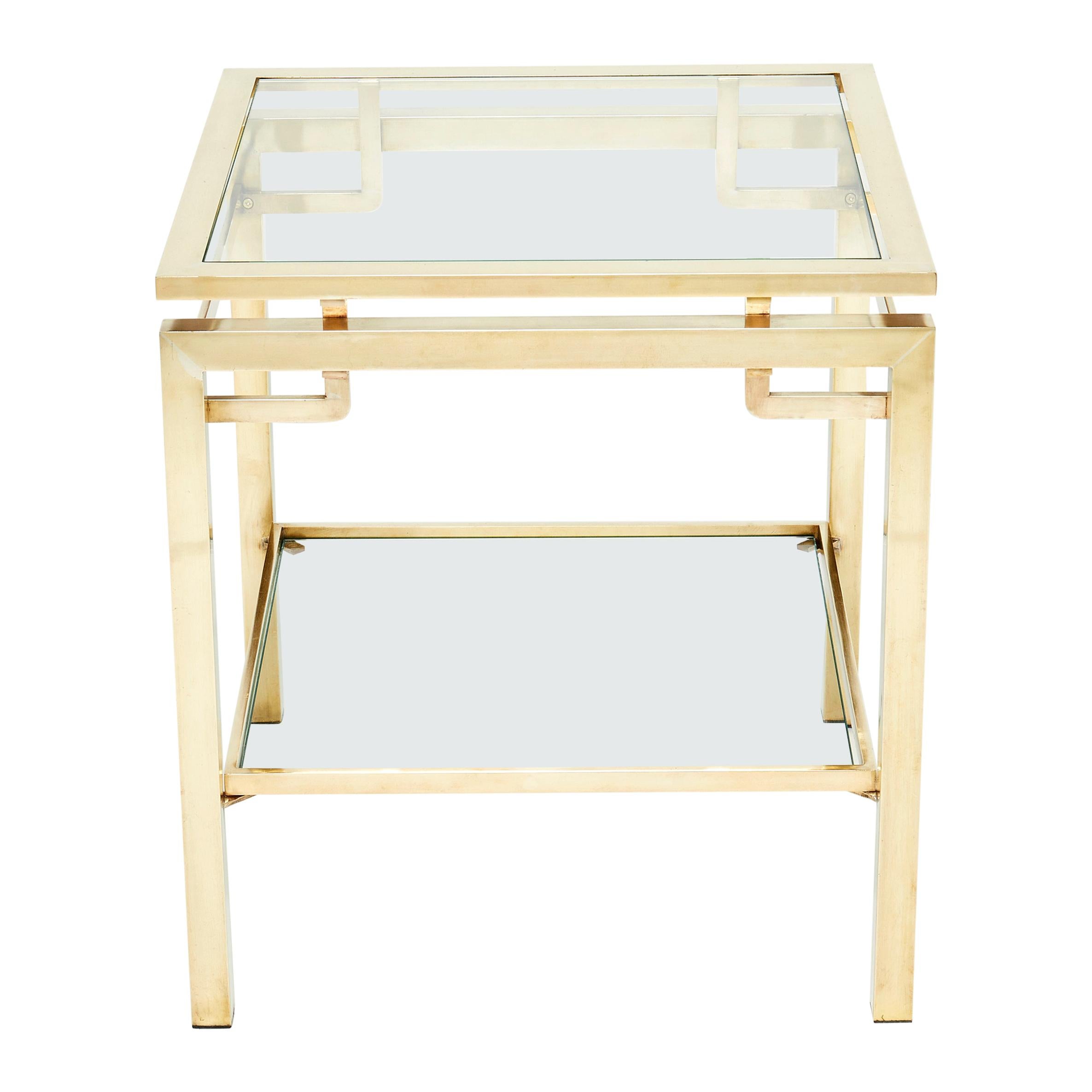 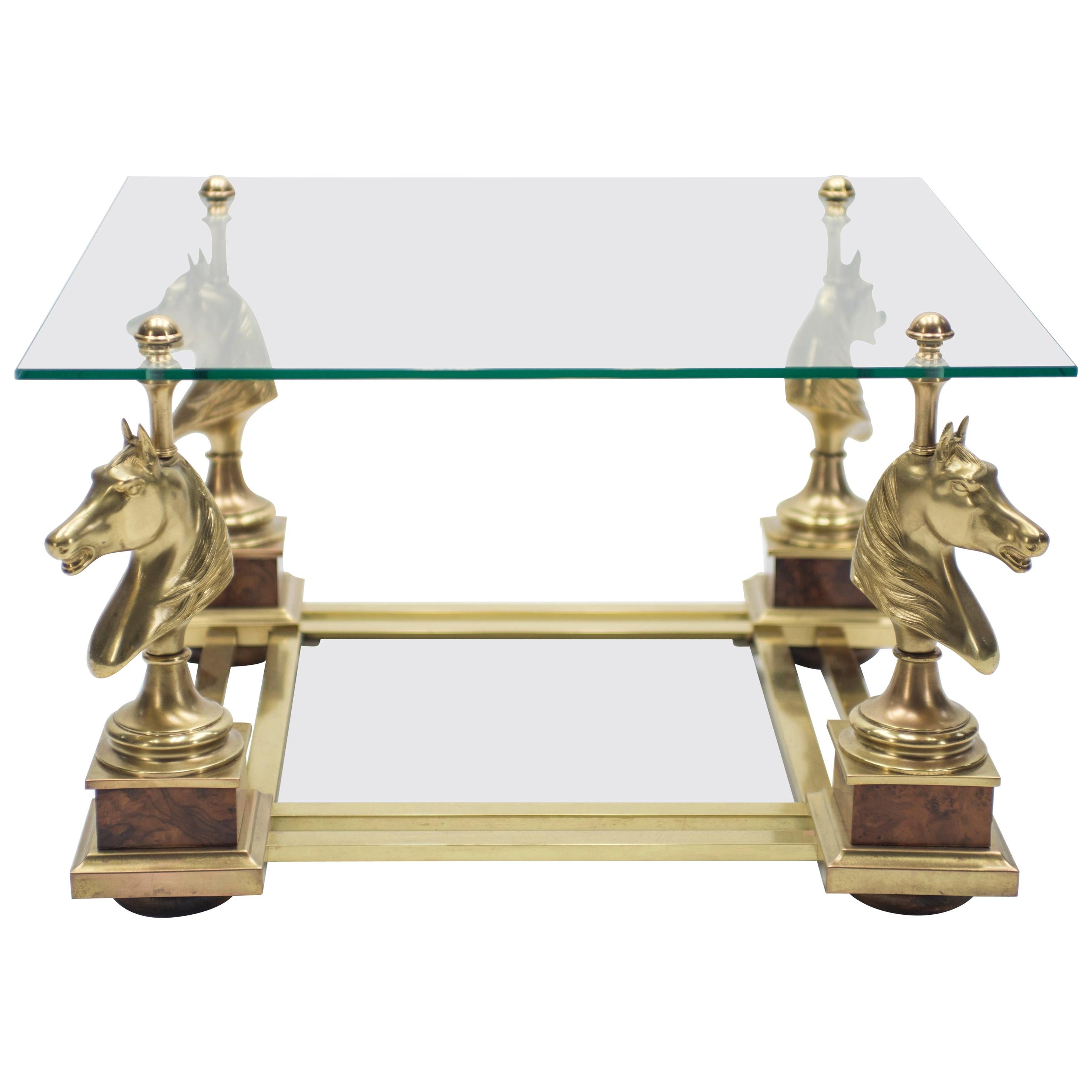 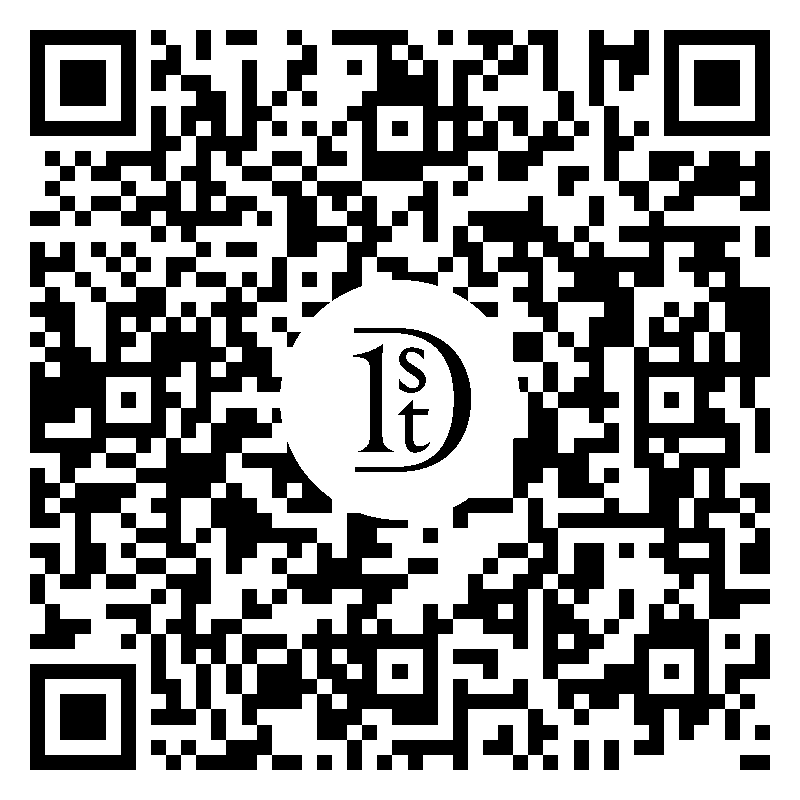 This table’s beautiful, polished brass base and feet reflect the Chinese-inspired design that dominated many creations by Maison Jansen. Mid-Century Modern elements like sleek, clean lines are given an ornamental flare, with a brand new black opaline glass top making this side table an exciting piece. 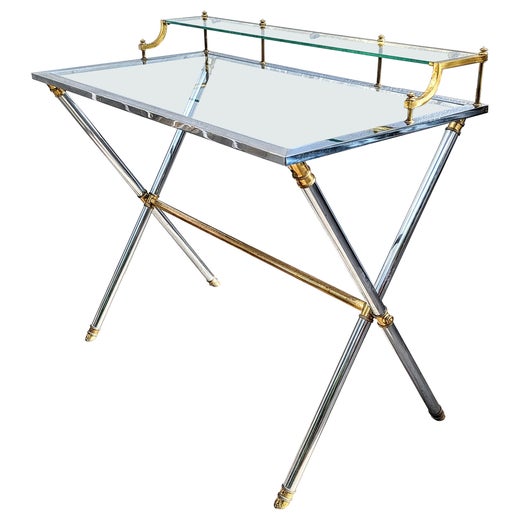 The Dutch-born Jean-Henri Jansen (1854–1928) was only in his mid-20s when he set up his Parisian design business in 1880. By the time he died, Maison Jansen had become the world’s first international decorating firm. Today, it is still regarded as one of the most notable firms and period furniture manufacturers in history, with its vintage floor lamps, tables, dressers and other furnishings remaining in demand.

Maison Jansen initially came to international prominence in 1883 when the young Jean-Henri Jansen traveled to Amsterdam to participate in the International Colonial Exposition, an event that featured presentations by 28 different nations and was attended by over a million visitors. There he exhibited as part of the French pavilion and won the silver medal. This led to two prominent new clients: King William III of the Netherlands and King Alfonso XII of Spain. Next was King Leopold II of Belgium for the interiors of the Château du Laeken, as well as commissions for Egypt’s King Farouk and Great Britain’s King Edward VII. Thanks to his participation in global expositions and fairs, Jansen expanded the renown of the firm so that its studios would reign in such major cities as London, New York, Buenos Aires, Cairo and many more.

Jansen was not only sought after for his taste but also for his custom period-inspired pieces. For example, in the Count and Countess de Revilla de Camargo’s Havana mansion, Jansen designed Louis XV–style furniture crafted from Cuban mahogany, enhancing Maison Jansen’s reputation as an expert maker. His custom furniture business was so successful that by 1900 he had opened his own atelier and employed around 700 artisans. In the 1960s, the firm, then led by Stéphane Boudin, worked with Jacqueline Kennedy on the refurbishment of rooms in the White House, including such spaces as the Queens’ Sitting Room, which featured bright blue fabric and neoclassical details.

Maison Jansen continued to produce furniture designs through the 20th century, responding to shifting tastes from Art Nouveau to Modern Regency. The atelier and studio officially closed its doors in 1989.

1stDibs Buyer Protection Guaranteed
If your item arrives not as described, we’ll work with you and the seller to make it right. Learn More
About the Seller
5.0
Located in Paris, France
Platinum Seller
These expertly vetted sellers are 1stDibs' most experienced sellers and are rated highest by our customers.
Established in 2013
1stDibs seller since 2017
141 sales on 1stDibs
Typical response time: <1 hour
More From This SellerView All
People Also Browsed
You May Also Like
Featured in Design ValuesView All