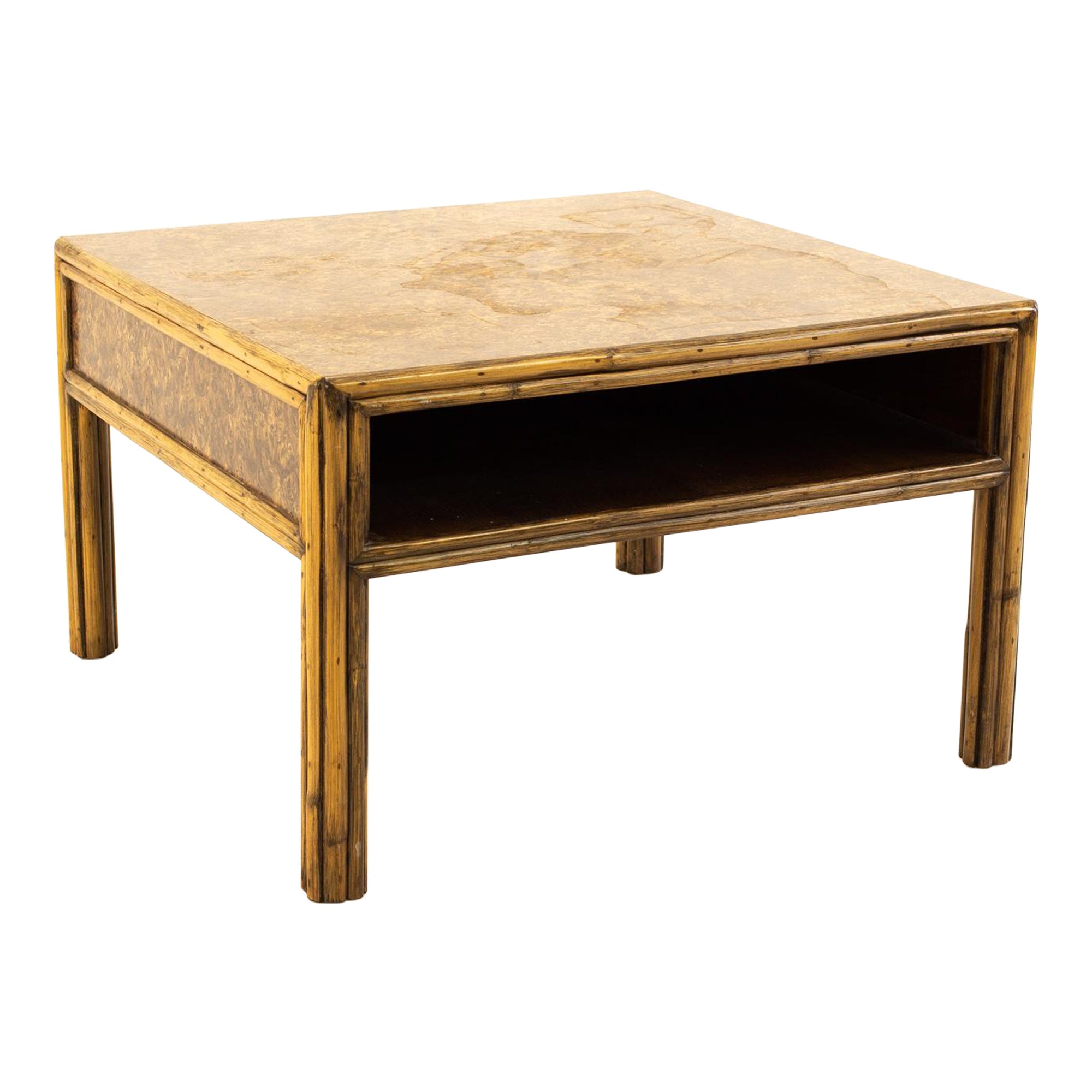 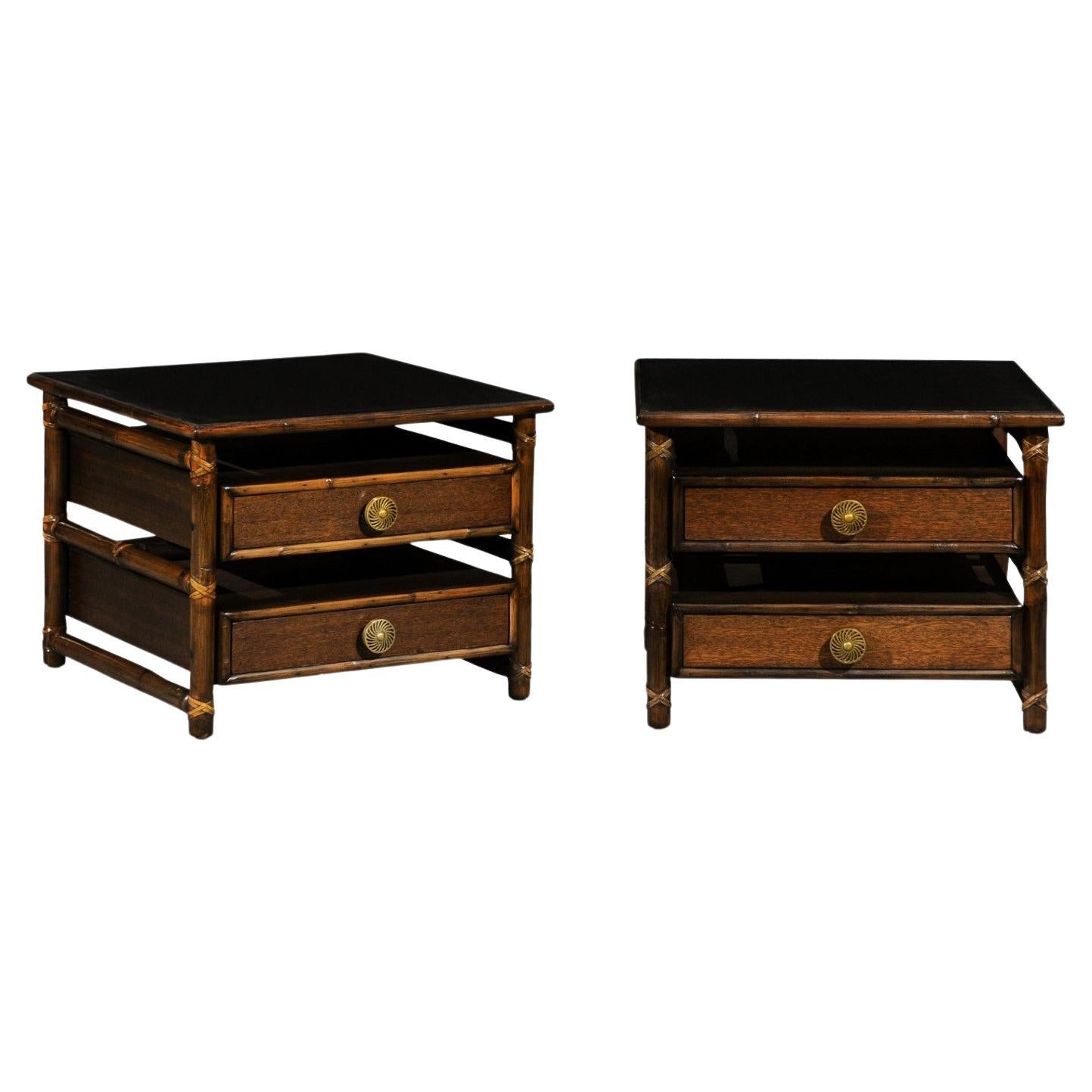 Pair of Bamboo Side, End Tables Attributed to Ficks Reed 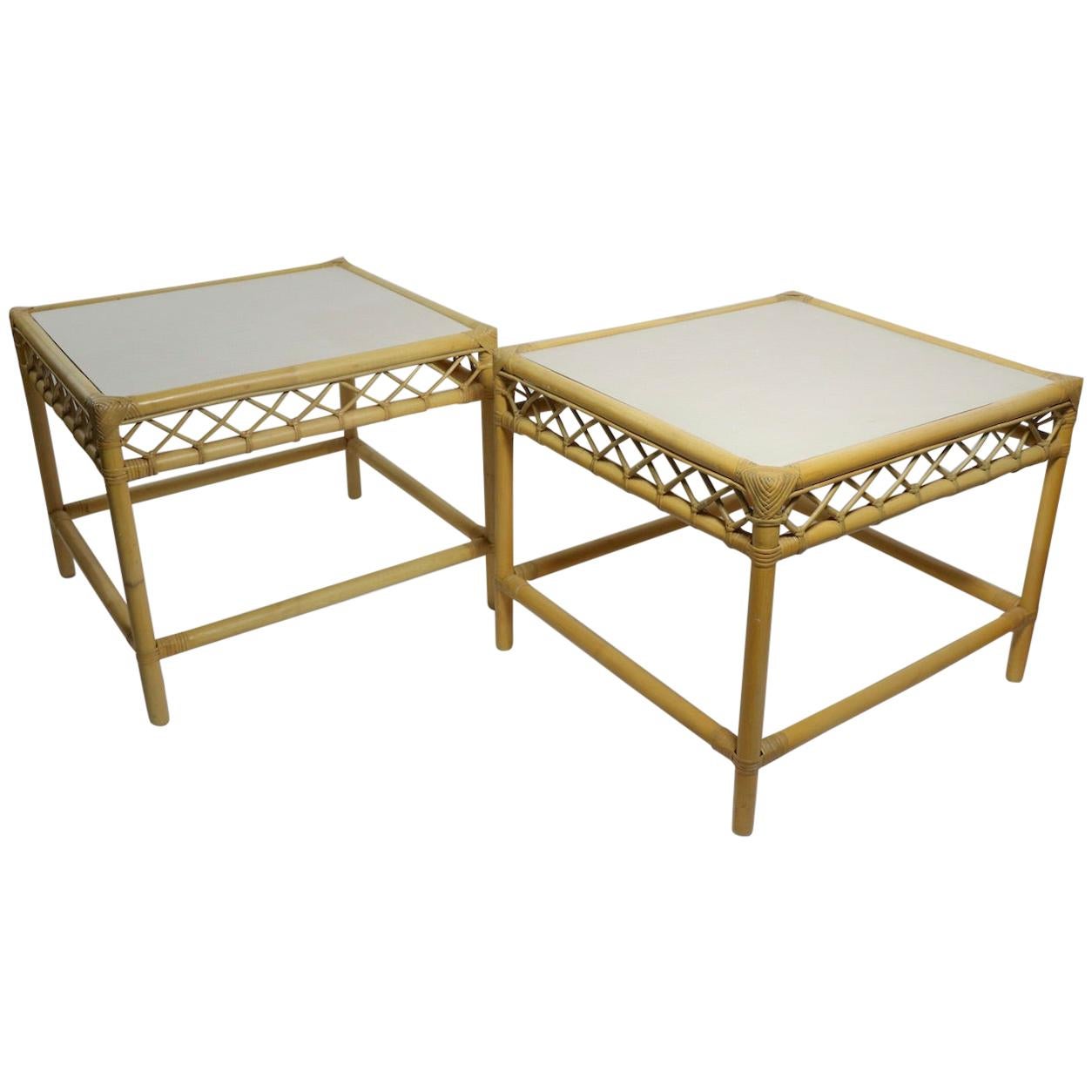 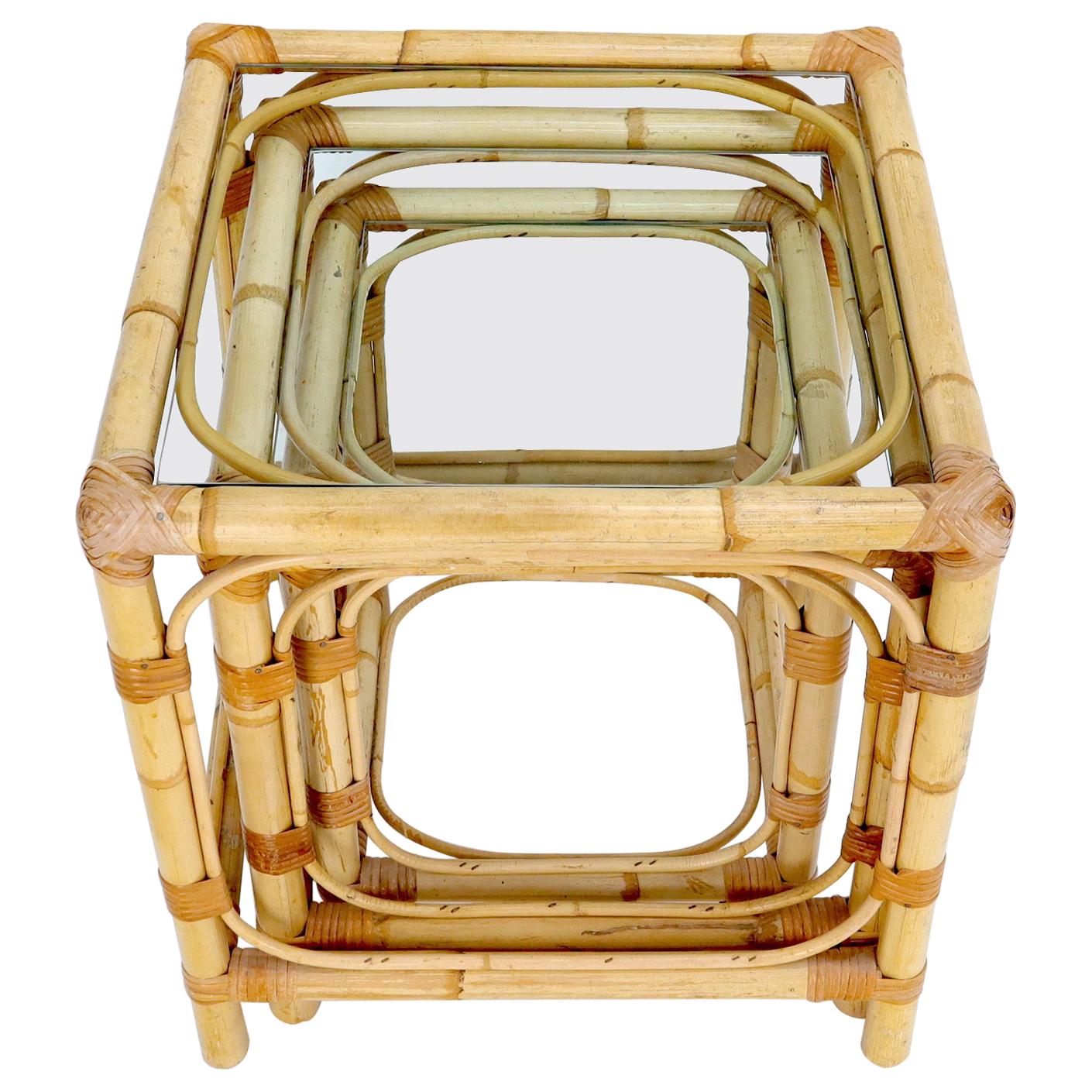 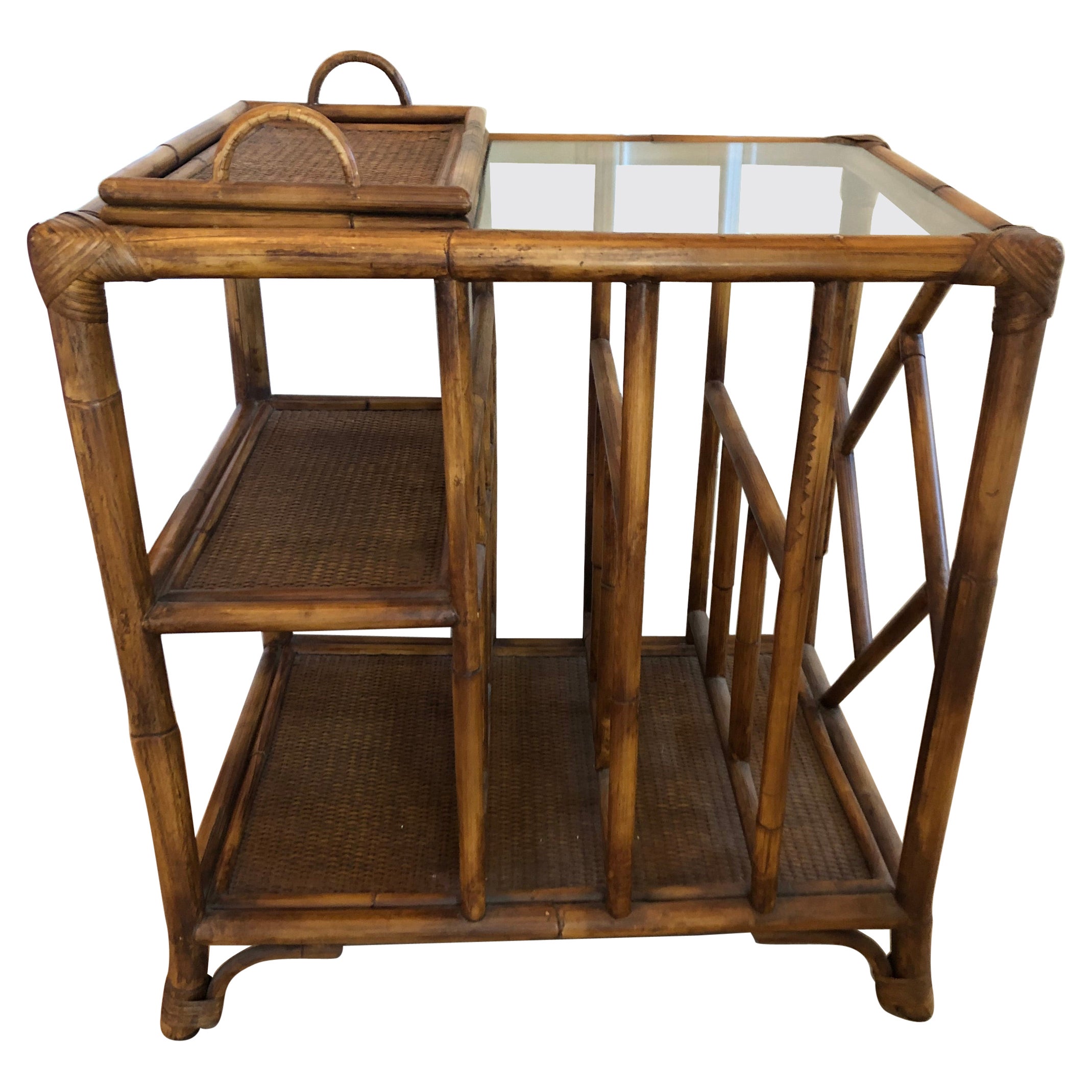 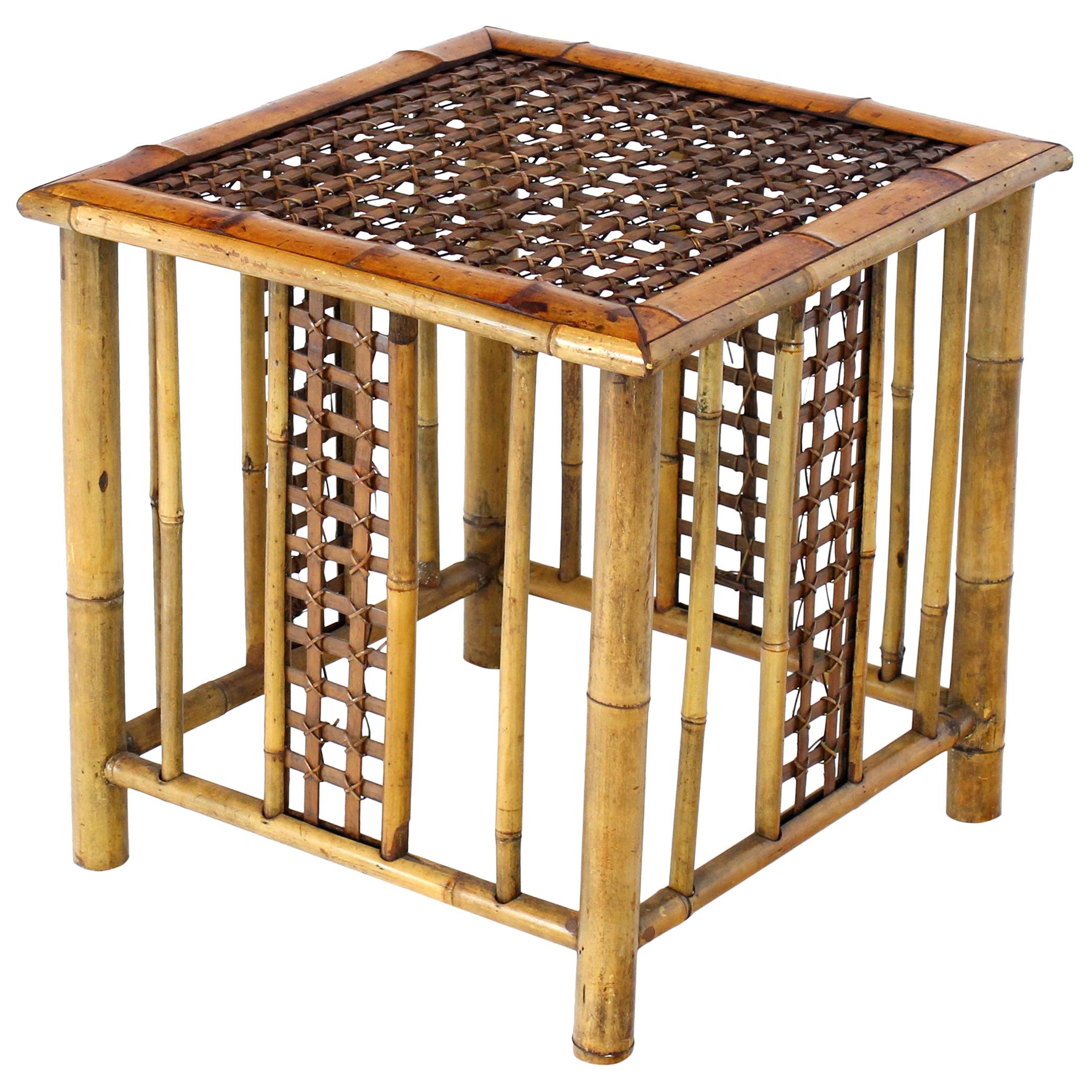 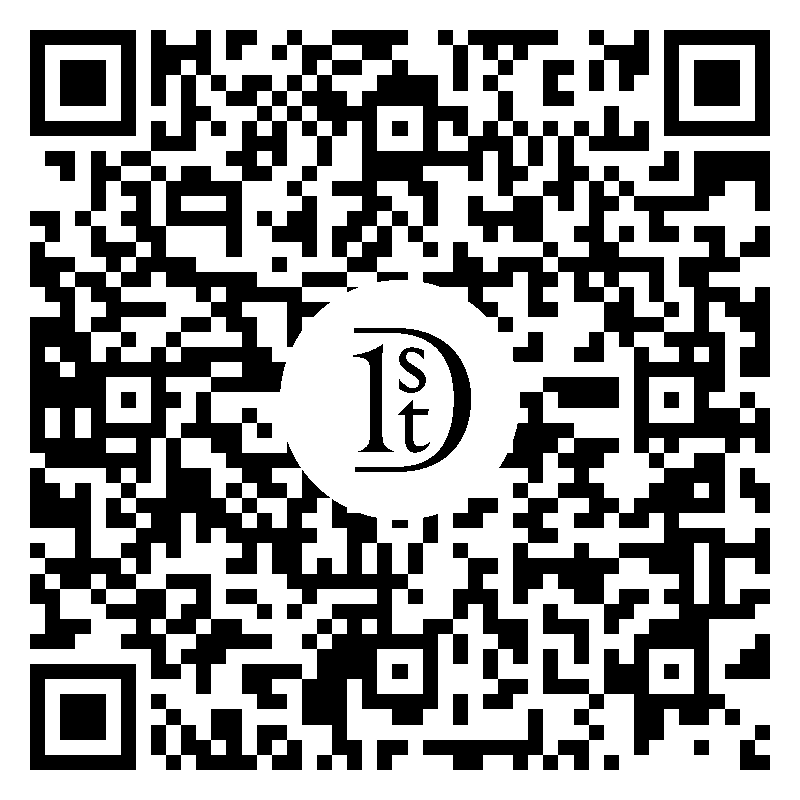 A very nice pair of bamboo and white laminate top end tables by McGuire, circa 1980s. Beautiful craftsmanship and sturdy construction on these open bamboo base tables. They are in very good vintage condition and measure 21.25"W x 15.25"D x 25"H. #2043. 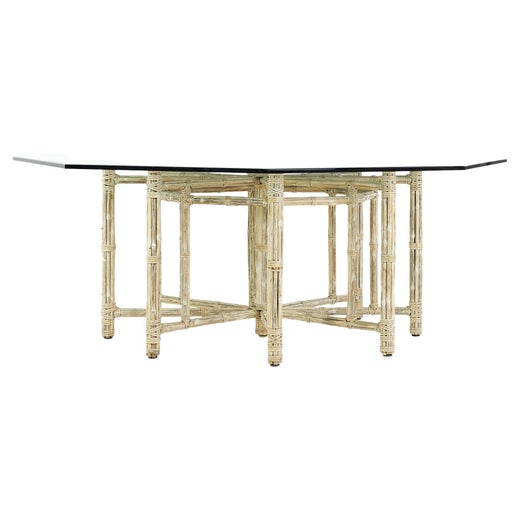 Like so many artists and designers, husband and wife John McGuire (1920–2013) and Elinor Stevenson (1914–2005) became masters in their trade by accident. For the founders of McGuire Furniture Company, well, furniture wasn’t actually in the plans.

The couple met just before the start of World War II (during which John was in the U.S. Navy and Elinor was a navigation instructor) and got married after it ended. They settled down in San Francisco where John held a couple of jobs — among them selling newspaper ads for the San Francisco Examiner while Elinor worked for Boeing Aircraft. Soon, an old Navy buddy of John’s asked him to help sell a bunch of rattan furniture and, needing the money, John agreed. His side business became so successful that John decided to quit his ad-sales job and work full-time in design.

In 1948, McGuire Furniture Company was born. Alongside the mid-century modern furniture designs then gaining popularity in the United States, John introduced an unconventional idea: traditional armchairs, stools and tables made of natural materials such as bamboo, which was strong yet could be rendered pliable when steamed, that were intended for the indoors rather than the front porch.

The brand’s first success was the now famous Director’s X-Chair by Leonard Linden. The military-campaign-style solid oak folding chair launched in 1956 and saw rattan binded with rawhide strips and a high-grade leather slug seat and back that eliminated the need for a plush cushion. Elinor, too, designed some of the brand’s popular pieces, such as 1968’s Cracked Ice chair. With its rattan oval back a dazzling celebration of geometric forms that give it its charming moniker, the Cracked Ice chair was an instant classic and is one of the brand’s most recognizable designs.

Today, McGuire and another American furniture manufacturer, Baker Furniture Company, comprise Baker Interiors Group. McGuire remains true to the founders’ ideals and commitment to crafting the kind of organic modern furnishings that are synonymous with the warm and relaxed feel of California design. The company has collaborated with interior designers Steven Volpe, Orlando Diaz-Azcuy and Nicole Hollis, and, as of 2019, its luxury furnishings share a 16,500-square-foot showroom with Baker’s in San Francisco. Some of the earliest McGuire Furniture Company designs are part of the permanent collection at the Cooper Hewitt, Smithsonian Design Museum in New York City.

Find a range of McGuire Furniture on 1stDibs.

1stDibs Buyer Protection Guaranteed
If your item arrives not as described, we’ll work with you and the seller to make it right. Learn More
About the Seller
4.9
Located in San Diego, CA
Platinum Seller
These expertly vetted sellers are 1stDibs' most experienced sellers and are rated highest by our customers.
Established in 2000
1stDibs seller since 2012
2,461 sales on 1stDibs
Typical response time: <1 hour
More From This SellerView All
People Also Browsed
You May Also Like
Featured in Design ValuesView All