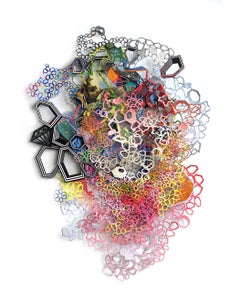 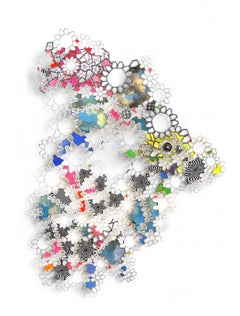 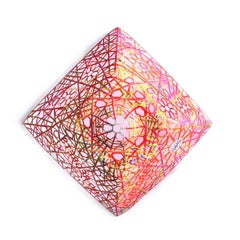 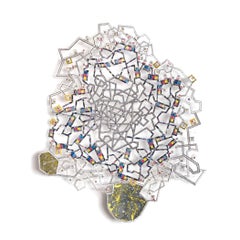 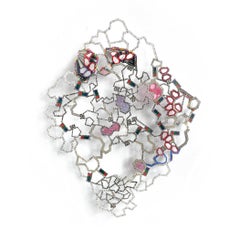 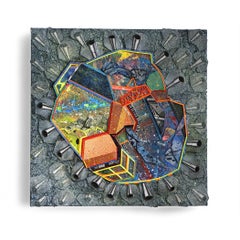 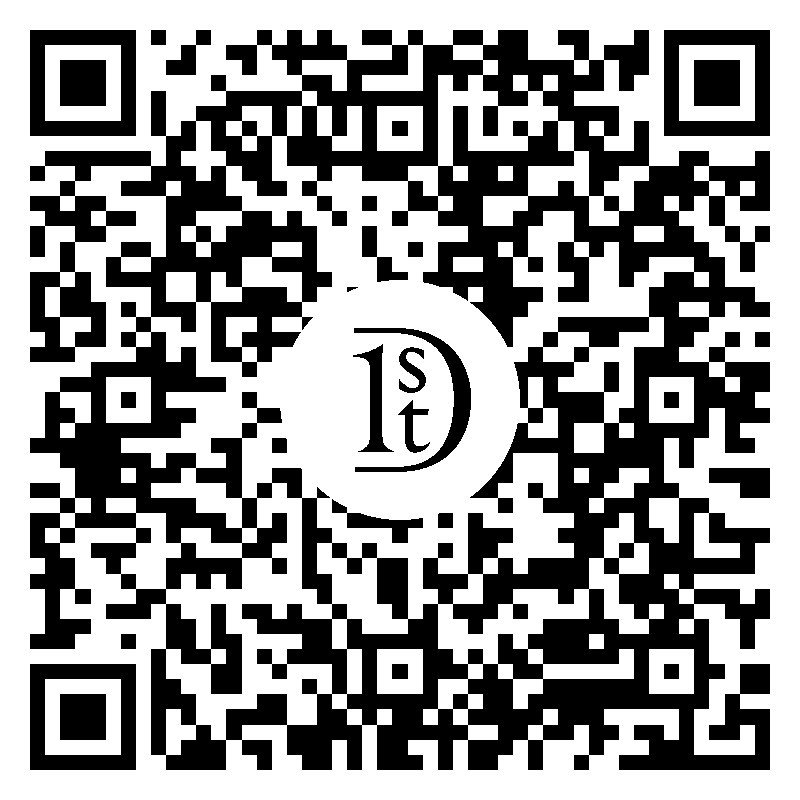 In Baker’s work, there is solace in the geometry of fundamentals, and a practice that focuses on the ephemeral nature of paper and the ease of its transportability, which allows her to create large-scale constructions. A desire for definitive certainties and incontrovertible truths in an era of “alternative facts”, precipitate the need for Baker to assert her clarification of evidence. A new major installation has been created for her exhibition at ODETTA that layers baroque design elements found in paper cup carrying trays with anxiety-provoking phrases, rendered as gorgeous, yet fragile paper spheres. This collapsible, frantic universe parallels the global climate created by our current administration. Nancy Baker is compelled to put things together; underscoring the process of combining and interlocking forms in elegant configurations, she interweaves mathematical data in her constructions that speak to her need for stasis and a reliable reality. The recently new experience of living once again in an urban environment has made her sensitized to the dominating forces of infrastructure, and to those corresponding interstitial spaces that, arouse wonder and anxiety. The competition for space and sky has been instructive; her work reflects this struggle by recreating the battlefield in the studio, and attempting to tame it, and ultimately, to own it. For the exhibit, No Regrets, Baker seizes upon current political anxiety that informs her series of works which employ text from the US Constitution, in addition to mathematical constructs such as Pi, and the Golden Section. Intermixed within her constructions are additional phrases which seek to undermine the authority of No Regrets, such as Fewer Answers, No Illusions, Some Ideas, and Little Idea How. In claiming a definitive confidence, there is for Baker, consequences of hubris which reflect a truly complex lifetime of shifting doubts. For No Regrets, Baker has made good use of the ubiquitous commercially available paper drink carrying tray. She has deconstructed this object, recreating forms that strangely reflect their Baroque sensibility, inherent in the original article. Reimaging these paper pulp products as eccentric participants in her constructions, Baker’s chosen literary tropes signify a contemporary fear and suspicion that perhaps the enemy is invisible and unaccountable Her paper constructions combine digitally printed, hand and laser cut geometric shapes that are painted, sprayed, scraped and gouged. Incorporated into these paper, polystyrene and Dura-Lar sections are glitter, paint, modeling paste, gold leaf, printed commercial matter and recycled paper pulp forms. Nancy Baker earned her BFA from the School of Visual Arts, New York, NY. Her work has been widely exhibited throughout the US, including ODETTA Gallery in Brooklyn, NY; Front Room Gallery in Brooklyn, NY; Mark Moore Gallery, CA; Winkleman Gallery, NYC; Schema Projects, Brooklyn, NY; Marcia Wood Gallery, Atlanta, GA; Jancar Gallery, Los Angeles, CA; NC Museum of Art, Raleigh, NC; 1708 Gallery, Richmond VA; Heriard Cimino Gallery in NOLA; and Lump Gallery, Raleigh, NC, and in Fall of 2018, the Changwon Sculpture Biennale in South Korea. She has received numerous awards, including two North Carolina Artists Fellowships, a Tennessee Individual Artist Fellowship, and an NEA Southern Arts Fellowship. She was awarded a commission with New York City MTA Arts and Design for two train stations in Brooklyn, which was fabricated in stainless steel. She was also was commissioned to create a new work for Karen Brooks Hopkins, the Director of Brooklyn Academy of Music. Her work is included in numerous public and private collections including the International Collage Center, Bucknell, PA; US Embassy, Kiev, Ukraine; Wellington Art Collection, Boston; Memorial Sloane Kettering, NYC, City of Raleigh Municipal Art Collection, Raleigh, NC; North Carolina Museum of Art, Raleigh NC; MCI Corporation, Raleigh NC; Reynolds Industries, Winston-Salem, NC; Herman Miller, New York, NY; Bellevue Hospital Center, New York, NY; TRW, Cleveland, OH; American Hospital Corporation, Nashville, TN; First Nation Bank, Nashville, TN, among others. She has participated in several artist residencies including Casa de Mateus, Vila Real, Portugal, and Studio Camnitzer, Valdottavo, Italy.

5 / 5
Our team of world-class specialists approve every seller on 1stdibs.
This distinction is for experienced sellers who continually surpass customer expectations.
1stdibs seller since 2015
Typical response time: 3 hours
Located in New York, NY

Nancy Baker, Sweet Dreams Are Made For This, 2017, paper, acrylic paint
Category