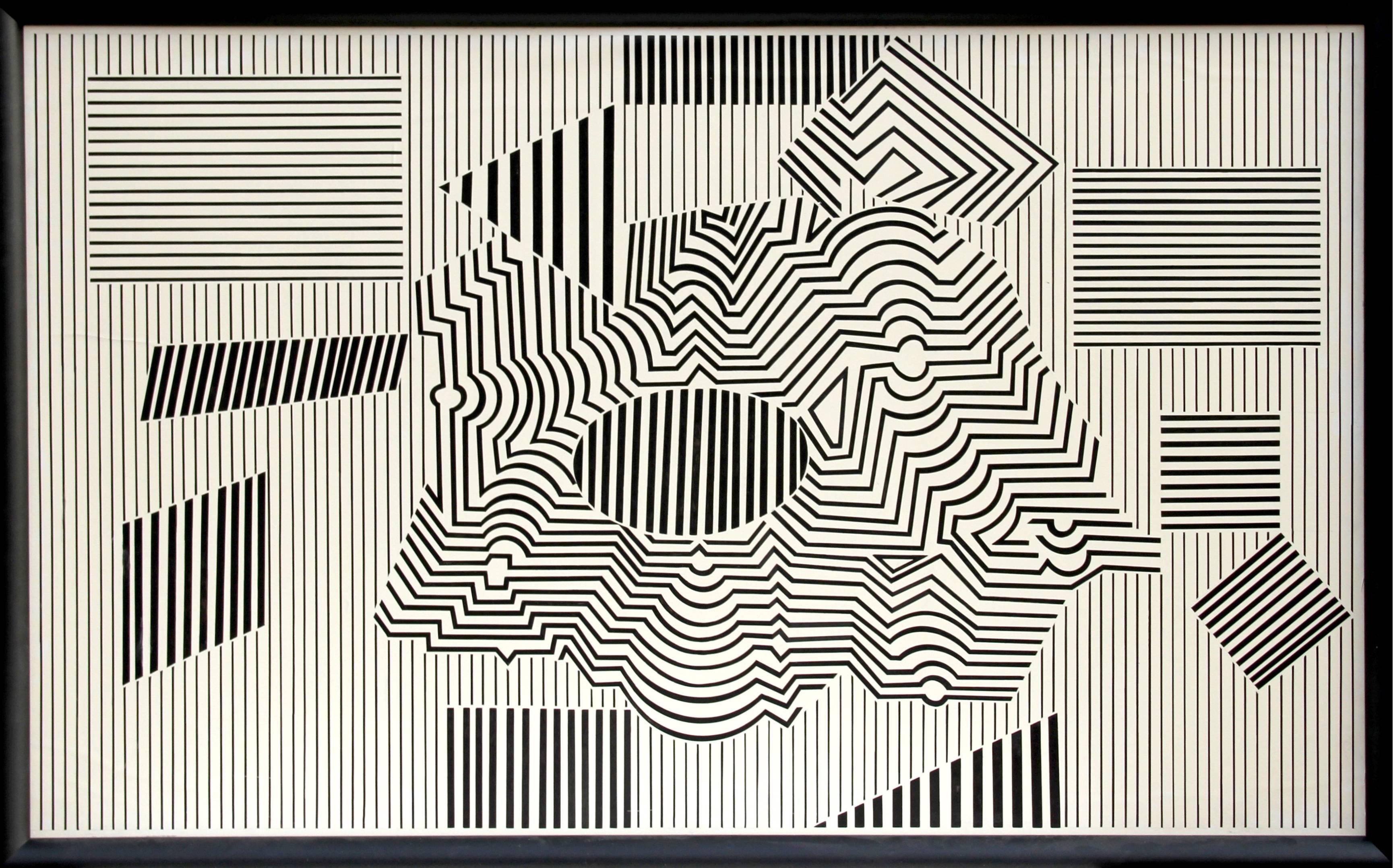 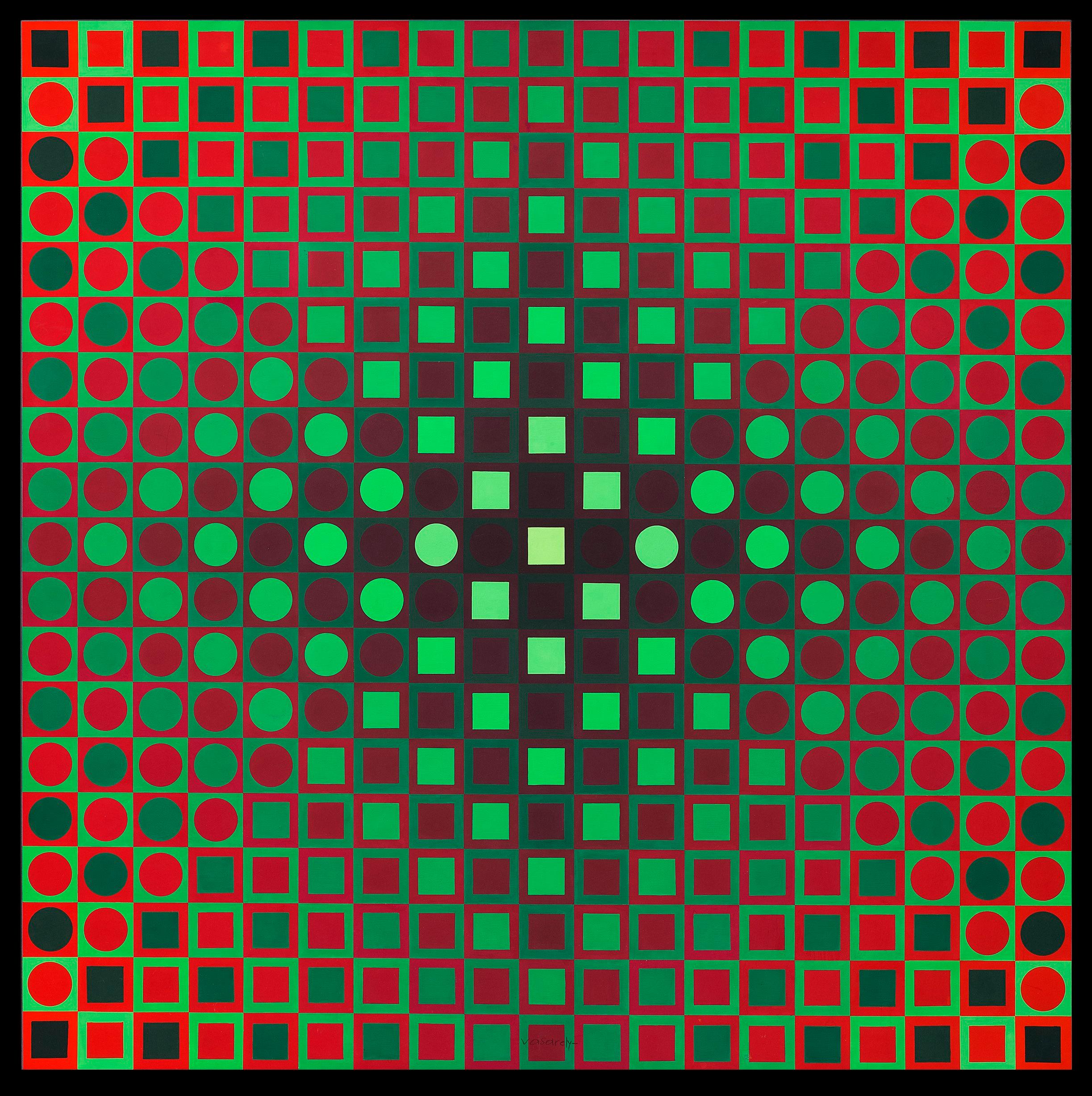 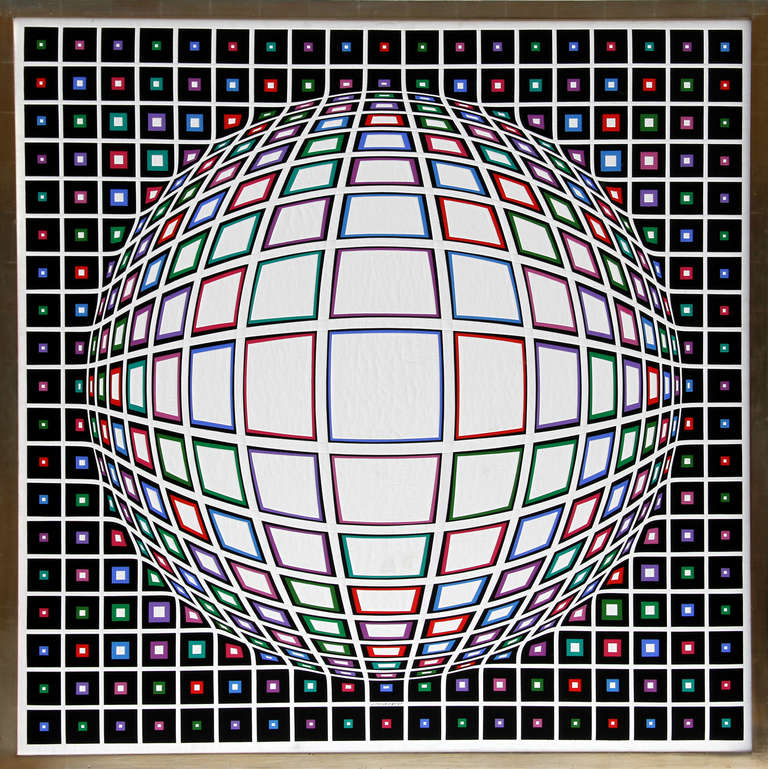 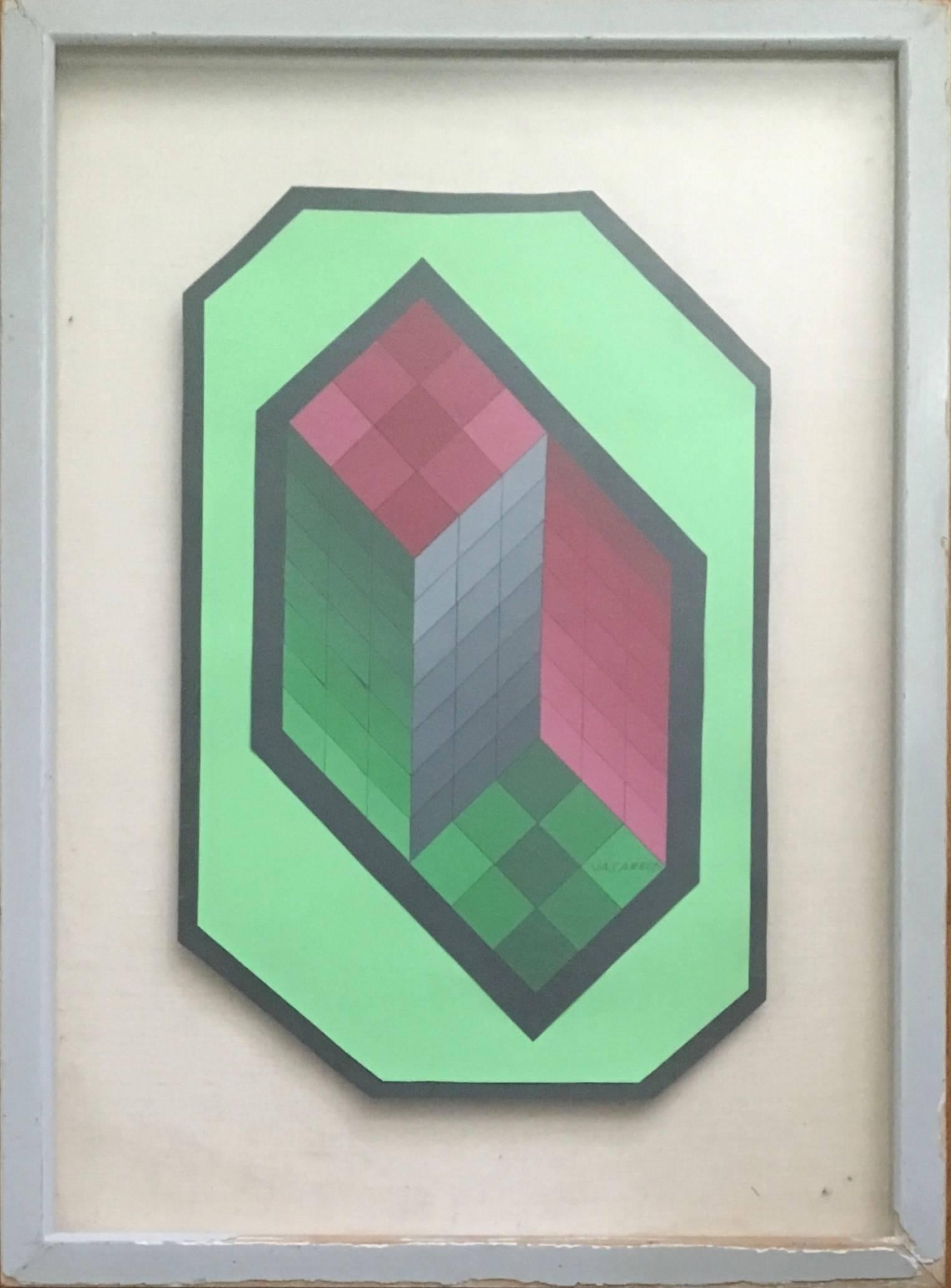 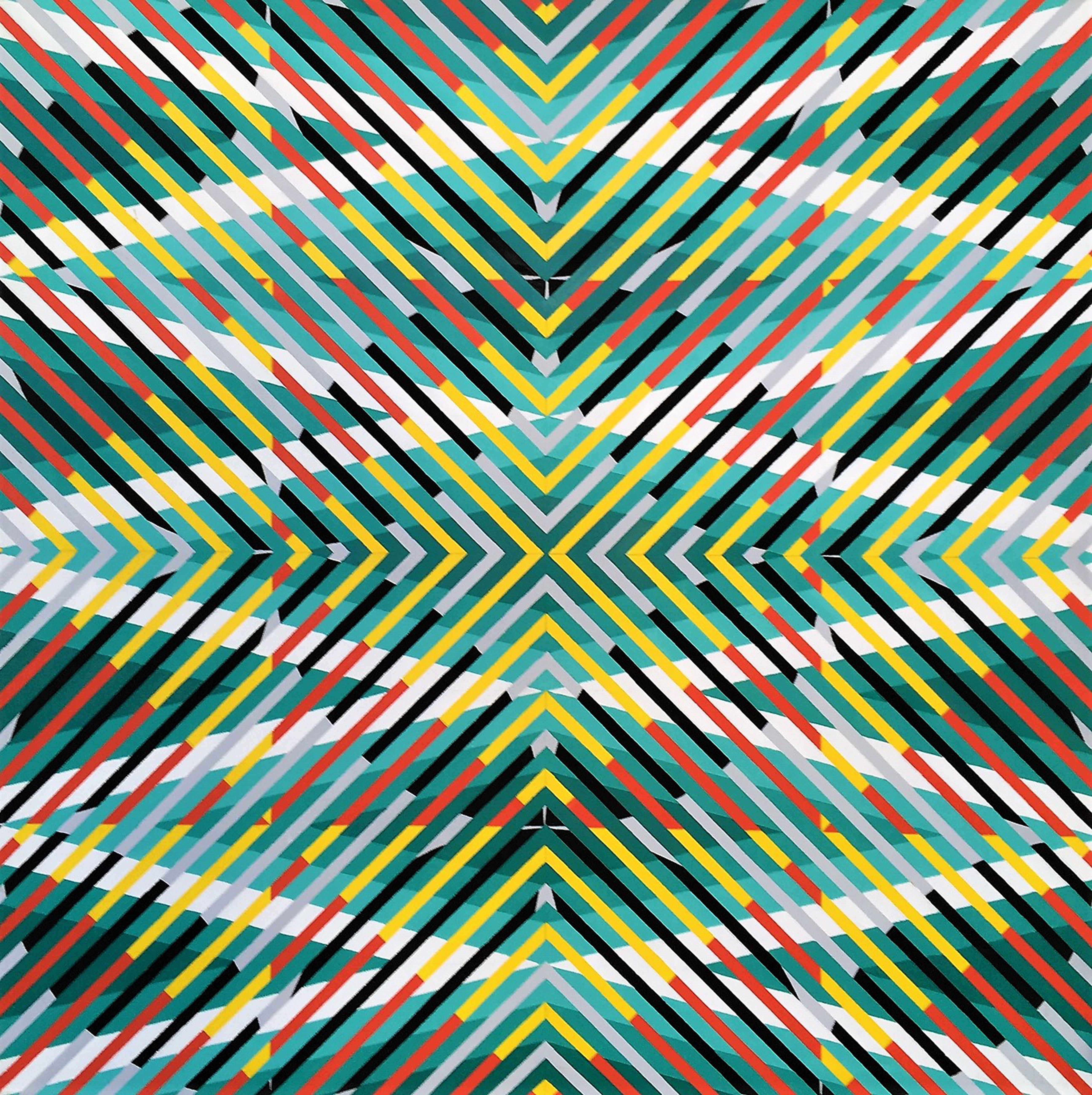 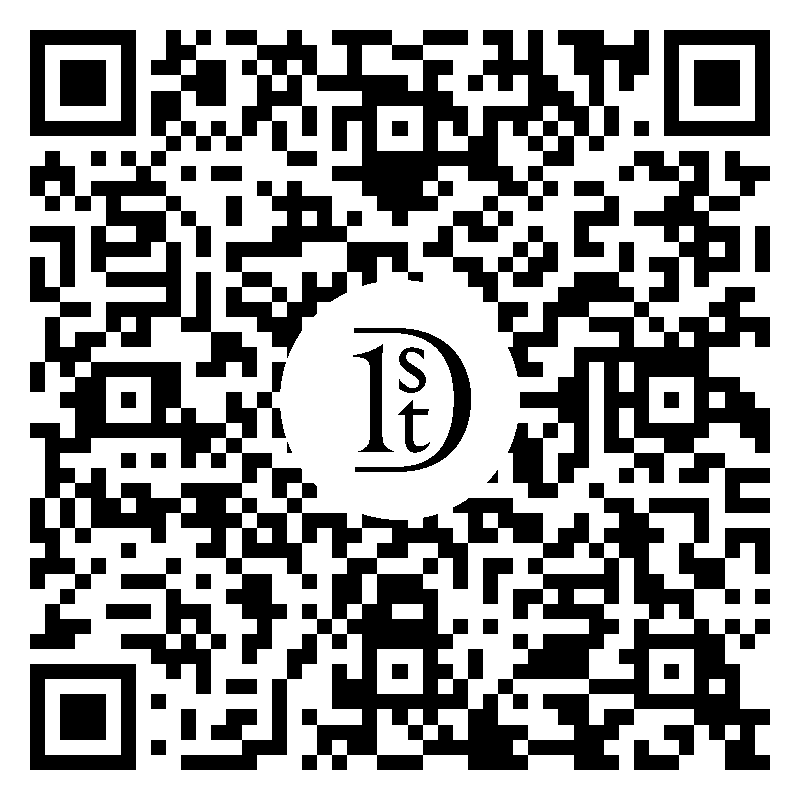 RENG-MC by Victor Vasarely (1906-1997) Acrylic on canvas 111.8 x 58.4 cm (44 x 23 inches) Signed lower center Signed twice, titled and dated 1984 on the reverse Executed in 1984 Provenance Circle Gallery, San Francisco Private collection, USA acquired from the above in 1989 Exhibition Chicago, Circle Gallery, Victor Vasarely: A Retrospective Exhibition - 1940s to Present, Paintings, Collages, Sculpture, Art to Use, Graphic Works, May - June 1989, illustrated in color on the invitation The authenticity of this work was confirmed by Pierre Vasarely and will be included in the forthcoming Catalogue Raisonné de l'Oeuvre Peint de Victor Vasarely. Artist biography Vásárhelyi Győző, or Victor Vasarely as he is better known, was born in Pecs, Hungary. He is regarded as the 'grandfather' of the Op art movement of the early twentieth century, a brief style of painting which concentrated on creating effects of optical illusion. Vasarely first enrolled at Budapest University in 1925 to read medicine, but he abandoned this pursuit after two years to receive instruction in traditional academic painting at the Podolini-Volkmann Academy. In 1928, he moved to the Mulhely Academy, the centre for Bauhaus studies in Budapest, where he studied with Sándor Bortnyik. It is perhaps here that Vasarely first took an interest in the issue of form, an interest which would continue throughout his life. In 1930, Vasarely left Hungary to settle in Paris, where he worked as a graphic artist at various advertising firms in the city. After the Second World War, Vasarely pursued his artistic ambitions and he established an atelier in Arcueil, a suburb of Paris. Following this, he went on to produce artworks in a geometric abstract style, with a minimalist approach to form and colour. Initially, he worked in oils in the techniques of many of the avant-garde art movements of the time, producing compositions in the styles of Cubism, Surrealism, Futurism and Expressionism. His first exhibition of these works took place at the Galerie Denise René, which soon became celebrated as a temple to the new forms of Kinetic and Op art. By 1947, however, Vasarely finally discovered his own idiosyncratic style of abstract art. The artist was significantly influenced by his experience on holiday on Belle Île, off the coast of Brittany. In the ellipsoid shape of pebbles on the beach there, Vasarely discovered what he called an "internal geometry", which could be seen to underlie the surface of the universe. In the mind of the artist, colour and form were indivisible - "Every form is a base for colour, every colour is the attribute of form." This experience characterised Vasarely's oeuvre, and its emphasis on shape, for the rest of his career. In 1954, Kinetic art, represented by artists such as Vasarely, Calder, Duchamp and Soto, blossomed. Many works were showcased by the Galerie Denise René in an exhibition called Le Mouvement. The first museum dedicated to Vasarely opened at the Renaissance palace in Gordes in the south of France, containing five hundred works by the artist. In 1976, a second enterprise, the Foundation Vasarely in Aix-en-Provence, was inaugurated by President Georges Pompidou, housed in a building designed by Vasarely himself. Vasarely died on 15th March 1997, at the age of 90. 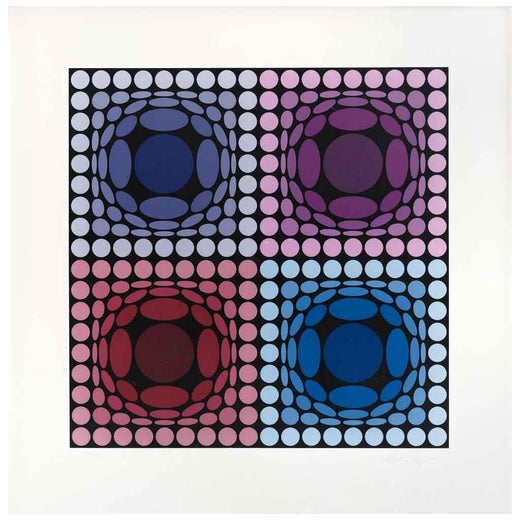 Widely considered the grandfather of Op art, the French-Hungarian painter Victor Vasarely (1906–97) created eye-popping geometric abstractions that play with the viewer’s perception of depth, perspective and motion. A classic example is the 1937 Zebra, which consists of undulating black and white stripes that suggest the form of the titular animal through optical trickery. The work is often credited as the earliest Op art painting. Such illusions were more than pleasing tricks for Vasarely, who insisted that “pure form and pure color can signify the world.” He wanted to “democratize” art by producing works in large editions at reasonable prices that were understandable across national and cultural boundaries. In the 1960s, he developed an alphabet plastique, or fine art alphabet, consisting of elementary visual building blocks that could be used in endless combinations to create original compositions. By employing this universal visual vocabulary and stripping away topical references, he sought to create what he called a “Planetary Folklore.” Embodying Vasarely’s singular belief that art should serve a social function, accessible to all, these innovations may perhaps be his greatest contribution to 20th-century art. Browse Victor Vasarely's silkscreen prints, paintings, sculptures and more at 1stDibs.
About the Seller
5 / 5
Located in London, United Kingdom
Recognized Seller
These prestigious sellers are industry leaders and represent the highest echelon for item quality and design.
Established in 1964
1stDibs seller since 2015
49 sales on 1stDibs
Typical response time: 6 hours
Associations
Society Of London Art Dealers
More From This Seller