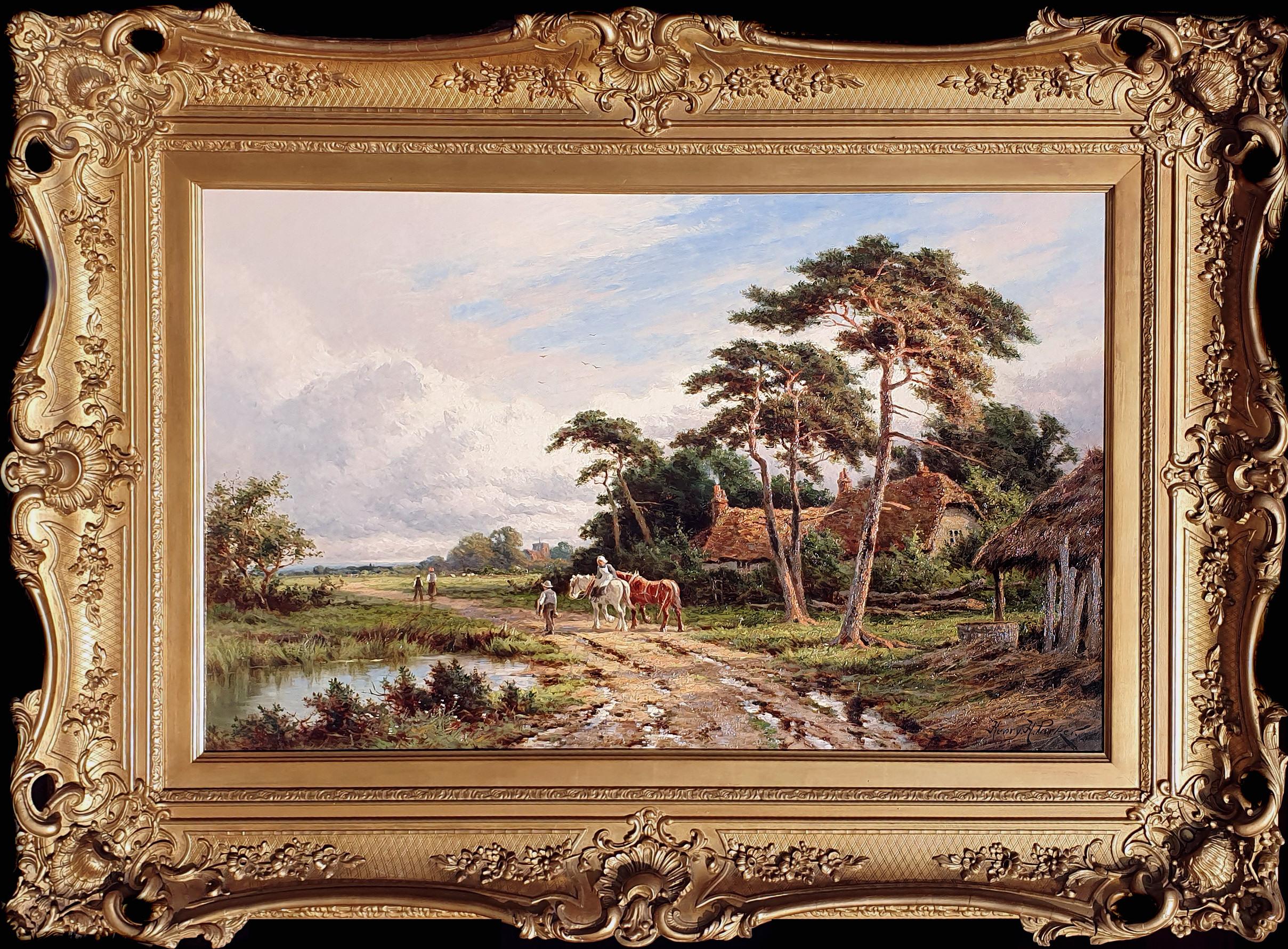 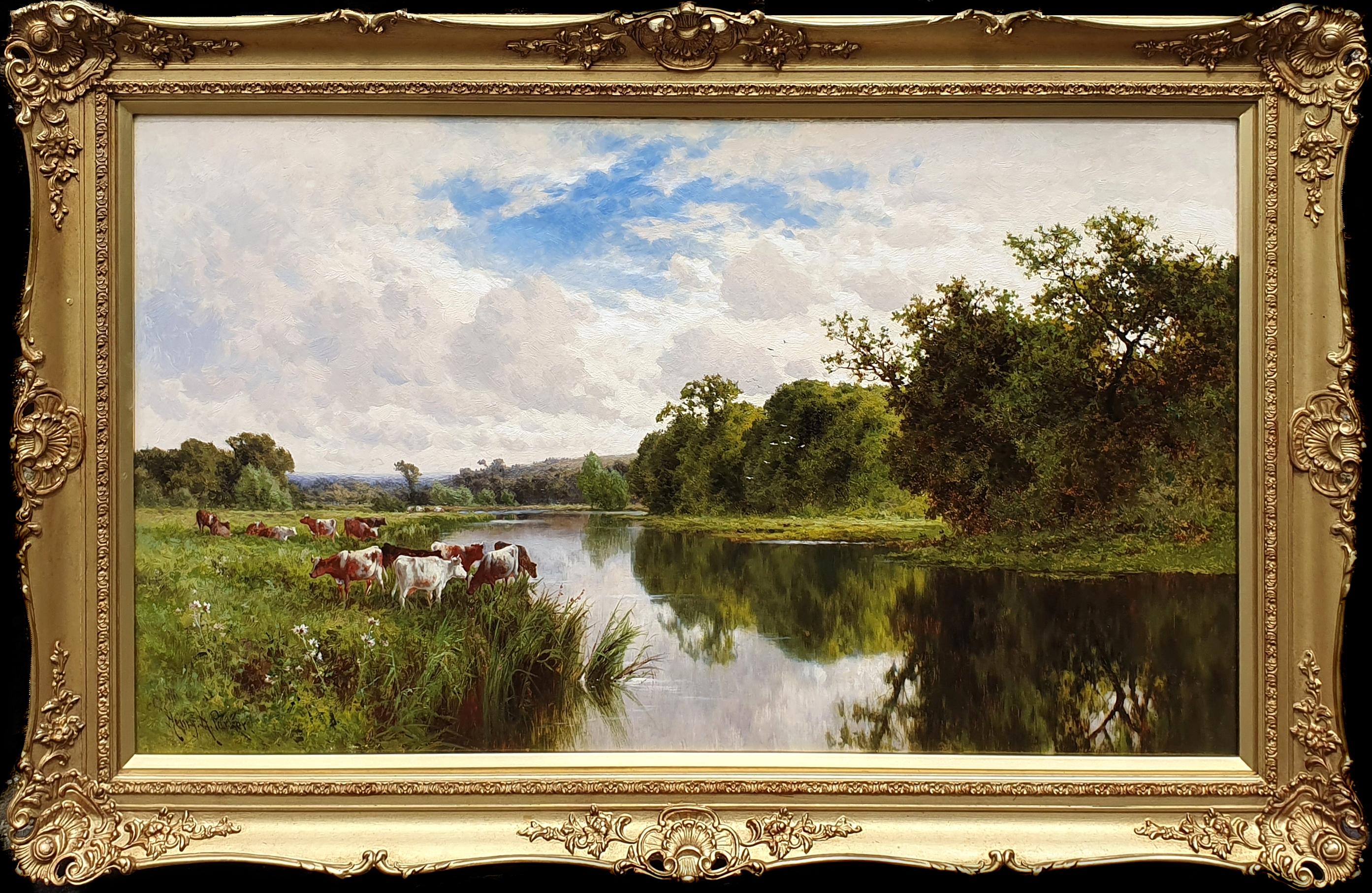 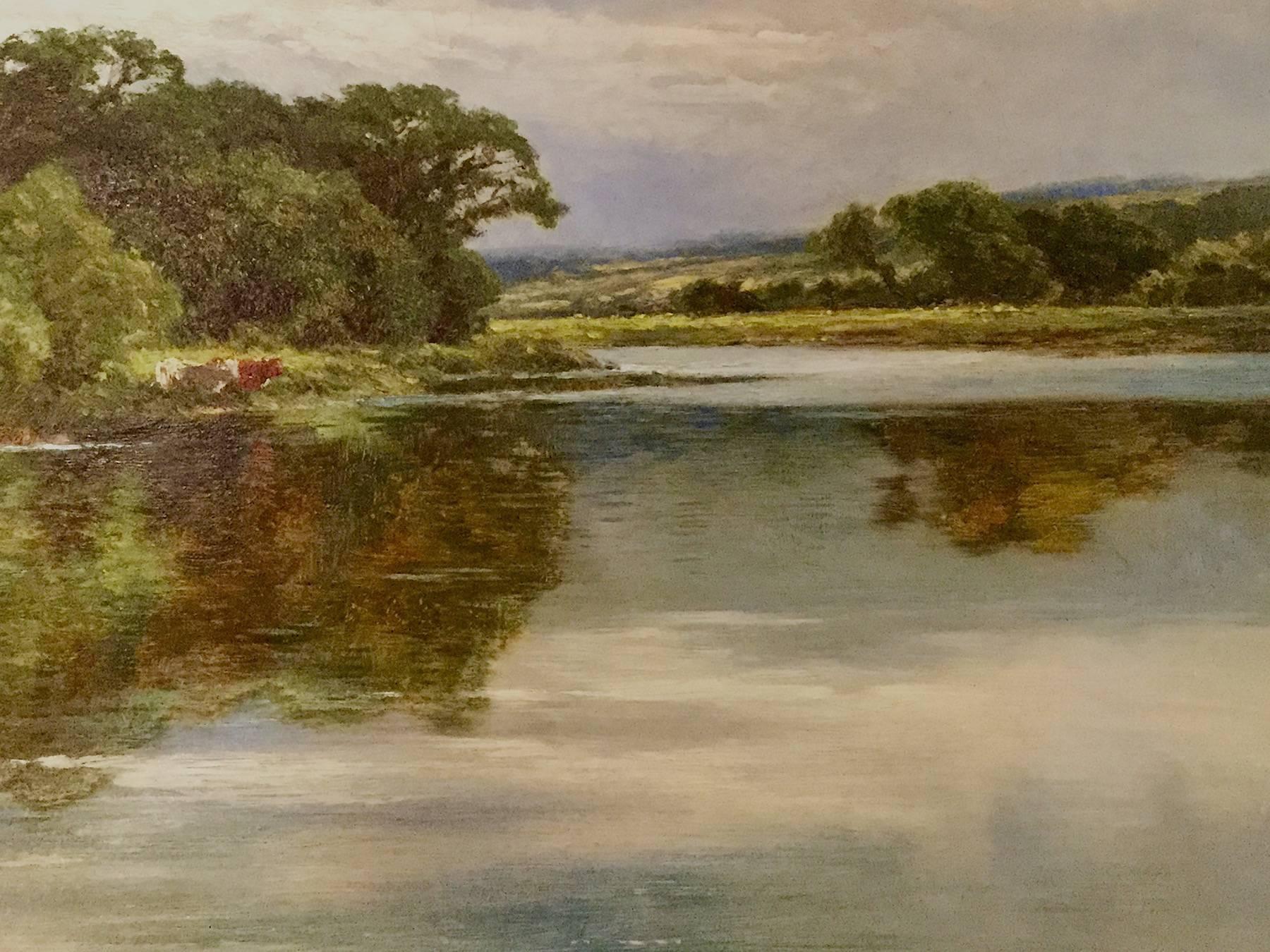 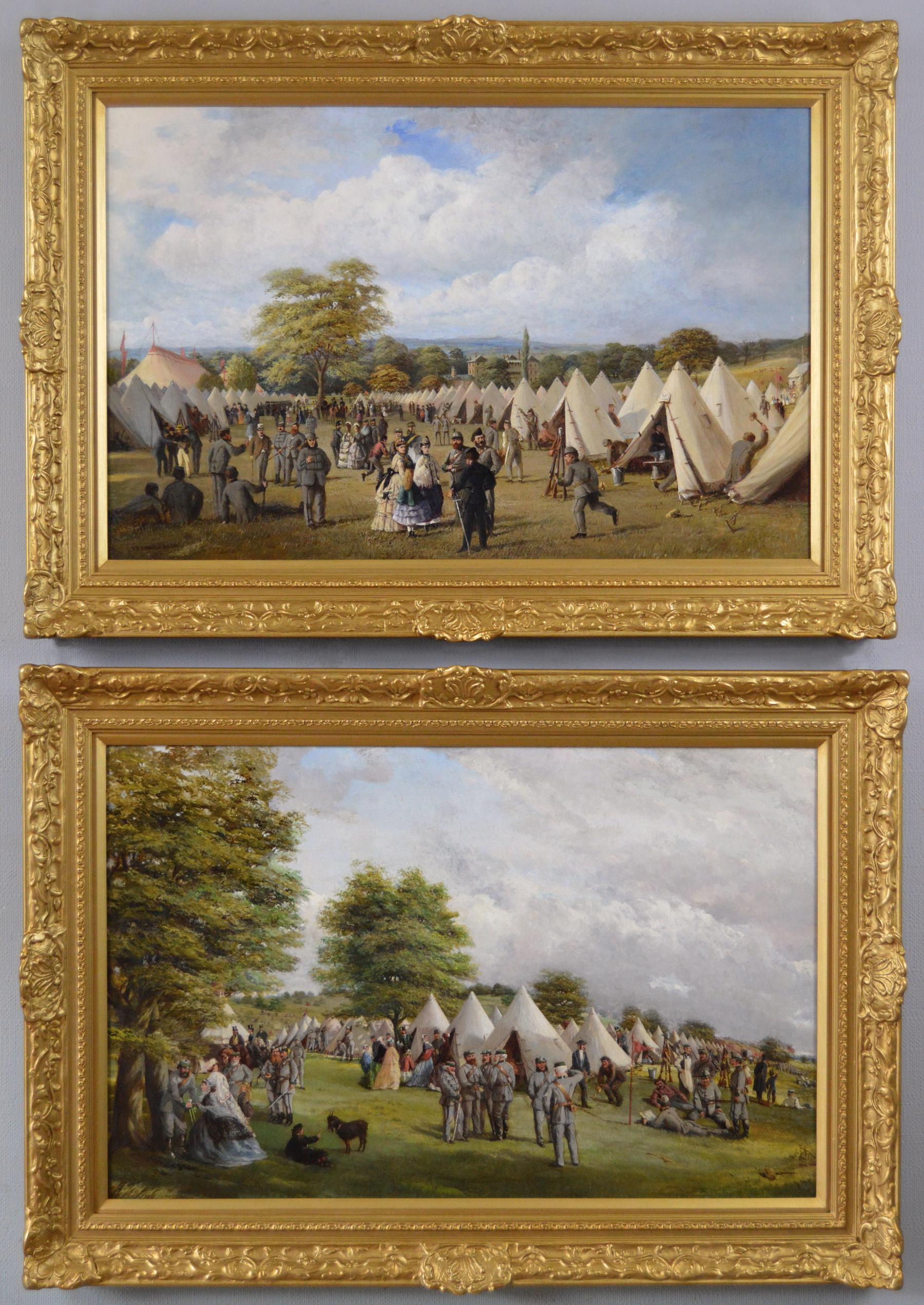 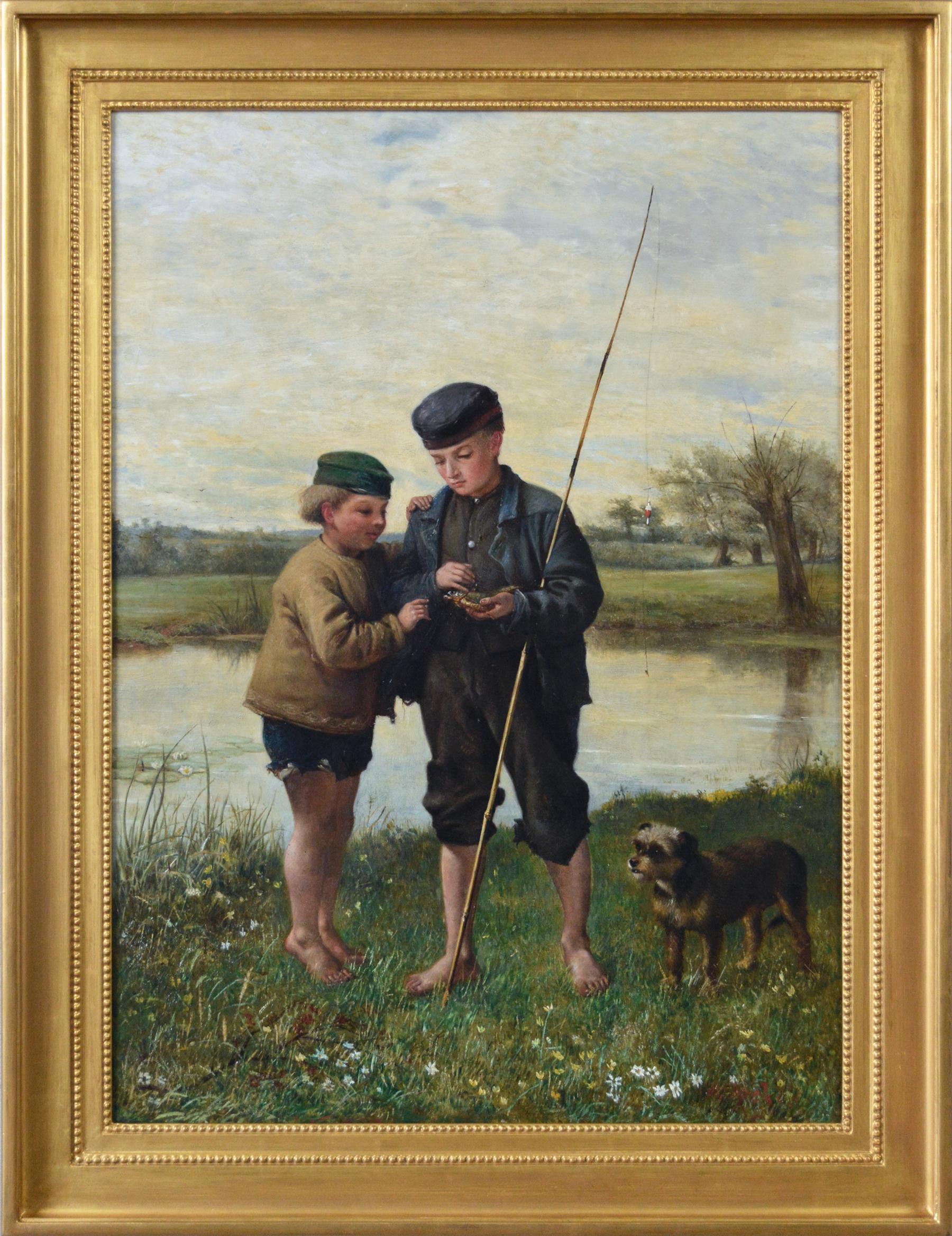 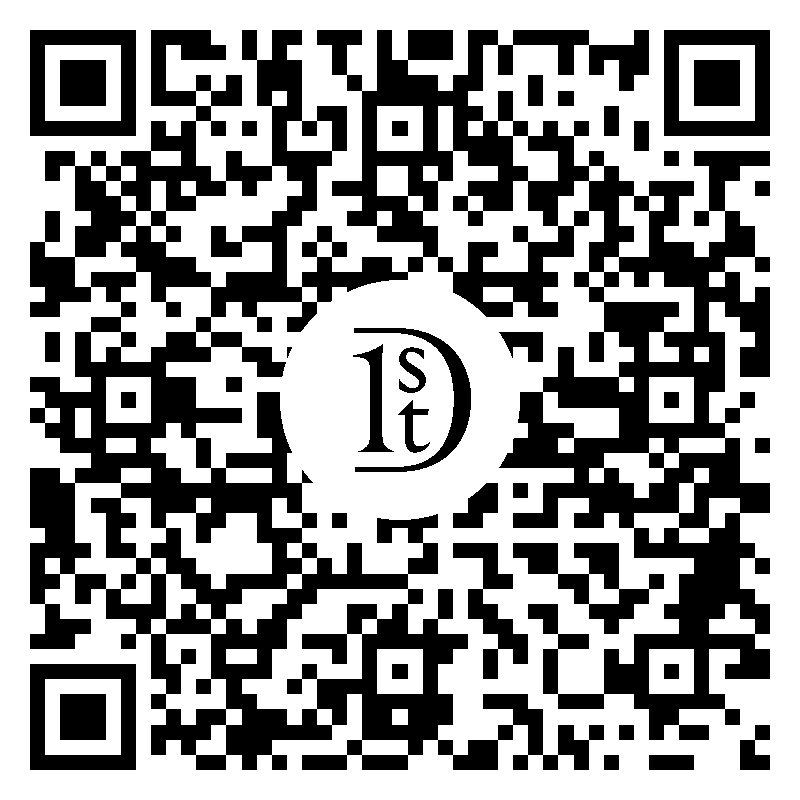 Henry H Parker was one of England's best-known landscape painters from the end of the 19th century onwards. His work was always full of texture, great brush strokes, and atmospheric scenes. This is a very fine example of his work. Fully inscribed on the reverse 'on the River Mole Near Dorking Surrey' this would have been an area that he painted many times. A Parker landscape was one of the very first paintings I purchased as a young and naive art dealer back in 1986, aged 19. I found the piece in a local saleroom and thought it was stunning and just like in this example it had all the skill he was so famous for. I sold that piece to a collector and was forever smitten by the work of Henry H Parker. This is a great reminder of just how good a painter he was. The piece is framed in a vintage English frame and the painting is in original condition, having no restoration. 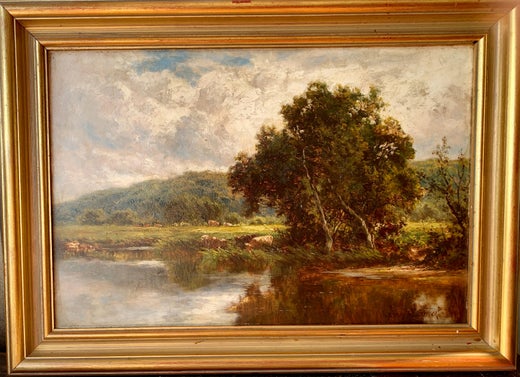 Born in 1858, Henry H. Parker was a British artist working at the end of the Victorian era. It is believed that he was born and lived in London, where he studied at Saint Martin's School of Art. Parker started his working life as an illustrator for the Illustrated London News, and by the age of 23 had become known as a landscape painter.

Parker's landscapes are lush and tranquil, frequently featuring a lone figure in a boat or walking down a country path. The scenes are often sunny and bright and the waters are calm and soothing.

Parker's style shows a great influence by the Impressionists, through his use of bright colors and quick brush strokes, but a definite understanding of the academic principles is also displayed. This style of painting was very typical for the late Victorian landscape artists who strove to incorporate the new Impressionist techniques in their more traditional paintings. Parker's landscapes and skies were created with a free but controlled application of paint, while the watery areas of his work were handled in the more traditional way — using glazes to create depth and reflections. His paintings are well composed, beautifully balanced and capture the landscape in its most pure and natural state. This colorful and free look was a welcome relief to the traditional Victorian landscapes of the previous decades and this, coupled with Parker's choice of subject matter, brought him great success.

Parker painted mainly in the South East of England, in Surrey, Sussex, and along the Thames where he frequently stayed at Goring and Streatley. He also painted in the Worcestershire area and in Wales. He would often sign and title his works, with their exact location, on the reverse.

Throughout his life, Parker enjoyed widespread popularity as an artist, and this is today witnessed by the number of his works consigned to galleries and museums throughout the world. From 1923 onward, Parker exhibited in the United States, especially in Chicago, where he was unable to meet the demand for his pictures. His paintings were also popular with the Canadians and were hung in all the leading clubs throughout Canada and the States.

Of final note, it is very interesting that Parker was one of only a handful of artists, of his caliber, to never exhibit at the major exhibition halls in England during his lifetime and whose popularity has increased over the years. Parker's works can be found in the following museums and galleries: Birmingham, Liverpool, Eastbourne, Hartlepool, Bradford (England); the Manitoba Club, Winnipeg, St James's, Montreal (Canada); and the Auckland Museum (New Zealand).

About the Seller
5.0
Located in Woodbury, CT
Platinum Seller
These expertly vetted sellers are 1stDibs' most experienced sellers and are rated highest by our customers.
Established in 1983
1stDibs seller since 2016
254 sales on 1stDibs
Typical response time: 1 hour
More From This Seller

Beneath The Slopes of Ben Venue
By Henry H. Parker
Located in Wiscasett, ME
Oil on canvas, signed lower right and signed and inscribed reverse. This work is signed with one of the artist's pseudonyms (Hillier). Provenance: The Cooling Galleries, London Mea...
Category

Richard Hayes
"Near Brodick, the Isle of Arran", figurative landscape, original oil on canvas , Circa 1895