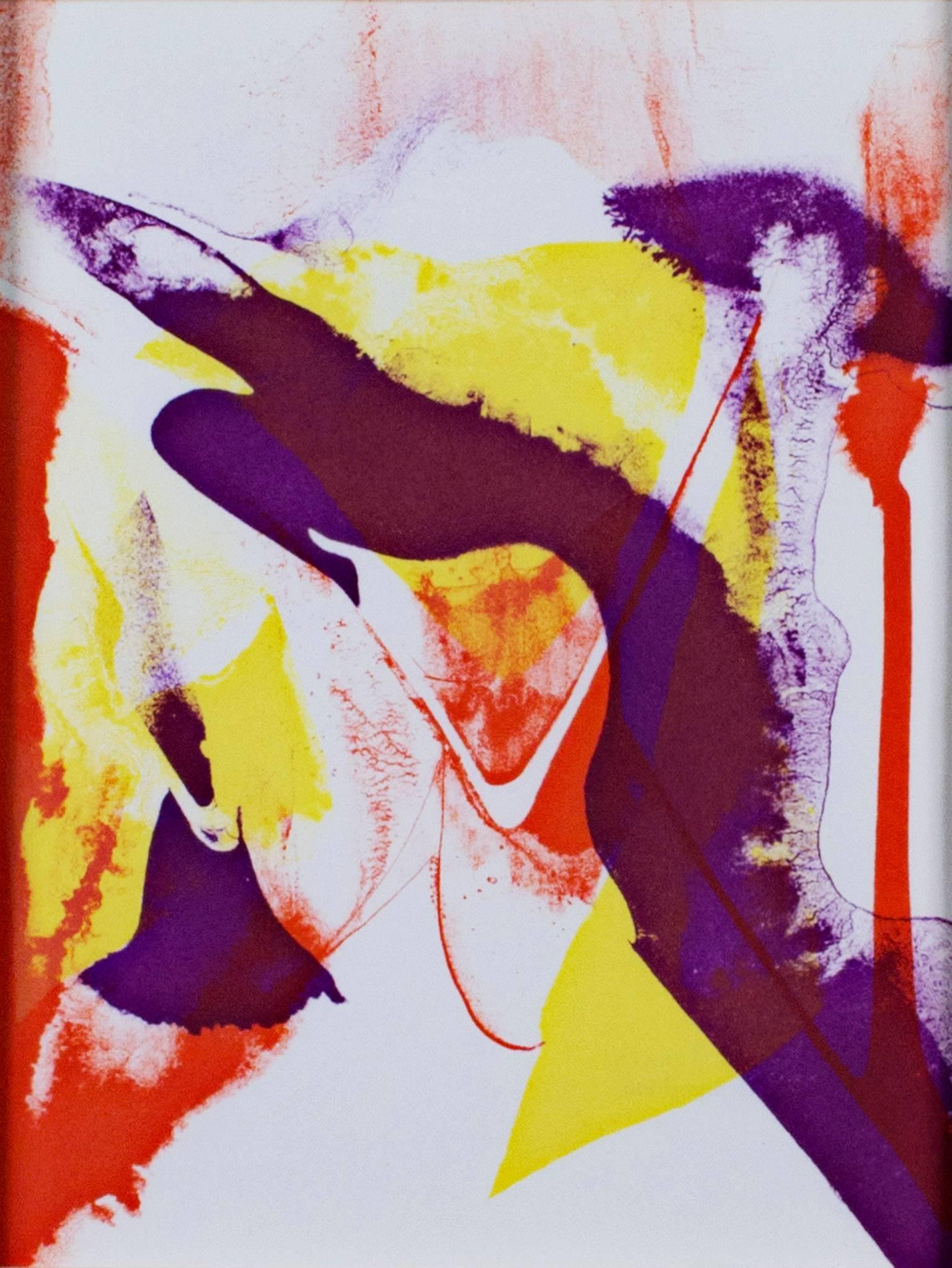 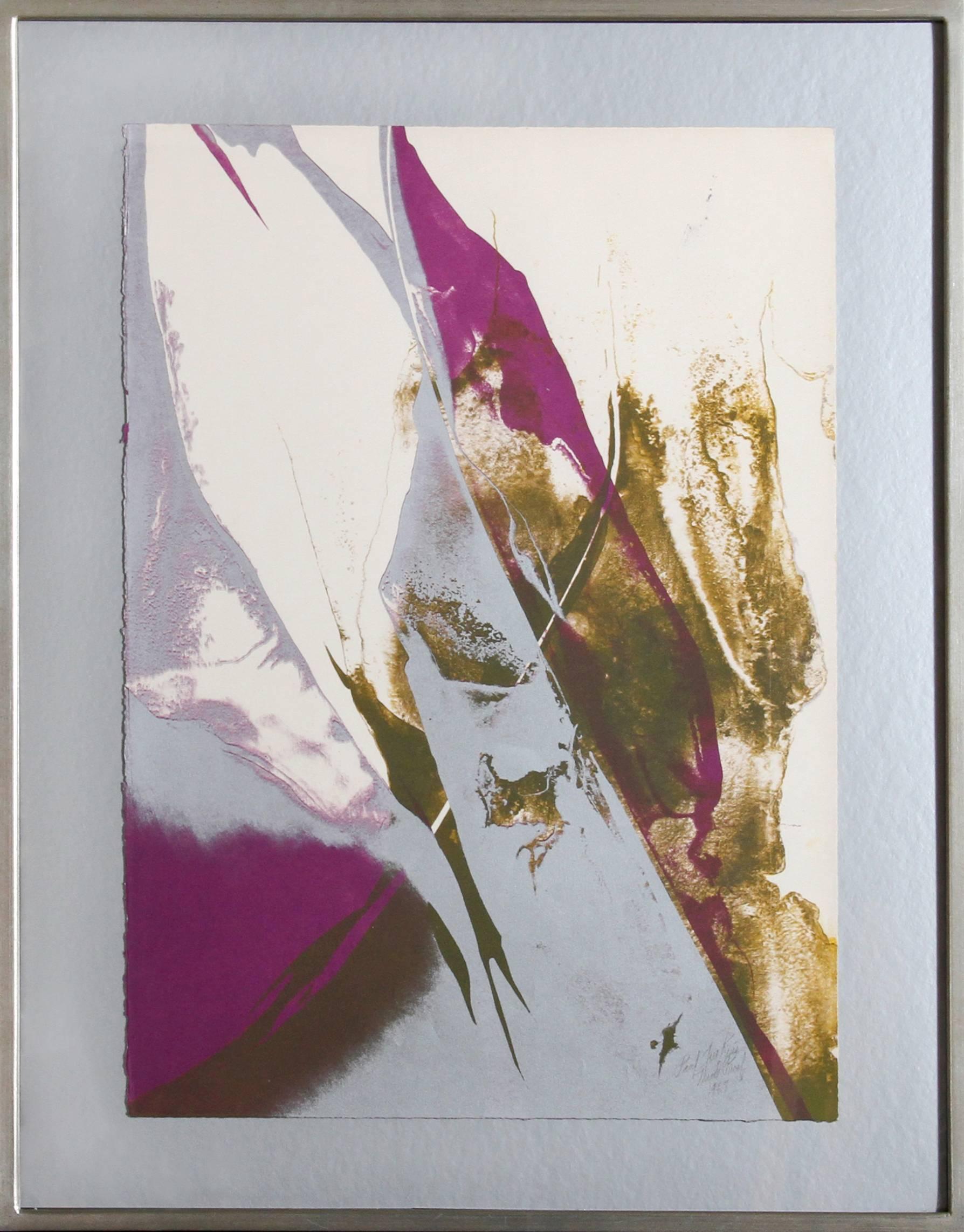 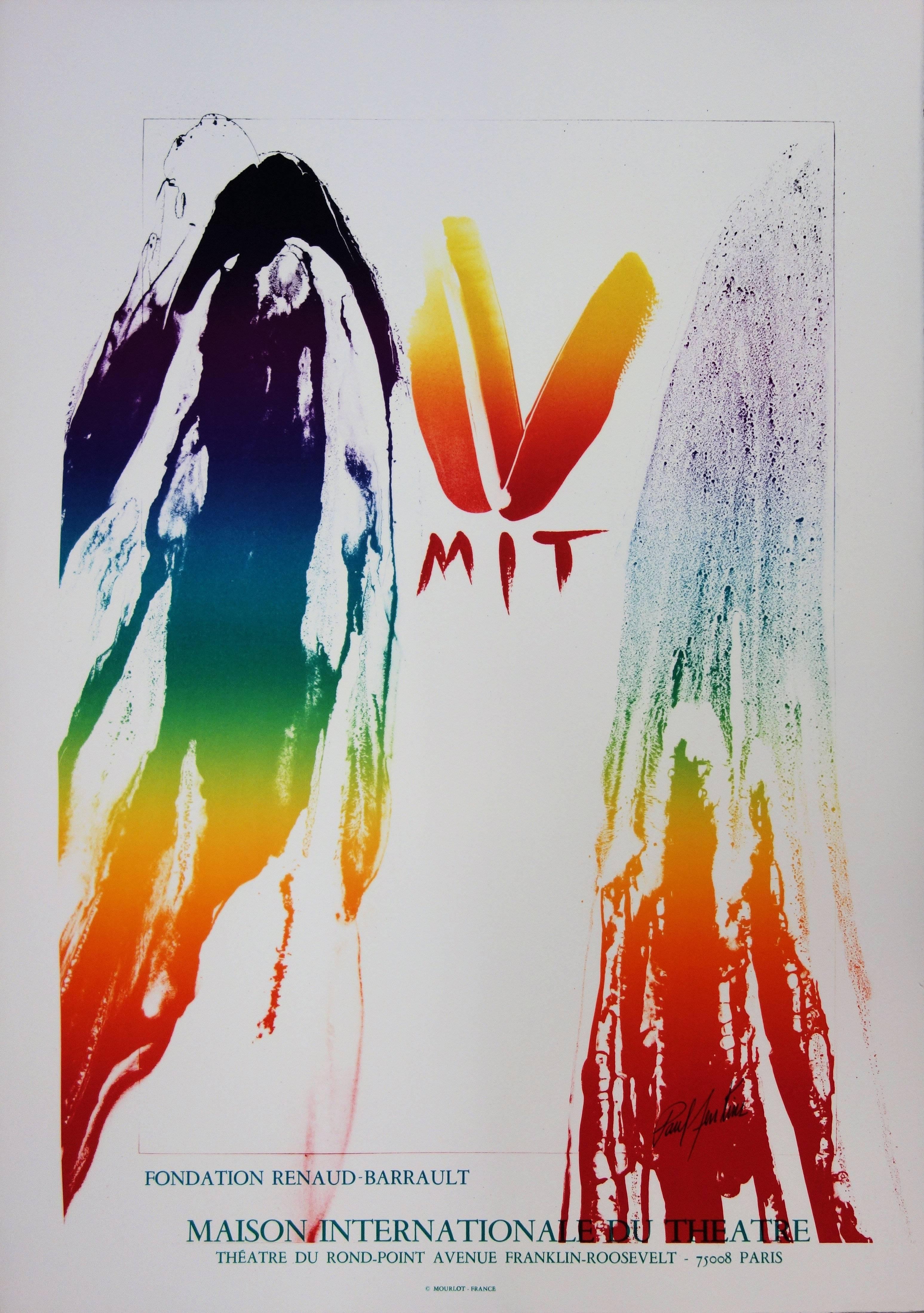 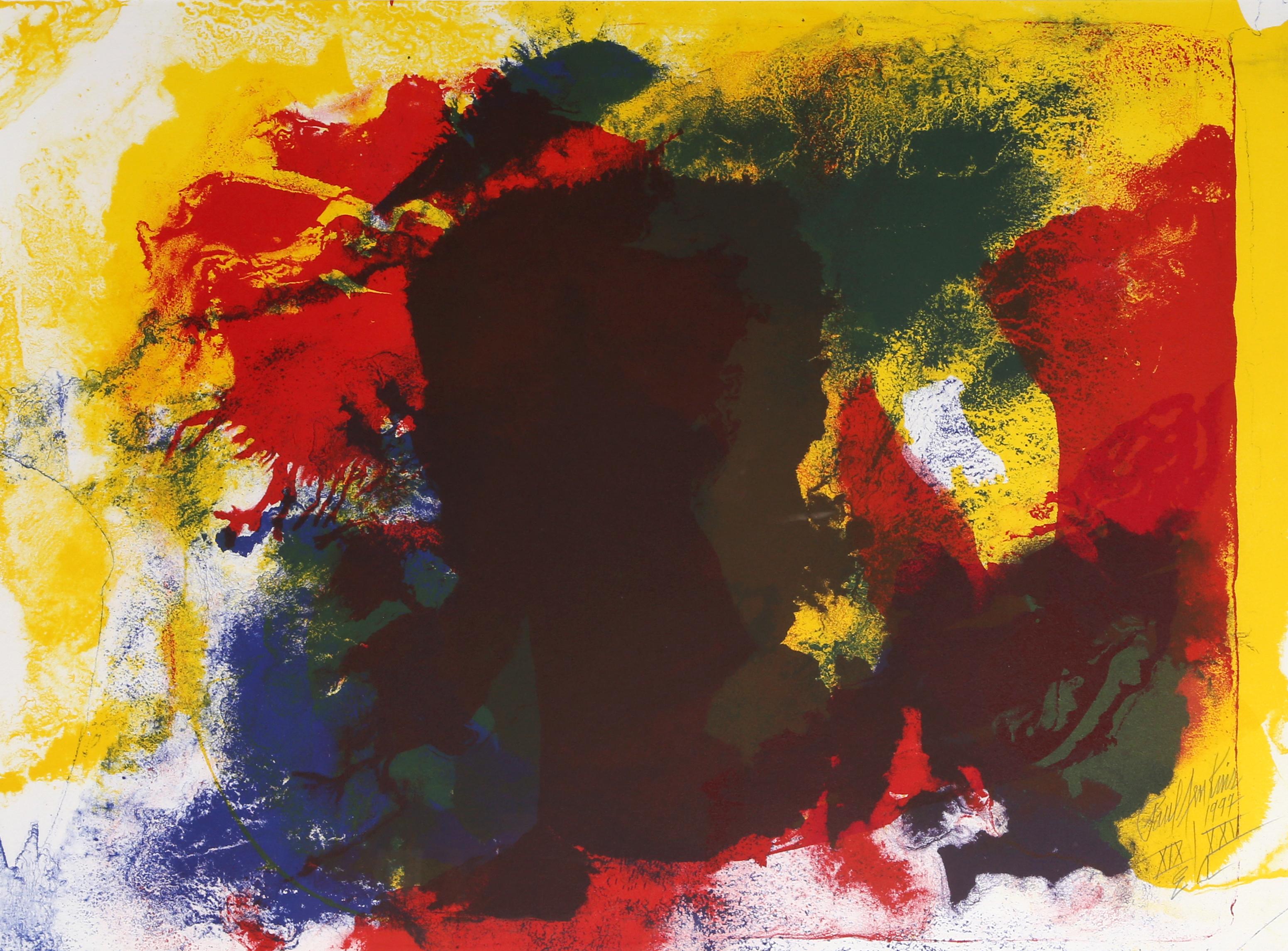 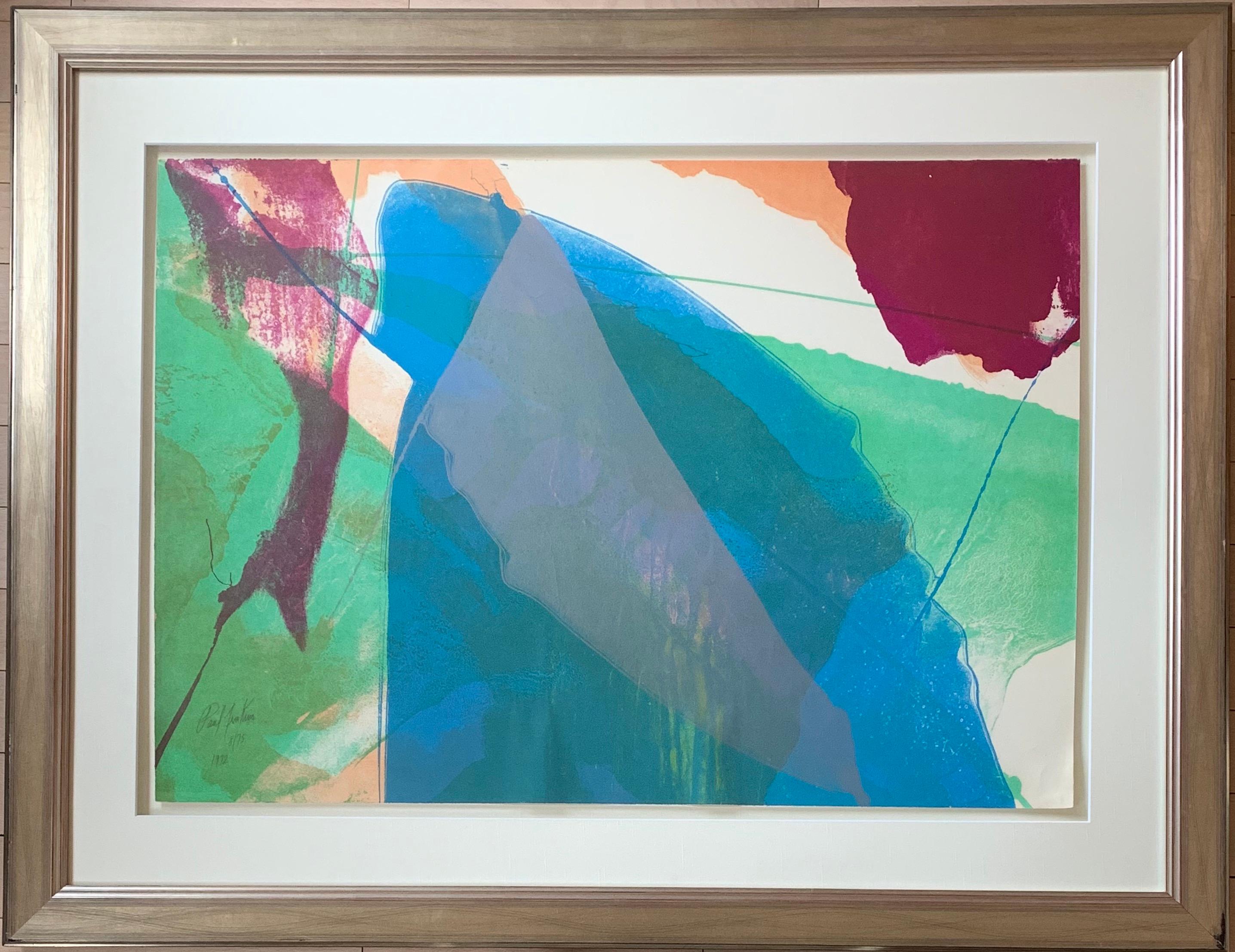 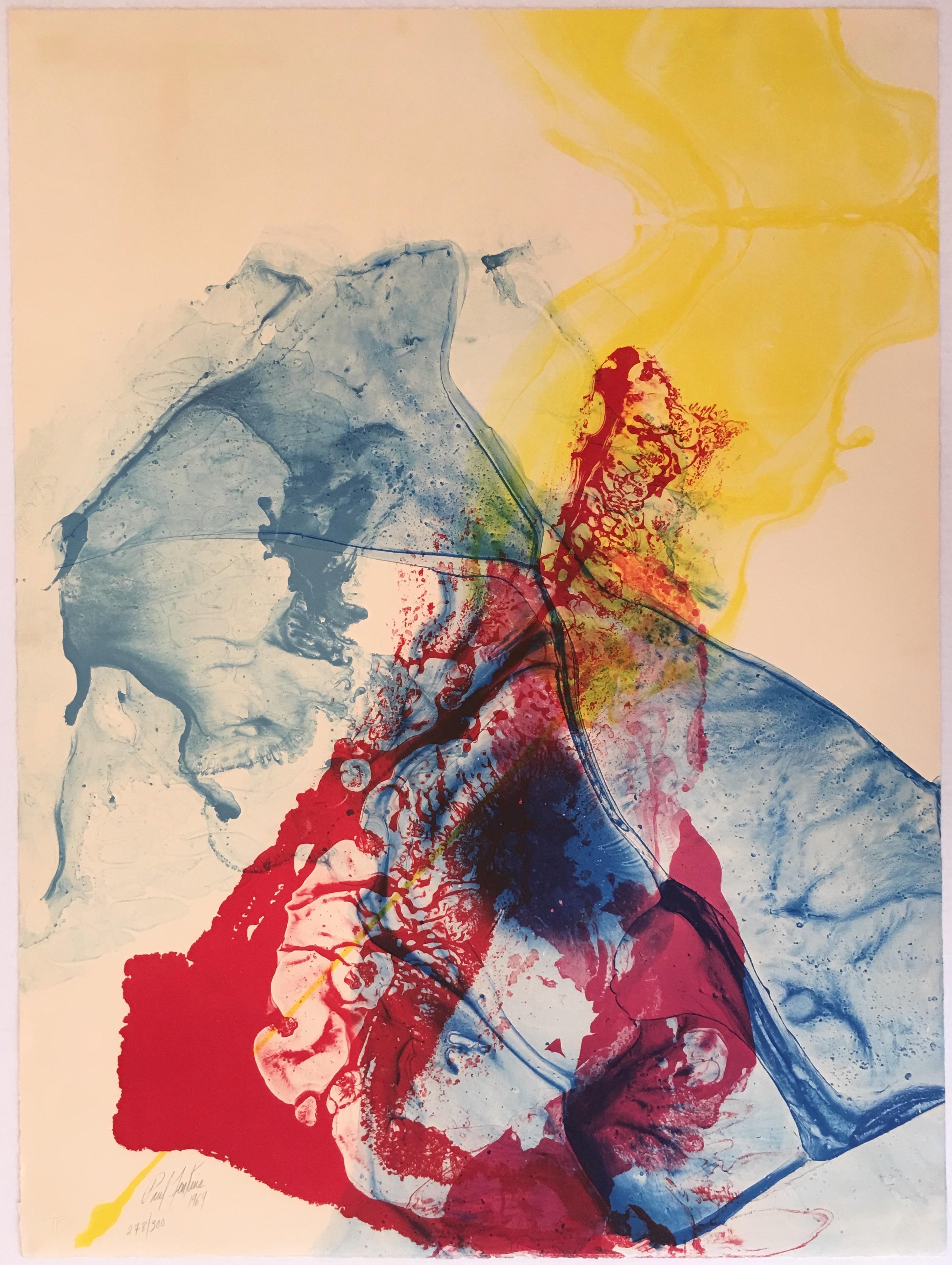 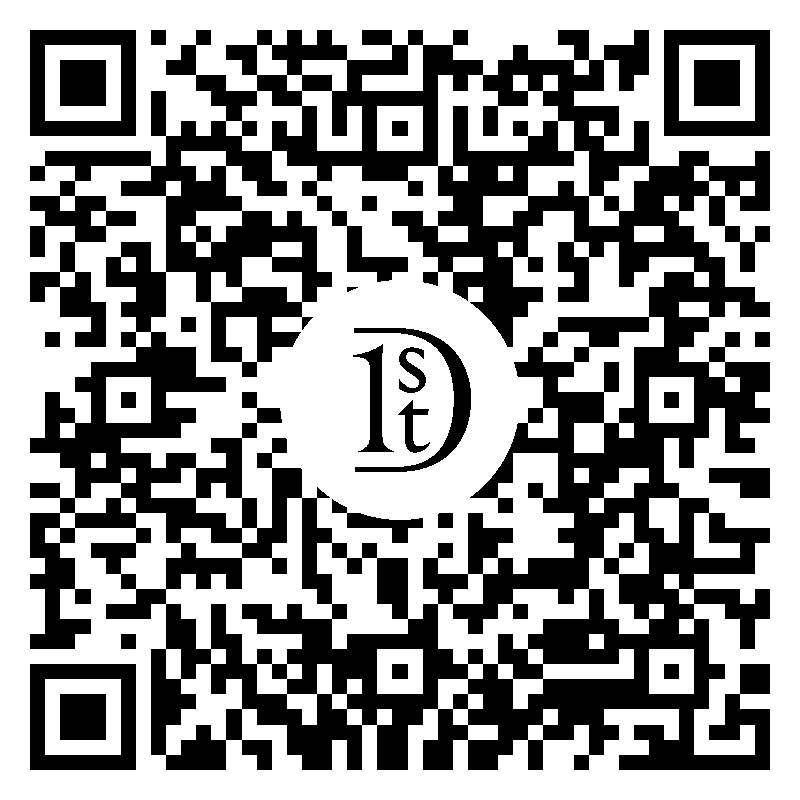 Paul Jenkins - Composition - Original Lithograph 1964 Dimensions: 30 x 20 cm Edition of 200 (one of the 200 on Vélin de Rives) Mourlot Press, 1964 Paul Jenkins, American (1923 - 2012) Paul Jenkins, an artist originally associated with abstract expressionism, exhibits in his mature works a redefining of color, light and space on the canvas surface. Born in Kansas City, Missouri in 1923, Jenkins worked as a teenager in a ceramics factory, where he was first exposed to color intensity and the creation of form. From age 14 to 18, he studied drawing and painting at the city's Art Institute. Initially interested in drama, Jenkins received a fellowship to the Cleveland Playhouse, then continued his dramatic studies in Pittsburgh at the Drama School of the Carnegie Institute of Technology. Deciding to become an artist, Jenkins moved to New York City in 1948 and studied at the Art Students League. During Jenkins's three years at the League, Yasuo Kuniyoshi and Morris Kantor were his influential instructors. While Jenkins continued to live and paint in New York City, his personal explorations took a metaphysical turn, which would ultimately become dominant in his work. P.D. Ouspensky's The Search of the Miracu/ous changed the artist's thoughts on human growth and limitations, while the Chinese I Ching, through its thematic emphasis on constant change, heightened his interest in flowing paint on canvas. Painting for Jenkins became an intuitive, almost mystical process. He commented, "I paint what God is to me." In 1953, Jenkins traveled to Paris, where, a year later, he had his first one-man show. While working at the American Artists Center, he continued to experiment with flowing paints, pouring pigment in streams of various thicknesses, with white thin spills as linear overlays. Jenkins's intent was to deny stasis and create a literal and metaphysical sense of dynamism, while maintaining a sense of unity. Beginning in 1958, Jenkins titled each canvas Phenomena, with additional identifying words. He believed the work to be descriptive of the discovery process inherent in each painting. Paralleling his beliefs, the artist's paintings have undergone subtle but definite changes. Beginning in the early 1 960s, a shift of color saturation and exposure of the white areas gave Jenkins's canvases an enhanced feeling of illumination. If Jenkins's technique is unorthodox, he is in many other ways a traditional artist. He works in an acrylic medium on traditional linen canvas or fine rag paper. Often he uses an ivory knife or a brush for finishing, but never allows a stroke to show. 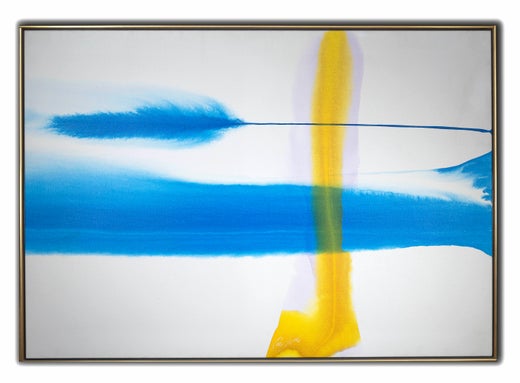 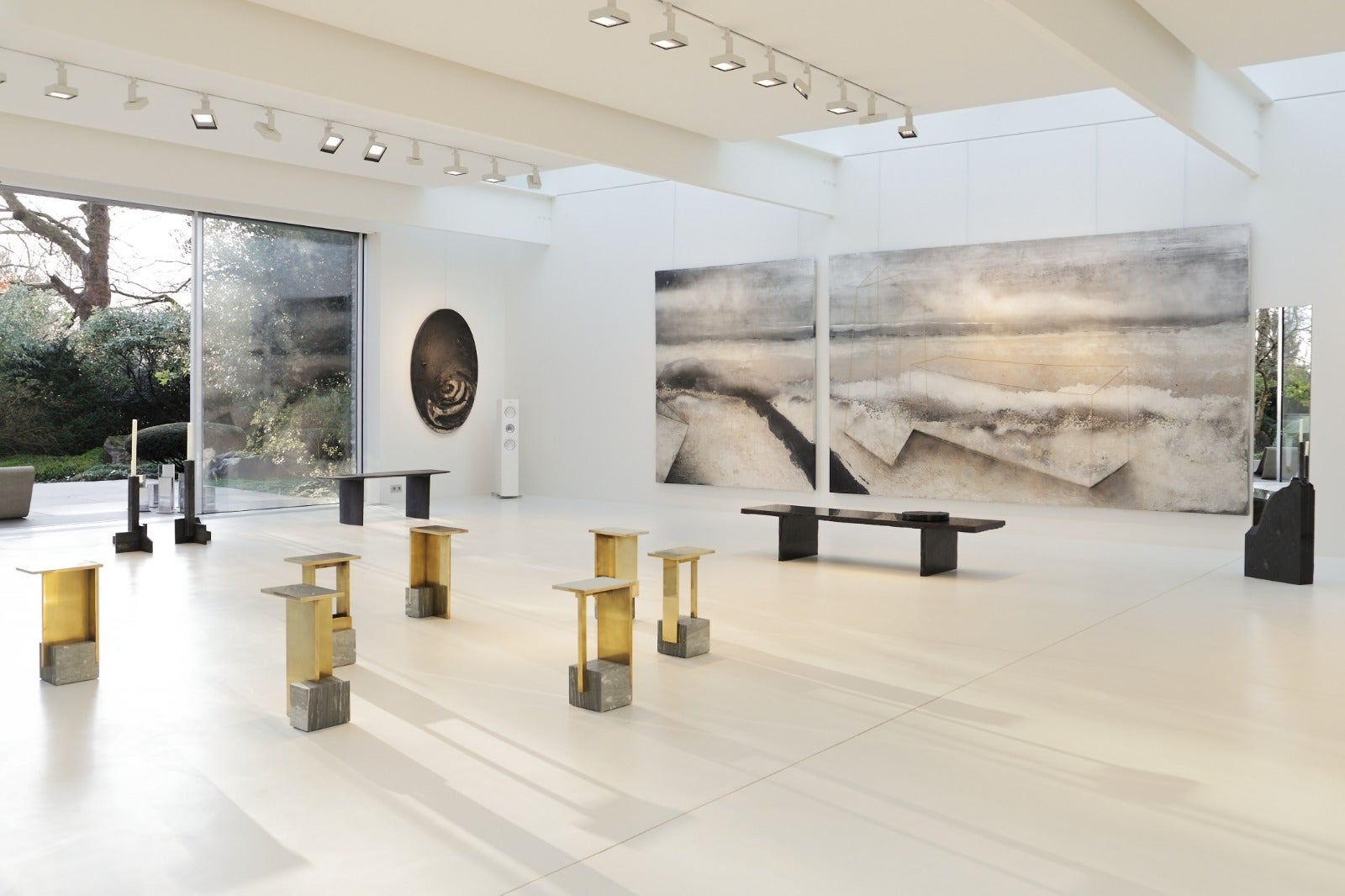 About the Seller
4.9 / 5
Located in Collonge Bellerive, Geneve, Switzerland
Platinum Seller
These expertly vetted sellers are 1stDibs' most experienced sellers and are rated highest by our customers.
1stDibs seller since 2015
724 sales on 1stDibs
Typical response time: <1 hour
More From This Seller

$2,500
Abstract Lithograph, 1967 by Paul Jenkins
By Paul Jenkins
Located in Long Island City, NY
This lithograph was created by Abstract Expressionist Paul Jenkins. Employing an unorthodox approach to paint application, Jenkins is as much identified with the process of controll...
Category