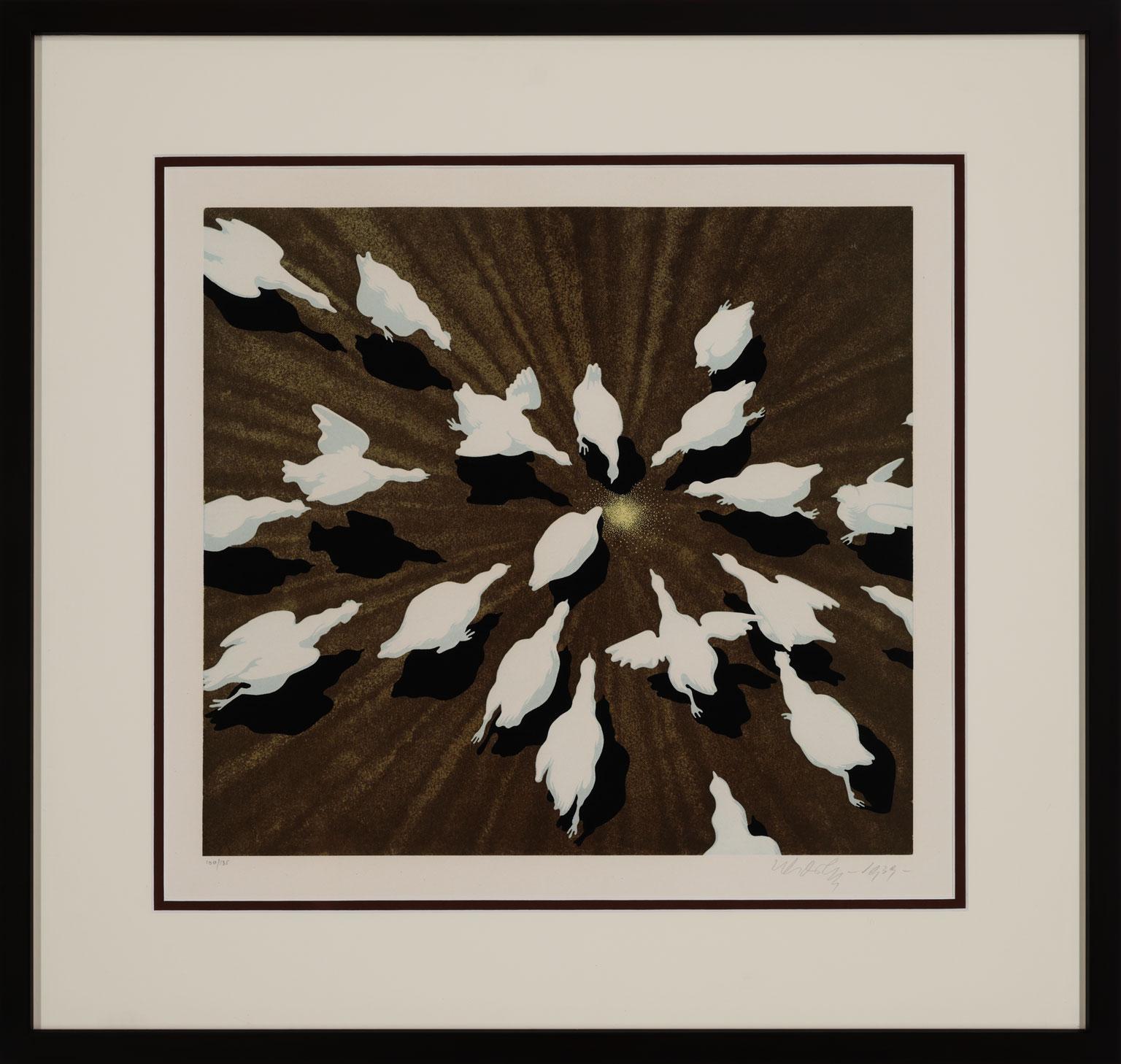 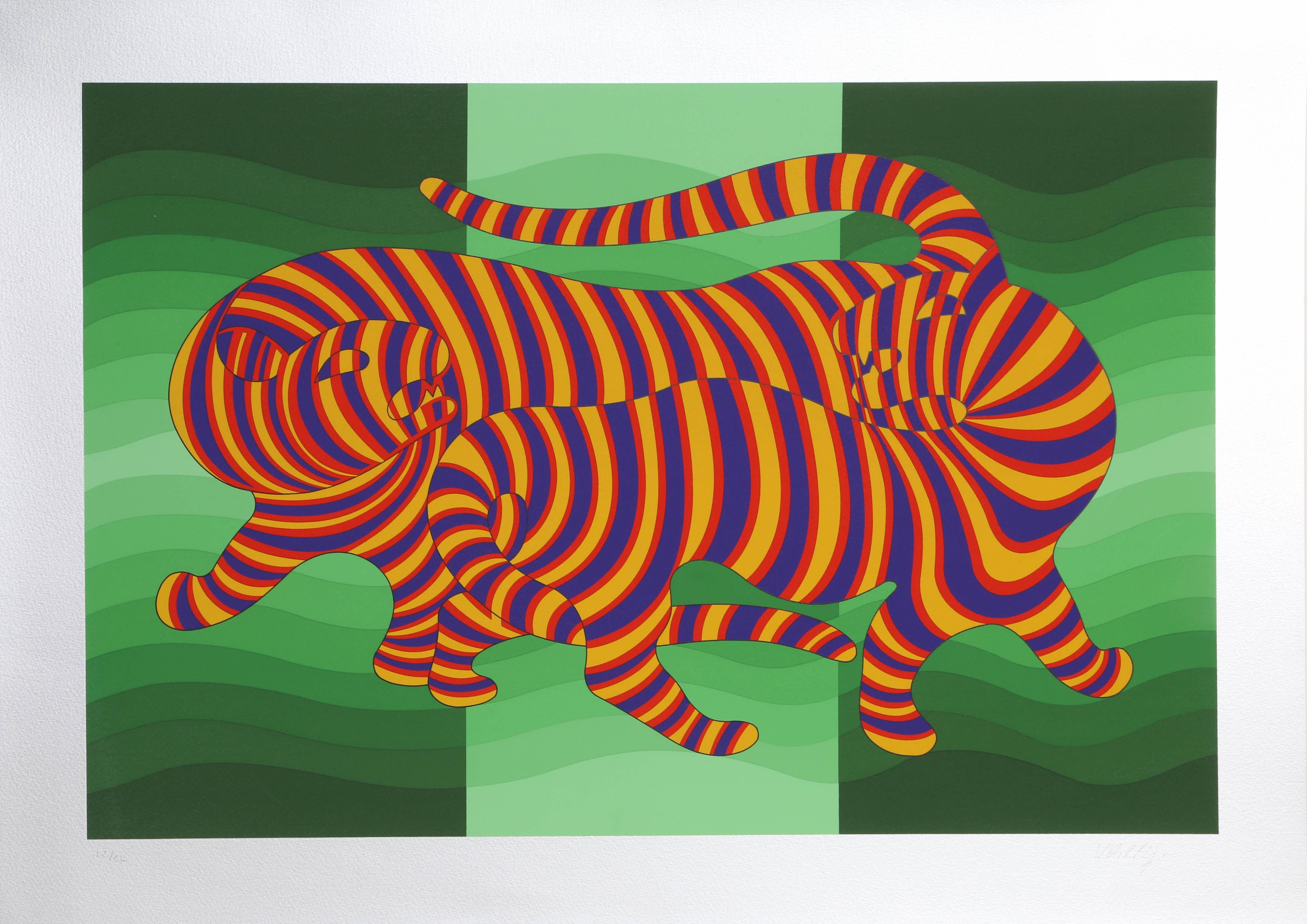 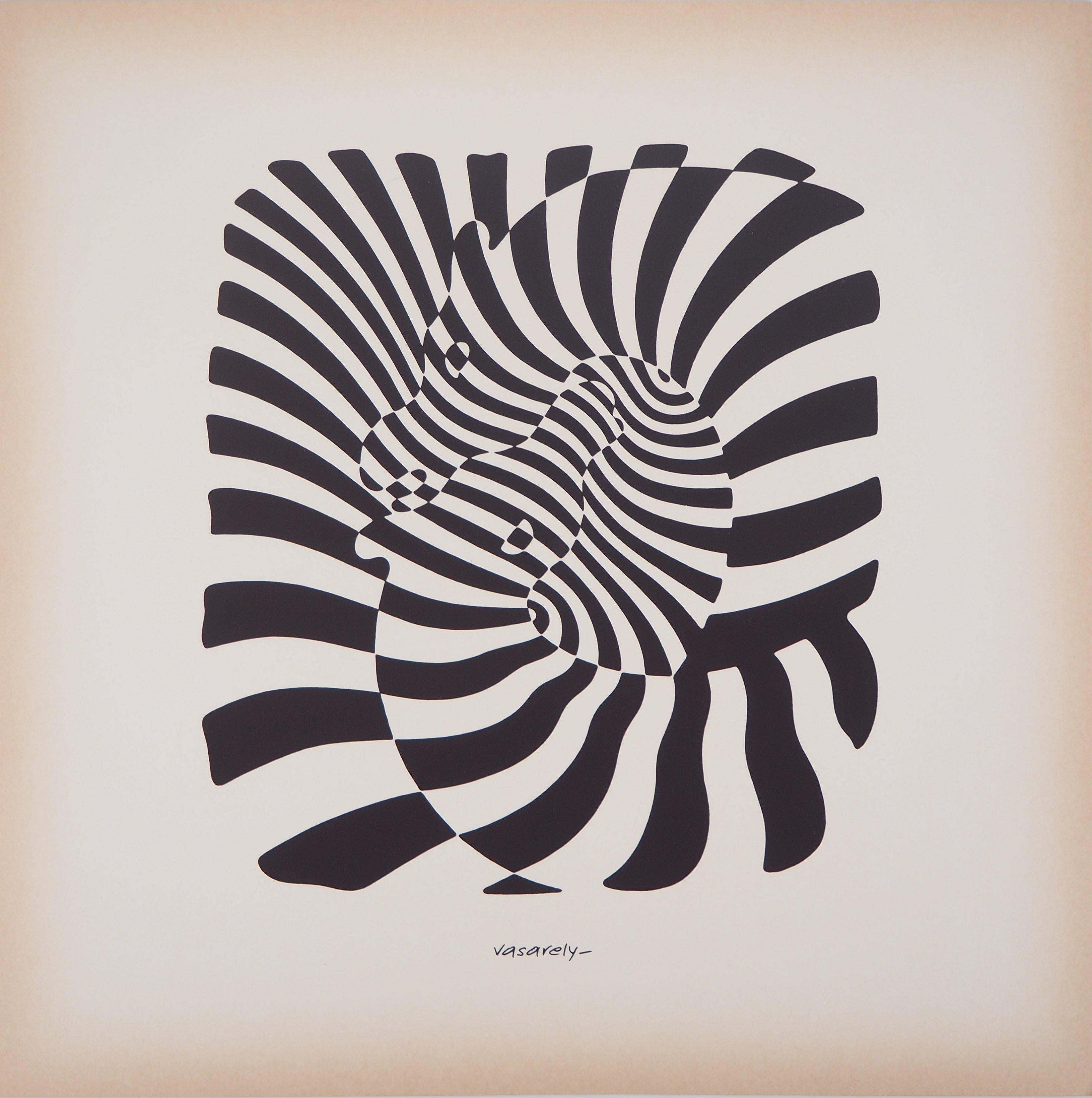 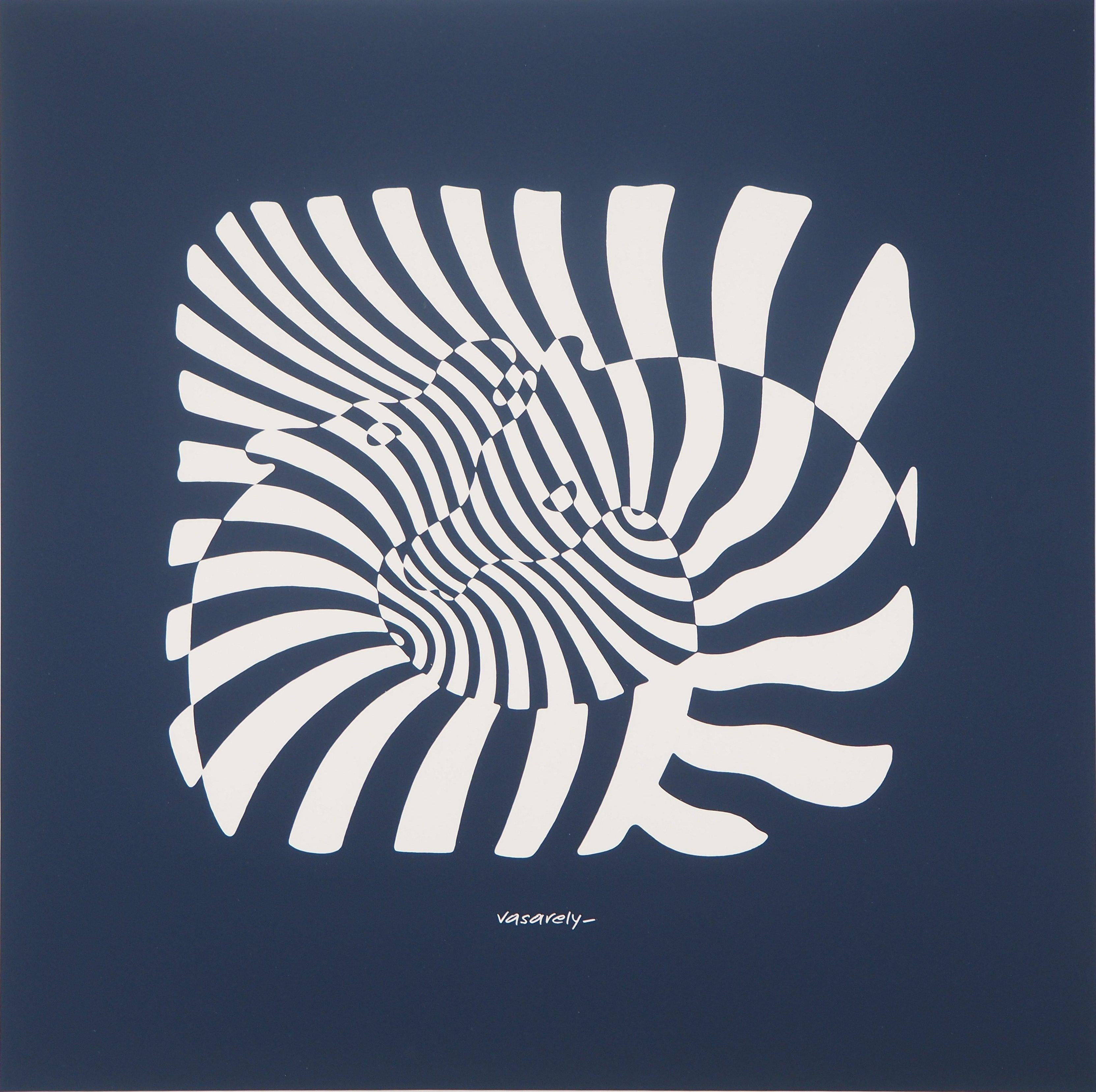 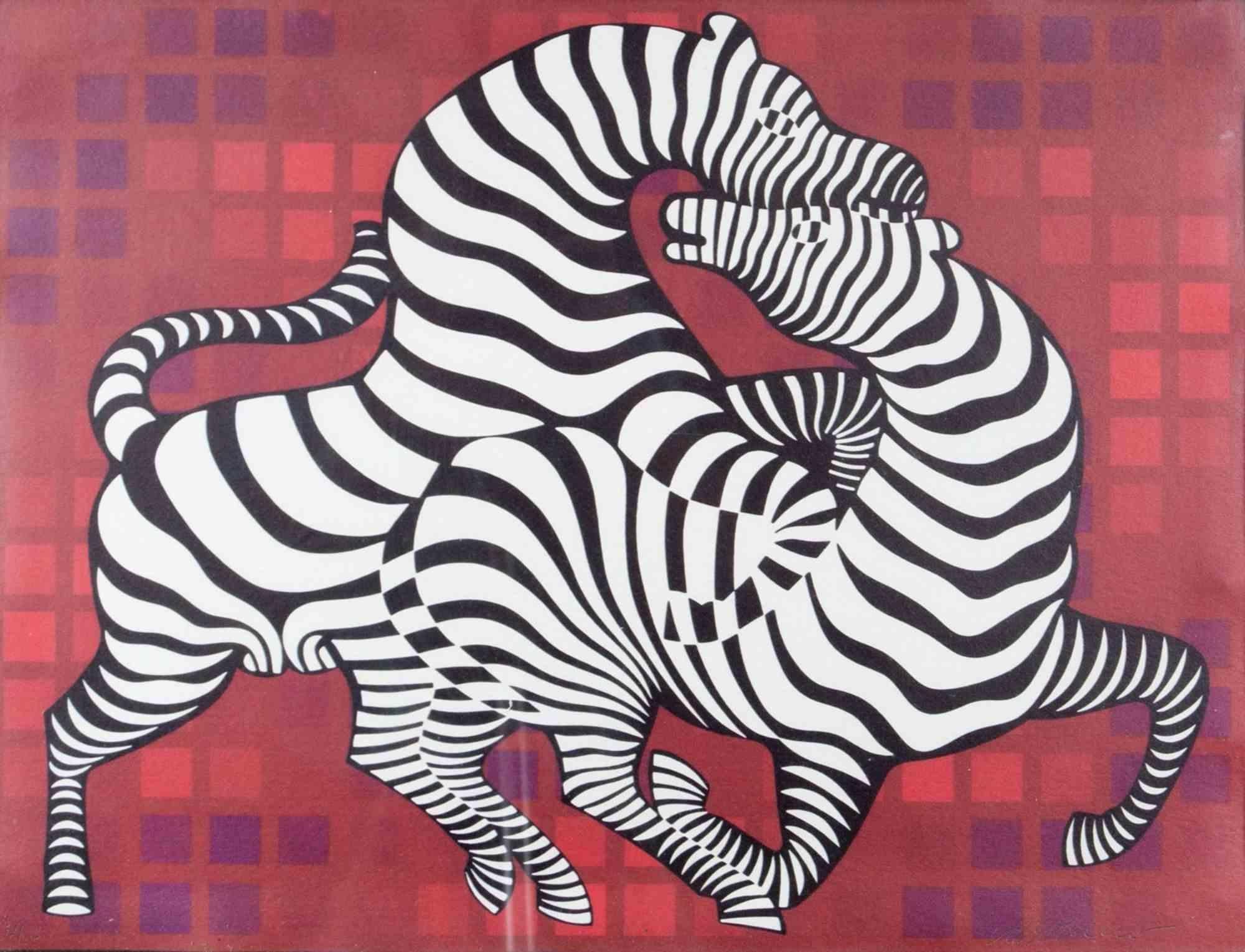 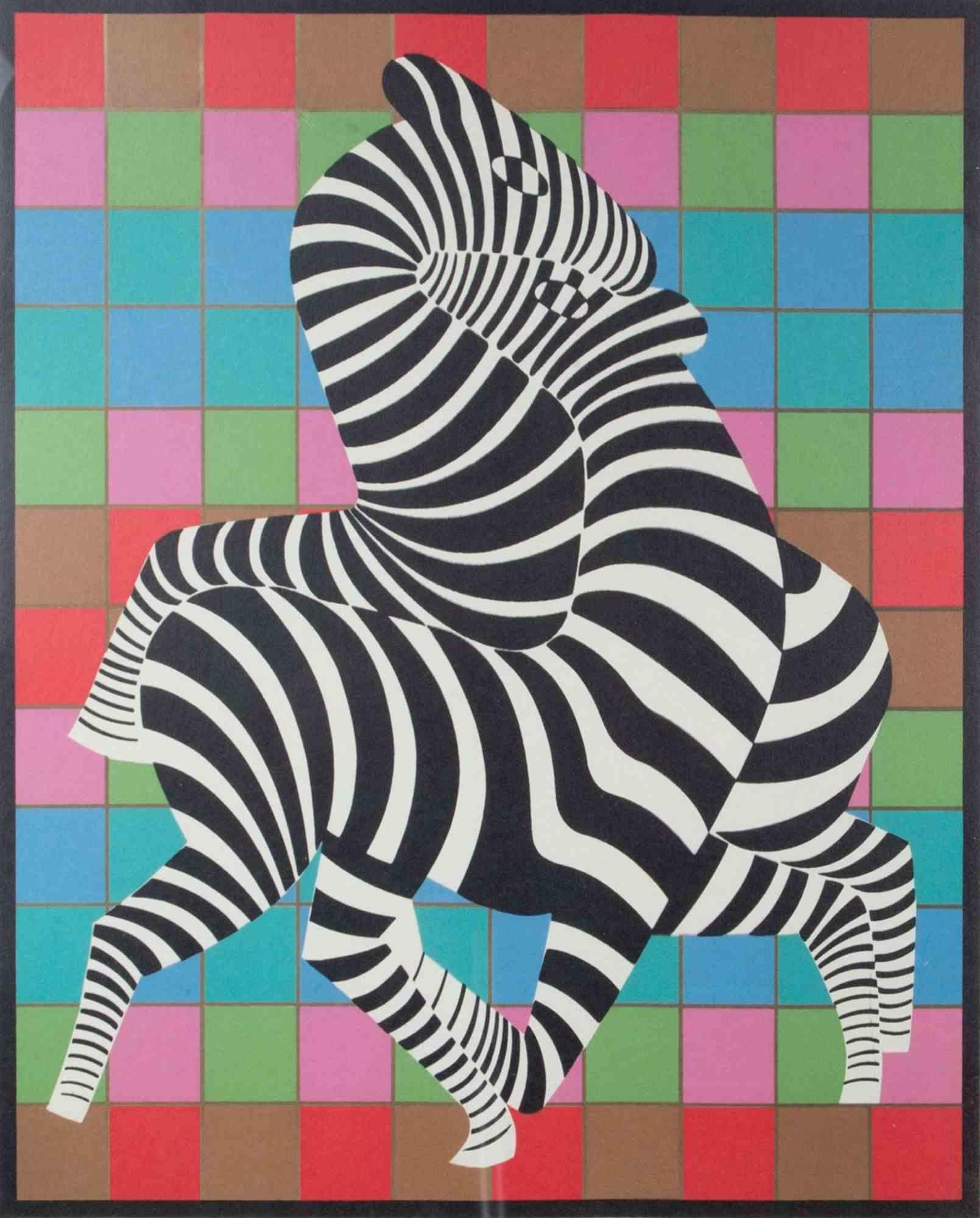 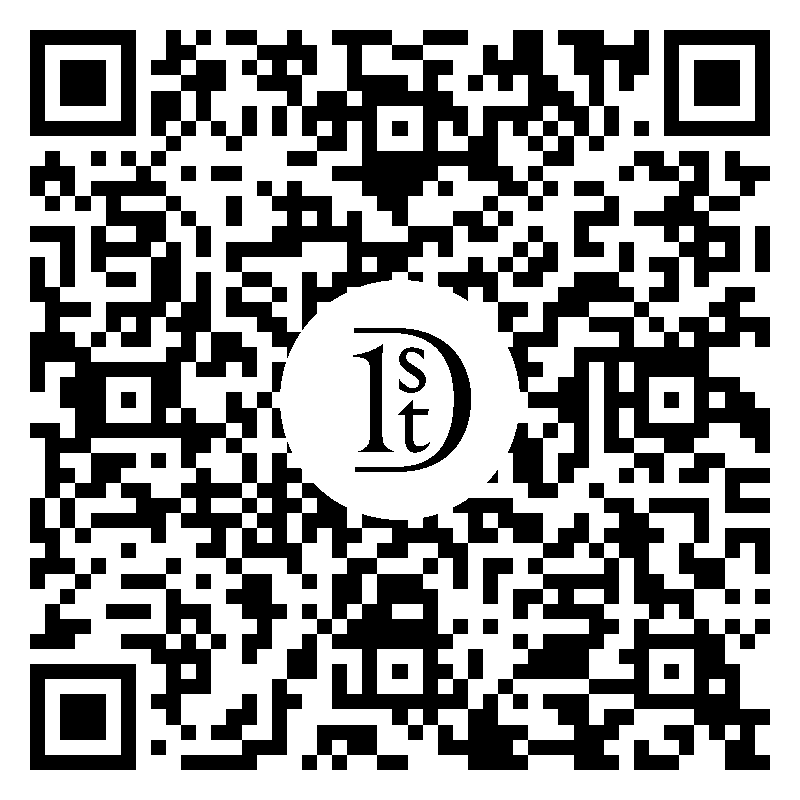 "Zèbre" an original lithograph by Victor Vasarely, is a piece for the true collector. Vasarely is considered the father of the Op-Art movement and developed an iconic style that is recognizable across the globe and has been widely collected for eight decades. His paintings and limited edition works can be found in major museums and private collections. Mathematics plays an important role in Vasarely's art, where he uses colors, shades, and linear structures to create his remarkable pieces. Vasarely's ability to capture the viewer's attention and visually take them through a rollercoaster of illusions is second-to-none. This masterful work is perfect for those who have an affinity for Vasarely's works, optical illusions and Op-Art, or abstract art. Vasarely's zebra-themed works are perhaps his most collected. It is paired with a conservation frame and UV-filtering acrylic, featuring the lithograph floated over the matting so you can view the entire sheet. "Zèbre" was part of the Descartes series and was published by Esselier, Paris. This work has been verified authentic and is listed in the Pablo Benavides/Michele Vasarely Catalogue Raisonné (2015), #108, p.50. Artist: VICTOR VASARELY (1906-1997) Title: ZÈBRE Medium & Surface: LITHOGRAPH ON PAPER (framed) Signed/Numbered: HAND-SIGNED AND NUMBERED BY ARTIST Number: 131 of 138 Year Created: 1969 Country of Creation: FRANCE Image Area Dimensions: 8.5 x 12.75 INCHES Paper Dimensions: 15.75 x 18 INCHES Frame Dimensions:* 25.625 x 28 x 0.875 INCHES *This work of art is being sold in a custom frame. Additional Info: HIGHLY COLLECTIBLE WORK BY VICTOR VASARELY IN A CUSTOM CONSERVATION FRAME WITH UV-FILTERING ACRYLIC – VERIFIED AUTHENTIC – ARTWORK WAS PART OF THE DESCARTES SERIES AND WAS PUBLISHED BY ESSELIER, PARIS. RARE EXCELLENT CONDITION. Artist Info/Bio: ARTIST BIOGRAPHY DOCUMENT IS INCLUDED Documentation: CERTIFICATE OF AUTHENTICITY IS INCLUDED Catalogue Raisonné Reference: PABLO BENAVIDES/MICHELE VASARELY CATALOGUE RAISONNÉ (2015), #108, P.50 About the Artist: Considered the father of the Op Art, Victor Vasarely was born Vásárely Gyözö in Pécs, Hungary on April 9th, 1908. Internationally recognized as one of the most important artists of the 20th century, his innovations in color and optical illusion have had a strong influence on many modern artists. Vasarely was active in France for most of his artistic career. Before moving to Paris, Vasarely studied under the artist Sánor Bortnyik at the Mühely academy, Budapest—a Hungarian equivalent to the German Bauhaus—from 1929 to 1930. Vasarely's training at this institution is reflected in the artist's focus on patterned forms in his early commercial work doing poster design and graphic arts. This early education in the Mühely principles of functionality and applied arts would also have a resounding impact on his later work. Still, Vasarely is primarily known for his later involvement in the international Op-art movement of the 1960s. Vasarely left Budapest in 1930 and resettled in Paris, first seeking employment at several advertising agencies in order to continue his work in the graphic arts, which he would continue to pursue for the next decade. It was only after World War II and the success of his first important Paris exhibition at the Galerie Denise René, Paris, in 1944, that Vasarely left the graphic arts to begin crafting his signature style of pure abstraction in painting. At this point he started to move beyond the technical applications inherent in Bauhaus-style applied art and focused on the geometric abstraction of artists such as Kazimir Malevich and Piet Mondrian. In fact, the works for which he is best known utilize the principle of optical illusion as filtered through the simple forms of artists such as these. Vasarely used Malevich's Suprematist black square as the building block for a dynamic display of optical effects in a series of works entitled Homage to Malevich (Hommage à Malévetch, 1952–58). One incarnation of this series is a group of ceramic works that was displayed in an open-air passage in the Ciudad Universitaria Caracas (University City of Caracas), Venezuela, in 1954, creating a vibrant, shimmering display that created the illusion of movement. In the 1950s Vasarely's works moved more directly into Kinetic art and in 1955 he wrote his famous Manifeste Jaune (Yellow Manifesto) for a major exhibition of Kinetic art, Le Mouvement (The Movement) (in which he also participated), held at the Galerie Denise René. Yet it was not until 1965 that the Op-art exhibition The Responsive Eye at the Museum of Modern Art, New York, consecrated his international recognition as the central figure of the Op-art movement. Vasarely was the recipient of numerous prestigious awards, including the Guggenheim Prize in New York (1964); the Grand prix at the So Paulo Biennial and the Grand prix de la gravure in Ljubljana, Slovenia (both 1965); and the French Chevalier de l'ordre de la Légion d'honneur (1970). He was widely influential for later artists, especially those of GRAV (Groupe de recherche d'art visuel) (Research in Visual Arts Group) in the 1960s. Vasarely died in Paris on March 15, 1997. 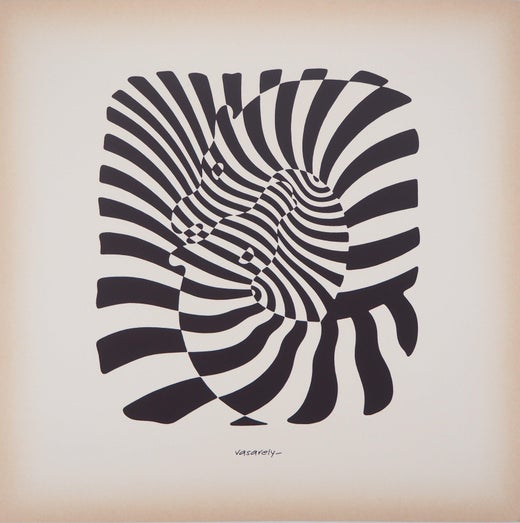 Find a collection of Victor Vasarely prints, paintings, sculptures and other art on 1stDibs.

1stDibs Buyer Protection Guaranteed
If your item arrives not as described, we’ll work with you and the seller to make it right. Learn More
About the Seller
5.0
Located in Los Angeles, CA
Platinum Seller
These expertly vetted sellers are 1stDibs' most experienced sellers and are rated highest by our customers.
Established in 1998
1stDibs seller since 2021
37 sales on 1stDibs
Typical response time: <1 hour
More From This SellerView All
People Also Browsed
You May Also Like
Featured in Popular ArtistsView All