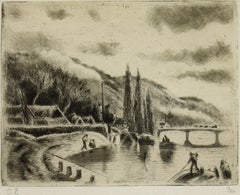 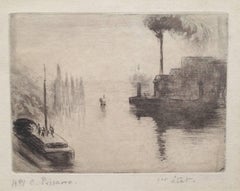 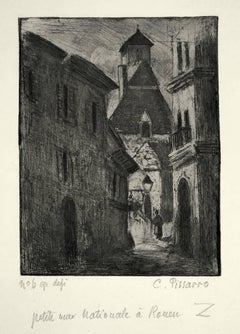 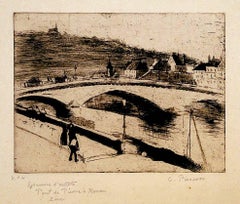 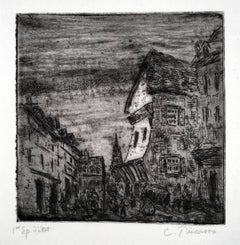 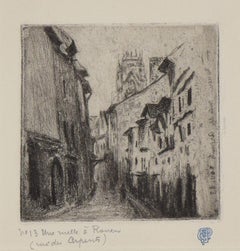 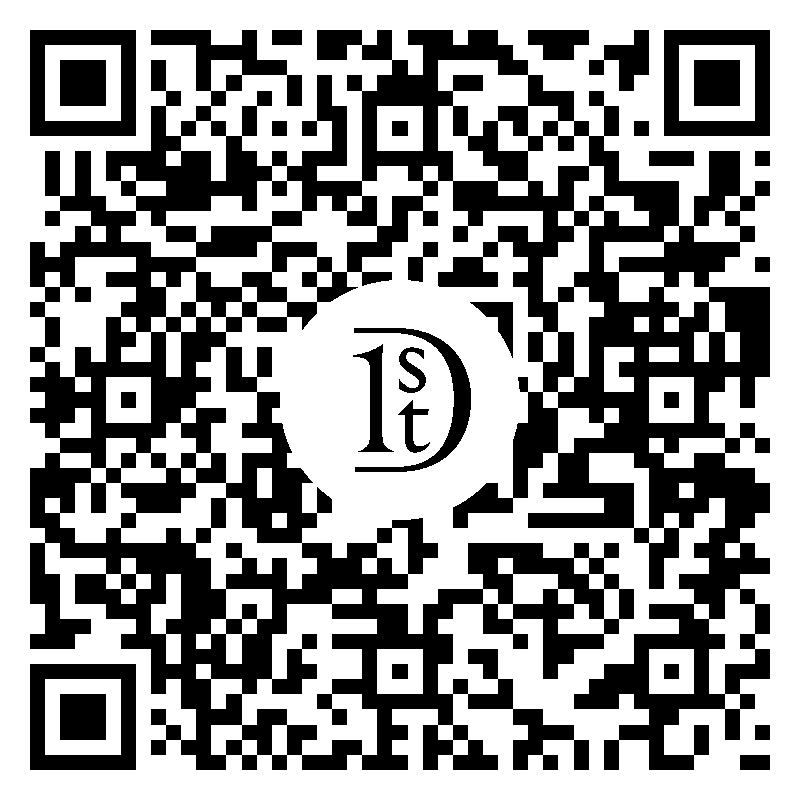 CAMILLE PISSARRO (1830-1903) THE COTTAGE (LA MASURE) 1879. (Delteil 20 vii/vii) Aquatint, etching & soft ground. Very Good Condition. On fine Whatman watermark paper. Signed with the C. P. ink stamp (Lugt 613e) and numbered in pencil 16/30. image 6 1/2 x 6 5/8", sheet 8 3/8 x 10 7/8". Sheet in very good condition, uneven light in photos. According to Delteil, there were only 7 lifetime impressions of thIs final state. This impression is likely from the 1922 posthumous edition of 30. A VERY NICE EXAMPLE OF THIS PRINT Note: lighting of the sheet is uneven, and it is in good condition with no toning whatsoever.

In 1869, Camille settled in Louveciennes. The outbreak of the Franco-Prussian War in 1870 prompted him to move to England, and, with Monet, Camille painted a series of landscapes around Norwood and Crystal Palace, whilst studying English landscape painting in the museums. Upon returning a year later at the end of the War to Louveciennes, Camille discovered that only 40 of his 1,500 paintings — almost 20 years’ work — remained undamaged.

In the 1880s, Camille moved from Pontoise to nearby Osny, before Eragny, a small village much further from Paris. At a time when he was dissatisfied with his work, in 1885, Camille met both Paul Signac and Georges Seurat. He was fascinated by their efforts to replace the intuitive perceptive approach of the Impressionists with a “Divisionist” method, or scientific study of nature’s phenomena based on optical laws. Despite having reached his mid-50s, Camille did not hesitate to follow the two young innovators. The following year, he passed on this new concept to Vincent Van Gogh, who had just arrived in Paris and was keen to learn of the most recent developments in art. However, after a few years, Camille felt restricted by Seurat’s theories and returned to his more spontaneous technique whilst retaining the lightness and purity of colour acquired during his Divisionist phase.

In the last years of his life, Camille divided his time between Paris, Rouen, Le Havre and Eragny, painting several series of different aspects of these cities, with varying light and weather effects. Many of these paintings are considered amongst his best and make for an apt finale to his long and prodigious career.

5 / 5
Our team of world-class specialists approve every seller on 1stDibs.
This distinction is for experienced sellers who continually surpass customer expectations.
This designation is for sellers whose items consistently exemplify the best of 1stDibs.
This seller is a vetted member of professional associations.
1stDibs seller since 2016
Typical response time: 1 hour
Located in Santa Monica, CA