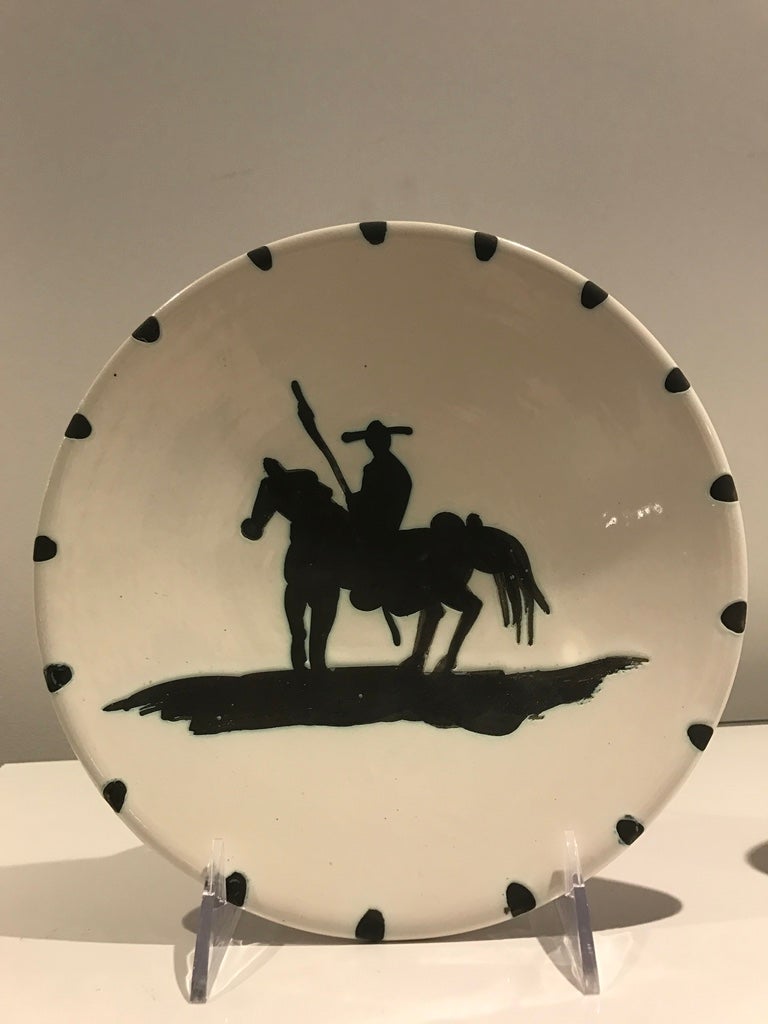 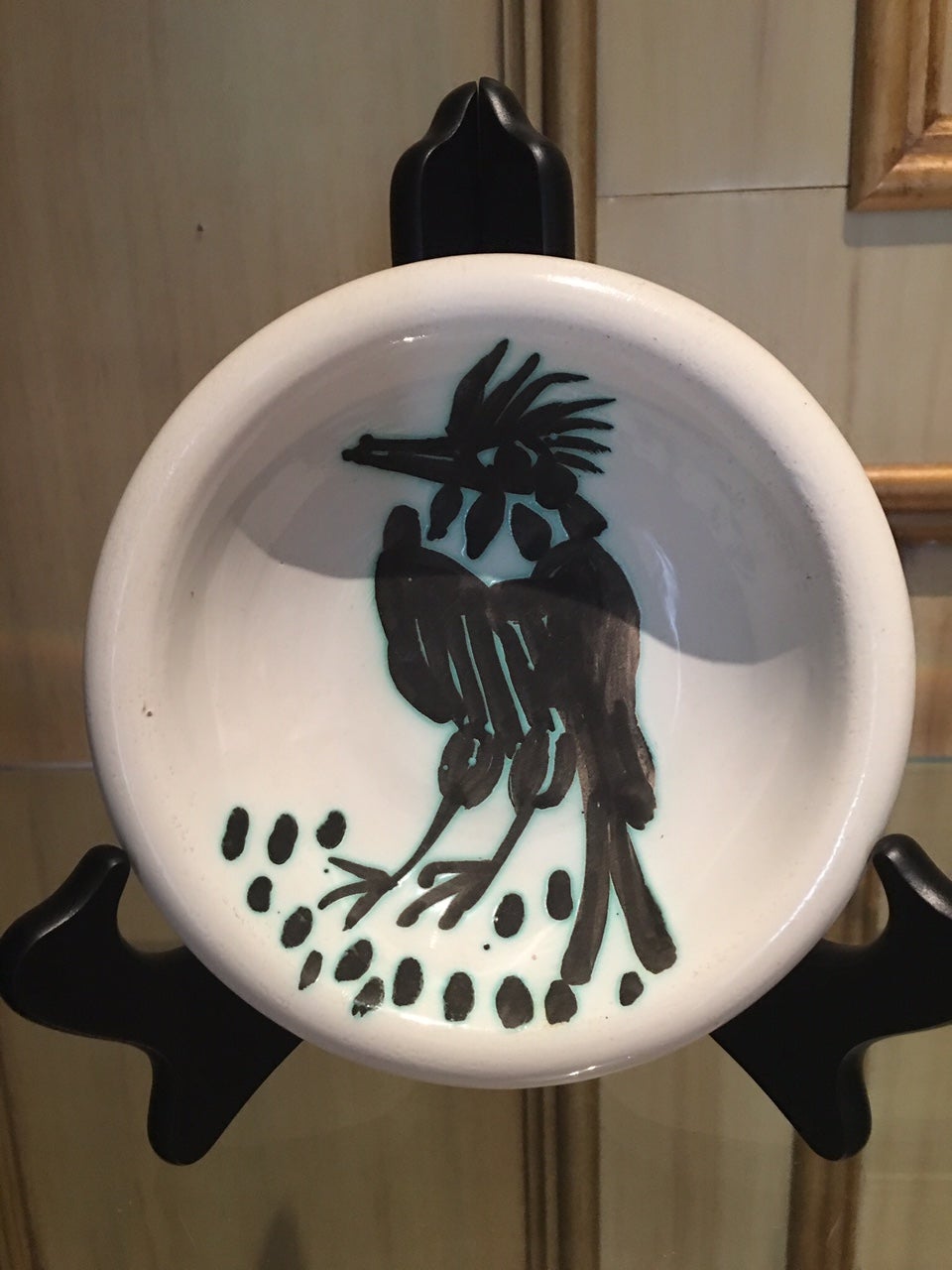 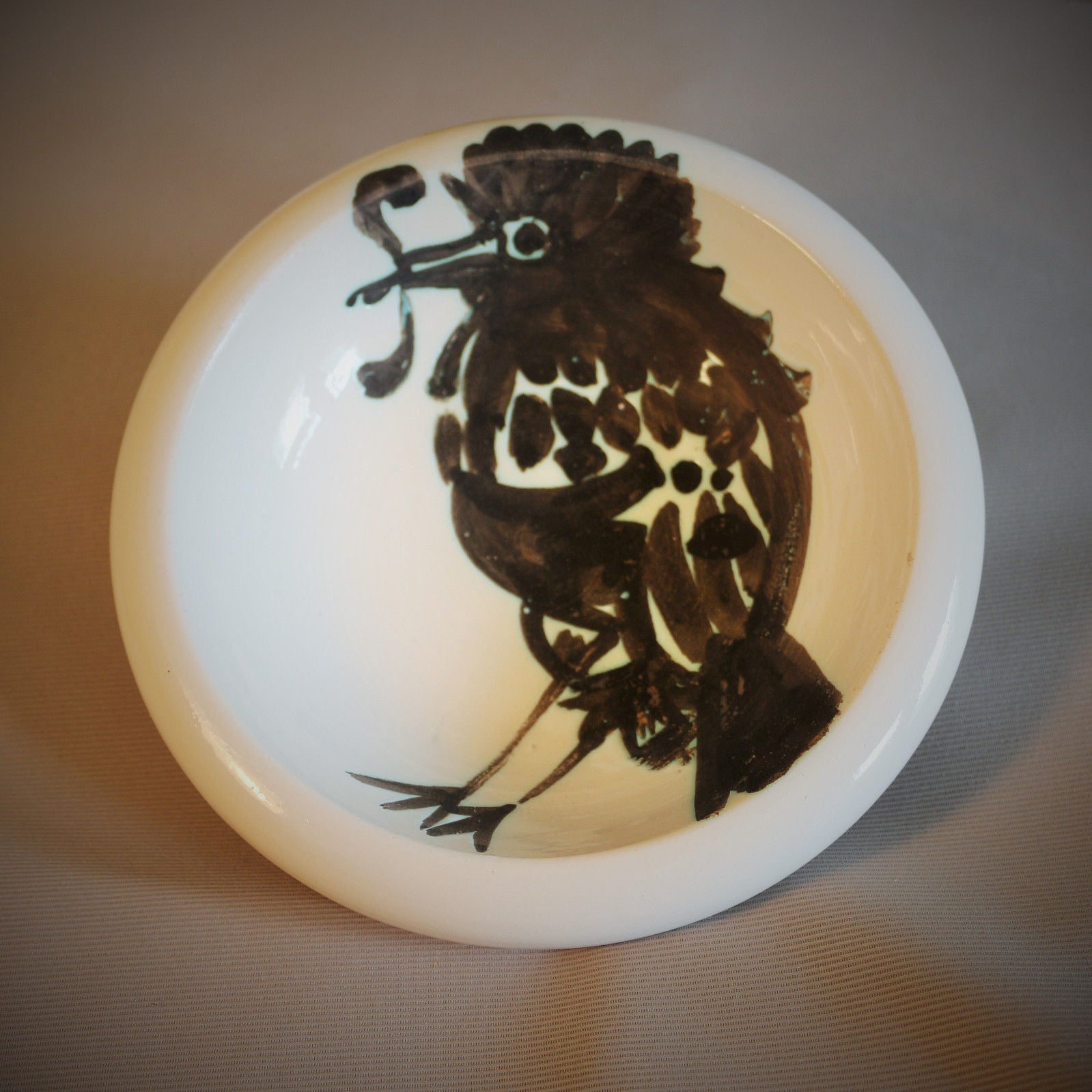 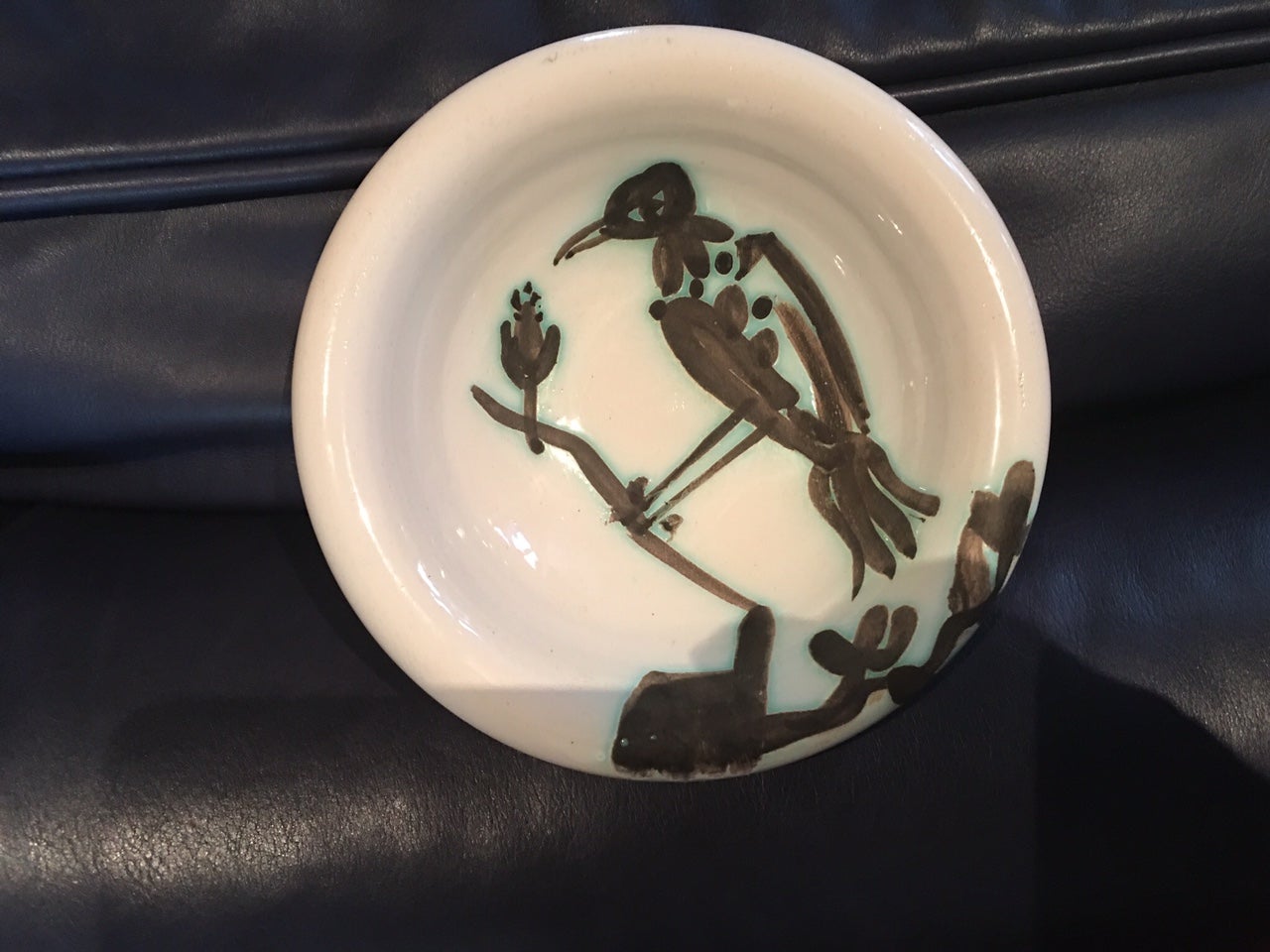 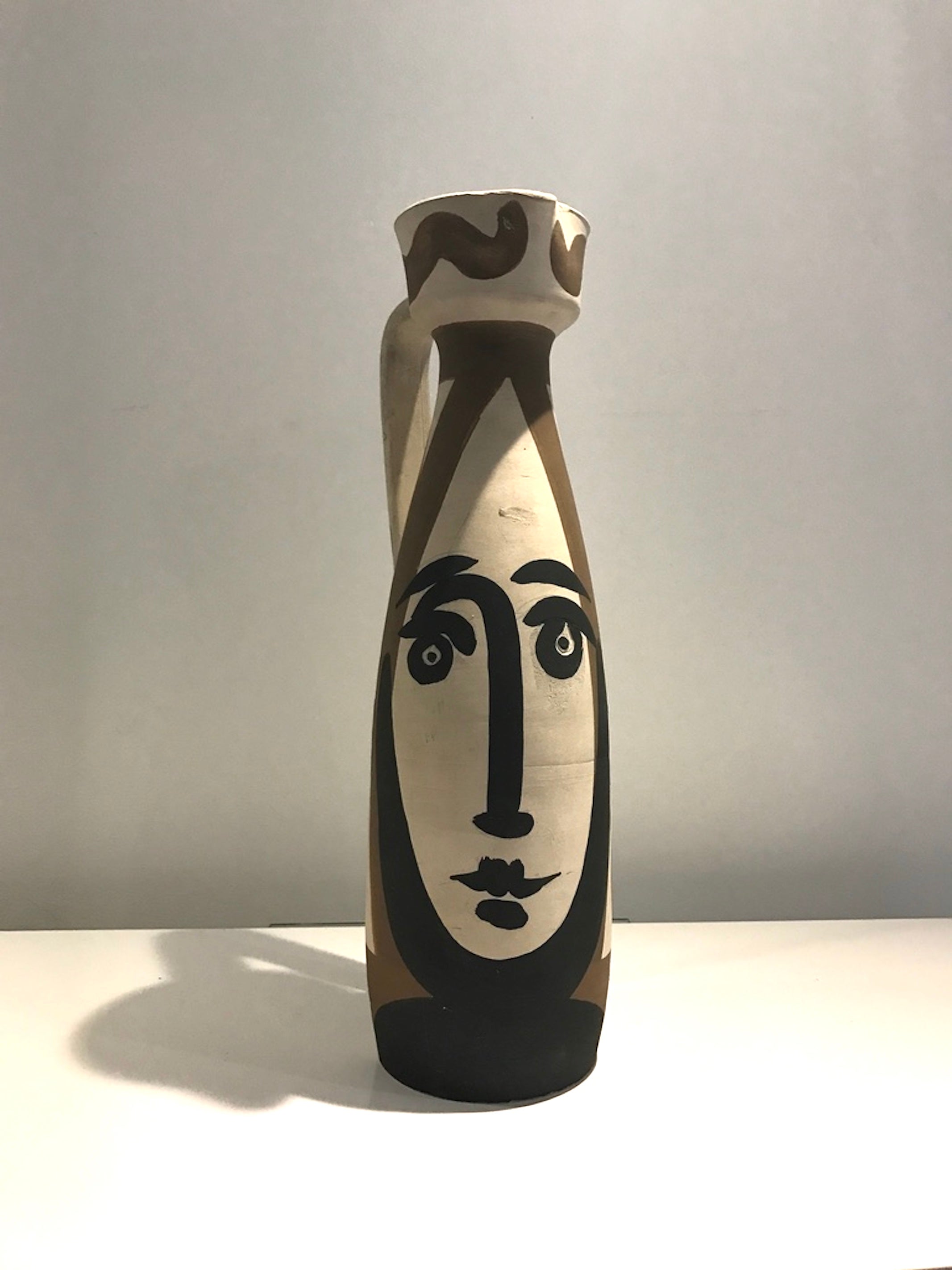 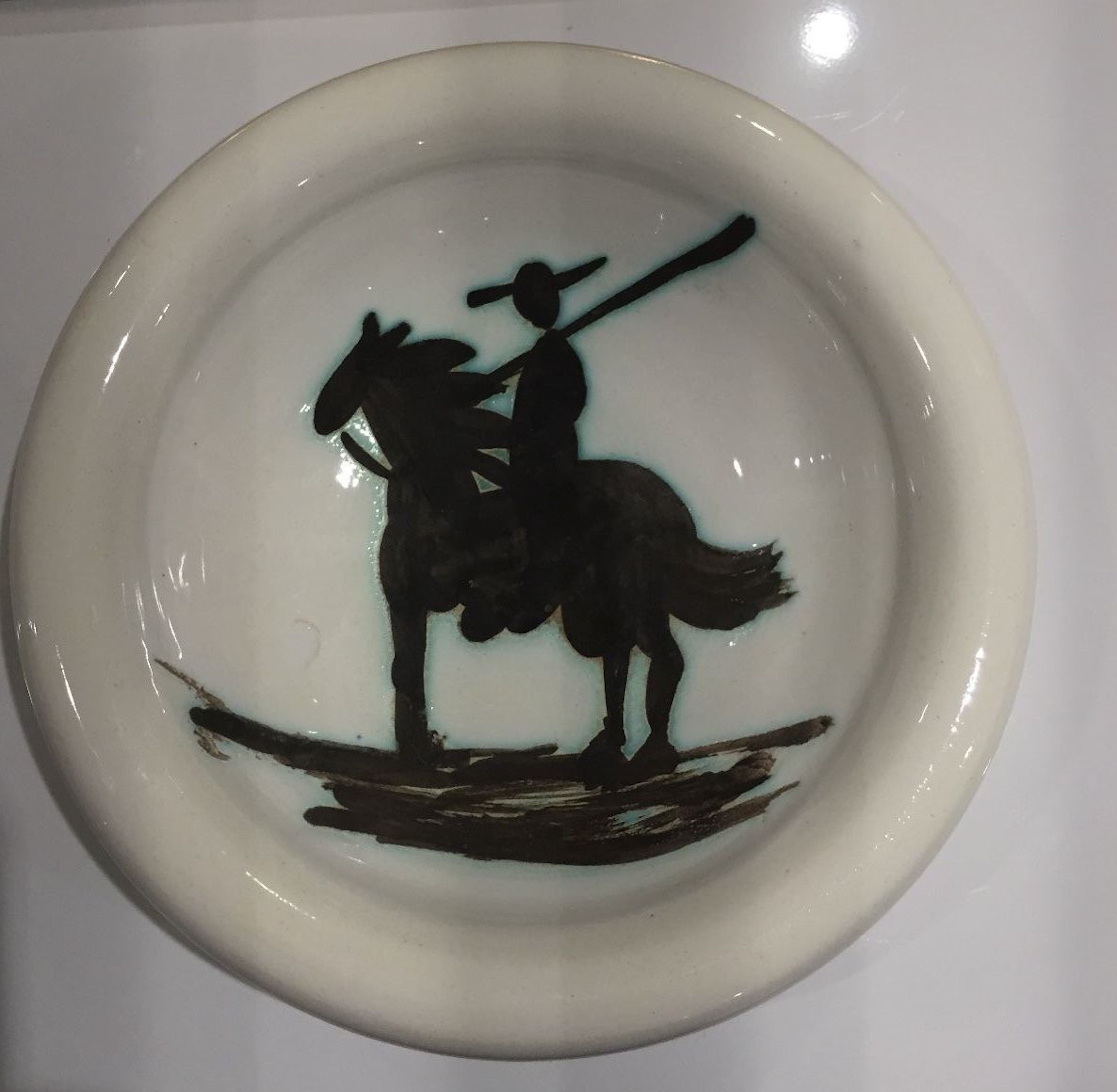 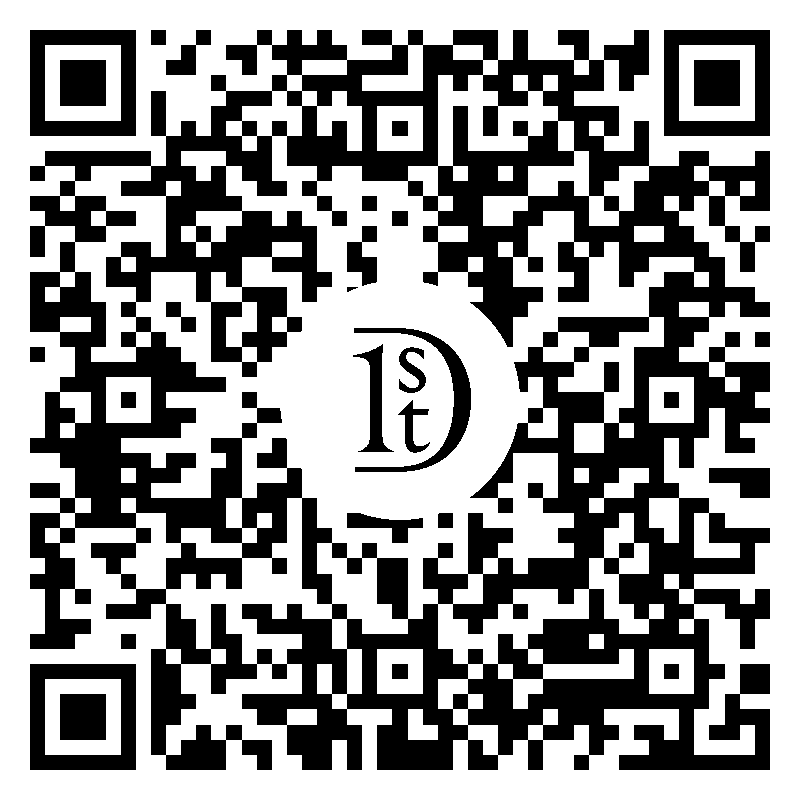 BULL, RIM WITH LEAVES 1957. Alain Ramie` No. 394. Picasso, Catalogue of the Edited Ceramic Works” Red earthenware turned round plate, painted in black. With the Madoura Plein Feu” and “Edition Picasso” pottery stamps on the reverse. Incised “Edition Picasso”, “K-118” and numbered out of 500 on the reverse. Diameter: 9” Edition size: 500 Pablo Picasso is without doubt the most widely collected artist of the 20th century. For five years in the 1950’s, Picasso produced ceramic plates, vases and bowls in the Madoura studio in France. The studio was owned by Georges Ramie, who catalogued all of the artwork that Picasso produced during that time. Each plate, vase and bowl is assigned a unique number according to the number in the Ramie catalogue. The prices of Picasso Madoura Ceramics have been on fire lately (no pun intended). The major auction houses – Sotheby’s, Christie’s and Phillips – have now been regularly holding Picasso Madoura Ceramic auctions. Pieces that sold for $2,000 fifteen years ago are going for $8,000 and more now. A collector should consider several factors when deciding from whom to purchase Picasso Madoura Ceramics: Firstly, when one purchases from an auction house, one pays a buyer’s premium of anywhere from 23% to 28% over the “hammer price”. So when one “wins” an auction for $20,000, the actual price paid is more like $25,000. By contrast, when purchasing from us, the price agreed to is the price paid by the buyer, no hidden fees. Secondly, when one purchases from an auction house, the buyer pays the packing and shipping fee, which are usually exorbitant. By contrast, when purchasing from us, the price includes packing and shipping. Thirdly, when one purchases from an auction house, the sale is final. If one receives the piece and is not 100% satisfied with it, there is nothing the buyer can do about it. They are stuck with it. By contrast, when purchasing from us, the buyer has sixty days to determine if they want to keep it. If not, the buyer returns to piece to us for full refund, and we pay the shipping both ways! Fun fact: no one has ever returned a piece to us! Please note also that many Picasso Madoura Ceramics are auctioned at foreign auction houses. When purchasing at one of these auctions, not only are the factors listed above magnified, but one also has to consider the problems of getting the piece through Customs. There are often delays and considerable fees to pay in order to import the item. When purchasing from us, we ship the same day and you receive it via FedEx the next day, no problems or hassles. Many people have asked about a Certificate of Authenticity. Note that the Picasso Estate have has, and does not, issue Certificates of Authenticity. Any Certificates of Authenticity for Picasso Madoura Ceramics are issued by private, independent dealers, including us. We issue a Certificate of Authenticity with each piece we sell. Having said that, to date, there has not been a surfacing of fakes Picasso Madoura Ceramics like there have been with works by other artists such as Rodin, Chagall and Dali. Many people have also asked if we can provide the provenance for a given piece. Unfortunately, we cannot. We are constantly buying Picasso Madoura Ceramics from auctions, estates, private collectors and deaccessioning museums. Most of the time, the seller has no history of ownership. This particular piece is pristine: there are no nicks, bruises or scratches of any kind. It is really a good value at this price. Please do not hesitate to ask us questions. We love talking about these pieces! In 1895, Picasso was traumatized when his seven-year-old sister, Conchita, died of diphtheria. After her death, the family moved to Barcelona, where Ruiz took a position at its School of Fine Arts. Picasso thrived in the city, regarding it in times of sadness or nostalgia as his true home. Ruiz persuaded the officials at the academy to allow his son to take an entrance exam for the advanced class. This process often took students a month, but Picasso completed it in a week, and the jury admitted him, at just 13. The student lacked discipline but made friendships that would affect him in later life. His father rented a small room for him close to home so he could work alone, yet he checked up on him numerous times a day, judging his drawings. The two argued frequently. Picasso's father and uncle decided to send the young artist to Madrid's Royal Academy of San Fernando, the country's foremost art school. At age 16, Picasso set off for the first time on his own, but he disliked formal instruction and stopped attending classes soon after enrollment. Madrid held many other attractions. The Prado housed paintings by Diego Velázquez, Francisco Goya, and Francisco Zurbarán. Picasso especially admired the works of El Greco; elements such as his elongated limbs, arresting colors, and mystical visages are echoed in Picasso's later work. 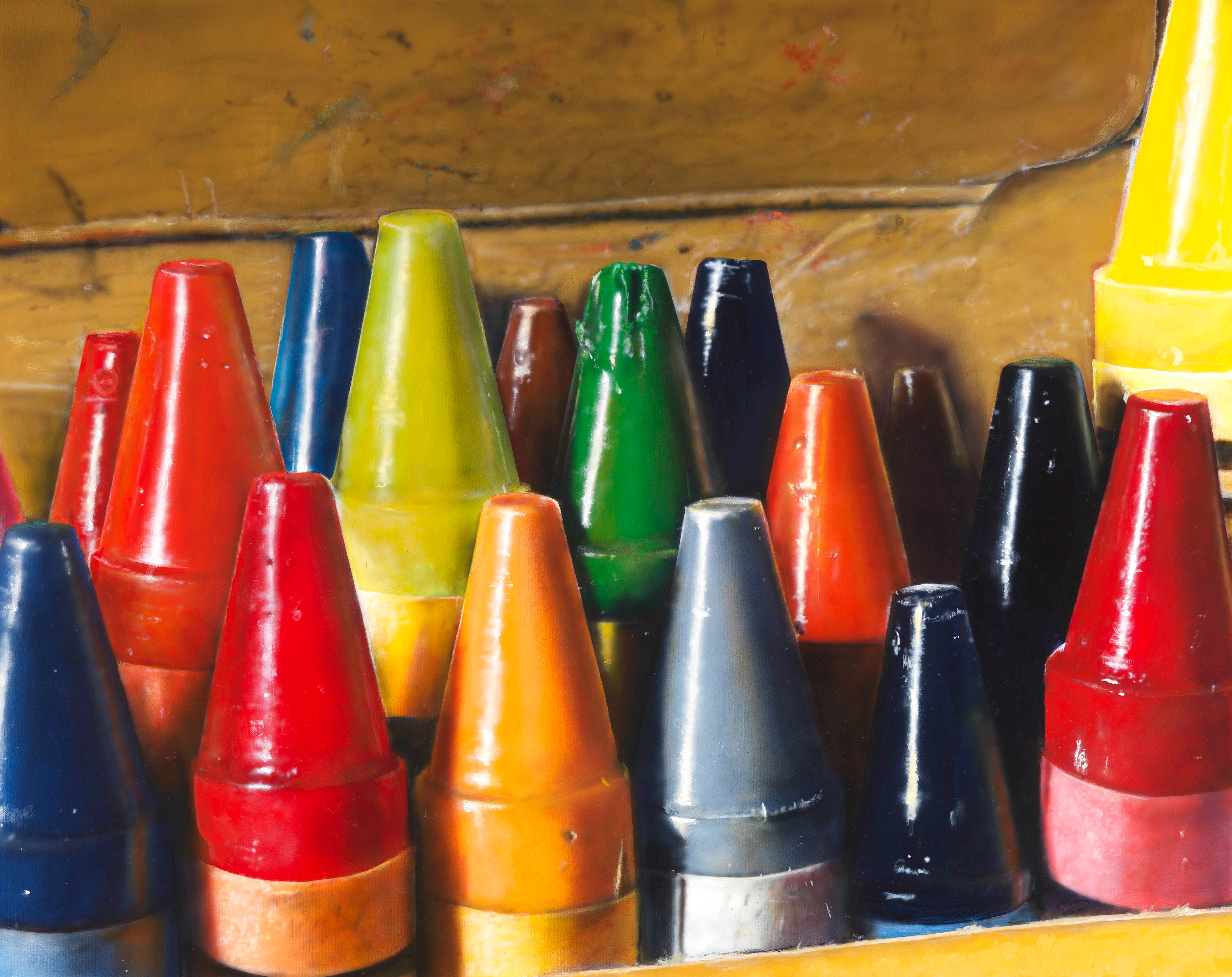 About the Seller
5 / 5
Located in Boca Raton, FL
Gold Seller
These expertly vetted sellers are highly rated and consistently exceed customer expectations.
Established in 1985
1stDibs seller since 2014
131 sales on 1stDibs
Typical response time: <1 hour
More From This Seller
View All From Seller

$17,500
Pablo Picasso Madoura Ceramic Plate - 'Visage No. 30,' Ramié 464
By Pablo Picasso
Located in New York, NY
Picasso's 'Terre de faïence', Ramié 464 is made of earthenware clay, partially glazed in colors. This piece is from a small edition size- one of only 150 copies produced and is inscr...
Category

$16,500
Pablo Picasso Madoura Ceramic Plate - Visage no. 130 , Ramié 479
By Pablo Picasso
Located in New York, NY
This Picasso ceramic plate "Visage no. 130" is one in an edition of 500 and is made of white earthenware clay, and decorated with engobes and enamel under glaze. The piece is marked ...
Category

$22,000
Madoura Ceramic Plate- Visage d'Homme, Ramié 287
By Pablo Picasso
Located in New York, NY
This Picasso ceramic plate "VISAGE D'HOMME, Ramié 287" is made of white earthenware clay and decorated with an effortless design. Please contact us with any questions.
Category