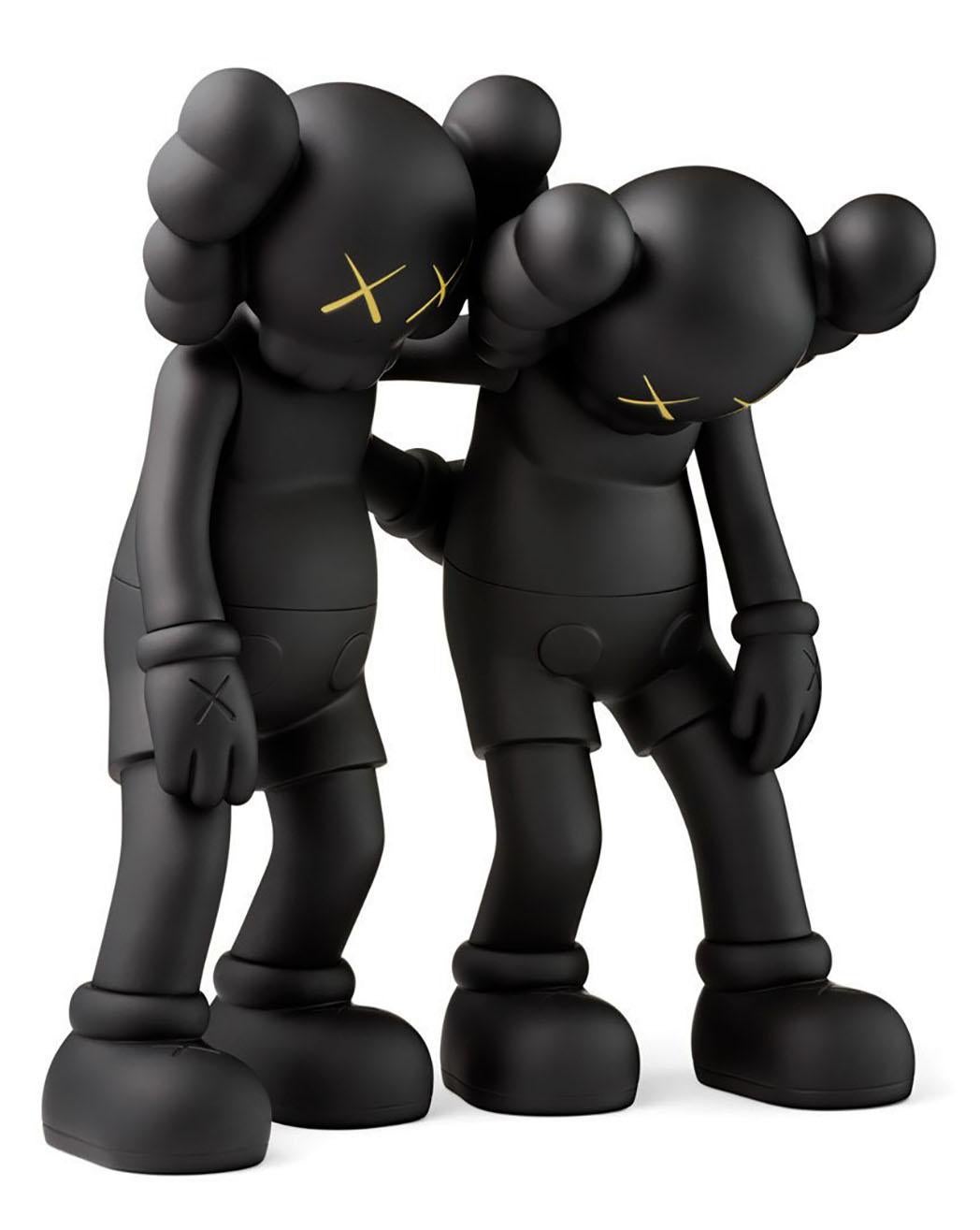 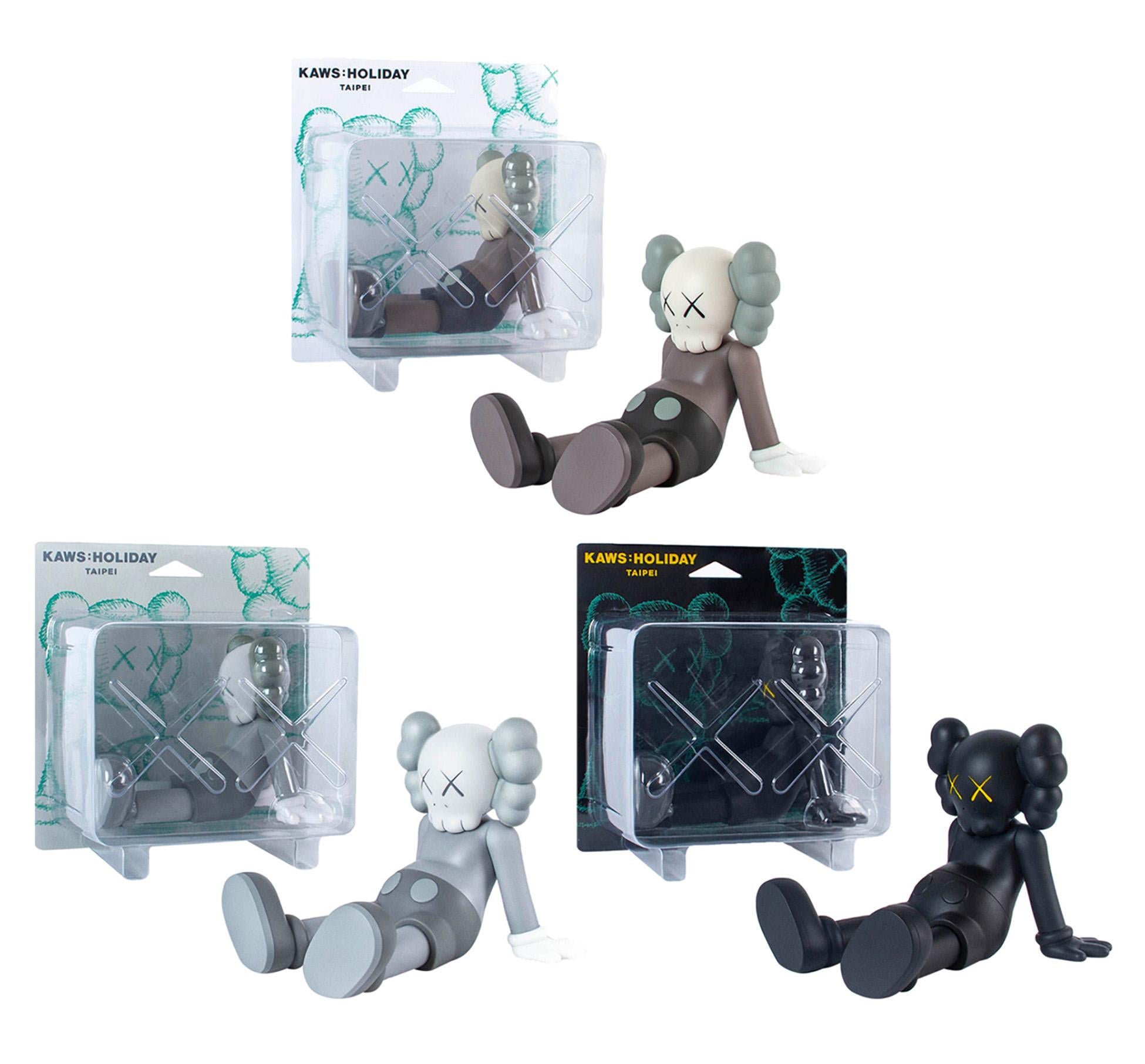 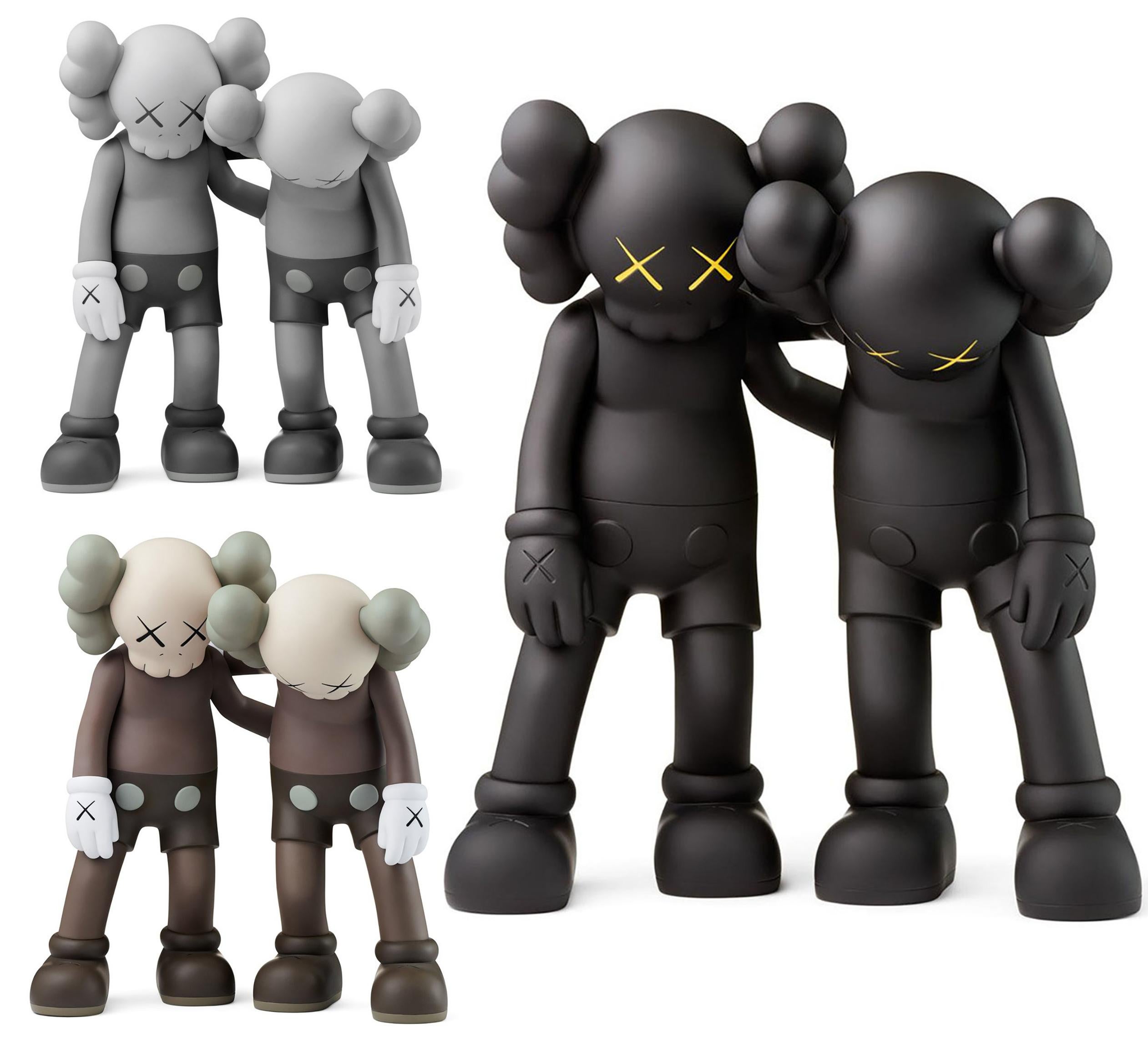 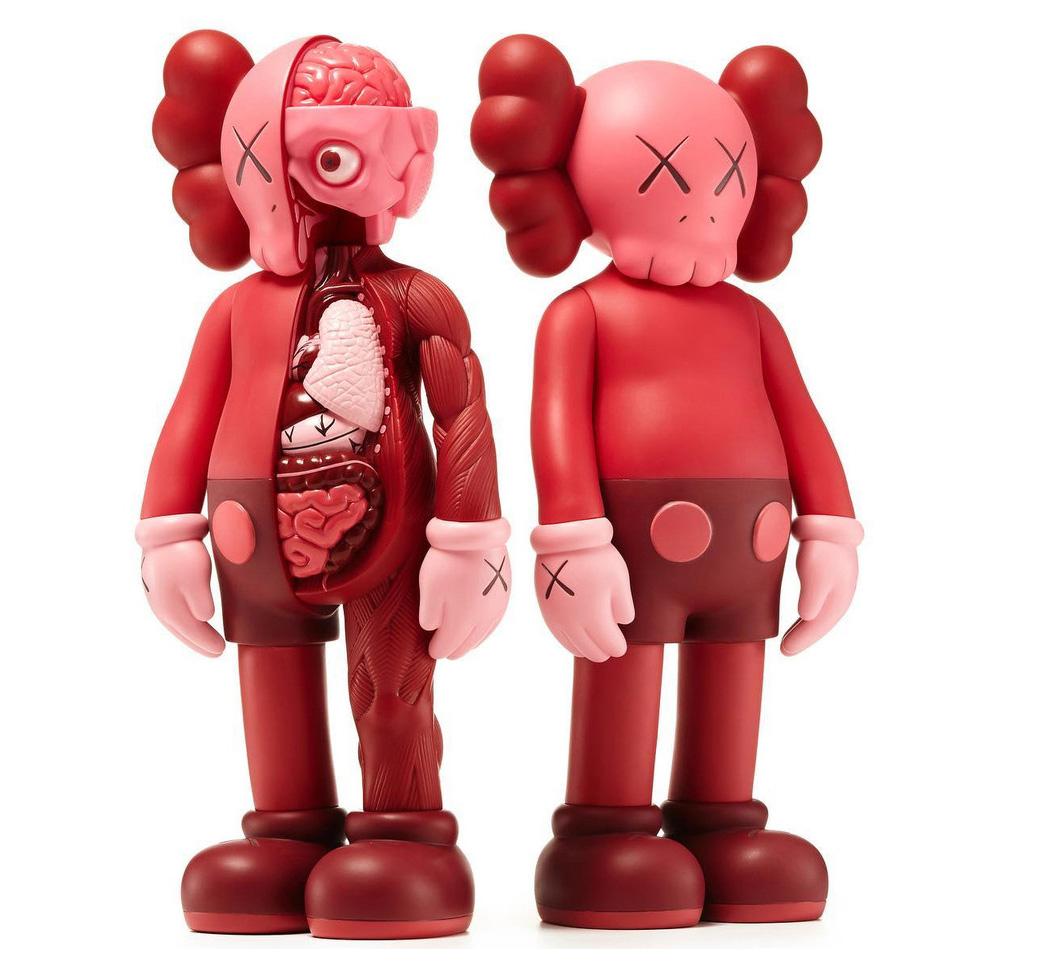 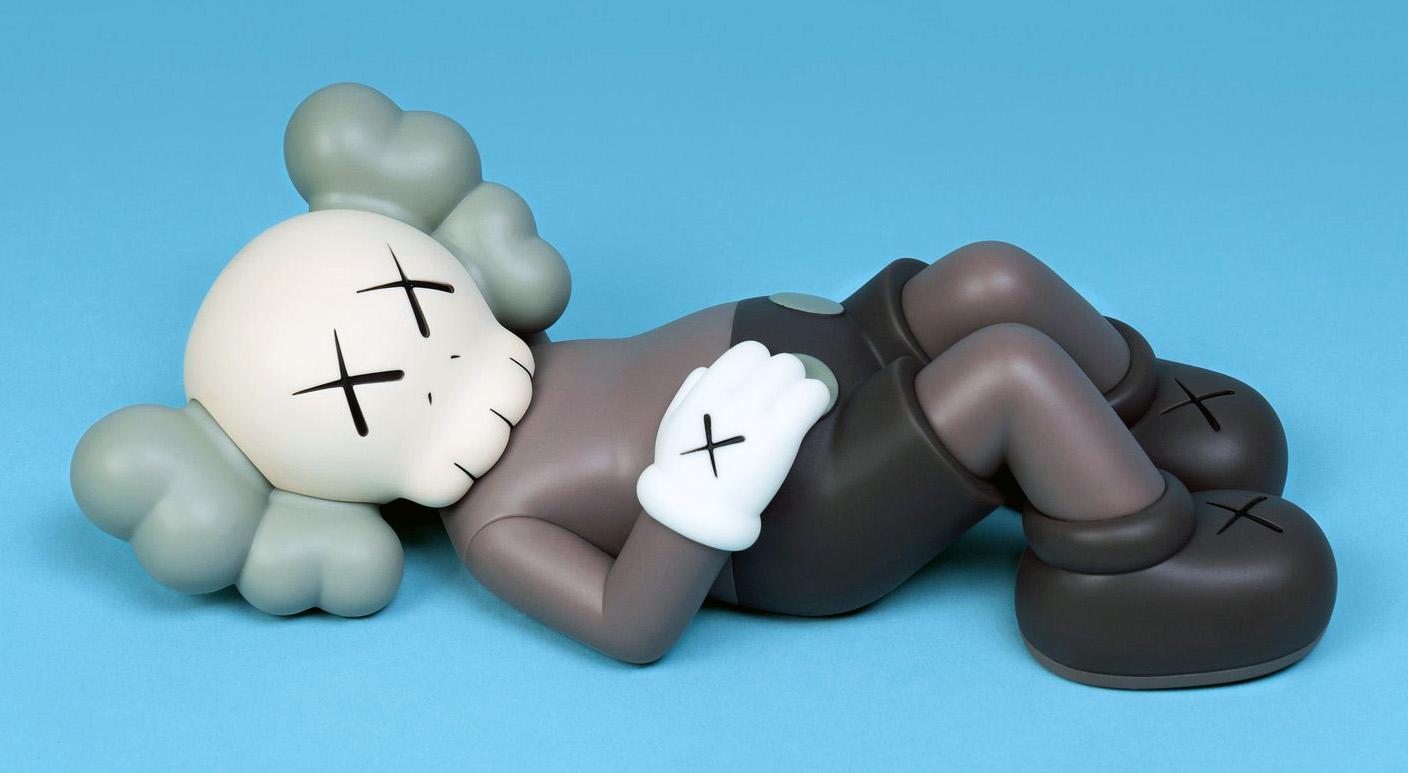 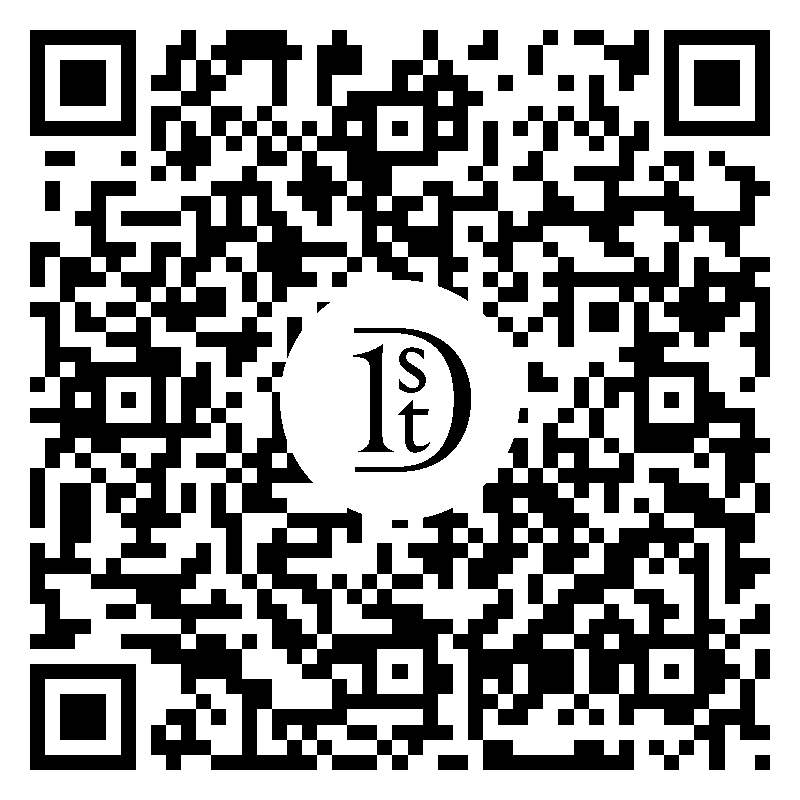 KAWS SMALL LIE: Complete Set of Three. Each new and sealed in their original packaging. These KAWS figurative pieces are a rendition of Small Lie produced in collaboration with Qatar Museums, a 30-feet-tall sculpture constructed out of African hardwood; the same size and material to create his previous SMALL LIE figure at the Yorkshire Sculpture Park in England in 2016. Medium: Painted vinyl cast resin. Dimensions: 11 × 4.5 inches (applies to each individual). New/unopened; excellent condition (applies to each). Stamped on underside of each individual foot. Executed in 2017, this work is from a sold out edition of unknown published by Medicom Japan. Authenticity guaranteed. KAWS (b. 1974, Jersey City, New Jersey; lives and works in Brooklyn, New York) is renowned for his prolific body of work that straddles the worlds of art and design to include paintings, murals, graphic and product design, street art, and large-scale sculptures. Over the last two decades KAWS has built a successful career with work that consistently shows his formal agility as an artist, as well as his underlying wit, irreverence, and affection for our times. His refined graphic language revitalizes figuration with both standout gestures and playful intricacies. KAWS often appropriates and draws inspiration from pop culture animations, forming a unique artistic vocabulary across mediums. Admired for his larger-than-life sculptures and precise paintings that emphasize line and color, KAWS’s cast of hybrid cartoon characters are the strongest examples of his exploration of humanity. As seen in his collaborations with global brands, the artist’s imagery possesses a sophisticated humor and reveals a thoughtful interplay with consumer products. With their broad appeal, KAWS’s artworks are highly sought-after by collectors inside and outside of the art world, establishing him as a uniquely prominent artist and influence in today’s culture.  Related Categories Kaws Companion. Kaws Pinocchio. Shepard Fairey. Street Art. Damien Hirst. Takashi Murakami. Keith Haring. 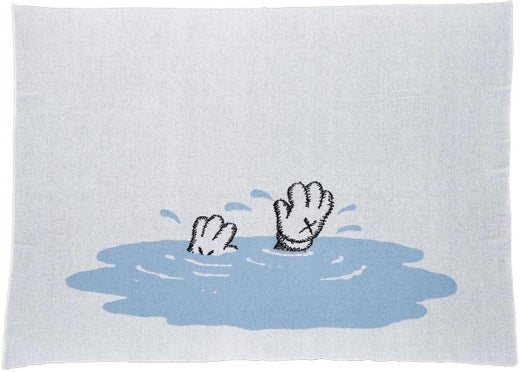 About the Seller
4.9 / 5
Located in NEW YORK, NY
Vetted Seller
These experienced sellers undergo a comprehensive evaluation by our team of in-house experts.
Established in 2014
1stDibs seller since 2016
3,172 sales on 1stDibs
Typical response time: 1 hour
More From This Seller

Separated (Set of Three)
By KAWS
Located in Bristol, GB
Painted cast vinyl Open edition Unsigned and unnumbered New, with minor deposits found in crevices of two of the three sculptures though it is masked by the colour of the sculpture. ...
Category

$120,000
Ups and Downs
By KAWS
Located in New York, NY
2013 The complete set of 10 screenprints in colors, on Saunders Waterford High White paper 35 x 23 inches, each Edition of 100 + 20AP All signed, dated and numbered in pencil
Category

Price Upon Request
Ups and Downs
By KAWS
Located in New York, NY
2013 The complete set of 10 screenprints in colors Sheet: 35 x 23 inches, each Edition of 100 Each signed, dated and numbered in pencil Contained in original portfolio box
Category

Price Upon Request
Untitled (Boy in a Park)
By KAWS
Located in New York, NY
1999 Offset lithograph in colors on paper Sheet: 14 1/5 x 10 1/5 in. Edition unknown Signed in plate on recto
Category