H 45.67 in. W 31.89 in. D 1.19 in.
Pastel Landscape by Erle Loran #1
By Erle Loran
Located in Pasadena, CA
Framed pastel and ink colorful landscape by artist Erle Loran. It was Cézanne's work that motivated him, which led him on a three-year odyssey through Cézanne's country where Loran p...
Category

H 20.75 in. W 24.6 in. D 1.25 in.
Landscape Pastel by Erle Loran #4
By Erle Loran
Located in Pasadena, CA
Framed pastel and ink colorful landscape by artist Erle Loran, entitled "Old Mining Site". Among Loran's many exhibitions were in 1924 at the Minnesota State Fair; the Museum of M...
Category 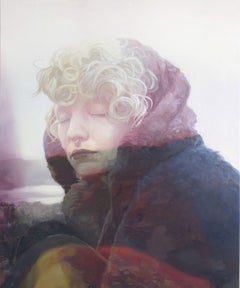 H 30 in. W 36 in.
"Rue Mouffetard, Paris" by Claude Loran
Located in Wiscasset, ME
Expressionist painting by French artist Claude Loran circa 1959 oil on canvas, signed and dated.
Category

H 72 in. W 52 in. D 2 in.
Large, Signed, 1961 Abstract Painting
By Erle Loran
Located in Newport Beach, CA
Vibrant, large, signed and dated, oil-on-canvas painting by listed American artist, Erle Loran (1905-1999). Among Loran's many exhibitions were in 1924 at the Minnesota State Fai...
Category

H 30 in. W 37 in. D 2 in.
Salt Ponds II Abstract
By Erle Loran
Located in Soquel, CA
A bright and colorful abstract interpretation of the Bay Area salt ponds by Erle Loran (American, 1905-1999). Estate stamp on verso. Can be oriented vertically or horizontally. Unfra...
Category

H 53 in. W 61 in. D 2 in.
1980s Abstracted Bay Area Landscape -- Oakland to Tamalpais Views
By Erle Loran
Located in Soquel, CA
Gorgeous colors in this abstract of the sunrise on the bay by Erle Loran (American, 1905-1999), a modernist of urban and coastal views and geometric painting. Signed on verso. From a...
Category

H 14 in. W 17 in. D .10 in.
Oakland to Tamalpais Views - Fauvist Abstracted Landscape
By Erle Loran
Located in Soquel, CA
Colorful abstracted landscape of the Inner Harbor at Alameda and Mount Tamalpais, with towers in the foreground by Erle Loran (American, 1905-1999). Signed upper left on border. Esta...
Category

H 52 in. W 60 in. D 1.50 in.
Salt Ponds Abstract 1
By Erle Loran
Located in Soquel, CA
A bright and colorful abstract interpretation of the Bay Area salt ponds by Erle Loran (American, 1905-1999). Estate stamp on verso. Can be oriented vertically or horizontally. Unfra...
Category

H 60 in. W 52 in. D 2 in.
Summer Mountains, Wyoming Abstracted Landscape
By Erle Loran
Located in Soquel, CA
Bright and vibrant abstracted landscape depicting the Wyoming mountains on a summer day by Erle Loran (American, 1905-1999). From a collection of his works. Estate stamp on verso. Un...
Category

H 60 in. W 52 in. D 2 in.
Mountains and High Desert Abstracted Landscape
By Erle Loran
Located in Soquel, CA
Modernist Abstract painting of the Mountains and John Day Painted Desert in Oregon by Erle Loran (American, 1905-1999). Erle Loran was a modernist of urban and coastal views and geom...
Category

C Loran For Sale on 1stDibs

Surely you’ll find the exact c loran you’re seeking on 1stDibs — we’ve got a vast assortment for sale. There are many Abstract, Modern and Post-Impressionist versions of these works for sale. You’re likely to find the perfect c loran among the distinctive items we have available, which includes versions made as long ago as the 20th Century as well as those made as recently as the 20th Century. If you’re looking to add a c loran to create new energy in an otherwise neutral space in your home, you can find a work on 1stDibs that features elements of gray, blue, beige, black and more. Artworks like these of any era or style can make for thoughtful decor in any space, but a selection from our variety of those made in paint, fabric and canvas can add an especially memorable touch.

How Much is a C Loran?

A c loran can differ in price owing to various characteristics — the average selling price for items in our inventory is $4,125, while the lowest priced sells for $380 and the highest can go for as much as $7,800.

Erle Loran was born in Minneapolis, Minnesota, in 1905. He attended the University of Minnesota for a while before studying at the Minneapolis School of Art, under Cameron Booth, and graduated in 1926. Loran was awarded a traveling scholarship from the Chaloner Foundation (Paris Prize) after graduation and spent the next four years in Europe, living in Cézanne’s studio. Loran had always been fascinated by the work of the artist Paul Cézanne, and it motivated him throughout his life both in his painting and writing. He would later pen several books and articles based on his time spent in what was once Cézanne’s world. Once he returned home, Loran moved to California and began not only painting and continuing his art career, but also took up teaching at the University of California, Berkeley. He served as chairman of the art department from 1952–56 and continued teaching there until his retirement in 1973, where he was awarded a University Citation. Berkeley once again awarded Loran, this time in 1981, declaring him an Emeritus Professor.

During the 1940s, Loran belonged to a group of some 20 artists that produced lithographs for the “Chronicle Contemporary Graphics” project. Around the same time, he published two books (one of which was the successful Cézanne Composition) and two articles in art magazines the following decade. By the late 1960s, Loran had changed focus and began painting more abstract images, fusing Op Art, Pop Art and Hard Edge. Perhaps his new direction was influenced by his time spent in New York learning under the artist Hans Hoffman, an artist from Europe who was heavily interested in bringing modern European techniques and philosophies to America. Loran was eventually hindered by visual impairment but continued painting until about a year before his death. He passed away in Berkeley, California, in 1999.

Painting is an art form that has spanned innumerable cultures, with artists using the medium to tell stories, explore and communicate ideas and express themselves. To bring antique and vintage paintings into your home is to celebrate and share in the long tradition of this discipline.

When we look at paintings, particularly those that originated in the past, we learn about history, other cultures and countries of the world. Like every other work of art, paintings — whether they are contemporary creations or works that were made during the 19th century — can often help us clearly see and understand the world around us in a meaningful and interesting way. Cave walls were the canvases for what were arguably the world’s first landscape paintings, which depict natural scenery through art. Portrait paintings and drawings, which, along with sculpture, were how someone’s appearance was recorded prior to the advent of photography, are at least as old as Ancient Egypt. In the Netherlands, landscapes were a major theme for painters as early as the 1500s. Later, artists in Greece, Rome and elsewhere created vast wall paintings to decorate stately homes, churches and tombs. Today, creating a wall of art is a wonderful way to enhance your space, showcase beautiful pieces and tie an interior design together.

No matter your preference, whether you favor Post-Impressionist paintings, animal paintings, Surrealism, Pop art or another movement or specific period, arranging art on a blank wall allows you to evoke emotions in a room while also showing off your tastes and interests. A symmetrical wall arrangement may comprise a grid of four to six pieces or, for an odd number of works, a horizontal row. Asymmetrical arrangements, which may be small clusters of art or large, salon-style gallery walls, have a more collected and eclectic feel. Download the 1stDibs app, which includes a handy “View on Wall” feature that allows you to see how a particular artwork will look on a particular wall, and read about how to arrange wall art. And if you’re searching for the perfect palette for your interior design project, what better place to turn than to the art world’s masters of color?

On 1stDibs, you’ll find an expansive collection of paintings and other fine art for your home or office. Browse abstract paintings, portrait paintings, paintings by popular artists and more today.