H 53.15 in. W 35.04 in. L 53.94 in.
Burmel Pink "Floral with Multi Floral Border" Rectangle Scarf
By Burmel
Located in New York, NY
Burmel pink "Floral with multi-floral border" rectangle scarf measures 15" x 43", finished with hand-rolled edges. Made of vinyl and silk, and made in Japan.
Category

Me "Floral & Elephants" Scarf
Located in New York, NY
Me &quot;Floral &amp; Elephants&quot; scarf measures 20 1/2&quot; x 20 1/2&quot;. Tiny stain on one corner, but, hardly noticeable. Made of polyester, and made in Italy.
Category 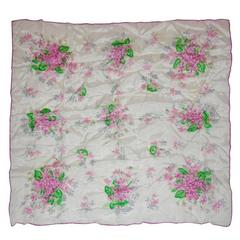 Turquoise Florals Among Jaguar Scarf
Located in New York, NY
Wonderfully vivid, this turquoise with soft yellow highlights jaguars among the jungle. Finished edges and measures 34 inches by 35 inches. Made in Italy, of poly.
Category

Chic 1970's Floral Chloe Silk Scarf
By Chloe
Located in Scottsdale, AZ
Chloe silk scarf in a bright, exciting floral for Spring! Hues of royal blue and turquoise accented with bursts of orange and yellow- this scarf is the perfect pop of color for any o...
Category

Floral Scarves For Sale on 1stDibs

There is a broad range of floral scarves for sale on 1stDibs. Our collection of floral scarves includes a variety of colors, spanning Brown, Gray, Beige and more. Making the right choice when shopping for these accessories may mean looking at versions that date from different eras — you can find early iterations from the 18th Century and newer versions made as recently as the 21st Century, all of which have proven very popular over the years. Floral scarves such as these have likely been a part of the legacy of many fashion designers, but those produced by Gucci, Yves Saint Laurent and Chanel are consistently popular. When shopping for these accessories, you’ll find that there are less available pieces for men or unisex today than there are for women.

Finding the Right Scarves for You