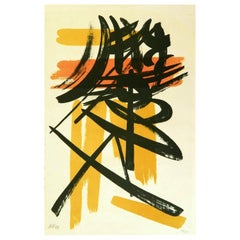 H 36.5 in. W 19.5 in. D 0.1 in.
Mid-Century Modern Framed Hans Hartung Limited Edition Etching Hand Signed 1960s
By Hans Hartung
Located in Keego Harbor, MI
For your consideration is an excellent, framed and hand signed etching, by Hans Hartung, numbered 65/100, circa the 1960s. In excellent vintage condition. The dimensions of the frame...
Category

French Abstract Painting from the 1950s

H 71 in. W 56 in.
Proal Jean, Farandole
By Hans Hartung
Located in Paris, FR
Signed and numbered lower left : Hartung ; 756 This work is recorded under the n°HH3340 in the archives of the Fondation Hartung Bergman. Included in 'Farandole', Hans Hartung, Jea...
Category

H 30.12 in. W 22.64 in. D 0.04 in.
Abstract Lithograph by Hans Hartung, edited by Galerie de France
By Hans Hartung
Located in Chicago, IL
Classically trained, Hartung (1904-1989) became a "Lyrical Abstractionist" in the early 1950's. His work was mostly monochromatic and known for long rhythmical brushstrokes or scrat...
Category

Hans Hartung
No tiltle, 1960 circa

Hartung Hans For Sale on 1stDibs

On 1stDibs, there are several options of hartung hans available for sale. A selection of these works in the Abstract, Modern and Minimalist styles can be found today in our inventory. These items have been produced for many years, with earlier versions available from the 20th Century and newer variations made as recently as the 21st Century. If you’re looking to add a hartung hans that pops against an otherwise neutral space in your home, the works available on 1stDibs include that feature elements of beige, gray, black, brown and more. Hans Hartung took a thoughtful approach to this subject that are worth considering. Each of these unique pieces was handmade with extraordinary care, with artists most often working in lithograph, etching and woodcut print.

How Much are Hartung Hans?

Hans Hartung is commonly presented as a standard-bearer for the École de Paris and the lyrical abstraction and is primarily considered as a post-war painter. Nevertheless, in the late 30s, this German-born artist had already participated in numerous exhibitions throughout Europe. His career began in 1922 at the age of just 18 years, when he didn’t even know the theories of Kandinsky but produced a series of abstract watercolors striking by their sheer expressiveness. This was the beginning of a career that lasted nearly 70 years and was punctuated by constant technical innovations. Paradoxical artist, Hartung was often at the opposite of the image the critics build of him, resulting in a distorted reception (Annie Claustres). Presented as a champion of gestural, lyrical and emotional painting, he remained passionate for mathematics, and his painting was apprehended through its rationality: from the 30s to the late 50s, he first produced small-sized works, spontaneously executed on paper; then he created the painting by laying down a grid and scaling up the small-size paper onto a canvas, referring point by point. The 60s also marked a turning point. Hartung stopped working by reproducing small formats but entered a patient search for technological innovation, including the production of multiple tools. In 1960, he won the grand prize for painting at the Venice Biennale, reaching the top of international recognition. Hartung never stopped creating, paintings with still more ardor until his last days in his property of Antibes that he had designed himself.