H 2 in. W 8 in. D 4 in.
Rimini Blue Bowl by Aldo Londi
By Aldo Londi
Located in New York, NY
Launched in 1959 by expert ceramicist Aldo Londi, the Rimini Blue series, which has been produced for over sixty years by the Manifattura Bitossi, is but one of Bitossi’s numerous cl...
Category 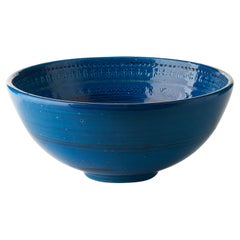 H 26.00 in. Dm 16.00 in.
Rimini Blue Umbrella Stand by Aldo Londi
By Aldo Londi
Located in New York, NY
Launched in 1959 by expert ceramicist Aldo Londi, the Rimini Blue series, which has been produced for over sixty years by the Manifattura Bitossi, is but one of Bitossi’s numerous cl...
Category 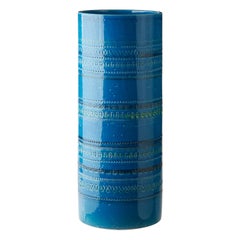 H 35 in. Dm 7 in.
1960's Italian Rimini Blue Floral Glaze Table Lamps
By Bitossi
Located in Las Vegas, NV
Lovely pair of mid century era table lamps. Hand painted floral design in Rimini blue. We believe them to be an Italian artist lamp in the style of Bitossi. Circa 1960's with or...
Category

H 10.24 in. Dm 5.12 in.
Midcentury Rimini Blue Stoneware Vase by Aldo Londi for Bitossi, 1960s
By Aldo Londi
Located in Esbjerg, DK
Aldo Londi designed this partially exposed stoneware vase with the characteristic Rimini blue glaze. It was manufactured in Italy by Bitossi during the 1960s.
Category

Rimini Blue Cat Made of Ceramics by Aldo Londi, 1960

H 20 in. Dm 7.5 in.
Vintage Square Rimini Blue Ceramic Ashtray by Aldo Londi for Bitossi, Italy
By Bitossi, Aldo Londi
Located in Bresso, Lombardy
Italy, 1960s. This ashtray, designed by Aldo Londi and manufactured by Bitossi, is made in Rimini blue glazed ceramic and features 3 cigar or cigarette holders. It is a vintage pi...
Category

H 26 in. W 12 in. D 12 in.
Bitossi Aldo Londi Rimini Blue Ceramic Set of Vase, Ashtray and Candleholder
By Aldo Londi, Bitossi
Located in Barcelona, ES
A beautiful handmade Rimini blue glazed ceramic set of three pieces. Designed by Aldo Londi and manufactured by Bitossi, Italy, 1960s. The set is comprised by a round ashtray, a bott...
Category

H 1.97 in. W 7.45 in. D 5.32 in.
Rimini Blue Pitcher by Aldo Londi for Bitossi
Located in New York, NY
A "Rimini Blu" handled pitcher or carafe by Bitossi and designed by Aldo Londi for Raymor. Made in Florence, Italy, circa 1959. An excceptional, handmade ceramic vessel from the L...
Category

H 5.63 in. W 6.5 in. D 3.88 in.
Large Aldo Londi Rimini Blue Brutalist Vase by Bitossi, Italy, 1960s
By Aldo Londi
Located in Kensington, MD
Classic Italian Brutalist design by famed Italian ceramicist Aldo Londi in his signature Sgraffito style. Can be re-wired as a lamp or stand alone as a striking piece of pottery. ...
Category

Rimini Blue For Sale on 1stDibs

At 1stDibs, there are many versions of the ideal rimini blue for your home. Each rimini blue for sale was constructed with extraordinary care, often using ceramic, pottery and terracotta. Your living room may not be complete without a rimini blue — find older editions for sale from the 20th Century and newer versions made as recently as the 20th Century. When you’re browsing for the right rimini blue, those designed in Mid-Century Modern, Art Deco and Modern styles are of considerable interest. A well-made rimini blue has long been a part of the offerings for many furniture designers and manufacturers, but those produced by Bitossi, Aldo Londi and Raymor are consistently popular.

How Much is a Rimini Blue?