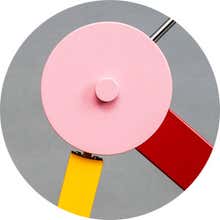 Strictly speaking, postmodern design was a short-lived movement that manifested itself chiefly in Italy and the United States in the early 1980s. Objects produced by postmodern practitioners were characterized by hot-colored, loud-patterned, usually plastic surfaces; strange proportions and weird angles; and a vague-at-best relationship between form and function. Critics derided postmodern design as a grandstanding bid for attention and nothing of consequence. The fact that, decades later, postmodern design still has the power to provoke thoughts (along with other reactions) proves they were not entirely correct.

Postmodernism began as an architectural critique. Starting in the 1960s, a small cadre of mainly American architects began to argue that modernism, once high-minded and even noble in its goals, had become stale, stagnant and blandly corporate. In the next decade in Milan, a cohort of designers led by Ettore Sottsass and Alessandro Mendini brought the discussion to bear on design. Sottsass and Michele de Lucchi, in 1980, gathered a core group of young designers, which would come to include Michael Graves, Marco Zanini, Shiro Kuramata and Matteo Thun, into a design collective they called Memphis. They saw design as a means of communication and they wanted it to shout. That it did: the first Memphis collection appeared in 1981 and broke all the modernist taboos, embracing irony, kitsch, wild ornamentation and bad taste.

Many of the pieces mentioned above formed the core of a 2011 survey of postmodern design at the Victoria & Albert Museum — an exhibition that showed the movement's influence on contemporary design and fashion. That fact, coupled with the works offered on these pages, proves that postmodernism is a movement that continues to inspire.

Memphis Style Side Table, circa 1980s
By Memphis Group, Peter Shire
Located in Palm Springs, CA
A fun and whimsical Memphis style side table in the manner of Peter Shire. This table consist of painted steel with a 23.5" round 1/2" thick glass top, circa 1980s.
Category

Memphis Style Side Table, circa 1980s

Mirror Designed and Signed by Ettore Sottsass, 2007 Made in Italy