André Lhote was born in 1885 and was a French Cubist painter of figure subjects, portraits, landscapes and still life. After initially working in a Fauvist style, Lhote shifted towards Cubism and joined the Section d'Or group in 1912, exhibiting at the Salon de la Section d'Or. He was alongside some of the fathers of modern art, including Albert Gleizes, Jacques Villon, Henri-Robert-Marcel Duchamp, Jean Metzinger, Francis Picabia and Roger de La Fresnaye. Lhote lectured extensively in France and other countries, including Belgium, England, Italy and, from the 50s, also in Egypt and Brazil. In Egypt, Lhote worked with Effat Nagy using Egyptian archaeology as a subject matter for their work. He was rewarded with the Grand Prix National de Peinture for 1955, and the UNESCO commission for sculpture appointed Lhote president of the International Association of Sculptors, Painters and Gravers.

André Lhote Cubist Composition Pen Drawing circa 1910
By André Lhote
Located in Atlanta, GA
Cubist black ink pen drawing by André Lhote (1885 - 1962), circa 1910. A still life composition, a bowl with fruits on a table with a cubist geometric design. We have added photos of...
Category

Bordeaux - Original Etching by A. Lhote- 1926
By André Lhote
Located in Roma, IT
"Bordeaux" is an original print in etching technique on ivory-color paper by A. Lhote. In excellent conditions: As good as new. Container dimension: 40 x 30 cm. Not signed.
Category 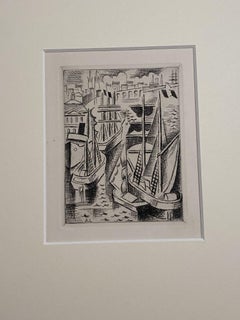 Bordeaux, The Harbor - Original Etching by André Lhote
By André Lhote
Located in Roma, IT
Image dimensions: 13x10 cm. Printed signature in the plate Good conditions. This artwork is shipped from Italy. Under existing legislation, any artwork in Italy created over 70 year...
Category 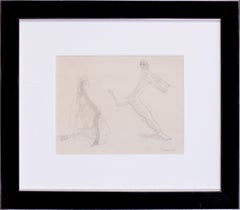 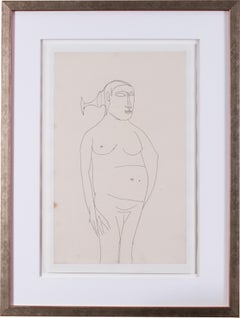 Original Art deco gouache and ink drawing of a nude lady in a hat by Gesmar 1921
By Charles Gesmar
Located in Petworth, GB
Category

Charles Gesmar
Original Art deco gouache and ink drawing of a nude lady in a hat by Gesmar 1921, 1921

H 13 in. W 9.85 in.
Nude
By André Lhote
Located in Marlow, Buckinghamshire
A splendid and eye-catching cubist oil on paper (laid on panel) of a Nude. A great example by this popular artist. Signed lower right. C.1935 André Lhote was a French Cubist pain...
Category

H 13 in. W 9.57 in. D 0.04 in.
Apres de Bain
By André Lhote
Located in Los Angeles, CA
Acquired from a collector who's father bought it from a gallery in NY in 1959, Lhote was alive and working at this time. It is in pristine condition and in the origianll frame.
Category

H 26 in. W 22 in.
Nu Allonge
By André Lhote
Located in Los Angeles, CA
André Lhote 1885-1962 Lhote was born in Bordeaux, France in 1885. He left grade school at age thirteen to become an apprentice at a local sculpture studio while formally studyi...
Category