Andrew Topolski was a Western New York-based intermedia artist whose work was informed by music, visual art, architecture, and science, among other disciplines. Born in Buffalo in 1952, he received his undergraduate and graduate degrees in art from the University at Buffalo. His work consists of various mixed media constructions, series of delicate drawings using powdered graphite, and geometrical sculptures that involve numerical progressions and musical notations. Topolski’s work is multi-faceted in meaning and refers to symbols, the threat of nuclear energy, historic events, the longitude and latitude of personally significant places, and the Periodic Table of Elements. Along with several musical performances, his work has been shown throughout the area, including the Albright Knox, the University at Buffalo, and More-Rubin Gallery. Topolski also performed and exhibited in Germany, Japan, and New York City. Don Metz, the Associate Director of Public Programming at the Burchfield Penney Art Center, wrote the following about his good friend and creative college, Andrew Topolski, "He began creating symbols to interpret sound at a very early age. As a child he suffered a severe stutter. His father encouraged him to draw and thus he began to use drawing as a means of communication. His drawing skills matured quickly and he was able to discover a variety of meanings in his imagery. He developed his drafting skills while still in high school, where he studied art, but had a keen interest in the symbolic language of chemistry, physics, engineering, and music. "Topolski defined his art as 'Intermedia.' Intermedia can best be described as art that falls between, or incorporates more than one medium or discipline, becoming a single work that combines elements of each. Most importantly, each element is designed to stand alone as a single work of art. Topolski first began this process in 1977 when he co-founded the East Buffalo Media Association during his tenure as curator at the Polish community center in Buffalo, New York. The EBMA consisted of composers, musicians, writers, sculptors, and video artists. The term Enjambment was tossed around as the regular practice of fusing various disciplines in performance much in the spirit of Fluxus type happenings. It is here that Topolski begins expressing his viewpoint in ways that would often overlook more formal aesthetic concerns. His objective was a type of harmony or pleasing effect that was produced through an arrangement of visual materials. "Topolski’s use of images for communication and his formal training in music combined with his love of architecture and science caused him to study the natural procession of elements. He was constantly in search of harmony, often relating the development of his work to that of a composer. Finding multiple meanings in visual materials and removing restrictions from their common understanding is at the heart of his aesthetic." 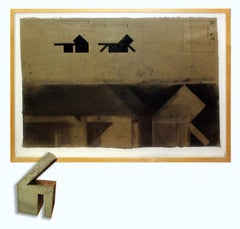 'is this it'
By Alexandra P. Spaulding
Located in Buffalo, NY
Category 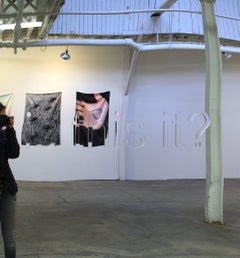