Arthur Kampf was a German history painter, associated with the Düsseldorf school of painting, began study under Peter Janssen, at the Kunstakademie Düsseldorf from 1879–81. After completing his education, he began the professor career and also became a member of the Prussian Academy of Arts, and gave drawing lessons, notably to Prince August Wilhelm, son of Wilhelm II. In 1944, Kampf was one of 24 artists, architects, authors, composers, actors, and singers added to the Special list of the Gottbegnadeten list, meaning he was considered indispensable.  Kampf's work is most strongly associated with the genre of traditional history painting though throughout his lifetime he explored styles influenced by Impressionism and Art Nouveau.

Applied Filters1 result
Artist:Arthur Kampf
to
Item Location
1
Height
to
Width
to
1
1
1
10,790
2,534
2,481
1,927
1
Taubenliebhaber (Pigeon Fanciers) - Original Etching by Arthur Kampf - 1904
By Arthur Kampf
Located in Roma, IT
Taubenliebhaber is a black and white etching on ivory-colored paper, realized by the German artist, Arthur Kampf. Signed and dated on plate on lower left margin. From the portfolio ...
Category 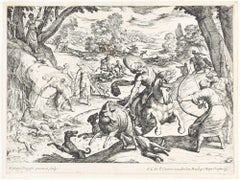 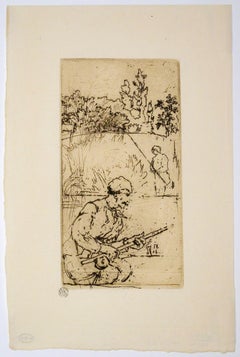 Hemisphere Of The New Continent - Ancient Map by J.G. Heck - 1834.
By Johann Georg Heck
Located in Roma, IT
Category

Statue of Calligola - Original Etching by P. Fontana After B.Nocchi - 1794
By Pietro Fontana
Located in Roma, IT
Category

Heracles with the Club - Original Etching by Anonymous Master 17th Century
Located in Roma, IT
Category