Of the numerous feats that Banksy has accomplished over the course of his career as an international artist, activist and filmmaker, perhaps the most astonishing is that while he is among the most famous figures in street art, he has managed to remain completely anonymous.

There is a method behind the madness, however. Banksy maintains that he chooses to conceal his identity to make a more democratic impact with his work, the themes of which include criticism of world leaders, consumerism and terrorism.

Although not much is known about Banksy — he sent a photo of himself with a paper bag on his head to Time magazine for a profile — it is believed that he was born in the city of Bristol, in southwest England, circa 1974. Wit, irreverence, dark humor and activism come together in his work, which spans graffiti, paintings, prints, sculptures and filmmaking. (His film, Exit Through the Gift Shop, which focuses on another street artist known as Mr. Brainwash, was nominated for Best Documentary Feature at the 2010 Academy Awards.)

Banksy began as a graffiti artist in his hometown in the early 1990s. He has found fame for his stenciled and spray-painted pieces, which are most often rooted in anti-war or antiestablishment messaging, appearing in cities such as London, New York and Los Angeles and for his “stunts” that are intended to subvert and provoke the art world. One particularly memorable stunt took place in 2018, when, as soon as one of his paintings sold at auction — Girl with a Balloon, which fetched an extraordinary $1.4 million — it self-destructed and proceeded to partially shred itself. Banksy even snuck into the Louvre and hung his own version of the Mona Lisa in 2006. Despite his elusive persona and commitment to bringing art to the masses, Banksy is one of the most coveted artists at auctions across the world.

And his work is undeniably impactful.

At a record-breaking auction organized by Damien Hirst, Bono and others to benefit AIDS charities in 2008, Banksy’s Keep It Spotless — a modified Hirst painting — fetched nearly $2 million. In May of 2020, Banksy donated Game Changer, a painting that honors UK healthcare workers, to Southampton General Hospital. When it went to auction in 2021, it sold for more than $23 million at Christie's in London. All proceeds went to the National Health Service.

Dismaland British Flag
By Banksy
Located in Dallas, TX
Banksy piece from Dismaland show. No COAs from this show were given.
Category

Authorized Graffiti Area
By Banksy
Located in Dallas, TX
First Edition Of The Stickers Banksy Made To Post Up In Bristol And London To Encourage Tagging On Otherwise Clean Walls. His First Venture Into The "Fight Club" Style Mayhem And A ...
Category 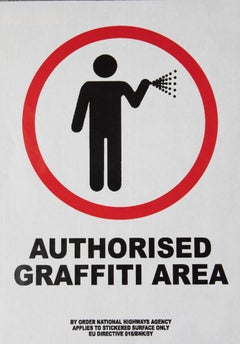 Related Items
Next Step
Located in Dallas, TX
Cédric Kozluk, born in Lyon in 1976, is above all a drawing lover. And it was in 1991 that this love led him to encounter graffiti and its subversive universe. From this encounter is...
Category

H 30 in. W 40 in.
Dismaland British Flag
By Banksy
Located in Dallas, TX
Banksy piece from Dismaland show. No COAs from this show were given.
Category

H 31 in. W 23 in. D .25 in.
If You Listen You Can Hear
Located in Dallas, TX
From Fabbri's Inversion series. Old-School tape recording with classic hits. Backwards letters across the entire canvas repeating, "Feed Your Soul." There is a secret message in each...
Category

Angela Fabbri
If You Listen You Can Hear, 2017

H 40 in. W 40 in.
Sensory Overload
Located in Dallas, TX
From Fabbri's Inversion series. Chimp's with glitter covering alternating eyes, ears and mouth. Backwards letters across the entire canvas repeating, "See no, hear no, speak no." The...
Category

H 36 in. W 60 in.
Authorized Graffiti Area
By Banksy
Located in Dallas, TX
First Edition Of The Stickers Banksy Made To Post Up In Bristol And London To Encourage Tagging On Otherwise Clean Walls. His First Venture Into The "Fight Club" Style Mayhem And A ...
Category

H 18 in. W 12 in.
Rabbit #2
By Ron English
Located in Dallas, TX
Very noticeable piece with a bright pink background contrasted by a grey multi-eyed "rabbit" as the star of the painting.
Category

Banksy art for sale on 1stDibs

1stDibs offers a wide variety of authentic Banksy art available for sale. You can also browse by medium to find Banksy art in lithograph, screen print, offset print and more. Much of this artist's original work was created during the 21st Century and Contemporary, and is mostly associated with the street art style. Not every interior allows for large Banksy art, so small editions measuring 3.940000057220459 inches across are available. Those interested in this artist might also find the work of Mr. Brainwash, Ryan McGinness and Richard Hambleton. On 1stDibs, the price for these items starts at $250 and tops out at $1,800,000, while the average work can sell for $3,082.