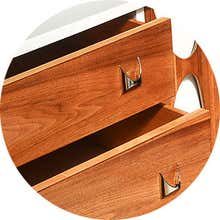 Founded during the 1920s, the Broyhill Furniture Company was one of the stalwart North Carolina makers of mid-priced, traditional wooden furnishings, and it served American families well. The Colonial Revival style — chairs with turned legs, beds with split pediment headboards — had always been the company’s stock in trade. But the vintage Broyhill bedroom furniture, dressers and cabinets of the postwar era are quite popular with today’s fans of mid-century modern design — particularly those who enjoy more flamboyant stylings, such as those of Adrian Pearsall.

For collectors of a certain type, Broyhill is most admired for its brief foray into the contemporary furnishings of the late 1950s and ‘60s. In 1957, responding to changing tastes, the firm launched its Broyhill Premier line with the Sculptra series. Sculptra pieces featured decorative molding with a square-within-a-square motif and horizontal cat’s eye-shaped drawer pulls. Five years later, Broyhill introduced the Brasilia furniture group, inspired by the Oscar Niemeyer architecture for the brand-new Brazilian capital. The collection made its debut at the Seattle World’s Fair.

The cabinet door fronts of vintage Broyhill Brasilia pieces feature moldings based on the sweeping colonnades and parabolic curves of such buildings as the Palácio da Alvorada (“Palace of the Dawn”), the presidential residence. As you will see on 1stDibs, Broyhill created a striking and spirited line of furnishings that will make a happy keynote in any Atomic Age-inspired interior.

Ohio retailer Big Lots acquired the rights to the Broyhill name and related trademarks in 2019.

'Brasilia' by Broyhill Premier Pair of End / Side Tables, Refinished, 1960s
By Broyhill, Broyhill Brasilia
Located in Los Angeles, CA
This gorgeous pair of 'Brasilia' end tables (which also work great as side tables, nightstands or small cabinets) was just refinished and are ready for immediate use. This beautiful ...
Category

Pair of Wood Nightstands by Broyhill, 1970s
By Broyhill
Located in View Park, CA
A pair of Broyhill nightstands with exceptional wood grain, 1970s. Wood is believed to be Douglas Fir. Handles are hand-carved in streamline fashion, with the pull discreetly underne...
Category

Pair of Midcentury Nightstands or End Tables by Broyhill
By Broyhill
Located in Brooklyn, NY
Stylish pair of Mid-Century Modern nightstands or end tables manufactured by Broyhill. Signature brass drawer pulls open dovetail-jointed drawers, a shelf on the bottom of the tables...
Category

Pair of Midcentury Nightstands or End Tables by Broyhill

Broyhill Premier Mid-Century Walnutt Dresser
By Broyhill
Located in palm beach, FL
Classic American made mid-century dresser, by the noted furniture company Broyhill, as part of their premier collection. This example features two banks of drawers, each having an un...
Category

Broyhill Saga Mid-Century Dining Table
By Broyhill
Located in Countryside, IL
Broyhill saga mid-century dining table This table measures: 60.25 wide x 40 deep x 29.75 inches high, with a chair clearance of 24.5 inches All pieces of furniture can be had i...
Category

Broyhill furniture for sale on 1stDibs

Furniture from Broyhill are available for sale on 1stDibs. These distinctive objects are often made of wood and designed with extraordinary care. In our collection of Broyhill furniture there are many options to choose from, although brown editions of this piece are particularly popular. In-stock we have 45 vintage editions of these items, while there is also 0 modern edition to choose from. Many of the original furniture by Broyhill were created in North America during the 20th century in the Mid-Century Modern style. If you are looking for additional options, many customers also consider furniture by Conant Ball, Kipp Stewart & Stewart MacDougall and United Furniture Corporation. Broyhill furniture prices can vary depending on size, time period and other attributes. Price for these items starts at $595 and tops out at $5,800, while pieces like these can sell for $1,995.