Charles Augustus Henry Lutyens was born into an illustrious family with numerous connections to the British Army. His parents, General Charles Lutyens and Frances Jane Fludger. His father was appointed Deputy Commissary General of the Army, a civilian appointment responsible for military procurement. He also served on the staff of General Moore in the Peninsular Campaign and wrote an impressive journal recording the horrors of the ill-fated Retreat on Corunna, escaping from Napoleon’s General Marshall Soult. Charles Lutyens spent his early adult life in the Army, joining the 20th foot and sailed with them in 1850 to serve in Canada. In 1857, he left the army to take up life as a professional artist. He based himself at Onslow Square, London where he soon established a fashionable practice. During this period, Lutyens became a friend of Sir Edwin Landseer, and after him, he named his son in 1863. His patrons included the Duchess of Montrose, Lord Bradford and the Duke of Portland. A companion painting to this was sold by Brightwells in 2018. He was an inventory officer serving in the 20th foot (which became The Lancashire Fusiliers), an artillery officer and later a sculptor, a painter of portraits, animals (particularly horses) and sporting scenes such as racing and hunting. Lutyens exhibited between 1861 and 1903 at the Royal Academy of Arts, Royal Institute of Painters in Water Colors, British Institution, Grosvenor Gallery, Dudley Museum & Art Gallery, Royal Hibernian Academy Gallery, Manchester Art Gallery and the Royal Society of British Artists. 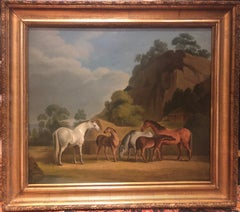 Daniel Clowes
19th Century Oil painting of horses - Mares and Foals in a Landscape, circa 1810

André Prevot-Valeri
Idyllic Landscape Oil Painting of Sheep Grazing with a Shepherd, circa 1920

18th Century Oil Painting of Horse and his master - Hunter and Huntsman
By Charles Towne
Located in London, GB
Category

H 32.5 in. W 52.5 in.
A Pair Of Cherubs
By Charles Augustus Henry Lutyens
Located in Brecon, Powys
A pair of very beautiful Mid-Victorian Cherubs/Cupids painted by this listed and well collected British Artist. His works pass through the major London auction houses and he exhibite...
Category

Charles Augustus Henry Lutyens
A Pair Of Cherubs , circa 1860