Charles Quest, a successful artist, and fine art instructor, worked in a variety of mediums including mosaic, stained glass, mural painting, and sculpture, but remains best known as a printmaker. Quest grew up in St. Louis, his talent evident as a teenager when he began copying the works of masters such as Michelangelo on his bedroom walls. He studied at the Sam Fox School of Design & Visual Arts at Washington University where he later taught from 1944–71. He traveled to Europe after his graduation in 1929, and studied at the Académie de la Grande Chaumière and Académie Colarossi, Paris, continuing to draw inspiration from the works of the Old Masters. After returning to St. Louis, Quest received several commissions to paint murals in public buildings, schools, and churches, including one from Joseph Cardinal Ritter to paint a replica of Velázquez's Crucifixion over the main altar of the Old Cathedral in St. Louis.

Quest soon became interested in the woodcut medium which he apparently learned through his study of J. J. Lankes' A Woodcut Manual (1932) and Paul Landacre's articles in the American Artist magazine since no artists in St. Louis were working in wood at that time. Quest also revealed that for him, woodcutting and engraving were ‘more enjoyable than any other means of expression.’ In the late 1940s, his graphic works began attracting a lot of critical attention — several of his woodcuts won prizes and were acquired by major American and European museums. His wood engraving entitled Lovers was included in the American Federation of Art's traveling print exhibition in 1947. Two years later Quest's two prize-winning prints, Still Life with Grindstone and Break Forth into Singing were exhibited in major American museums in a traveling show organized by the Philadelphia Print Club. His work was included in the Chicago Art Institute's exhibition, Woodcut Through Six Centuries and the print Still Life with Vise, which was purchased by the Museum of Modern Art in New York. In 1951, he was invited by artist-curator Jacob Kainen to exhibit 30 wood engravings and color woodcuts in the Graphic Arts Division of the Smithsonian's National Museum (now known as the American History Museum). This one-man exhibition was a remarkable achievement for Quest, who had been working in the medium for only about 10 years.

In the press release for the show, Kainen praised the ‘technical refinement’ of Quest's work. “He obtains a great variety of textural effects through the use of the graver, and these dense or transparent grays are set off against whites or blacks to achieve sparkling results. His work has the handsome qualities characteristic of the craftsman and designer,” noted Kainen. At the time of the Smithsonian exhibition, Quest's work was represented by three New York galleries in addition to one in his hometown. He had also won 38 prizes, and his prints were in the collections of the Library of Congress, the Art Institute of Chicago, the Metropolitan Museum and the Philadelphia Museum of Art. In cooperation with the Art in Embassies program, his color woodcuts were displayed at the American Embassy in Paris in 1951. Recognition at home came in 1955 with his first solo exhibition in St. Louis. Press coverage of the show heralded the growth of graphic arts toward rivaling painting and sculpture as a major independent medium.

Quest retired from teaching in 1971 and made relatively few prints in his later years, as the rigors of the medium were too demanding. He moved to Tryon, North Carolina, with his wife Dorothy, an artist and portrait painter, and remained active as a painter until he died in 1993. An exhibition of his prints at the Bethesda Art Gallery in 1983 attracted the interest of Curator Emeritus Joseph A. Haller, S. J., who began purchasing his work for the University's collection. In 1990, Georgetown University Library's Special Collections Division became the grateful recipient of a large body of Quest's work including prints, drawings, paintings, sculpture, and stained glass, as well as his archive of correspondence and professional memorabilia. These extensive holdings, including some 260 of his fine prints, provide a rich opportunity for further study and appreciation of this versatile and not-to-be-forgotten mid-Western American artist of the 20th century. 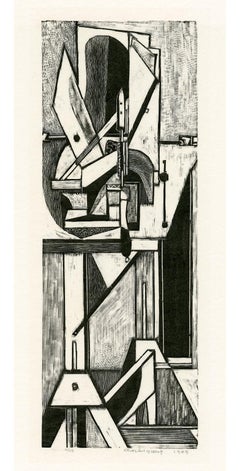 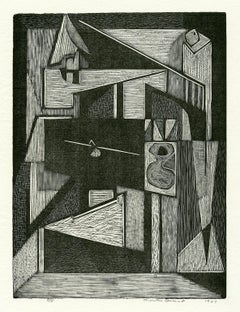 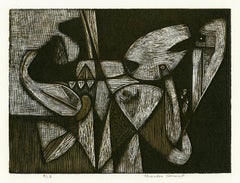