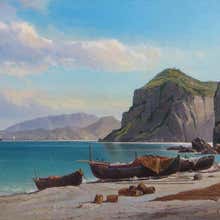 Charles Temple Dix was born in Albany, New York, the youngest son of the distinguished statesman and soldier, General John Adams Dix. Having already visited Europe as a child, Dix returned with his family to Italy from 1853 to 1855. Dix’s decision to become an artist was enthusiastically supported by his father, and after graduation from Union College, Schenectady, New York, Dix continued his art studies in New York City in the late 1850s. Dix quickly immersed himself in the New York art world. He occupied a studio at the famous Tenth Street Studio building from 1860 to 1862, and he exhibited annually at the National Academy of Design, New York, from 1857 to 1861, the year in which he was elected an associate of that institution. He never submitted the diploma painting required for qualification as a full member.

Following the outbreak of the Civil War, Dix joined the Union army, serving as a major and acting as his father’s aide-de-camp. His creative output during this period was curtailed by his involvement in wartime activities. In March 1865, at the close of the war, Dix resumed his artistic career. He left for Europe, spending the winter in Rome and visiting England sometime thereafter. It appears that he remained for at least some time, for in 1867 he exhibited at the Royal Academy, London. In 1868, he married Camilla Ottilie Watson, niece of the art historian, Mrs. Anne Brownell Jameson, in London, and the married couple soon settled in Rome. In January 1873, Dix joined other American artists in Rome in signing a resolution mourning the death of the much-admired Hudson River School painter, John F. Kensett. Dix’s brief period in Rome ended two months later, when he died at the age of 35 of a sudden hemorrhage of the lungs.

In the course of his short and promising career, Dix had established himself as a popular and successful painter of marine subjects, and he was one of the few such painters to elicit praise regularly from contemporary critics. In his Book of the Artists (1867), Henry Tuckerman called Dix a painter “of rare promise and no inconsiderable performance in the sphere of marine landscape” (p. 552), an unfortunately ironic forecast of the artist’s brief career.

Beginning about 1866, when he first wintered in Rome, Dix painted a number of marine subjects of the island of Capri. Marina Grand, Capri dates from that winter, before Dix’s trip to England and his subsequent marriage and relocation to Rome. Dix evidently traveled to the island, returning to Rome with sketches of its coastal scenery. Located on the northern side of the island, the Marina Grande was the chief port on Capri. Dix frames the composition at right with the large, rocky cliffs characteristic of Capri’s coastline, while the sweep of the water opens to the left. Dix’s use of color is deep and clear, faithfully capturing the incomparable range of blues of the Mediterranean sea and sky. All of the elements of the picture—rocks, clouds, boats, and water—are treated with careful accuracy, reflecting a truth-to-nature aesthetic as espoused by the influential English critic, John Ruskin, and echoing similar concerns with the rocky coast landscape as fellow American marine artist, William Stanley Haseltine. Marina Grande, Capri is remarkable in that the artist was only 28 years old when he painted it, and it leads one to speculate as to what Dix might have accomplished had he enjoyed a longer life and career. 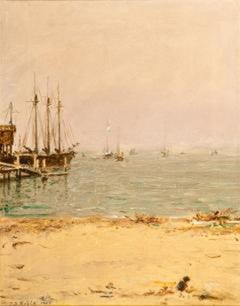 At the Spring
By Joshua Shaw
Located in New York, NY
Category

Chestnut Racehorse with a Jockey Up On a Training Strap
By Henry H. Cross
Located in New York, NY
Category

Houses in a Valley
By Carl Wuermer
Located in New York, NY
Category

Carl Wuermer
Houses in a Valley

Figure in a Landscape
By David Johnson
Located in New York, NY
Category

David Johnson
Figure in a Landscape , 1865