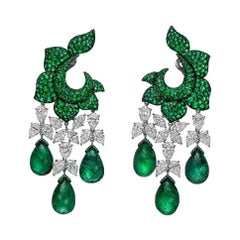 De Grisogono Instrumento No. Uno 18k Rose Gold Watch UNO DF
By de GRISOGONO
Located in Southampton, PA
A limited-edition unisex watch with a multilayered Mother-of-Pearl dial and a genuine black diamond on the crown. Truly a must-have for any watch collector, this piece features a 34...
Category

Free Shipping
De Grisogono Boule Earrings with Ruby and Diamonds
By de GRISOGONO
Located in Miami, FL
A pair of ruby and diamond dangling earrings signed de GRISOGONO circa 1990. The iconic Boule earrings created by the famous house of jewelry are composed of a half ball of black dia...
Category