Early in his artistic career, Doel Reed knew he wanted to be a printmaker. Influenced by Goya's aquatints, he extended himself beyond his formal art training to learn this technique, and he established himself as one of its masters. For decades, he devoted himself to the art program at the University of Oklahoma, taking it from a faculty of one to a major mid-Western department. Upon retirement, Reed focused totally on his work, moving with his family to Taos, New Mexico, where they had previously summered. Marked by strong tonal contrasts, his landscapes of this region are deeply emotional renderings with a sense of mystery — Modernist forms combined with romantic moodiness. Born and raised in Indiana, Reed originally studied architecture, which he credits with lifelong attention to "how something is constructed." His mature style can be characterized as architectonic in his concern with assembling volumes and planes. Even the intense northern New Mexico light becomes the means to articulate three-dimensional patterns into cubistic interplay. When painting, Reed used thick strokes of oil and casein as another structural element. Transferring to fine art, his studies at the Art Academy of Cincinnati were then interrupted by military service in World War I. Suffering a gas attack in the trenches of France, Reed spent months in a hospital temporarily blinded. The effects of the gas also damaged his lungs, which later prompted him to live in the dry climates of Oklahoma and New Mexico. After the war, he returned to his studies, but it was the discovery of Goya's aquatints rather than his art classes that inspired. Considered the master, Goya drew on the tonal range available with this medium to create powerfully haunting imagery. Perhaps Reed responded personally to the eloquent series "The Disasters of War." Now his course was set, and he built his etching press, which he continued to use for the rest of his life. In 1924, he accepted a teaching position at Oklahoma State University, where he remained for 35 years. Emphasizing drawing, Reed encouraged students to go to nature and translate the scene through their sensibilities. Beginning as the sole art professor, he developed the program when it became an independent department in 1930. Through his stewardship, the university gained a reputation as one of the best for printmaking in the country. During the 40s, Reed also prepared a series of lectures and demonstrations on aquatint for the Association of American Colleges and Universities. His most public offering in art education is the book, "Doel Reed Makes An Aquatint" (1965). Sabbaticals allowed him to visit Paris in 1926 and 1930–31. Summer travel took him to Nova Scotia and Mexico, but gas rationing during World War II necessitated a closer destination. Thus the Reed connection with Taos was established. Finally, in 1959, he, his wife, and daughter moved there to Talpa Ridge, the same outlying area in which artists like Andrew Dasburg, Howard Cook and Barbara Latham resided. Settling into a complex of three adobe buildings, Reed was welcomed by these artists, who referred to their community as the Neurosis Ridge. Rena Rosenquist of Mission Gallery remembers that Reed was "the most affable man" who liked cold martinis. For Reed, the surrounding Sangre de Cristo Mountains offered "end of abstract pattern." His inventive mind came up with techniques to transform a natural scene into a richly dimensional object. He fashioned a rosin box and concocted his formula of etching ground to achieve a velvety texture with his prints. Described as "not for the faint-hearted,” casein became a medium with which built up paint surfaces that almost seem sculpted. Both the prints and drawings are characterized by a tension between the two-dimensional surface pattern and the articulated space it conveys. In addition to landscapes, Reed produced several works of voluptuous women with the figures echoing landscape elements. As a boy, his first art experience was a grade-school field trip to the John Herron Art Museum (now the Indianapolis Art Museum), where he expressed his admiration for a painting of a nude mermaid, an image that made a lasting impression. Reed was proudest of his recognition by the National Academy of Design (now just the National Academy). In 1942, he was named associate member; in 1952, he was named full academician. 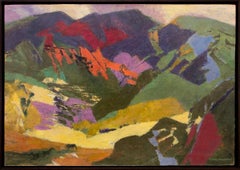