Eliot Candee Clark was a precocious artist who became a landscape painter in the late American Impressionist style. Moving to Albemarle, Virginia in 1932, he was one of the few Impressionist artists of the Southern states. Likely this was a result of his association with James Whistler and his painting in 1900 at Gloucester, Massachusetts with John Twachtman, a family friend. Showing his obvious interest in Impressionism, he wrote a book about its exponents including Twachtman, Theodore Robinson, Childe Hassam, Julian Weir and Robert Vonnoh. Clark was a teacher at the National Arts Club from 1943, the Art Students League and New York City College. Early in his youth, Clark traveled with his father and other prominent artists to paint in the summer art colonies at Annisquam, Gloucester, Chadd's Ford and Ogunquit, where he met artists of stature such as Edward Potthast and John Henry Twachtman. Clark's only formal instruction was a short two months at the Art Students League in New York. His landscapes evoked a spiritualized rendition of nature that was to stay with him for the rest of his life. Clark (perhaps related to his mother's interest in physic phenomena) developed an early interest in oriental philosophy that ended up having a major effect on his artistic development, the sense of spirituality in his landscape paintings slowly grew in importance. Clark was educated in the New York public schools, and at age 13 exhibited with the National Academy and the New York WaterColor Club.

By 1912, he had won national painting awards, and by 1916 was writing books on American artists as well as the history of the National Academy of Design. In his early years, Clark was privately tutored, and then later graduated from Washington Irving High School at the early age of 15. Although he later was quoted as saying he had no formal training from his father, his early work was notably influenced by Walter Clark's tonalist style. Between 1904–06, Clark studied in France in Paris and Giverny, and in London, he saw the impressionist work of James Whistler. He wrote to his father about the Whistler Exhibit stating that some of Whistler's work impressed him, not so much in the handling, but in the use of color, and subtle arrangement of line and balance of masses. He engaged in a walking tour of Europe with a fellow artist whom he met in Paris earlier. They visited many of the major galleries in Holland and then traveled through the Alps, finally reaching Venice on August 10, 1906. In Venice, Clark produced some Whistlerian style pastels similar to the ones he had seen in the Whistler Exhibition. He returned to New York in 1906, and a year later took a studio in the Van Dyke Studio Building on Eighth Avenue. There, working in the building, were a diversified group of painters such as the Tonalist artists Bruce Crane and Cullan Yates, the Impressionists were represented by Edward Dufner and Karl Anderson. In 1912, he painted at the Grand Canyon, in New Mexico, the Painted Desert and northern Arizona, and in 1913, he was in California, painting in Yosemite. In the 1920s and 1930s, he again painted landscapes in the Southwest including Arizona Painted Desert in 1926 and 1935.

From 1922–32, he lived primarily in Kent, Connecticut along the Housatonic river with such notable impressionist painters as Robert Nesbet and G. Glenn Newell. In 1932, Clark moved to Albemarle County Virginia to escape from a bitter divorce with his first wife. This led to a dark time for Clark who opted to travel abroad to find himself again rather than take the security of a teaching position, which was offered to him by the University of Georgia. Because of his interest in eastern philosophy, he traveled in the late 1930s to India for two years, where he painted the Himalayas and also to Tibet. He also painted in the Deep South in Charleston and Savannah, where he set up his easel on the waterfronts and among oak groves.

In 1944, rejuvenated by a second marriage and election to the National Academy of Design, Clark returned to the Connecticut countryside to paint landscapes. In the late 1940s, Clark began to summer in Virginia, where he ultimately returned for good in 1959, settling with his new wife in the lovely hills near Albemarle, Virginia. Clark continued to paint almost to the end of his life, enjoying the solitude and peace of the surrounding environment, where he could relate to canvas the subtleties of nature as only he could. He was elected an associate member of the National Academy of Design in 1917 and a full academician in 1944. He was also president of the National Academy from 1956–59. Clark passed away in 1980.

(Biography provided by Lagamina Fine Art)
Applied Filters1 result
Artist:Eliot Clark
to
Item Location
1
Height
to
Width
to
1
1
1
9,948
2,538
2,418
1,864
1
1
1
1
Moonlight and Mist
By Eliot Clark
Located in Greenville, DE
New York City artist Eliot Candee Clark was well known for his impressionist landscapes. He was the son of painter Walter Clark. Many of his paintings show the influence of his assoc...
Category 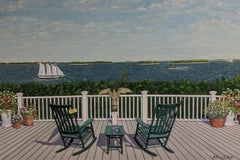 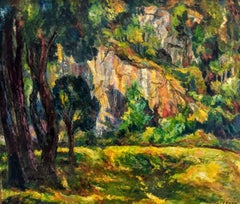 The Twins in the Field
By James Wells Champney
Located in Greenville, DE
Category

James Wells Champney
The Twins in the Field

Eliot Clark
Evening over the Virginia Blue Ridge, Circa: 1945