Helen Hyde was a printmaker and illustrator, born in Lima, New York, but spent a cultured childhood in Oakland, California. At 12, she began art instruction under Ferdinand Richardt, but it ended abruptly two years later when her father died and her family resettled in San Francisco. Hyde and her mother moved to Philadelphia, and after she graduated from Wellesley School, she returned to San Francisco and studied at the School of Design. Hyde studied briefly at the Art Students League in New York between 1888–89. The following year she departed on a four-year sojourn in Europe, which included studying with Franz Skarbina in Berlin, Rafael Collins and Albert Sterner in Paris, and months in Holland and England. In Paris, Hyde met Félix Régamey, who introduced her to the "loveliness of things Japanese" and this meeting was to have a profound effect on her life and work. Returning to San Francisco, Hyde sought out subjects in Chinatown and produced her first series of color etchings. In 1899, Hyde voyaged to Japan, where she became an ardent student of the Japanese language and a student of classical brush painting with an Austrian artist working in Tokyo, and it was from him that she learned the skills of carving woodblocks. She eventually accepted the Japanese system of divided labor and employed Japanese carvers and printers (Shohiro Murata carved her woodcuts for eleven years). Japan was Hyde's home until 1914 when she returned to the United States due to ill health. Hyde exhibited both nationally and internationally and her work won honors in Japan. She was awarded the gold medal at the Alaska-Yukon-Pacific Exhibition in Seattle in 1909 and the bronze medal for woodcut at the Panama-Pacific International Exposition in 1915. Hyde was a member of the Chicago Society of Etchers, the Printmakers Society of California, the Chicago Society of Artists and a life member of the Société de la Gravure en Couleur.

Her Bit.
By Helen Hyde
Located in Storrs, CT
Category 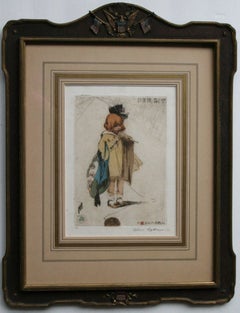 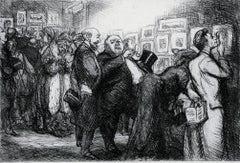 The Box at 'Faustus'
By Diana Thorne
Located in Storrs, CT
Category

The Glow of the City.
By Martin Lewis
Located in Storrs, CT
Category

Christmas from the Gorslines
By Douglas Gorsline
Located in Storrs, CT
Category

Douglas Gorsline
Christmas from the Gorslines, 1942

H 14.57 in. W 6.5 in.
The Sauce-Pan Shop or The Sampan House of Soochow
By Helen Hyde
Located in Fairlawn, OH
Signed by the artist in pencil on the image. Bibliography: Tim Mason and Lynn Mason, Helen Hyde (Washington D.C.: Smithsonian Institution Press, 1991),, 79, reproduced in color p...
Category

Helen Hyde
The Sauce-Pan Shop or The Sampan House of Soochow, 1908