Jim Bird was a well known abstract painter and printmaker. He was born in Bloxwich, West Midlands. He had over 100 one-man shows and exhibited widely throughout the world, including at Galeria Joan Prats, Barcelona; the Art Package, Chicago; Redfern Gallery, London; River Gallery, Westport; Goldman-Kraft Gallery, Chicago; Lucy Berman Gallery, Palo Alto; and Gallery Art Alpha, Tokyo. He also showed at the Basel Art Fair, the International Navy Pier Exposition in Chicago and the International Print Biennale, England. His work was featured in the Journal of Art Illustrated (June, July, August 1991) in an article entitled “The Elusive Monotype: Painting or Print?" and, in 1994, his work was featured in the first issue of Graven Images: Studies in Culture, Law, and the Sacred, published by the University of Wisconsin Law School.

In 1962, Bird left a successful design studio in England to live as an artist in Spain. He soon became affiliated with Galeria Joan Prats, one of the most prestigious galleries in Spain. After coming to the U.S. in 1980, one of the first people Bird looked up was Robert Motherwell. He and Motherwell became friends and exhibited their work together both in Spain and the U.S. Bird's works frequently depict what he calls “Landscapes of the Mind,” most often keyed to his memories and feelings about Spain, but all concerned with the space in which the human spirit creates to discover its freedom. As Bird said in a 1990 essay for a show at Galeria Joan Prats, his longtime dealer, "If one accepts the premise that art can be the mirror within which we may see ourselves, then the quest should be to get the glass true. The problem is that it never is quite true and the image we see is distorted; but before dismissing one mirror for another, judgment should be suspended, as mostly the unconscious reach is greater than the conscious grasp. It is obvious that great art has its source at some point beyond conscious striving, and if this fount is to become accessible it requires an act of faith on the part of the artist to do “nothing” and to allow the dreaming and fantasizing, that least understood part of the creative endeavor, to take place, the space in which the wretchedness of the human condition is re-composed and put into an acceptable form." 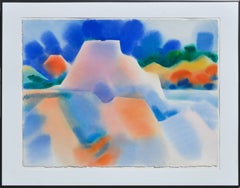 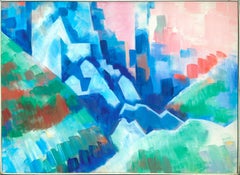