African American folk artist, John Willard Banks was a black self-taught artist. He was the son of Charlie and Cora Lee Banks and was born on November 7, 1912, near Seguin, Texas. At the age of five, his parents took him to San Antonio, where he attended Holy Redeemer School. At the age of nine, his parents got divorced and John returned to his grandparents' farm near Seguin. From childhood Banks' favorite pastime was drawing pictures on his Big Chief tablet. While helping out on his grandparents' farm, Banks completed the 10th grade before striking out on his own. His favorite activities during his youth were singing in a gospel quartet and playing baseball. In his adult years, he worked in oilfields and cotton fields, drove a truck and tended a San Antonio service station. During World War II. he joined the army where he held the rank of sergeant and was stationed in the Philippines. After the war, he returned to San Antonio, where he worked as a custodian at Kelly Air Force Base, at Fort Sam Houston and at a local television station. Banks married Edna Mae Mitchell in 1928 and they had five children. The marriage ended in divorce around 1960. In 1963, he married Earlie Smith. His art career began in 1978 while he was recuperating from an illness for which he had been hospitalized. Banks' wife admired her husband's drawings and secretly took several of them to a San Antonio laundromat. There she hung the drawings on the wall, offering them for sale at the price of fourteen dollars. They were purchased and taken to a gallery for framing. Quite by chance, a San Antonio physician and collector of works of art by black artists saw one of the drawings in the gallery. He telephoned Banks and arranged for a meeting to see his other works. The physician and his wife became friends with John and Earlie Banks and began to advise them on Banks's art career. Banks' first solo exhibition was held at Caroline Lee Gallery in San Antonio in 1984 when Banks was 72 years old. Subsequently, he had a dual exhibition with fellow Texas artist George White at Objects Gallery in San Antonio and was shown in the Southwest Ethnic Arts Society's inaugural exhibition of black artists in San Antonio, where he won a prize. He was included in two traveling exhibitions, “Handmade and Heartfelt” organized by Laguna Gloria Art Museum and Texas Folklife Resources in 1987 and “Rambling on My Mind: Black Folk Art of the Southwest” organized by the National Museum of African American History and Culture in Dallas in 1987. Also in 1987, he was included in a dual exhibition with fellow San Antonio artist John Coleman at the O'Connor Gallery in the McNamara House Museum, Victoria and in 1989 he was one of the six artists included in the traveling exhibition “Black History/Black Vision: The Visionary Image in Texas” organized by the Archer M. Huntington Art Gallery at The University of Texas. Also in 1989, Banks was included in the exhibition “Innate Creativity: Five Black Texas Folk Artists” sponsored by the National Museum of African American History and Culture held at the Dallas Public Library. Banks developed a distinct style, outlining figures in pencil or ballpoint pen and shading them in with colored pencils, crayons and felt-tipped marker. Sometimes his art was influenced by his early, rural memories, including scenes of baptisms, church meetings, hog killings, funerals and Juneteenth celebrations. These works serve as excellent documents of black life in early twentieth-century Texas. At other times, Banks' work was the result of an inner vision that led him to such revelations as his Second Coming of Christ, in which he drew his view of the activities man might be found engaging if Christ should return today. Whether his subjects were religious or rural, they took place in lush landscapes, often with tree-lined rivers flowing through the composition. He did a series of African scenes drawn from his imagination, in which he depicted idyllic villages where communal activities took place. Often they included references to the bounty of nature and the virtue of working together toward a common goal. In other pictures, Banks told more somber stories, of slave auctions and inner-city ghetto scenes. Through the facial expressions and gestures of the figures, Banks revealed their psychological states and personalities. The book Folk Art In Texas has an extensive article written about Johnny Banks. When Banks died in San Antonio on April 14, 1988, he left behind several hundred drawings. 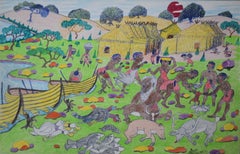 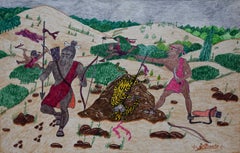 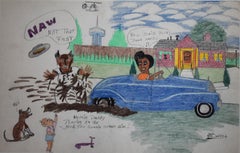 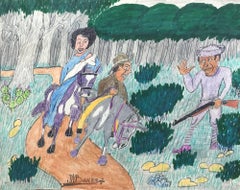 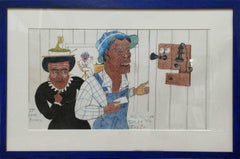 Psalm 121:1 "I will lift up mine eyes unto the hills" Texas Artist San Antonio
By Margaret Putnam
Located in San Antonio, TX
Category

Margaret Putnam
Psalm 121:1 "I will lift up mine eyes unto the hills" Texas Artist San Antonio, Circa 1960s

richard-johnson-1
"LATTICE ROSE" LOVELY LADY IN A GARDEN., Circa 1990