Joseph Capozio was born in Philadelphia in 1927, where his early interests were divided between Art and Music. After serving in World War II, he studied at the Cannon School of Fine Arts in Philadelphia and spent many summers painting in Marblehead, Massachusetts. He also studied in New York and later traveled and painted extensively in Italy, Switzerland and France. The rhythmic quality of Capozio's spirit is brilliantly reflected in all his work. There is always evidence of the disciplined draughtsman who gives loving attention to detail, and at the same time, can burst into rhythmic spontaneity. Although primarily a fine artist, he also worked as a textile designer, illustrator and furniture designer. His paintings have been represented at the Newman Gallery in Philadelphia, Maxwell Galleries in San Francisco and many other galleries on the West Coast, with exclusive collections throughout the United States. In 1955, Capozio and his family moved to San Francisco's North Beach, where he devoted all his time to art and Eastern philosophy. Once a practitioner of Yoga at the Baptiste Institute in San Francisco, he was also a lead male dancer in the Magana Baptiste East Indian Dance Troupe. Eventually, he and his wife, Stevie, made a move to the east to open their gallery on Lake Placid in New York. 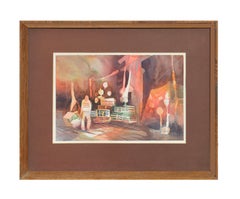 Silhouette of a Couple at Sunset
By Allie William Skelton
Located in Soquel, CA
Category

Allie William Skelton
Silhouette of a Couple at Sunset, 1970s-1980s