Julio Larraz was born in Havana, Cuba, March 12, 1944. The son of a newspaper editor, he began drawing at an early age. In 1961 his whole family moved to Miami, Florida. In 1962 they moved again to Washington DC, and in 1964 to New York. There he started drawing political cartoons which were published by the New York Times, Washington Post, Chicago Tribune and Vogue, among others.

In 1967 Larraz began working full-time as a professional painter. He credits several New York artists, such as Burt Silverman, for teaching him different painting techniques. In 1971 his first individual show was staged at the Pyramid Gallery in Washington DC. In 1972 he carries out an exhibition at the New School for Social Research in New York and in 1973 another one with the FAR Gallery, also in New York.

In 1976 he is awarded by the American Academy of Arts and Letters and the National Institute of Arts and Letters. The same year he is also granted a Cintas scholarship by the International Institute of Education.
A year later Larraz moves to San Patricio, New Mexico, fascinated by the light and atmosphere of the Valle Hondo arid hills. There he meets Ron Hall, who was his gallerist for several years in Dallas, Texas. Ron Hall would become one of his closest friends. In 1983 he travels to Paris, where he stays for two years. The new environment inspires an innovation in his paintings.

While in Paris, Larraz also travels to Morocco. In 1984, he moves back to the United States.

In 1983 he meets Nohra Haime, whose New York gallery represents him until 1994. In 1998 he began working with the Marlborough Gallery of New York, his exclusive representative for the last fifteen years. Larraz moves to Florence, Italy, in 2000, staying there until 2004. Once again, the place offers him a renewed source of inspiration. In 2004, Larraz begins an association with the Galleria D’Arte Contini in Italy, which was bound to be a deep professional and friendly relationship that remains until the present day. Larraz is a frequent visitor of Italy and in 2006 he produced several monumental sculptures which were exhibited in Pietrasanta.

Julio Larraz is renowned for the accuracy and painstakingness of his technique, his imagination and subtlety of touch. Today, his work appears more consolidated than ever. It has become more concise and suggestive, both in the brushstrokes revealing the dexterity of a maestro of painting and in the metaphoric flight of his subjects.

Julio Larraz
Give My Regards To Broadway 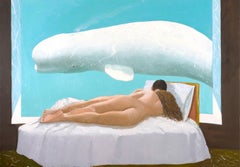 Julio Larraz
Once Upon a Time

Sunday on the Narragansett
By Julio Larraz
Located in New York, NY
Category

Julio Larraz
Sunday on the Narragansett

THIS PIECE IS MINE
By Julio Larraz
Located in New York, NY
Sepia Aquatint. Edition 15/25 slice of watermelon on a table
Category

Julio Larraz
THIS PIECE IS MINE, 1981

HURRICANE SEASON
By Julio Larraz
Located in New York, NY
color monotype of a hurricane lamp in an open window by the sea
Category

CHAMBERED NAUTILUS
By Julio Larraz
Located in New York, NY
Etching, aquatint and sugarlift print of a Still-Life on a table. Edition of 100.
Category

This Piece is Mine
By Julio Larraz
Located in New York, NY
Julio Larraz was born in Havana, Cuba, on March 12, 1944. In 1961 his parents moved to Miami, Florida, taking the whole family with them. In 1962 they moved to Washington, D.C., and ...
Category

Julio Larraz
This Piece is Mine, 1978

Give My Regards To Broadway
By Julio Larraz
Located in New York, NY
ABOUT THIS PIECE: Julio Larraz is an expert draftsman, adroitly sketching his subjects and enlivening them with vibrant color. Larraz is recognized for his precise and detailed techn...
Category

Julio Larraz
Give My Regards To Broadway