Maurice Estève was born May 2, 1904 in Culan in the Cher where he spent his childhood with his grandparents. He joined them in 1913 in Paris, where he discovered the Louvre Museum (he is particularly impressed by the Battle of San Romano by Paolo Ucello). Returning to Culan for the summer, he stayed there during the war years, began painting as early as 1915. He lived in Paris again from 1918. Apprentice to a typographer then to a modern furniture design studio, he followed Drawing evening class, discovers in 1919 the painting of Cézanne.

Back in Paris he attended Montparnasse the free workshop of the Academy Colarossi. Marked until then by the painting of the Primitives and the work of Cézanne, it passed temporarily in 1927 the influence of surrealism, including Giorgio de Chirico. He presents his first solo exhibition in 1930 before becoming interested in film and directing. On the advice of Braque who participates, he is asked in 1936 to exhibit in Stockholm with Matisse, Picasso, Juan Gris and Fernand Léger. He participated the following year in the realization of the wall decorations of Robert and Sonia Delaunay for the pavilions of the Aviation and Railways at the Universal Exhibition of Paris.

Estève, who works regularly during the summer in Culan, makes lithographs, regularly practices watercolor but also charcoal, monotype, collage. In 1970, he received the Grand Prix National des Arts. From 1981 are organized several retrospectives of his work. The City of Bourges decided to present all the works (more than a hundred) which the painter donated to him in 1985 in the Hotel des Echevins, restored with the assistance of the Historic Monuments and the Direction of the Museums of France to become the "Estève Museum", inaugurated in 1987. 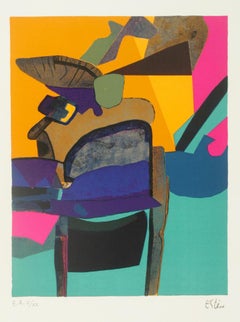 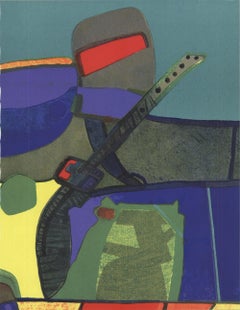 Cali - 20th Century, Maurice Estève, Abstract Print, Colourful, Lithograph
By Maurice Estève
Located in Köln, DE
"Cali" is a typical motif by Maurice Estève. The lithograph in colours was published in an edition of 100. 49,6 x 65 cm. Signed and numbered.
Category

Collages - Galerie Claude
By Maurice Estève
Located in New York, NY
Maurice Estève created this original lithographic poster to promote an upcoming show of his new series of collages at the Galerie Claude Bernard in Paris in 1974. He was known for hi...
Category

"Abstraction," Maurice Estève, lithograph, french, abstract art, ca 1950-60
By Maurice Estève
Located in Wiscasset, ME
Born in the French town of Culan in 1904, Maurice Estève moved to Paris in 1913. Estève worked as designer in a textile factory in Barcelona 1923. During his visits to the Louvre in ...
Category

Maurice Estève
Lithograph from Prints of the Mourlot Press, 1964

Find a wide variety of authentic Maurice Estève art available for sale on 1stDibs. If you are looking for art to add a pop of color to a neutral corner of your living room or bedroom, you can find work that includes elements of blue, orange, red and other colors. Browse by medium to find art by Maurice Estève in lithograph, ink, paper and more. Much of this artist's original work was created during the 20th century and is mostly associated with the abstract style. Not every interior allows large Maurice Estève art, so small editions measuring 7.5 inches across are available. Those interested in this artist might also find the works of Alfred MANESSIER, Bertrand Dorny and Charles Lapicque. Maurice Estève's art prices can vary depending upon medium, time period and other attributes. On 1stDibs, the price for these items starts at $150 and tops out at $5,526, while the average work can sell for $935.