Ossip Zadkine was a relentless, unclassifiable and prolific artist. Today, we can count more than 612 sculptures and a large number of works on paper; 765 gouaches and drawings, as well as 200 lithographs and etchings. The exhibition of his works in his Parisian studio of the rue Rousselet on May 20th, 1920, marked the beginning of a long series of shows, including more than 105 solo exhibitions during his lifetime in Europe; but also, in the United States and in Japan. Truly, a man of the world, Zadkine lived in Vitebsk, Belarus, Sunderland and London in England and Paris, Bruniquel, Les Arques in France. During the First World War, he enlisted voluntarily and was posted to the Russian ambulance corps in Champagne in 1916. During the Second World War, he fled to New York City and lived there from October 1941 to September 1945. Zadkine also traveled to many places including Belgium, the Netherlands, Greece, Italy, Japan, America, amongst others. Zadkine collaborated with many people on diverse occasions. He collaborated with architects such as Adrien Blomme, Joseph André and Hugh Maaskant; decorators such as Marc du Plantier and André Groult; poets such as Claude Aveline, Robert Ganzo, Pierre Béarn and others.  Zadkine was close to such important individuals as artists (Marc Chagall, Henry Moore, Tsuguharu Foujita, Amedeo Modigliani and others; thinkers, founders, collectors, doctors, industrialists, businessmen worldwide. He gathered his memoirs in his book, Le Maillet et le Ciseau, which he started writing in 1962.

The Fight - Original Etching by Ossip Zadkine - 1967
By Ossip Zadkine
Located in Roma, IT
The Fight is original etching on paper realized by Ossip Zadkine in 1967. Hand-signed on the lower right. Good conditions except for some foldings. The artwork represents a scener...
Category 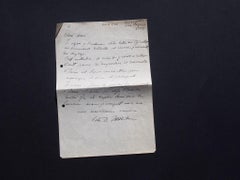 Set of 3 Autograph Letters by O. Zadkine -1950s
By Ossip Zadkine
Located in Roma, IT
Rotterdam im Aufstieg- Autographs is a heterogeneous lot, composed of 3 items, signed by Ossip Zadkine to Nesto Jacometti. Generally excellent condition, except for aging signs or ...
Category 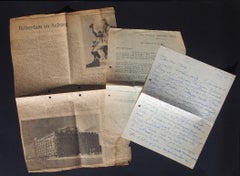 Le Guitariste - Original Etching by Ossip Zadkine - 1966
By Ossip Zadkine
Located in Roma, IT
Rare and beautiful etching on lithographic base by Ossip Zadkine, realized in 1966. Hand signed. One of 100 numbered copies on a global edition of 135 which includes also 10 artist'...
Category 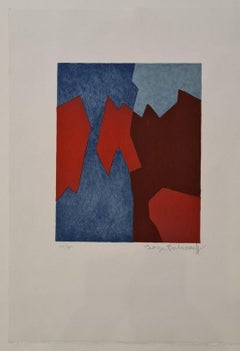 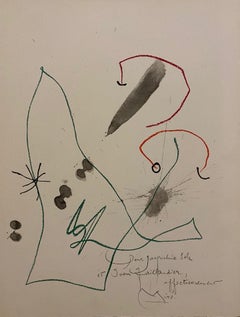 The Titan
By André Masson
Located in Paris, FR
Category

The metamorphosis of women
By André Masson
Located in Paris, FR
Category

André Masson
The metamorphosis of women , 1970

H 25.75 in. W 19.50 in.
Large Cubist Color French Lithograph Zadkine Figures Les messagers du jour
By Ossip Zadkine
Located in Bal Harbour, FL
Ossip Zadkine (Russian 1888 – 1967) was a Russian-born artist who lived in France. He is primarily known as a Cubist sculptor, but in in addition to sculpture also produced paintings...
Category