Raúl Anguiano was born in Guadalajara, Jalisco, in 1915. He started drawing Cubist pictures at the age of 5, taking as his first model movie stars, like Mary Pickford, Pola Negri and Charlie Chaplin. Anguiano’s first artistic influence or aesthetic emotion came from the Holy Family by Rafael Sanzio. At the age of 12, Anguiano attended Guadalajara's Free School of Painting under the tuition of Ixca Farias. From 1928–33, he studied with the master painter José Vizcarra, the disciple of Santiago Rebull and José Salomé Piña, and organized the group "Young Painters of Jalisco" with other artists. During this period, Anguiano worked with different kinds of models, workmen, employees and a few intellectuals like Pita Amor. In 1934, Anguiano moved to Mexico City. He began teaching in primary schools and taught drawing and painting at La Esmeralda Academy and the UNAM School of Art.

Anguiano was a member of the Mexican Artistic Renaissance movement, which started in the 1920s by the Mexican School of Art to which he belonged. This renaissance began with the San Carlos Academy movement, among whose leaders were Ignacio Asúnsolo and Jose Clemente Orozco. It emerged out of the students' and teachers’ discontent with the traditional painting methods (academicism), and the close contact that the young artists had with the problems of Mexico and its people, which explains the marked critical realism to the painters of the time, including Anguiano himself. The same year, Anguiano received a commission to paint his first mural, Socialist Education, a 230-foot fresco located at A. Carrillo School in Mexico City. Other works followed, including Mayan rituals (oils on canvas and wood), for the Mayan Hall in the National Museum of Anthropology and Trilogy of Nationality (acrylic on canvas and wood), for the Attorney General's Office. In 1936, he moved into his Surrealist period, which lasted almost a decade. He painted circus performers and sex workers. The most notable among his works of the time are “The Madame” (gouache, 1936), “The Clown's Daughter” (oil, 1940), the “Pink Circus Artist” and the “Grey Circus Artist” (oil, 1941). Also, during this period, Anguiano produced a series of drawings based on his dreams, with cold tones and silver-greys predominating.

In 1937, Anguiano joined the Revolutionary Writers and Artists League. Together, with Alfredo Zalce and Pablo O'Higgins, he was also a founding member of the Popular Graphics Workshop, where artists practiced a graphic style based on Mexico's folk traditions. This was due to the powerful influence of José Guadalupe Posada and Goya. Raúl Anguiano belonged to the so-called "Third Generation" of post-revolutionary painters, along with Juan O'Gorman, Jorge González Camarena, José Chávez Morado, Alfredo Zalce, Jesús Guerrero Galván and Julio Castellanos, all known for being unorthodox, associated in politics and art, while at the same time, holding to certain traditional canons. Anguiano's work is viewed as an expression of its time because of its undeniably Mexican flavor, and the link to his people is clear, not only in his murals but also on canvas, etchings, pencil and ink drawings, lithographs and illustrations, and additionally, in sculpture and ceramics. Without compromising his personality or ethnic roots, and at the same time not allowing them to limit him, Anguiano has vindicated and taken advantage of the principles of modern art, giving him a universal and transcending character of his boundary work.

Anguiano held his first solo exhibition, entitled "Raúl Anguiano and Máximo Pacheco," at the Palace of Fine Arts in Mexico City, in 1935. In 1940, he took part in his first collective exhibition "Twenty Centuries of Mexican Art.” These were followed by more than 100 shows in many countries such as Cuba, Chile, Colombia, Brazil, the United States, France, Italy, the former Soviet Union, Israel, Germany and Japan. His exhibitions include the presentation of a series of four-color lithographs, held at the Hall of Graphic Arts SAGA 88, from 1989–90, in Paris; and the retrospective look at Anguiano's work in graphics (1938–40), held at the National Print Museum in Mexico City in 1990. In 1982, Anguiano became a member of Mexico City's Academy of Arts, and since 1993, he was also the Creator Emeritus of the National System to the Creators of Art.

" Ballet " Raul Anguiano original etching 1970
By Raul Anguiano
Located in Gunnison, CO
Ballet is a black and white etching of a ballet dancer performing a modern dance. Raul Anguiano ( 1915 - 2006 ), born in Guadalajara, Mexico was a painter, a muralist , printmake...
Category 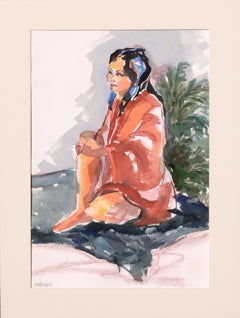 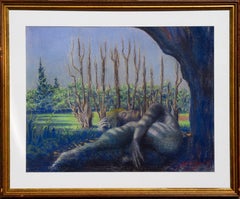 Falling Out of Red
By Genevieve Rogers
Located in Soquel, CA
Category

Figure Painting in the Studio
Located in Soquel, CA
Category

genevieve-rogers-2
Figure Painting in the Studio, 1960

Raul Anguiano
Portrait of a Girl in Green, 1966