Sir Francis Seymour Haden was an etcher, collector and surgeon, born in the UK in 1818. He studied at the Derby School, Christ's Hospital and University College in London. He also studied at the medical schools of the Sorbonne in Paris and Grenoble. He became a member of the Royal College of Surgeons in 1842, and he was made a fellow in 1857. He was an honorary surgeon to the Department of Science and Art from 1851–67 and in 1847, he settled into private practice. Haden was a vice-president of the obstetrical society of London and one of the founders of the Royal Hospital for Incurables in 1850. In 1858, Haden encouraged James McNeil Whistler to work from nature and consequently, Whistler dedicated his first set of etchings entitled French Set, to Haden. The etchings were printed by Auguste Delâtre in Paris and marketed, with some help from Haden, in London. In 1859, Whistler settled in London and often visited Haden's Sloane Street home. Haden became the president of the Society of Painter-Etchers, and he was partly responsible for the Rembrandt exhibition at the Burlington Fine Arts Club in 1879. His published works include The Etched Work of Rembrandt (1879), The Art of the Painter-Etcher (1890) and the Royal Society of Painter-Etchers (1891). In 1891, he was elected a member of the Athenæum and in 1894 his public service was rewarded with a knighthood. In 1905, his distinction was recognized abroad by honorary membership of the Institut de France, the Académie des Beaux-Arts and the Société des Artistes Français. He was awarded medals for etching at the Expositions Universelles in Paris in 1889 and 1900.

Seymour Haden
A Sunset in Ireland., 1863

A River Bank
By Seymour Haden
Located in West Hollywood, CA
Presenting an original etching by British artist Seymour Haden. Haden was the brother in law of American artist Whistler, and specialized in detailed etchings. "A River Bank", ...
Category 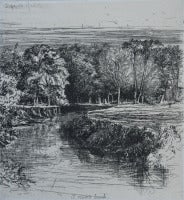 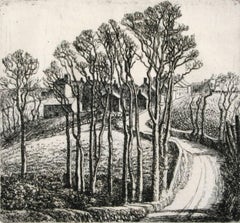 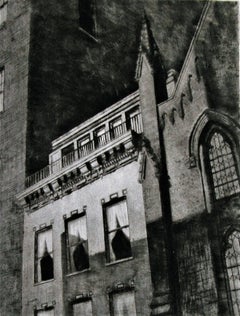 Demolition No. 1
By Armin Landeck
Located in Storrs, CT
Category

Wood Above the House.
By Eleanor Mary Hughes
Located in Storrs, CT
Category

Previously Available Items
A Sunset in Ireland
By Seymour Haden
Located in Fairlawn, OH
Signed by the artist in pencil lower right; Signed in the plate lower left corner References And Exhibitions: This image was included in Haden's "Etudes a l'eau-forte" Printed on ...
Category

Seymour Haden
A Sunset in Ireland, 1863