Tom Perkinson, born in Indiana in 1940, has become distinguished as a regional painter, known for his work grounded in the visually dramatic landscape of the Southwest. As a child, Perkinson discovered he had a love for the natural landscape and a talent for art. He fostered that talent through classes at the John Herron Art Institute in Indianapolis and then at the Chicago Art Academy upon graduating from high school. He received a degree in art from Oklahoma Baptist University in 1964, before moving on to graduate school at the University of New Mexico. Here, he continued to paint the landscape and it was this work that began to reflect a new fascination with the Southwest. He had found what would become an infinite source of inspiration. Influenced by early painters of the southern Indiana landscape, painters like T. C. Steele, Vawter, Schultze and Forsythe, Perkinson’s early work focused on landscape, still life and city scenes. As his love of the New Mexico landscape grew, his work matured, finding influence in J.M.W. Turner, George Inness and James Mcneill Whistler. Soon, a distinctive, sprung-from-the-imagination style he came to describe as romantic realism began evolving. “None of these places exist”, he says, “I just make them up as I paint them." It was this preference for spontaneity that led to watercolor as his preferred medium. After more than four decades now as an artist painting New Mexico, Perkinson has built a prolific career. His work is included in private and public collections across the globe and he is represented in the collections of many museums, including the Museum of New Mexico in Santa Fe, the University Art Museum in Albuquerque and the Eiteljorg Museum of Western Art in Indianapolis. His work is also included in the May 2006 book titled Landscapes of New Mexico, Paintings From the Land of Enchantment. He currently resides in Corrales, New Mexico, where he has lived for 20 years with his wife, renowned jewelry artist Louise Perkinson.

(Biography provided by California Fine Art Brokers)
Applied Filters3 results
Creator:Tom Perkinson
3
to
3
Item Location
3
3
3
1
2
3
3
3
3
3
25
5,206
2,193
1,589
1,498
"Shallow River" Pastel Painting by Tom Perkinson
By Tom Perkinson
Located in Wiscasset, ME
Painting is essentially unframed and in excellent condition. Tom Perkinson was born in Indianapolis, Indiana in 1940. He was raised in the country and developed a love for the natura...
Category 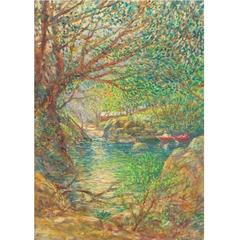 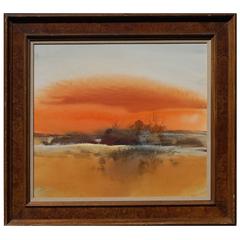 "Industry Along the River" by Joseph Wolins

"On the Banks of the River" by Gustave Castan
Located in Wiscasset, ME
Category

"On the Banks of the River" by Gustave Castan

Previously Available Items
The Stables" Painting by Tom Perkinson
By Tom Perkinson
Located in Wiscasset, ME
Oil on panel Tom Perkinson was born in Indianapolis, Indiana in 1940. He was raised in the country and developed a love for the natural landscape. He discovered that he had a tale...
Category

The Stables" Painting by Tom Perkinson

H 24 in. W 36 in. D 2 in.
"A Shark in the Sky" Painting by Tom Perkinson
By Tom Perkinson
Located in Wiscasset, ME
Tom Perkinson was born in Indianapolis, Indiana in 1940. He was raised in the country, and developed a love for the natural landscape. He discovered that he had a talent for art whil...
Category 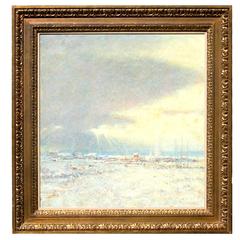 "A Shark in the Sky" Painting by Tom Perkinson

The Tom Perkinson furniture is available for sale on 1stDibs. There are many options in our Tom Perkinson Furniture collection, although brown editions of this piece are particularly popular. In-stock we have 3 vintage editions of these items, while there is also 0 modern edition to choose from. Many customers also consider furniture by Italo Botti Furniture, Francesco Scavullo Furniture and Richard Faralla Furniture if you are looking for additional options. Prices for Tom Perkinson furniture can vary depending on size, time period and other attributes. Priced at $1,600 on 1stDibs, these items top out at $2,500, while pieces like these can sell for $1,700 on average.