Many early 20th century art critics considered Walter Elmer Schofield to be one of the most daring innovators among American Impressionist landscape painters. Schofield was quoted in International Studio magazine in February of 1913, saying, “Zero weather, rain, falling snow and wind; all these things to contend with only make the open-air painter love the fight.” Schofield was born in Philadelphia on September 10, 1867, the son of a prosperous businessman. He attended classes at the Pennsylvania Academy from 1889 to 1892, under Thomas Anshutz. While there, he frequented the Tuesday night open houses that Robert Henri held at his studio. There, close friendships developed with Henri, Edward Redfield, William Glackens, Colin Campbell Cooper, Augustus Koopman, Charles Grafly and John Sloan. Schofield left in 1892 to enroll at the Académie Julian in Paris, where he studied under William Bouguereau, Gabriel Ferrier and Henri Lucian Doucet. In 1896, Schofield met and married an English girl by the name of Murielle Redmayne. In 1901, they moved to St. Ives in Cornwall. Although Schofield established his residence in England, he made annual trips to the United States where he usually resided from October through April. He spent much of his time painting his famed Pennsylvania snow scenes, when not attending to obligations at galleries and art institutions.

The majority of Schofield’s work depicts the coastal fishing villages of Cornwall and Devon, their rolling hillsides, rocky coasts and clusters of cottages made for desirable subjects. His stately manor house in Cornwall, called Godolphin, with its rich grounds, lily pond and formal gardens, also provided the artist with idyllic scenery to paint. Often compared to his contemporary, Edward Redfield, a competitive rivalry developed between the two artists. A frequent visitor to Redfield’s home in Bucks County, Schofield became convinced that painting large canvases outside, with bold, rapid brush strokes was the direction he wished to follow. By 1904, animosity had developed between the two artists and their friendship cooled. During his lifetime, he garnered many awards, medals and prizes. His exhibition record includes the Pennsylvania Academy of the Fine Arts (1903 Gold Medal and 1914 Gold Medal), the Paris Salon, the Philadelphia Art Club (1898 prize). the Society of American Artists (1900 prize), the “Paris Exposition” (1900 prize), the National Academy of Design (1901 prize, 1911 Gold Medal, and 1920 prize), the “Pan-American Exposition” in Buffalo, the Carnegie Institute (1904 Medal), the “St. Louis Exposition” (1904 Medal), the “Corcoran Gallery Biennials” (1926 Silver Medal), the Art Institute of Chicago (1921 prize), the National Arts Club (1913 Gold Medal and prize), the “Panama-Pacific Exposition” in San Francisco (1915 Silver Medal) and the “Sesquicentennial Exposition” in Philadelphia (1926 Silver Medal). His work is in the permanent collections of the Metropolitan Museum of Art, the Woodmere Art Museum, the James A. Michener Art Museum, the Corcoran Gallery of Art, the Cincinnati Art Museum, the Carnegie Institute, the Albright Art Gallery in Buffalo, the Pennsylvania Academy of the Fine Arts, the Art Institute of Chicago, the Luxembourg Museum in Paris and the National Museum of American Art at the Smithsonian Institute, among others. 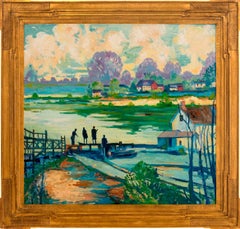 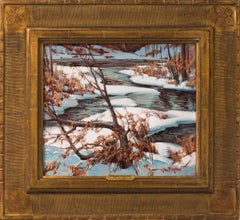 "Note of the City"
By Robert Spencer
Located in Lambertville, NJ
Category

H 30 in. W 38 in.
"The Inner Harbor, Polperro"
By Walter Elmer Schofield
Located in Lambertville, NJ
Jim’s of Lambertville is proud to offer this artwork. Signed and dated lower right. Complemented by a hand carved and gilt frame. Illustrated in "Schofield: International Impress...
Category