William Baptiste Baird was a well-known American painter of landscapes and genre scenes, who lived and exhibited almost exclusively in France and England. Born in Chicago in 1847, Baird began his professional artistic career in 1866 as a draftsman for a wood-engraver. At the same time, he studied painting and exhibited several of his small works in storefront windows. Baird’s inherent talent and his nascent career as a local artist caught the attention of two Chicagoan philanthropists, Mr. W. B. Howard and General John M. Corse, who provided the funds for Baird to travel and study in France for three years. Baird settled in Paris and studied at the studio of the Academic history painter Adolphe Yvon, whose monumental nationalistic military scenes were favored by Emperor Napoleon III during the Second French Empire. He began exhibiting at the Salon in 1872 with a historically themed genre scene entitled, Le retour du prisonnier (i). Baird quickly found much professional success in France, continuing to exhibit at the Salon for the next 20 years, especially peasant genre scenes and landscapes depicting the rural areas outside of Paris, such as the village of Barbizon and the Forest of Fontainebleau. Baird was a very versatile artist, and although he is known for his Barbizon-style landscapes and peasant genre scenes in France, the artist also exhibited in London and the United States. From 1877 to 1899, Baird exhibited Victorian-themed domestic genre scenes at the Royal Academy of Arts, including titles such as The Cares of a Family, “Catch me if you can,” Take Care! and Taking Life Easy. During the same years, he exhibited in Paris and London, Baird also participated in annual exhibitions in the United States. At the National Academy of Design in New York and Pennsylvania Academy of the Fine Arts in Philadelphia, Baird exhibited pictures of cattle and poultry and cock-fighting scenes. These animal paintings were coveted by American collectors, including the Philadelphian Harrison Earl, who owned a series of five cock-fighting pictures. By 1879, Baird had settled into a studio in Paris at 3 rue d’Odessa in the neighborhood of Montparnasse. He last exhibited at the Salon and the Royal Academy of Arts in 1899 and died in Paris that same year. His artworks are a part of the collections at the Metropolitan Museum of Art, New York; the Crocker Art Museum, Sacramento, California; the Lightner Museum, St. Augustine, Florida; the Maryland Institute College of Art, Baltimore; the Sheldon Swope Museum, Terre Haute, Indiana; the Strong National Museum of Play, Rochester, New York; the Wright Museum of Art, Beloit College, Wisconsin; the Tweed Museum of Art, University of Minnesota, Duluth, Minnesota and the Wadsworth Athenaeum Museum of Art, Hartford, Connecticut.

French 19th century River landscape, with cottage , punt and Wear
By William Baptiste Baird
Located in Southport, CT
French 19th century River landscape, with a cottage , punt, and Wear William Baptiste Baird was born in Chicago, moving to Paris in the 1870s where he spent most of his working life...
Category

French chickens in a landscape with chicks
By William Baptiste Baird
Located in Southport, CT
William Baptiste Baird was born in Chicago, moving to Paris in the 1870s where he spent most of his working life. He exhibited both in Paris, at the Salon des Beaux Arts and at the R...
Category

William Baptiste Baird
French chickens in a landscape with chicks, 1900 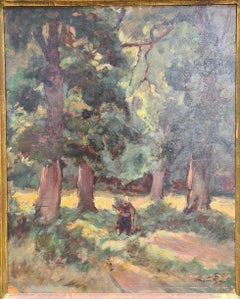 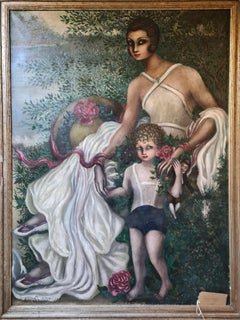 Linden Tree In A Landscape
Located in Cotignac, FR
Category